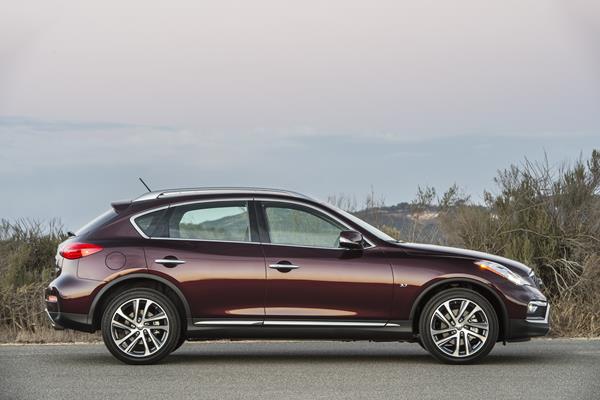 The QX50 is a five-seat premium-level compact crossover with seating for five. There is one trim level and several package options for the CUV. Most of the updates are centered on the longer wheelbase of the QX50, which gains more than four inches in stretch. Other updates are relatively minor, including now-standard LED daytime running lights, a sunroof, and heated front seating.

Although Infiniti is calling the 2016 QX50 "new," this update is a midcycle refresh rather than a full redesign of this venerable crossover. That doesn't mean it's outdated, however, as the major upgrade made was to improve rear seat legroom - something the previous renditions of this model sorely needed.

The Infiniti QX50 has always been known for its sporty drive dynamic and beautiful saloon styling. That has definitely not changed, and we're glad for that. The QX50 may have its down sides in comparison to others on the market, but there are some definite upsides as well. These are the points our overall scoring will reflect. 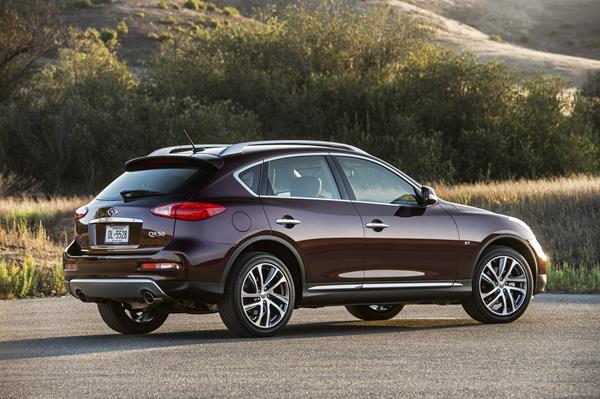 From the outside, the 2016 QX50 is largely unchanged from earlier renditions of the vehicle. This might sound like a bad thing, with the current rendition being six years old, but the timeless class that the Q50 has in its styling will look good a decade from now as well. This is a great-looking crossover with a classic saloon styling that is almost ageless.

That style begins with the understated mesh grille on the front fascia, below which a chrome-edged intake opens at an angle. Beside the grille are headlamps that flow up into the fenders in simple, angled elegance. The fenders have little bulging, flowing discreetly upwards and around to create the beginning of the beltline across the QX50. A curved, stylish hood with a hint of a crease down its center rounds towards the windscreen in a long flow.

The sides have curved belts that dip into the door at the seam before rising upwards to begin the rear fender and its sportier haunch. A tapering roofline and uprising greenhouse with a cut into the rear pillar for a Euro-curve make the hatchback look more fastback in appearance. Simple adornments on the wheel wells and a spoiler above the rear hatch finish the overall sporty saloon nature of the QX50. 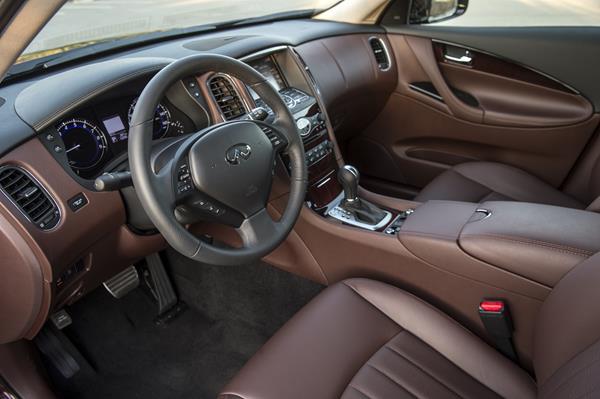 For the 2016 model year, the greatest improvement that the Infiniti QX50 sees is in its rear seating. The lengthening of the chassis was all about adding rear seat legroom - over four inches of it, making the rear seats adult-friendly. That was a well-deserved complaint from the 2015 model that we are glad to see addressed here.

Despite this marked improvement, much of the other worries that the dated interior of the QX50 has remains. Cargo space is abysmal at only 16.6 cubic feet with the rear seats up and 50.1 with them folded down flat. There is no power liftgate option for the QX50 and the load area, while flat-floored, is cramped to the sides and above because of the Infiniti's sporty design.

We are impressed with the high level of materials quality within the Infiniti QX50 and the well-done interior layout. Some design elements, such as the heavier dash look, are becoming dated, but not so much so that they're serious detriments to the interior experience. The 7-inch touchscreen and short length of the steering wheel's telescope are downers here.

In the rear, seating is high and well-bolstered, a surprise for a crossover of any class. It's also nicely-cushioned and has more headroom than most might expect, given the taper of the Infiniti's roofline. We also like the high door sills and the carrying of the multi-toned interior materials layout to the rear, another premium touch. 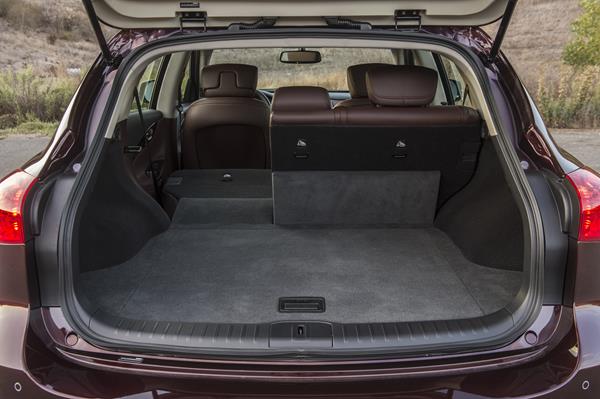 Technology is one front where the Infiniti QX50 has definitely failed to keep up with the times. We are disappointed that a premium-level vehicle like this doesn't include parking sensors as standard equipment and doesn't even have the option of Bluetooth audio streaming or a larger touchscreen. The standard touchscreen is only 7 inches and is set deeply into the dash, making use of the command knob in front of it almost mandatory in most situations. We are glad to see some driver convenience and safety options added, including adaptive cruise control.

Most of the upgrades within the 2016 Infiniti QX50 are in options packages and there are few, if any, standalone options for upgrade. These packages can be spendy, but most will likely want to move forward from the nicely-equipped, but low-priced and rather minimal (for the segment) base model. The most advanced upgrade option is the surround-view backing/parking system and the addition of navigation. Most other tech updates involve stereo upgrades.

Although the premium segments aren't generally known for a concern with fuel economy numbers, the 2016 QX50 does return some of the lowest in its segment. The overall rating, whether a front-wheel or all-wheel drive model, is 20 mpg combined. The FWD option is rated at 17 mpg in the city and 25 mpg on the highway. The AWD model at 17 and 24 respectively.

In the real world, most can expect lower numbers than those with our week in the QX50 seeing an average of 18 mpg in a highway-heavy driving mix at high altitudes. 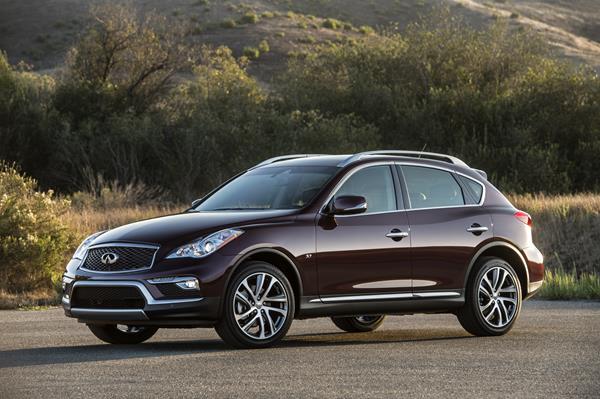 The 2016 Infiniti QX50 has an "About Average" rating from the J.D. Power and Associates Vehicle Dependability Study results. This coincides with its expected reliability rating and is historically what the QX50 has been rated since its introduction in 2008.

There have been no safety recalls on the 2016 QX50 as of the time of this writing.

The 2016 QX50 has received only minimal crash testing, but has options that include the advanced safety equipment expected of today's premium-level vehicles. The Insurance Institute for Highway Safety has thus far only published results from a moderate overlap front test and a rear crash test, both of which received top scores of "Good." the National highway Traffic Safety Administration has only published rollover test results, which received four out of five stars - average for the segment. 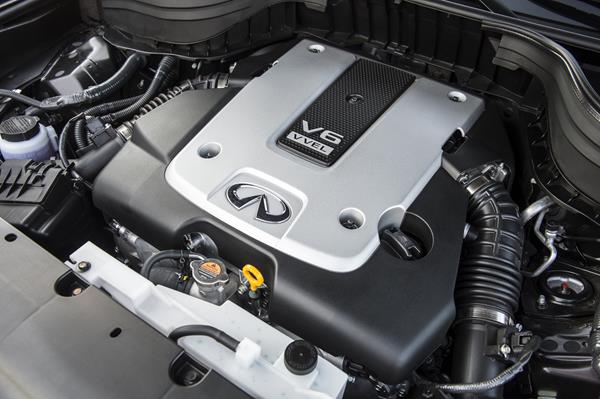 Few premium level crossovers can match the sportiness and on-road excellence that the Infiniti QX50 offers. It's slightly overpowered 3.7-liter V6 outputs 325 horsepower and 267 pound-feet of torque into a well-tuned seven-speed automatic transmission. Rear-wheel drive is standard and all-wheel drive is optional.

A tight chassis and beautifully tuned suspension add to this power with a performance bent that doesn't skimp on road absorption, mating sports-level driving dynamics with a premium ride quality that is very well balanced. Responsive steering and a fast pace to the QX50's overall road feel really makes it an engaging drive. More so than most any other crossover in this class. The honest acceleration and power from the V6 is a bit slower paced than some turbocharged options on the road, but really feels strong and capable for the long-haul when pressed.

Among premium-level and entry-level luxury crossovers in this class, the 2016 Infiniti QX50 remains one of the lowest priced in the segment. A well-equipped QX50 has a lower manufacturer's suggested retail price (MSRP) than most of its competition, making it a compelling option for those looking to get a luxury crossover without the premium cost.

This very low price point - often three or four thousand dollars lower than the competition - can make the shortcomings of the Infiniti QX50 looks very palatable. Considering the high quality of the interior, the excellence of the drive, and the premium looks that the QX50 has, we don't blame anyone for that. 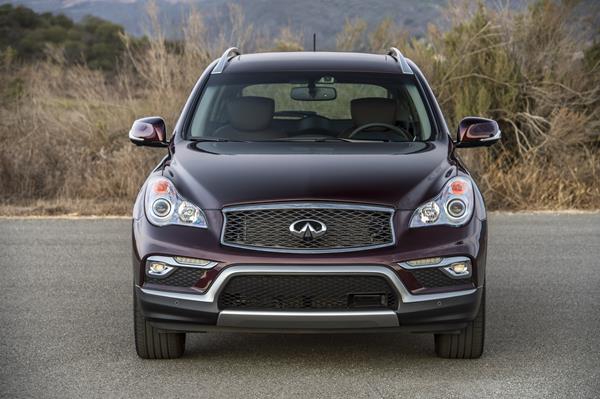 Competition in the premium crossover segments is fierce, but the QX50 holds itself well against competitors with a combination of low entry level pricing and excellent drive dynamics. The closest competition in terms of the latter would be the BMW X3 or the Audi Q5, both of which are equally as sporty and have more of everything else to boot. They also cost more. The Acura RDX is not as nimble on the road, but has much more to offer in terms of spaciousness and ergonomics, making it a popular choice.

In the end, we believe that the compelling price point and fast-paced drive of the 2016 Infiniti QX50 are its primary selling points. Both of these, along with its near-timeless exterior look, are excellent reasons to choose this Infiniti.