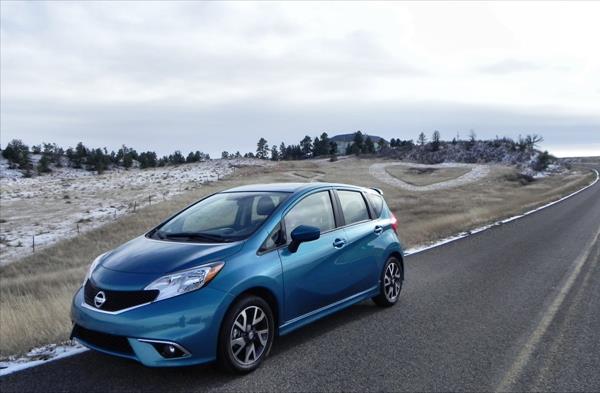 Overview (Final Score: B+)
There are a lot of entries in the low-cost, value-centric compact hatchback market. Some offer sporty drives, other a lot of interior versatility, and some pile on the technology options. The 2015 Nissan Versa Note offers a strong mixture of fuel economy, versatility, technology, and value pricing that few in the segment can rival.


What We Loved About the 2015 Nissan Versa Note


What We Didn't Love About the 2015 Nissan Versa Note 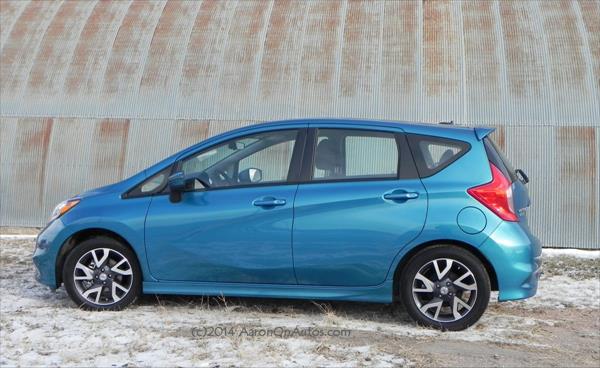 Exterior View (8/10 relative to market)
The 2015 Nissan Versa Note is, at its base, a five-door hatchback and making an entry-level hatch look good is not an easy feat. Nissan does a good job with the Versa Note, however, bringing a sporty look and almost upscale appeal to this little low-cost ride.

It begins at the front, where a long nose and curved fascia flow upwards to the sharply raked windscreen that begins the cabin. Flares at the fenders and accent lines along the edges of the hood accentuate the wide headlamps that flank the thin grille. Upper trim levels add chrome edges to these points for more bling.

Along the sides, small "vent" mirrors ahead of the doors, a strong body line beginning at the center of the front door to run along and upwards to the rear taillamps and a beveled running board stamp along the bottom create a body flow. This flow follows and meets the sloping roofline and upward-swinging belt line that creates the overall "pinch back" sport look of the Versa Note.

At the rear, a spoiler sits atop the hatch, which itself has rounded rear glass atop an hourglass-shaped hatch whose center is pinched by the taillamps at either side. The bumper comes out with small cutouts on its flanks for a fast paced look as the rear fascia.

The general look is more complex and busy than might be expected in this entry-level market. Until recently, the low-end market has featured a lot of plain slabs and simple adornment, often added as an afterthought. The great look of the 2015 Versa Note is a testament to how far this segment has progressed forward and as the best-seller on offer here, we can see where that comes from. 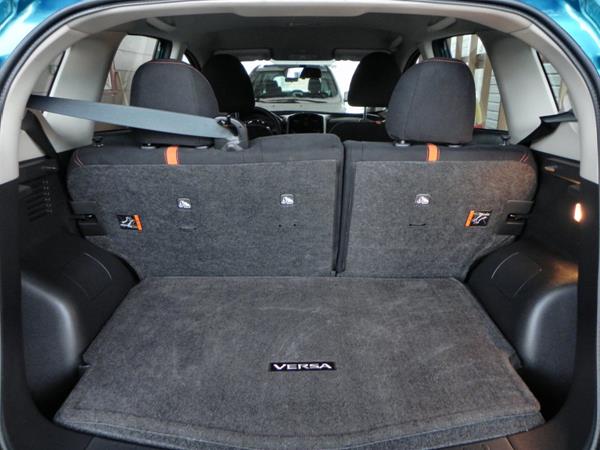 Interior Comfort, Quality, Ergonomics (8/10)
Despite the Versa Note being a basic, entry-level compact car, it is surprisingly roomy and more comfortable than most might expect. Materials quality is as good as can be expected, though a lot of hard plastics and plain adornments make up the bulk of the 2015 Versa Note's interior.

The front seats are comfortable, if a bit hard, and offer adequate adjustment options for most people to find comfort. Taller drivers may find it a bit awkward due to the steering wheel's lack of telescope and the odd lumbar curve of the seating (not adjustable). Driver's controls and ergonomics are good, though, with instruments being clearly visible and all controls within easy reach.

The rear seats are likely the best in this class, with more room for adults than any other car we can name in this segment. Even tall passengers will find the back seat usable and could even call it comfortable thanks to ample head, leg, and hip room.

The other high point of the 2015 Nissan Versa Note is its cargo space and the versatility it offers. With all seats up, a solid 18.8 cubic feet is offered, with a wide-opening rear hatch and flat floor. Folding the rear seats, which lie flat, a total of 38.3 cubic feet is given. As an added bonus, the floor of the Versa Note's cargo space lifts to reveal a roughly three inch space where valuables like purses, laptop bags, etc. can be stashed. This cover can be removed as well, allowing for a little extra room for taller objects in the rear. 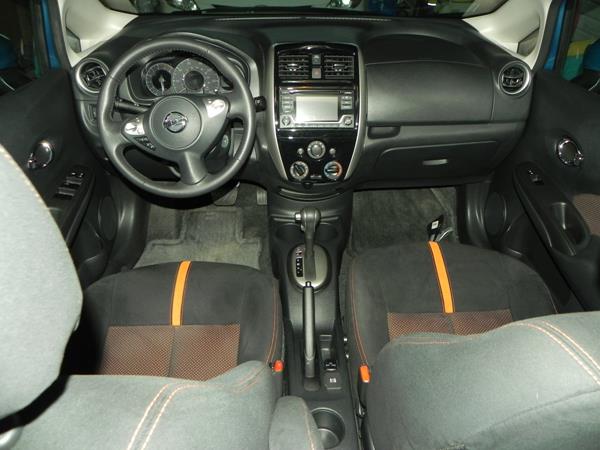 Technology (9/10)
Although no one who buys a 2015 Versa Note is going to write home to enthuse about its high technology, when the top-most offering is compared to its peers, it shines. In the mid-level SV trim, keyless entry and ignition are standard equipment, unlike with many competitors. Add in some higher-end offerings in the upper trims or as add-ons and there is a lot going on in the little Versa Note.

A five-inch touchscreen centers those upper trims, adding a rearview camera, satellite radio, a USB and iPod jack, and smartphone app integration through NissanConnect. The latter comes with Mobile Apps which allows the user to integrate their smartphone with the car's LCD screen to add a lot of options for the Nissan Versa Note's infotainment.

In the top-most SL trim, which rings in at about $21,000 or so, we find a larger touchscreen (5.8-inch), navigation, heated seating and side mirrors, and Nissan's unique AroundView 360-degree parking camera system.


Fuel Economy (9/10)
Few in this segment can boast better fuel economy than the 2015 Versa Note achieves. The base model with its manual transmission achieves a 30 mpg combined rating from the EPA (27 in the city, 36 on the highway). With the CVT that comes with the rest of the Versa Note's trim points, though, fuel economy jumps to an impressive 35 mpg combined, with 31 mpg in the city and 40 mpg on the highway.

In a week of driving in unusually cold weather at high altitude, we managed 33 mpg combined after 100 miles of mixed driving in a 2015 Nissan Versa Note SR. 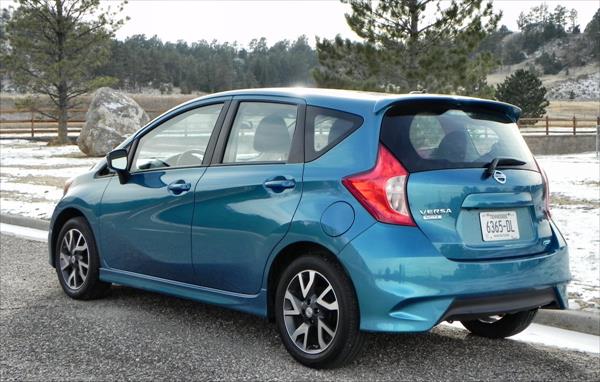 Predicted Reliability, Initial Quality Ratings (6/10)
As an entry-level car, we'd expect the Nissan Versa Note to be at least average in reliability, but J.D. Power and Associates give it a low rating there with only two out of five points. We do note, however, that the Versa has seen no safety recalls and has a reputation for reliability in its mechanicals with most complaints being in trim and accessories rather than drivetrain. So while we rate the 2015 Nissan Versa Note low overall, we consider it at least average for the segment when all is told.


Safety (7/10)
The 2015 Versa Note has a moderate amount of standard safety equipment. The National Highway Traffic Safety Administration gives the 2015 Nissan Versa Note an overall rating of four out of five stars. This includes three stars for overall frontal crash safety and five for side crash and four for rollover.

The Insurance Institute for Highway Safety has only published a rating for the moderate front-overlap crash test, for which the Versa Note received a top rating of "Good."


Performance (7/10)
Performance and acceleration are definitely not the high points of the 2015 Versa Note. This little Nissan is about efficiency and versatility, not excitement on the road. Powered by a 1.6-liter four-cylinder engine producing 109 horsepower and 107 pound-feet of torque, the Versa Note has just enough umph to get there, but not enough to give any thrill. Efficiency is further marked by the continuously variable transmission (CVT) that accompanies all but the base model S with its five-speed manual transmission. Front-wheel drive is the norm for the Versa Note.

Around town, the Versa Note shines as a maneuverable, almost peppy little drive that offers a lot of visibility to the driver. Parking is a breeze and the small package moves nimbly in traffic and through the parking lot.

Out on the road, the 2015 Nissan Versa Note is a harsh ride on rough pavement and can be a little noisy on the highway, but compared to others in the segment, it's about par. As a versatile Point A to Point B car, the 2015 Versa Note is excellent, though, offering solid "get there" attributes that most will find appealing. For a car priced in the $15,000 range, you can't ask much more. 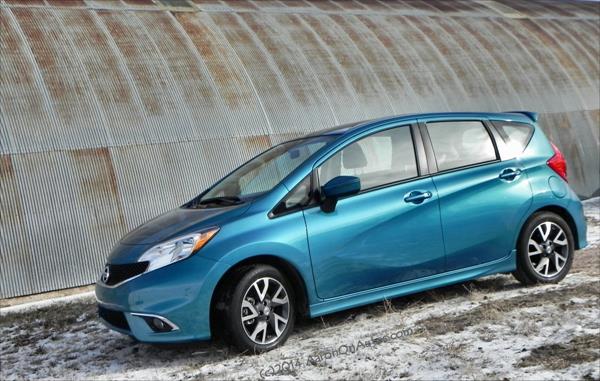 Pricing and Value (10/10)
Perhaps the strongest offer that the Versa Note brings to the table, aside from its versatile nature, is its very low price of entry and generally high value proposition for the entry-level new car buyer. As the best-selling compact hatchback in the segment, the 2015 Versa Note must have something going for it.

The beginning MSRP for the 2015 Versa Note is about $14,000 at its base level with most buyers landing somewhere in the $16,000 or so range in a mid-level trim. The base model Versa is very, very basic, but in the SV trim and above, a lot of value is added with standard equipment including everything a buyer in this segment would expect from a new car plus upgrades like a six-way adjustable driver's seat, cruise control, leather-wrapped steering, along with the expected Bluetooth connectivity and basic stereo system. For most drivers, this is plenty of goods for the money spent.


Total Score and Competitive Comparison (64/80, 80%)
The 2015 Nissan Versa Note is the hatchback half of the best-selling Versa compact entry-level car duo that Nissan uses to dominate the market. The Versa Sedan and Versa Note split sales totals roughly down the middle between them. Of the two, the 2015 Versa Note offers the more versatile package whereas the Sedan offers a more lowball-oriented price point.

The 2015 Versa Note faces several rivals, of course. Chief among those is the Honda Fit, which offers a similar price package when comparable trim points are given. With a bit more cargo space and a higher reputation for reliability, the Fit should definitely be cross-shopped with the Versa Note.

Another strong rival is the Ford Fiesta, which is more fun to drive with a pepper engine offering. Similarly, the Chevrolet Sonic is also sportier. Neither of these compare in price and interior space, however, though fuel economy is excellent in all of the rivals we've named here.

In the end, though, the overall package of the 2015 Nissan Versa Note is an excellent value for those looking for a value-oriented, fuel efficient, A to B car.