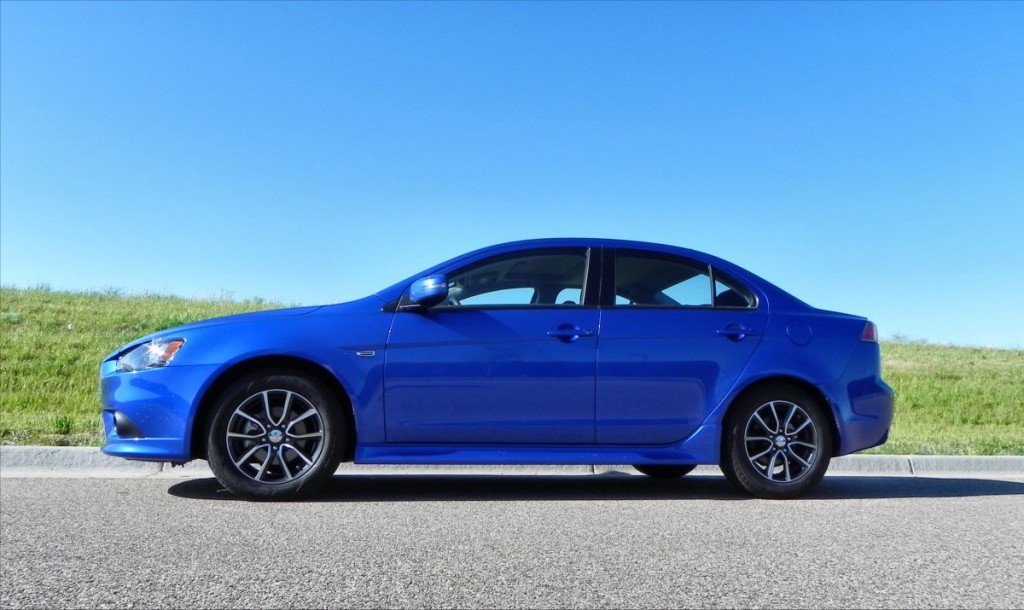 Overview (Final Score: B)
The 2015 Mitsubishi Lancer is a mixed bag offering. It's one of the only cars in the compact class to offer all-wheel drive and the only one to do so with a respectable overall package of price and performance.

The Lancer is the oldest compact on the market, however, now entering its eighth year of production in this generation. This shows in the car's interior and its lack of refinement in comparison to newer, more updated rivals. Despite being long in the tooth and having a lackluster interior experience, though, we found the 2015 Lancer to be a surprising overall package for the segment. This might come as a shock to some shoppers who've overlooked the Lancer in favor of newer rivals. 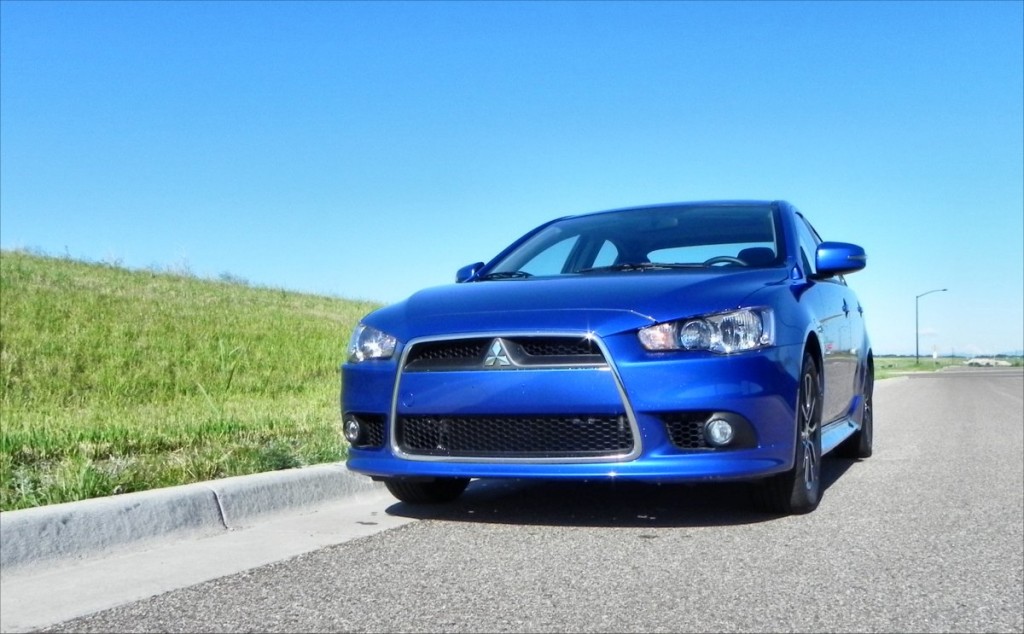 What We Loved About the 2015 Mitsubishi Lancer


What We Didn't Love About the 2015 Mitsubishi Lancer 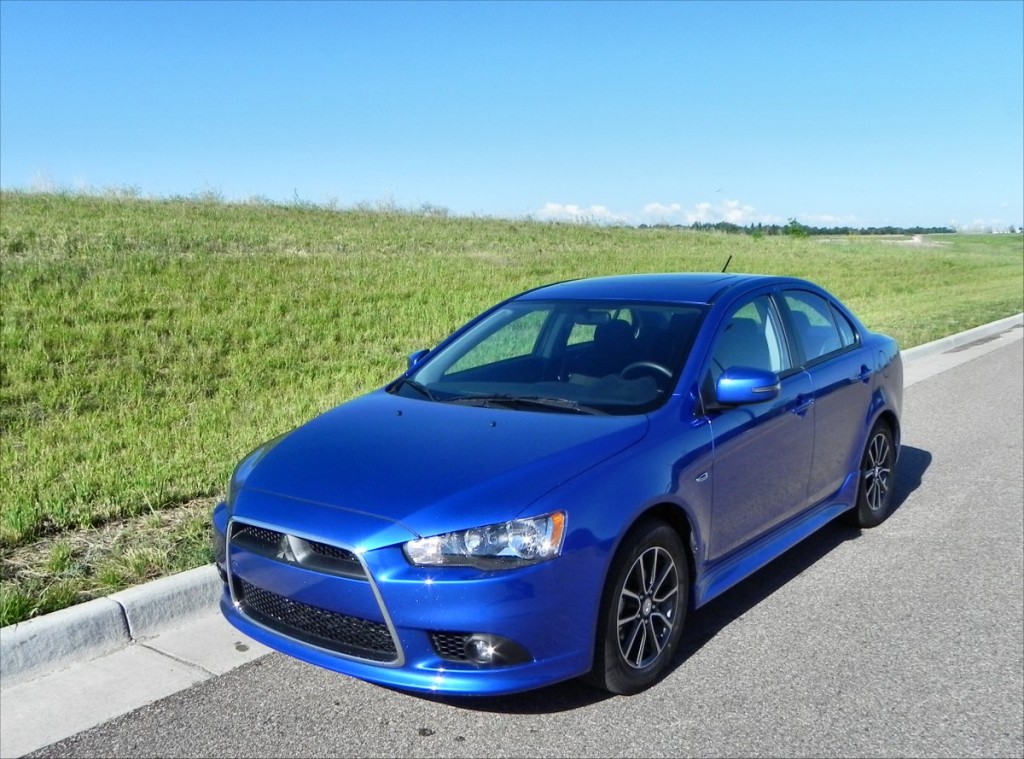 Exterior View (8/10 relative to market)
The 2015 Lancer hasn't seen a serious update since 2008 and so it's beginning to show some age. Even so, it's a good looking little car and though it may not have the refinement or eye-grabbing details that some of its competitors do, the Lancer does have a solid appeal to it. Some of the design elements are still relevant today, despite being over a generation old, which proves out the car's longevity.

A wide-mouthed front fascia and low grille, now common on sedans and coupes, is overlooked by peering headlamps that give an aggressive look to the front end. In 2008, that was a show-stopping look. Today, it's what everyone is doing, making the Mitsubishi Lancer more contemporary than it was before. Strong hood lines and a raked windshield enter the curved, fast-paced roof to complete the aggressive sports car stance the 2015 Lancer has.

The bodywork is simple, with only light curvature aimed at accentuating both the pinched-in waistline at the door sills and the slippery feel the car creates overall. Tapering rear quarters and a clipped deck lid finish that impression.

Everything about the 2015 Mitsubishi Lancer says "race car roots." That is probably why this car, aged as it is, still holds a lot of curb appeal for the onlooker. 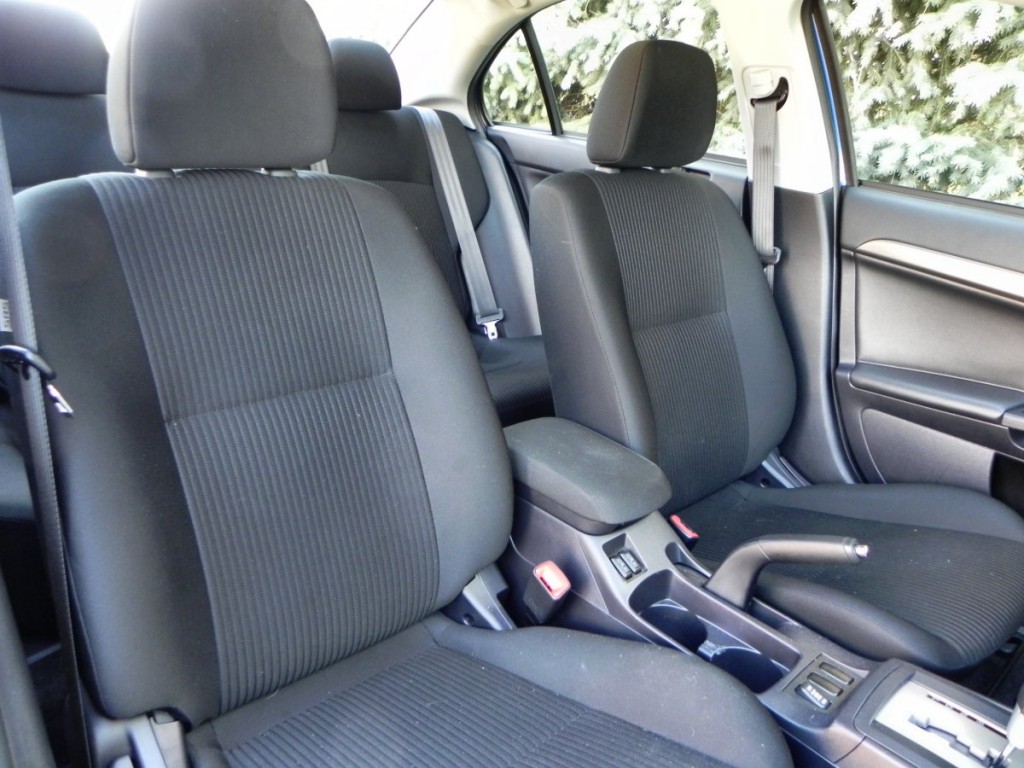 Interior Comfort, Quality, Ergonomics (6/10)
The interior of the 2015 Lancer is where the budget was met for this car. It has comfortable seating with good bolstering, a well-engineered driver's layout, and a solid appeal overall. Materials quality, on the other hand, is below par, noise levels are relatively high, and accoutrements are few. Most of the Lancer's contemporaries have much more upscale interiors with better quality materials.

The Mitsubishi does have a high level of craftsmanship in its assembly compared to some rivals, though, which makes up for some of those low points. Nothing inside the 2015 Lancer is "cheap" per se, but nothing stands out as excellent either. It all fits well, speaking to the care in building this car.

The front seats of the Mitsubishi Lancer are well-tailored and comfortable, with just enough padding and bolster to make them good for the short or long drive. Headroom and legroom are very good for the class.

The back seats are a different story. They are hard and flat, offer little support, and are a bit lower to the floor than expected. Adults will find them cramped and uncomfortable for anything but short trips. They are fine for kids and child safety seats, of course, and the family dog won't complain either.

The trunk offers plenty of space for the Lancer's vehicle class, with 12.3 cubic feet in most models. The Rockford Fosgate stereo upgrade does add a subwoofer back there that subtracts about half a cube from the overall trunk, dropping it to 11.8. Most who opt for that upgrade probably won't mind the impingement for the extra boom it adds. 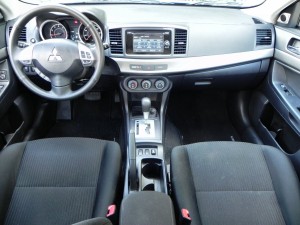 The infotainment system in the 2015 Lancer is centered on the Fuse system and its 6.1-inch touchscreen. That screen is a bit low-resolution for today's market, but still functional and clear enough for a compact car. Its rearview camera is just about right for this vehicle's size and given the high visibility the Lancer offers the driver, that camera is really only needed when parking in tight spaces.

Options for the Fuse system are limited, but pairing with a phone and other daily tasks are easy enough. Responses to navigation requests, satellite stereo tuning, or Bluetooth audio streaming are quick and fuss-free. We especially enjoyed the intelligent voice-activation system, which greatly simplifies many tasks.


Fuel Economy (8/10)
The Lancer has three engine options and four drivetrain choices, all of which rate different MPG numbers per the EPA. The 2015 Mitsubishi Lancer is capable of up to 34 mpg on the highway, making it on par with most in the compact sedan class.

The base model with its 2.0-liter engine achieves that highest rating, with the EPA giving it 29 mpg combined (26 mpg city, 34 mpg highway) when utilizing the manual or CVT option. 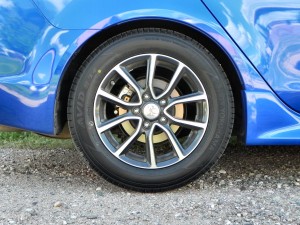 Opting for the sportier trims with their 2.4-liter engine reduces fuel efficiency somewhat. The two transmission and trim options for this engine don't change MPG ratings much between them with the front-wheel drive GT and five-speed manual transmission (CVT is optional) rated at 26 mpg combined (23 city, 30 highway). The SE model, which is all-wheel drive only, has a CVT as its only option and achieves 25 mpg combined (22 city, 29 highway). Our time in the SE AWC got close to that with an average of 23 mpg combined in mixed driving.


Predicted Reliability, Initial Quality Ratings (8/10)
J.D. Power and others expect the 2015 Lancer to have average reliability. Compared to most others in this class, though, the Lancer has a much longer history for this generation's build to draw information from. That means that the reliability expectations are not guesses based on the nameplate, but are instead educated assumptions based on the car's track record. So we give the Lancer a higher reliability score than it would merit were its design newer. 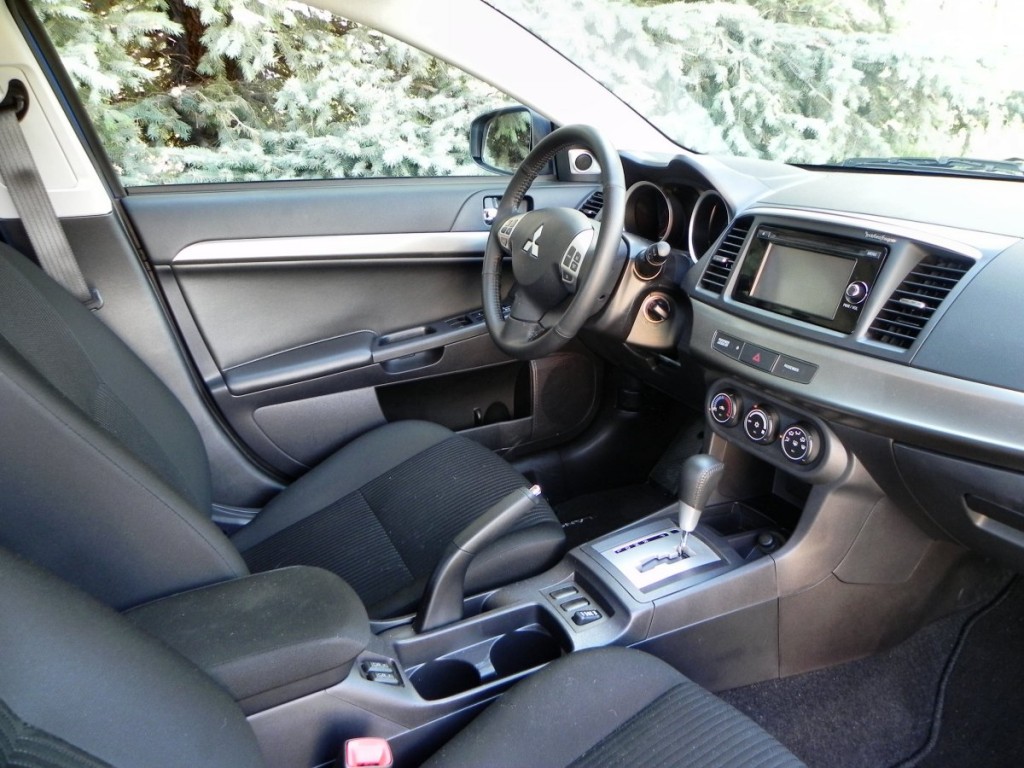 Safety (8/10)
The 2015 Mitsubishi Lancer is both a Top Safety Pick and a 4-Star winner. The compact class is usually pretty good about hitting high safety marks and the Lancer, despite its age, holds true to that expectation.

The Insurance Institute for Highway Safety rates the 2015 Lancer as a TSP with top scores of "Good" on everything but the small-overlap frontal crash test, which rated a second-best "Acceptable." Not unusual for compacts.

The National Highway Traffic Safety Administration gave the Mitsubishi Lancer a score of 4-stars (out of 5) on every crash test it performs.


Performance (10/10)
As mentioned above, the 2015 Mitsubishi Lancer has three engine options, three transmission options, and comes in either front-wheel or all-wheel drive. The latter is called All Wheel Control (AWC) by Mitsubishi with its focus on performance capability rather than off-pavement ability. The AWC system utilizes vectoring and braking to give tighter cornering and smarter traction control in every situation. We found it enjoyable and it won't let you down if the weather does turn a little hokey. 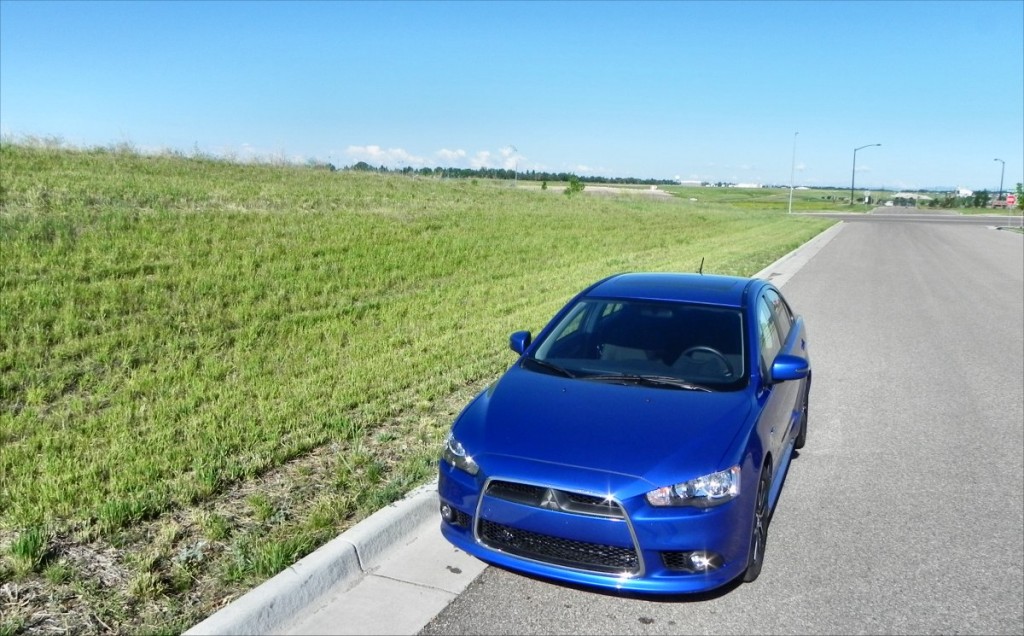 Engine options begin with the base level 2.0-liter four-cylinder that appears in the ES model. This outputs 148 horsepower and 145 pound-feet of torque through the five-speed or CVT. We would recommend keeping the manual transmission in this model as it offers more control to the driver and helps make up for the relatively weak output of the engine. In either case, though, the 2.0L will likely feel sluggish and underpowered to most drivers, even those who aren't sport driving enthusiasts. It gets the job done, but isn't exciting in any way and can be loud when highway driving.

The most affordable and fun engine option is the 2.4-liter four-cylinder in the SE and GT trims. This engine produces 168 horses and 167 lb-ft of torque. That 20-odd upgrade in power output means everything to the 2015 Lancer and turns this into a fun daily driver that feels confident and ready at all times. It also reduces engine noise on the highway, especially with the CVT. We drove the SE model, which is all-wheel drive only and has the CVT as its only option, and thoroughly enjoyed the car's feel on the road; thanks largely to this 2.4L's performance. Note that the GT model is front-wheel only and has the CVT as an option.

The top-tier Ralliart model for the 2015 Lancer utilizes a 2.0-liter turbocharged four-cylinder that has a more than respectable 237 hp and 253 lb-ft of output. This model is AWD-only and uses that European-style dual-clutch mentioned earlier. We didn't drive this version of the Lancer, but reports give it high marks on every front. It's an unusual entry for the segment as well, making the 2015 Mitsubishi Lancer one of the few compacts with a true sports model offering in its lineup. Speaking of which, the Lancer Evolution, now in its last year, takes the Ralliart engine and trim and boosts everything to 291 horses and 300 pound-feet. Few can meet that kind of performance.

Even without the sport trims, though, the 2015 Lancer is a great drive. Our week in the 2015 Lancer SE AWC showed us that this car is much more engaging and drivable than most in the compact market. 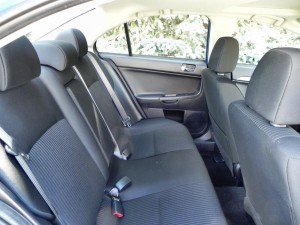 The base price for the 2015 Lancer, with delivery, comes in just under the $18,000 mark. That's about average for the class, but isn't anywhere near the lowest end. We drove the Lancer at a mid-point price of about $23,500 and found that to be a fair price for what's offered. Some competitors will bring better interiors and more comfort for the same window sticker, but none of those will include the same driving engagement and all-wheel drive in the bargain. The highest end of the Lancer, the Evolution, rings in at almost $39,000 when loaded up with options.

Given the solid safety performance of the Lancer and its excellent on-road handling, we like the value proposition here. The option for true sports variants and the very unusual option for all-wheel drive are big bonuses as well. Our only concern is the dated interior, below par back seat, and relatively loud cabin. All of those drawbacks pull our total scoring down for the Lancer.

On the whole, though, the value proposition is pretty good if you can live with the downers. You'll be hard pressed to find another compact sedan with AWD for under $24,000.


Total Score and Competitive Comparison (62/80, 77%)
The 2015 Mitsubishi Lancer is a somewhat surprising vehicle. We didn't expect much from a car going on eight years with the same design. Yet the Lancer proved to be a nimble, amiable drive. Although its lackluster interior turned us off, we did enjoy piloting and maneuvering the little Lancer SE around town and on a few byways.

Compared to others in this class, the Lancer isn't overwhelmingly standout, though. The Mazda3 offers similar performance and a much better (even best-in-class) interior experience for about the same price. Similarly, the Ford Focus gives a strong proposition for fun driving and a good interior. The popular Honda Civic is also a great choice for those who want an engaging drive as well as comfort. We do note, however, that none of those three offer all-wheel drive at all and only the Focus has a true sports car variant on tap with the ST. 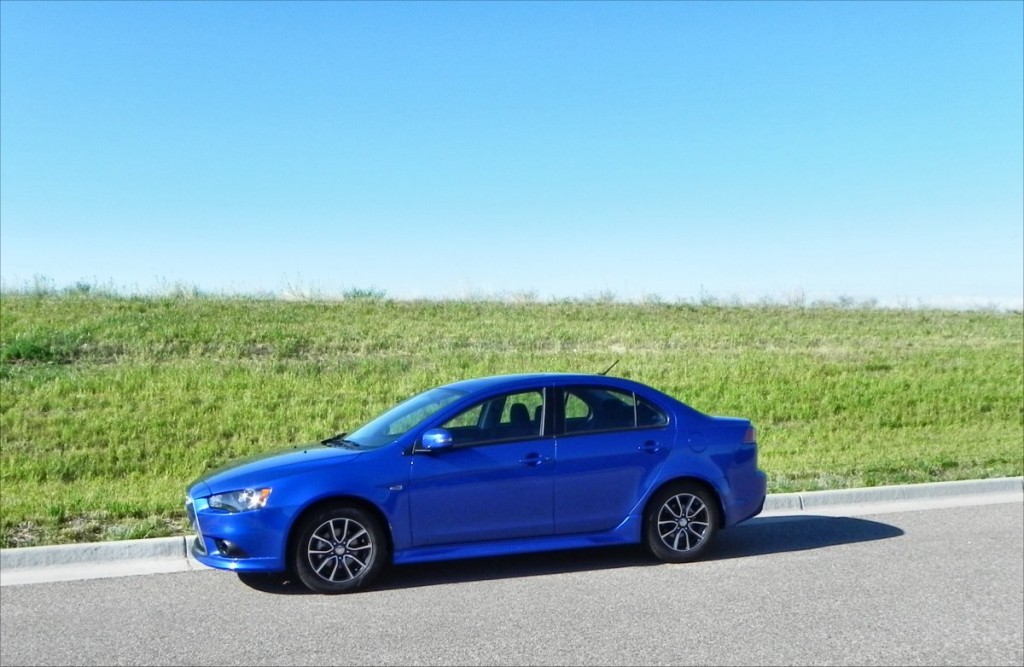 In terms of price and capability, the Subaru Impreza or WRX are good choices that compete with with the Lancer and have AWD as standard. Only the WRX offers the same type of driving engagement, however, and it's both pricier and less accommodating in its ride comfort.

Putting it all together, the 2015 Mitsubishi Lancer offers a unique proposition for the compact class. The SE AWC model we drove is itself indicative of that, offering a fun engine, nimble handling, excellent all-wheel drive, and a decent total package of goods at an affordable price. If the back seat is only for occasional use or just needed for child seats or the dog, the 2015 Lancer in this package is a great option.