WOBURN, Mass. (February 10, 2014)- Gone are the days when electric cars were positioned as a concept or a “thing of the future.” They are rapidly becoming more common on our roads and shoppers are finding them in high demand. iSeeCars.com has just released a study that demonstrates the gaining popularity of used electric cars.

While electric cars are still a just fraction of all vehicles sold in the U.S., the study hones in on the most popular ones, mainly Nissan Leaf, Chevy Volt, and Tesla Model S.  Of the three, the Volt sold the most cars with a share of close to 60% in 2013.  However, Chevy Volt lost share from 2012 by nearly 9% while the Nissan Leaf saw an increase of 7.5% from 2012-2013.

“The Tesla Model S is still just a sliver of the used electric car market since it was only recently launched in 2012, two years after the Leaf or Volt.  However, it seems to be in great demand as used Model S are selling above its new car price.  Surprisingly, the average used Tesla Model S is selling for over $99K which is above the average of its new car MSRP (which according to Edmunds ranges from $71,070 to $94,900).  On the other hand, the average used car price for both the Volt and Leaf are below their MSRP,” said Phong Ly, CEO and Co-Founder of iSeeCars.com.

A reason why the used Model S pricing is high is because a majority of the used Model S for sale last year is of the higher end model with the bigger battery pack.  (Consumers can buy the Tesla Model S in either a 60kWh or 85kWh battery pack or 85kWh Performance named P85 – the larger 85kWh battery has greater range and more horsepower.) However, even when we compare the used Model S average price of $99,734 to the $94,900 which Edmunds points to as the upper bound of the MSRP, used Model S pricing is still higher than new.   Further, when we analyze the highest end P85 model, the average used car price was $106,800 with an average mileage of 3,700 miles.   On the other hand, for a new P85, according to Tesla Motors’ website, the price ranges from $93,070 to $119,720 (fully loaded with all the options) or an average of $106,395; the average price however could go even lower with electric vehicle incentives of $7,500 or more depending on the state.  These federal tax credit and state and regional incentives, however, cannot be applied to used cars.

Perhaps, the scarcity of the Tesla Model S in general is driving up the price on the secondary market.  The CEO of Tesla, Elon Musk, acknowledged production constraints during the company’s third quarter earnings call last year, saying “we really are production constrained, not demand constrained.”  “Also, perhaps people are willing to pay a premium for a used Model S because they don’t want to wait a couple months for the delivery of a new one,” said Ly.

iSeeCars analyzed 45 million used car listings for sale/sold in the U.S. in 2012 and 2013 and studied the used electric car listings in particular to compare various metrics for Nissan Leaf, Chevrolet Volt and Tesla Model S.

See what others are saying about this study:

Since we released this study, we've seen a great response, including:

International Business Times: Why a Used Tesla Model S Can Cost More than a New One

And a Twitter mention by Tesla CEO Elon Musk: 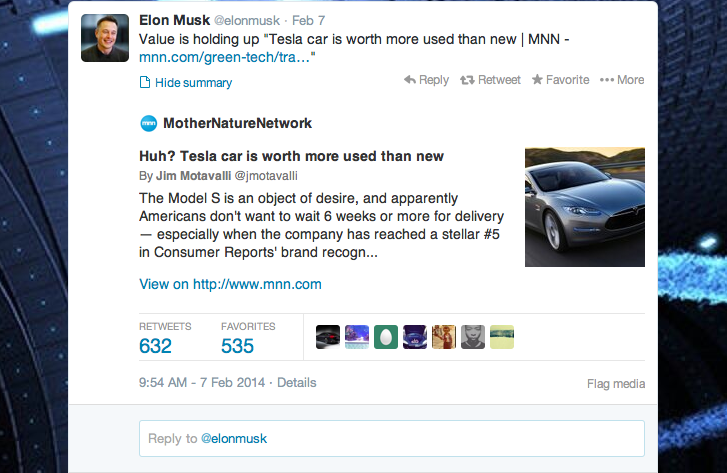 » Most Popular Car Colors
» Cars People Keep the Longest
» Most Popular Cars in America
» Best Used Cars for 2020
» Black Friday Car Deals for 2019
» Best Time to Buy a Used Car
» Cars That Hold Their Value
» Tesla Colors: Which Offer the Most and Least Deals?
» Car Colors With the Most and Least Deals
» RWD vs. FWD: Which is Better?
» 4-Wheel Drive (4WD) vs All-Wheel Drive (AWD): The Key Differences
» How Long Do People Keep Their Cars?
» Deals on Excess 2018 New Car Inventory
» Cars With the Most Average Miles Driven Per Year
» Best Places to Buy a Used Car
» Off-Lease Cars: What Are the Best Deals?
» The Most Dangerous Cars in the U.S.
» Tesla Model S is the Fastest-Selling Used Luxury Car
» Cars People Give Up Within the First Year
» The Longest-Lasting Cars to Reach 200,000 Miles and Beyond
Show More
Show Less