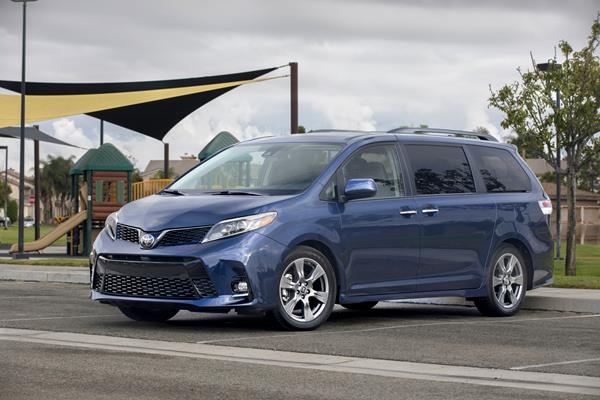 The minivan market is, despite all pronouncements otherwise, alive and well. The 2019 Toyota Sienna competes in a small segment that boasts some great options for families who need realistic, roomy transportation. Minivans offer huge amounts of interior room, plenty of seating for everyone, and lots of daily ergonomics that just can't be found in a crossover or SUV.

The 2019 Sienna is the only offering in the minivan segment with all-wheel drive. The Sienna also gets Amazon Alexa voice-assistant integration and Apple CarPlay this year. Outside of those improvements, however, the Sienna hasn't seen a significant upgrade since 2011 and is really showing its age.

For the 2019 model year, the Sienna is offered in five trim levels with some ala carte and sub-trim packages to add onto those with more upgrades. The base level 2019 Sienna is well-outfitted while the SE adds some sport to the minivan's ergonomics. Toyota also offers disability-ready mobility-enhanced options for the Sienna from the factory in the LE and XLE trim levels.

With plenty of standard features, seating for up to eight, and lots of trim level options to choose from, the Sienna remains a solid choice in the minivan market despite its age. 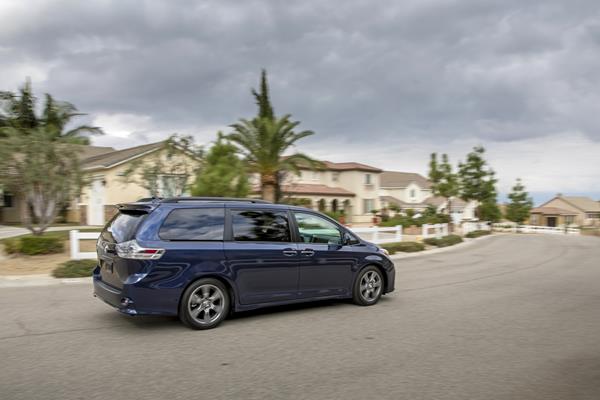 The 2019 Toyota Sienna is competing in a pretty upscale market of minivans right now and its exterior falls below expectation when compared. Minivans have become sportier, more refined, and stronger in their appeal. The Sienna isn't ugly, but it's not quite as good-looking as are other options in this segment.

The short nose appears stubby and too-quickly clipped, with a high ending point at the windscreen and a rounded, quick drop to the nose and bumper. The front fascia seems a bit confused, with the grille being small and largely split by the big Toyota marque at its center. Below, a huge intake dominates the front of the Sienna while thin headlamps accentuate that largeness. Fog lamps appear almost hidden by comparison, tucked into the side scoops where sporty airflow into the wheel wells should be taking place.

Bodywork on the Sienna is nicely accented with bone lines and a clear line at the belt and deep indent at the lower end. These help accent the front fenders and long body, with a slightly upward tilt for sport emphasis. The roofline opposes that slant with a downward tilt, creating a very light pinch at the rear window for sportiness.

Most of the 2019 Toyota Sienna's design is about ergonomics, though, with wide-opening front doors and big sliding side doors for easy access to the interior. Wheels are small and, while pretty, not very strongly emphasized at all. Overhangs are minimized to de-accentuate the large bodywork above.

It's a generally good design, but it appears dated and out of touch with today's expectation of in-your-face boldness or sport-hinting upscale appeal, which is now the norm.

Like most minivans, the 2019 Toyota Sienna is roomy and easy to get into and out of. There are some sore points, however, due to the Sienna's somewhat dated design and build. The largest of these is the lack of headroom in the second and especially the third rows. Removal of the second row of seating, whether the bench or captain's chairs, is also an issue, and some ergonomics woes make it a little under par.

We do like the huge amounts of visibility the Sienna offers the driver while going down the road and the easy way getting into and out of the Sienna is accommodated with the wide doors and low sills. The convenient straps on the second row quickly tilt them forward and away for easy third-row access/exit and those straps are accessible from that third row. The 2019 Sienna's front seating is also excellent, with lots of space and adjustment. Support for both very short and very tall drivers is given with a wide range of seating movement for the driver and front passenger. 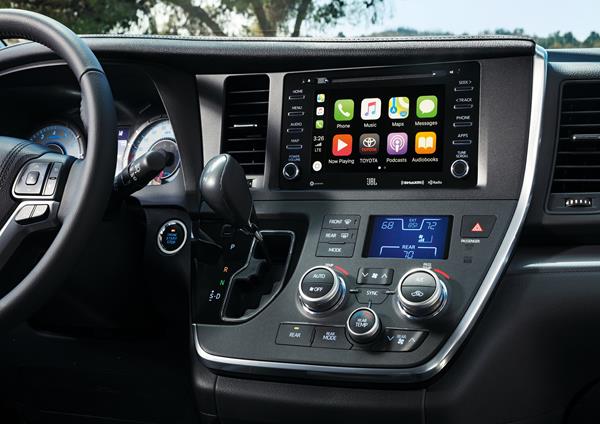 The second row is not quite as accommodating, though it does have a good range of movement fore and aft as well as with seat back tilt. What's missing is headroom and adjustment for that. The third row is worse, with very little adjustment option and even less headroom.

Materials quality is hit-and-miss in the 2019 Sienna. We'd like to see less hard plastic and more soft-touch surfaces and fewer random noises from things rubbing together or rattling during driving. Some ergonomics issues also plague the 2019 Toyota Sienna. The rear entertainment system, if opted for, has difficult controls and often finicky remote controls for use. The optional voice projection feature, which makes it easier to hear the driver throughout the cabin, is buried in the infotainment's screens and has not one-touch operation.

The good news is that the 2019 Sienna has plenty of cargo space, whether the third row is deployed or not. Huge buckets are opened up with the third row is up, allowing for a lot of stuff to fit into the back of this minivan. This is par for the segment, but very welcome. Folding down the third row gives a good amount of room and the flat floor surface is low and easy to use. The second row, however, requires some muscle to remove. Whether it's a bench or captain's chairs, there's some wrestling and maneuvering required to pull those seats out to give a flat cargo floor throughout. Once out, though, there is a ton of room for a lot of big stuff to fit.

Finally, for parents, the installation of child safety seats is good with lots of options for getting overhead tethers and boosters into four of the five or six spaces available. LATCH systems, however, will require some push as there is a lot of seat padding in between the anchors and the openings for them.

The technology in the 2019 Toyota Sienna is a bit disappointing and pretty dated. The infotainment interface is simplistic and not very modern. Glare is also a common issue on the infotainment screen, especially if the sun is not directly overhead. Menus are aged and, while easy to operate, not very clear in resolution.

The only option for smartphone integration outside of basic Bluetooth is Apple CarPlay. Android Auto is nowhere to be found and the Toyota-badged integration app is clunky and not very user-friendly. The new Amazon Alexa integration is fun, but not terribly useful either.

The Sienna does make up for this with excellent voice control options. The voice control in the 2019 Sienna's Entune is very good at understanding and responding, though it can be clunky if the request is not just to find a radio station or make a phone call. 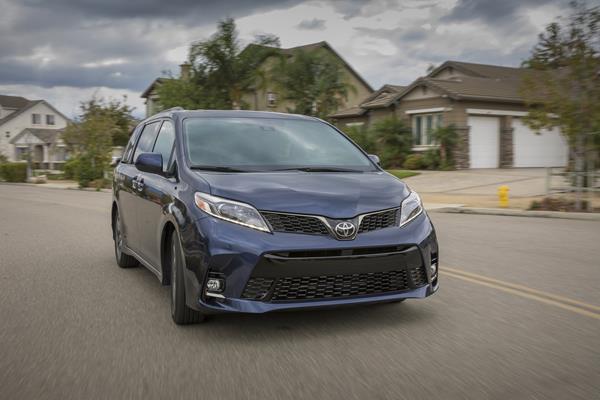 The 2019 Toyota Sienna is EPA-rated at 19 mpg in the city and 27 mpg on the highway, which is on par with front-wheel drive rivals. Going to all-wheel drive in the Sienna lowers those numbers to 18 mpg city and 24 mpg highway.

In the real world, expectations should be slightly lowered as various passenger loads and cargo configurations will greatly change economy returns. Still, with three kids and two adults on board, the 2019 Toyota Sienna managed an average of 24 mpg overall and that's not bad at all for the segment.

The 2019 Toyota Sienna has no recalls as of this writing and is one of the top-rated minivans in J.D. Power and Associates Vehicle Dependability Study with a rating of "Among the Best." For that, we give the Toyota a lot of props as a top-notch minivan in that regard.

The 2019 Toyota Sienna has mixed returns for safety. Although no recalls have been made, both the NHTSA and the IIHS have given the Sienna mixed crash test results.

The National Highway Traffic Safety Administration gives the 2019 Sienna a 5-Star overall rating with four stars each for frontal and rollover results and five stars for side crash test results.

The Insurance Institute for Highway Safety, however, has given the 2019 Sienna top scores of "Good" for moderate overall, side impact, rear crash protection, roof strength, and front crash protection results. It has also given the Sienna a second-best "Acceptable" score for small overlap front driver and headlight test results and a second-worse "Moderate" result for small overlap front passenger crash test results. 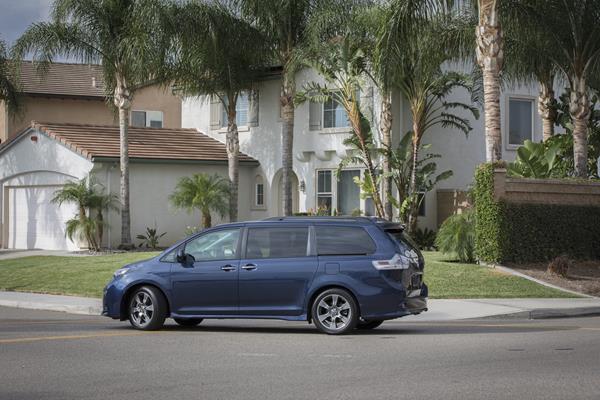 Powering the 2019 Sienna is a well-vetted 3.5-liter V6 engine that outputs 296 horsepower to an eight-speed automatic transmission. Front-wheel drive is standard, all-wheel drive is optional. Handling changes with the switch from FWD to AWD and we recommend AWD as a result. Not only does it offer better all-weather capability, but it improves road feel in the Sienna as well by adding more balance to the minivan's turns and acceleration.

We like the way the Sienna feels around town and on the highway. It's predictable, confident, and quiet. Other offerings in this market are more maneuverable, though, and without the 360-degree camera, parking in the Sienna can be tough in tight situations.

The 2019 Toyota Sienna is a slow seller in the minivan segment, falling well behind the Chrysler Pacifica and Dodge Grand Caravan in sales figures. Dealerships may be willing to deal, though, given this fact and the drop in Sienna sales in the last couple of years. That could work in a buyer's favor.

The Sienna remains the most expensive minivan, however, with a higher base price than any other minivan on the market. It's chief selling point is its high reliability expectation, which also lends the Sienna to a solid resale value down the line. 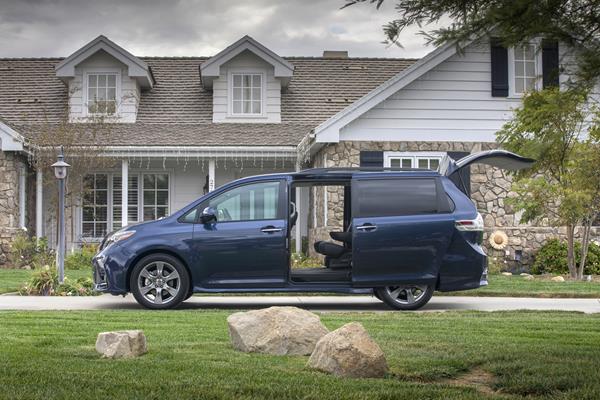 Competitors to the 2019 Toyota Sienna include the best-selling Dodge Grand Caravan, the well-done Chrysler Pacifica, and the low-cost Honda Odyssey. Also an offer is the cost-effective Kia Sedona. Of those, the Sienna ranks the lowest in terms of overall ranking and scoring on our metrics. The Chrysler Pacifica is a best-in-class option on several fronts while the Kia and Honda offer lower-cost options that don't skimp on excellence.

Yet the 2019 Toyota Sienna is a good choice for minivan buyers looking to maximize long-term cost-effectiveness and resale viability. The Sienna is a good minivan with all of the expected usefulness of the segment and is worth shopping against its rivals for those reasons.