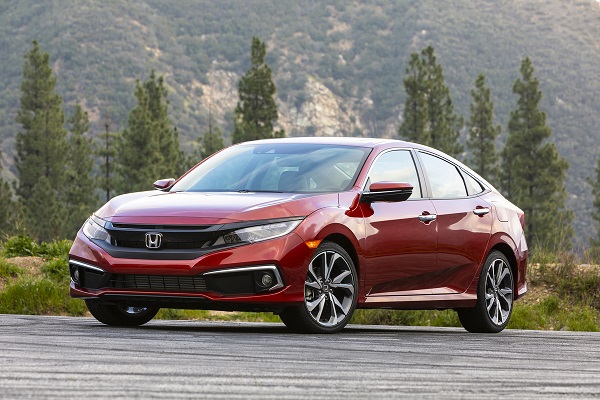 Overview (Final Score: 96%)
The 2019 Honda Civic is a compact/midsized car that serves multiple buyer groups. Available in three body configurations, coupe, sedan, and five-door hatchback, the Civic is a broad line of car that sells in huge volumes. In fact, Honda likes to point out that the Civic is larger in sales than many entire vehicle brands in the United States.

The Civic resides in a segment that is growing less and less competitive by the day. Mostly due to the Civic's dominance. The folks at GM, Ford and Dodge, have quit. They won't be making their models anymore. Apparently, their formula was not profitable. Honda's is, and that formula involves making the U.S. Civic mostly in America. The hatchback is imported.
Like all great family cars, the Civic checks off a lot of boxes. Spare tire - check. Great safety ratings - check. High value for the dollar - check. Outstanding fuel economy - check. The Civic can also come in sporty trims. With a price point from the low $20Ks to the high $20ks for all but the exotic Type R trim, the Civic is in the perfect sweet spot to work with a lot of budgets.
We have tested three different trims and two of the body styles of the latest Civic, most recently the $28,220 Touring

The current generation Honda Civic is a great looking vehicle. Honda has done a fine job of walking the fine line between visual excitement and overdoing the plastic add-ons. The Civic sedan is elegantly styled. The Hatchback looks a bit more youthful and has some stronger style elements. The coupe is sleek and sporty looking. Both the Si and Type R sports versions have the added spoilers and carbon fiber enhancements their buyers will desire. 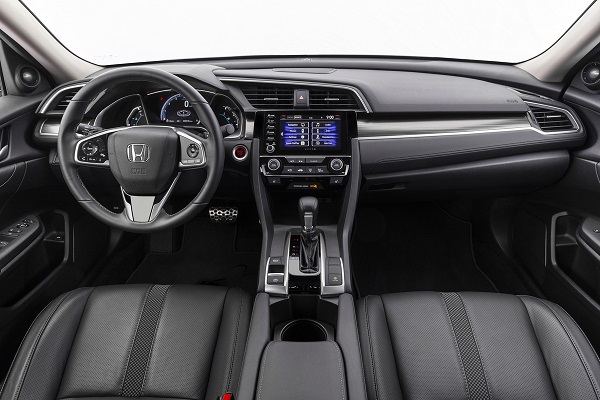 Inside, the Civic features the usual top-notch Honda-designed ergonomics. The Civic is easy on the eyes inside and uses tasteful, modern materials in every location. Sure, there is a bit more plastic in the Civic than in an Accord, or more than one might find in a premium model this size, but for the price point, it is hard to find a better design on the market. Our most recent Civic Touring tester impressed us with stylized leather heated seats. Although the major color was gray, the dash had a very elegant-looking dark matt wood trim that appealed to our tastes. The shifter is conventional and everything seems to fall to hand.

Honda's Civic has the right amount of technology for this price point, and not one smidge more. The easy to use touch screen has buttons for all of the major menus so you don't have to actually touch the screen except when configuring your settings and audio presets. The volume knob is back, so don't fret. Using the infotainment system in the Civic is as easy as it gets. Our phone synched instantly and we never had any trouble with the menus.
Honda has both Android Auto and Apple CarPlay compatibility, something you will not find in the Corolla from Toyota. We used Android Auto quite a bit. We loved that Honda integrated not just the main infotainment screen, but also the gauge cluster. When you are using Google Maps or Waze to navigate, the Civic displays the next turn in the gauge screen. This level of advanced integration is unusual for any car, never mind one for under $30K.
If we had to single out one thing we liked most about the technology found in the Honda Civic it would be that none of it is confusing or annoying. Honda makes things work well, and just the way you would expect. You won't need to pour through manuals to make it all function for you. 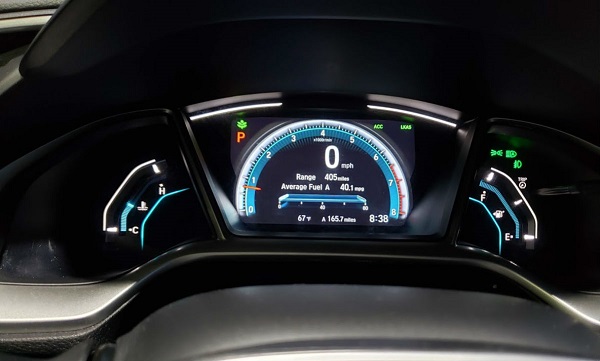 Fuel Economy (10/10)
Is a score of 11 out of 10 allowed? The Civic's fuel economy is fantastic. All three of the Civics we tested for week-long intervals returned fuel economy above that of the EPA Combined estimate. We kept very careful track of the fuel we consumed on our last test which was over 50% in city traffic and stop and go commuter misery. The Civic returned 39 MPG, despite having the AC on full time. Considering the Civic uses regular fuel, this is an outstanding real-world-value car for those that want to keep fuel usage and costs under control. 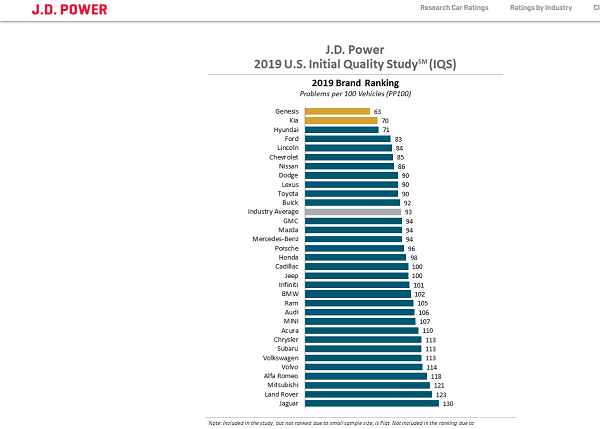 Predicted Reliability, Initial Quality Ratings (8/10)
The Honda brand is well known for quality. Hondas earn a premium in the used car market because of this. However, in JD Power's most recent initial quality survey, Honda was below average as a brand. Also, some owners (not many) have reported that the Civic has an engine oil dilution issue similar to the one the CR-V now has a TSB to address. We still feel Honda makes a high-quality car and for that reason, it earns a score of 8/10.


Safety (9/10)
The Civic would be a Top Safety Pick Plus had its headlights not scored poorly in IIHS testing. The Civic aces every crash test and its driver assist systems are among the best on the market - at any price. We think Honda Sensing rival's Tesla's Autopilot for functionality and we used it extensively to control the Civic's speed and its lane centering. If you don't want to use it, there is an on/off switch that defaults to off. Like all of the Civic's tech, its safety kit is simple and never annoying. 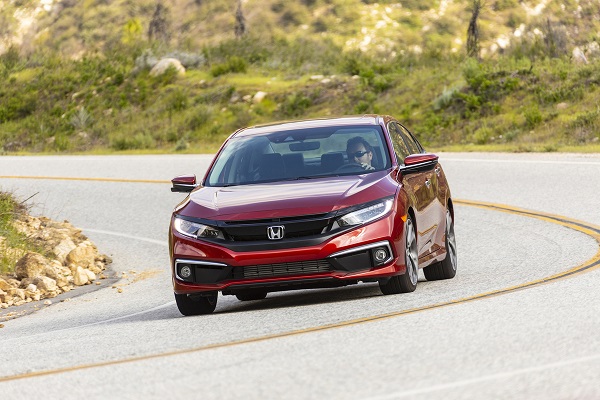 Performance (10/10)
If you can't have fun in a Civic you're doing it wrong. The 1.5-liter turbocharged engine has a very strong pull from a stop. The Civic is also fast in most situations. The engine never seems to work hard. Those familiar with Honda's past high-revving engines should give the new turbo a try. It only takes a few hours to see the magic. 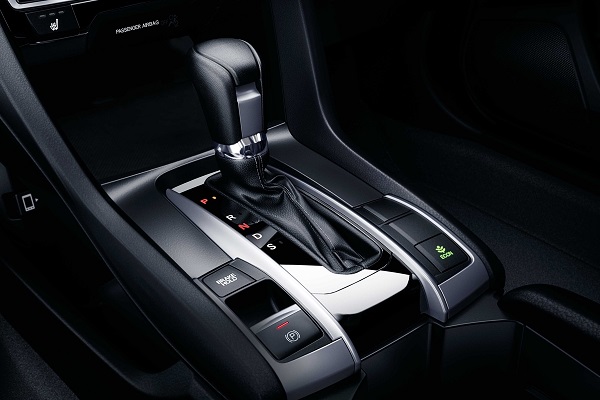 Our most recent tester had the excellent constantly variable transmission. CVT transmissions have earned a bad reputation from many, but we love them, and Honda's in particular. The transmission is smooth, never drones, and you will not miss the shifting. For those that prefer the involvement of a manual transmission, Honda offers it on multiple trims. We really liked the Sport Mode that the CVT automatic comes with. Using it's as simple as pulling the gear selector back one notch. There are also paddle shifters on some trims.
All Civics drive in a way that will bring a smile to your face. Better yet, Honda makes the handling tight, but also comfortable. Not an easy trick. 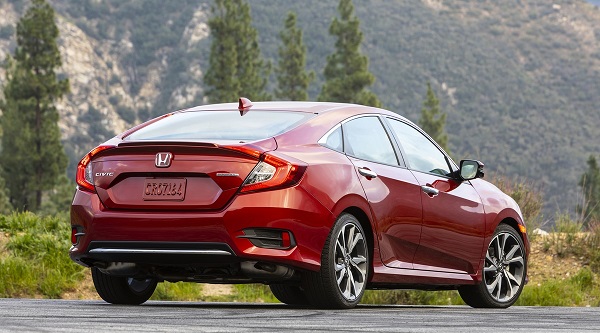 Pricing and Value (10/10)
Aside from the $35K Type R, all of Honda's Civics fall between about $21K and $29K. We consider it a act, rather than an opinion that Honda packs tremendous value in the Civic for the price it charges.


Total Score and Competitive Comparison (77/80, 96%)
We score the 2019 Honda Civic a near-perfect 77/80 or 96%. If we could offer the Civic extra points for fuel economy we would! Honda makes no mistakes with the Civic. We would recommend any of the trims to those searching for a vehicle in this class.
Mazda's new Mazda3 and certain trims of the Hyundai Elantra also impress us. We really consider these three to be the best of the segment now, particularly since three major brands have quit. The Mazda3 is now available with AWD. The Hyundai Elantra GT Sport is so good we'd be remiss if we didn't let readers know it should be a consideration, particularly for those shopping for a hatchback. Honda has two tough competitors, but if sales mean anything, Honda is still the clear leader in this race.