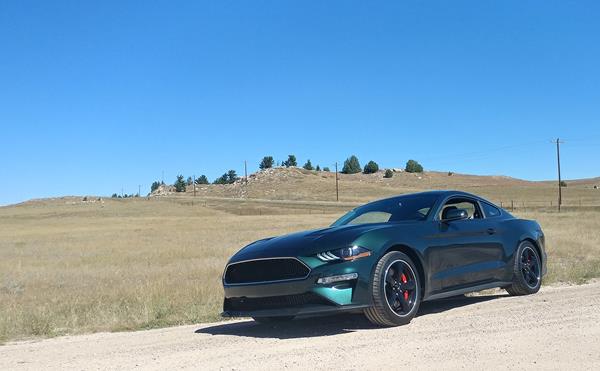 More so than any other pony car in the American sports coupe arena, the Ford Mustang has options to suit just about anyone. Redesigned in 2015 with a better ride, sportier quality, and much-improved interior, the Mustang also has powertrain and technology options to fit any driving style or budget.

No other American muscle car can claim the kind of sales history and popular persona that the Mustang holds. For 2019, Ford added a new Bullitt appearance package and a new California Special trim point. 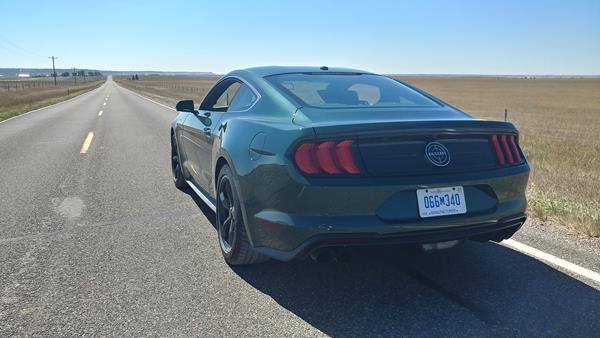 This generation of the Ford Mustang returned to its fastback roots, with the coupe models having a fastback-style roof line, but a standard rear trunk instead of a hatchback-style opening as was found in the 1980s.

The Mustang dips low in its hood, creating an aggressive, small and wide opening for the grille with peering multi-faceted headlamps on either side. Fog lamps are strips of LED lights below the headlights, interrupting the bumper run and balancing the lower aero scoop and intake ports.

The hood of the 2019 Mustang smooths upward in an aggressive round to suggest heavy power underneath. Air vent ducts on the edges for cooling and improved aerodynamics are hinted as well. The front fenders of the Mustang are not aggressive, but flared slightly for style, allowing the bodywork to run back nearly flat to the heavy rear haunches.

The Mustang's roof line is low and fast paced, pushing towards the abrupted rear deck for fastback style. A spoiler on some models breaks up this transition a bit, but models without it have an integrated spoiler on the rear edge that melds well with the powerful rear end of the 2019 Ford Mustang and its particular three-bar, active rear lights.

The 2019 Mustang makes no bones about its aggressive muscle car past and pony car capabilities. In some packages, such as the Bullitt offered this year, it's a beautiful mixture of nostalgia and uber-cool muscle car. 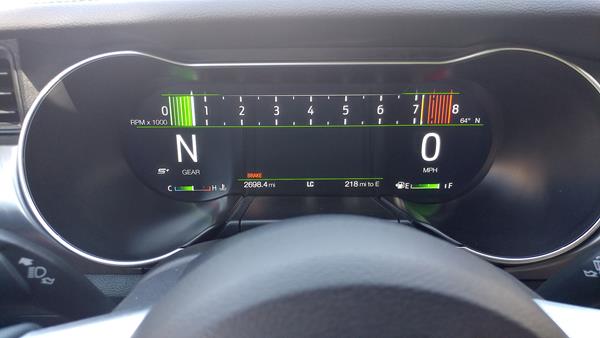 The 2019 Ford Mustang has a nostalgic, but modernized interior with good touches all around for style and appeal. The front seats are comfortable for most with plenty of bolstering, but without the sports car "stab" often associated with extreme performance seating. That can be present if the optional Racaro seating for the upper-end models is chosen.

The Mustang has good legroom with plenty of adjustability for most drivers. Headroom is at a premium, however, with taller folks having a struggle to find a good position for both visibility and head clearance. For my six-foot three-inch height, the seats had to be all the way to the floor for me to drive the 2019 Mustang without bumping my head or looking just out of the top of the windscreen.

The rear seats in the Mustang are mostly for show, though kids can sit two or even three across when they must. Getting in and out of those seats is a struggle, with the front seats tilting forward just enough to allow a climb in and out. Legroom is almost non-existent with an adult sitting up front.

Controls for the driver are well laid out in the 2019 Ford Mustang and we like the switchgear for its nostalgic touches and fun emblems. Especially in the smoothly cool Bullitt model, which sports a cueball shift knob and Mustang Pony deletes throughout the cabin in favor of the Steve McQueen "Bullitt" emblems and target sign. 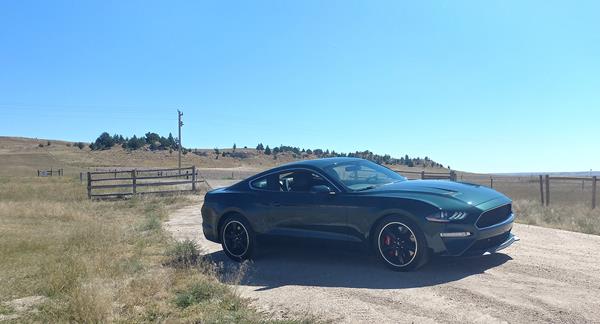 The 2019 Ford Mustang benefits from the automaker's improved infotainment with Sync 3. The infotainment is intuitive, responds quickly, and is easy to understand. We like the intelligent smartphone integration, especially with Apple CarPlay and Android Auto being standard. Even the Ford-installed navigation system for Sync is nicely done.

Also awesome for the Mustang is the upgrade to the fully-digital instrument cluster and driver information screen. The driver info screen thus becomes almost completely customizable with great options like a bar-style (left to right) tachometer and digital or analog-style gauges.

Driver's aids for the 2019 Mustang include adaptive cruise control and a very well done voice command system for the infotainment. Blind-spot management and rear cross-traffic alerts are also available.

The 2019 Mustang has two engine options. The base engine has an impressive 21 mpg rating for city driving and 32 mpg on the highway.

Upgrading to the big V8 powerhouses for the Mustang drops fuel economy to 16 mpg in the city and 25 mpg on the highway. In our week with the 2019 Mustang Bullitt model, we saw an average of about 16 mpg overall, but admit that a lot of performance driving was included in that week. We did average about 24 mpg on the highway. 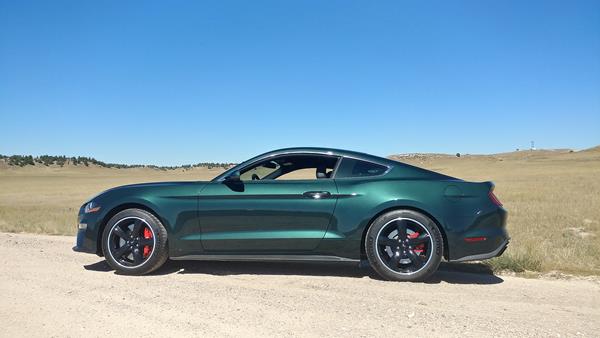 The 2019 Mustang has a strong safety rating thanks to its advanced safety systems, including one of the best crash mitigation systems we've used. The National Highway Traffic Safety Administration (NHTSA) rates the Mustang with a top score of five stars overall and with five stars each for every test published.

The Insurance Institute for Highway Safety (IIHS) has likewise given the 2019 Mustang high marks for crash test results. Top scores of "Good" are seen in all but the small overlap driver's side test, which received a second-best "Acceptable."

Performance in the 2019 Ford Mustang comes in several flavors. There are three engine options, but these engines have varying outputs according to the tuning of the rest of the powertrain.

The base engine is a 2.3-liter turbocharged four-cylinder EcoBoost engine that outputs an impressive 310 horsepower. A six-speed manual transmission or an optional ten-speed automatic are available with this engine. Higher fuel efficiency is gained with the automatic, but more fun is had with the manual. Like most Ford transmissions, the manual takes some time to learn as it has a mushy clutch pedal that requires some mastery.

The larger engine is a 5.0-liter V8 that outputs 460 horsepower in its standard GT configuration. The same six-speed manual or ten-speed automatic are available for transmission options. The Bullitt model upgrades this engine, through exhaust treatments, to 475 or 480 horsepower (depending on transmission).

The special track-oriented Shelby models of the GT350 and GT350R use a 5.2-liter V8 that outputs 526 horsepower and mates only with a six-speed manual transmission.

Our week with the 2019 Ford Mustang Bullitt model was a blast. Despite its heavy design, the Mustang corners well for its class and feels confident on the road. This is an American sports car, however, so European-style corner-carving is not in the works unless one is willing to let loose with the throttle and break traction. If so, there is a lot that the 2019 Mustang can do and the Bullitt model just lends a lot of credibility to its persona.

The Mustang is quieter on the highway than expected, with only the engine and stereo offering noise inside the cabin. It's a comfortable long driver too, though it's on the performance end that it becomes fun. 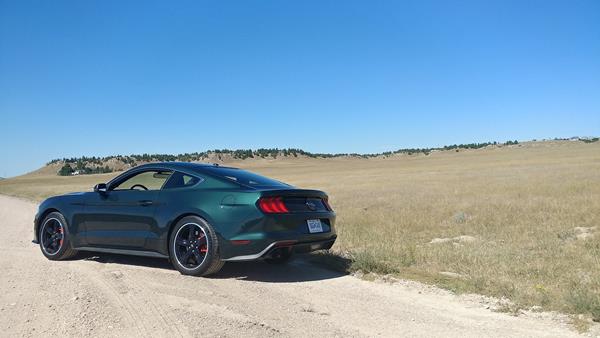 The 2019 Mustang has a surprisingly good value metric for a sport coupe. It's American pony car nostalgia notwithstanding, the Mustang is priced well for buyers at most levels. At the base end, the Mustang comes well-equipped for the price tag and will perform well as a daily driver that returns some fun too. In the upper end, where performance is a higher metric, the Mustang holds its own against comparables from other makes and is still priced within the budget of buyers in those arenas.

Convertible models of the Mustang are much more spendy and less value-oriented, by comparison to the coupe.

We feel most buyers will be more than happy with an EcoBoost Premium model in the convertible format, if putting the top down is preferable. Most buyers of the GT models will be happier with the coupe, given its better price point, and the good performance that model offers as-is. 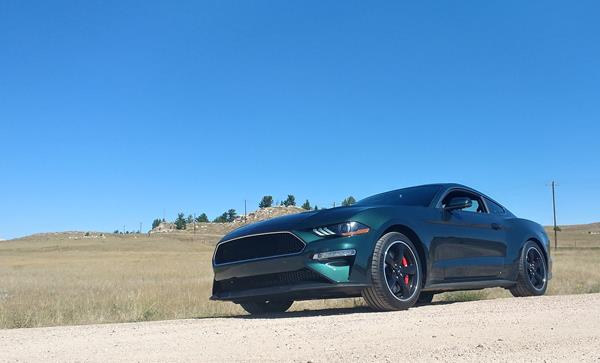 There are more than a few comparables to the 2019 Ford Mustang for buyers in the sport coupe or convertible market. The primary pony car options are the Chevrolet Camaro and the Dodge Challenger. Both are offered in good base trims with solid V6 powerplants that are comparable to the EcoBoost models of the Mustang. The Challenger is a much larger vehicle, however, and has a more usable back seat, but suffers in performance with the V6 when compared to the peppier EcoBoost from Ford. The Chevrolet V6-powered Camaro Convertible is a great option against the Mustang convertible. Also consered against the Mustang is the BMW 2 Series, again in its convertible option, especially if style and sportiness are the want. The BMW is priced at about the same level as the Mustang convertible or GT models.

The end game for the 2019 Ford Mustang and the reason it does well, however, is its excellent mixture of today's performance with yesterday's nostalgia. There's nothing quite like a Mustang and the 2019 Mustang captures that balance very well. There's little to lose and a lot to gain if the Mustang becomes the buyer's choice.