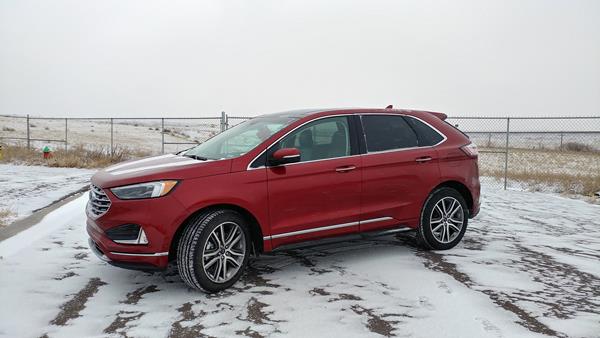 Making a name for itself as a well-sized, maneuverable, small crossover, the Ford Edge has been a winning design for the automaker. It hits a sweet spot for many buyers, though the segment is now crowded with very good options, requiring Ford to make some updates to the Edge to stay relevant.

The Ford Edge entered its second generation in 2015 and sees a refresh of that for 2019. The update includes more dynamic front and rear styling, a new transmission, more standard features, and the changing of the Sport moniker with ST. The Edge is a smooth ride with lots of interior space and fuel efficiency.

The 2019 Ford Edge is a midsize crossover that seats five. There are four trim levels, starting with the SE and moving through the SEL, Titaniun, and ST. There are two engine options for the 2019 Edge, depending on model choice, and this year Ford debuts a new eight-speed automatic transmission for both of those.

Loaded with standard features, the Edge has a lot going for it in a crowded marketplace of excellent choices. 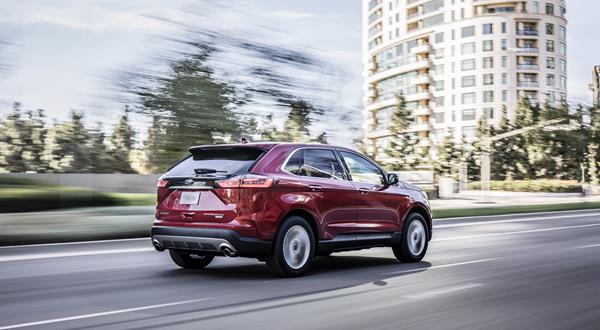 The 2019 Ford Edge may not jump out at the onlooker as being something special, but its design elements are a good mixture of contemporary and is uniquely Ford. The flat fascia, wide grille, large bumper bisect, and thin headlamps are signatures of the Ford brand and fit well on the midsize crossover. The Edge also has a flat hood with accentuated edges to create a fender crease for the driver. The foglamps finish the fascia's appearance.

These elements are new to the Ford Edge, but the rest of the bodywork changes little from the 2015 remodel of the crossover. Body styling comes in the form of a very slightly tapered roofline, rounded window edges, and a strong beltline edge that runs through the door handles to the tail lamp. Below, another deep cut creates the running board edge above the bottom of the doors. This curves the door bodies, creating a refined look.

The rear of the 2019 Ford Edge is more rounded than it was in previous designs, seeing an accentuation of the bulbous to emphasize both the sport spoiler above, which runs off the roofline, and the larger bumper area. It also creates the appearance of a larger rear overhang than there is, promising interior roominess without compromising the Edge's notorious maneuverability.

The 2019 Edge has a great look overall that sits well in the midsize crossover-SUV segment. 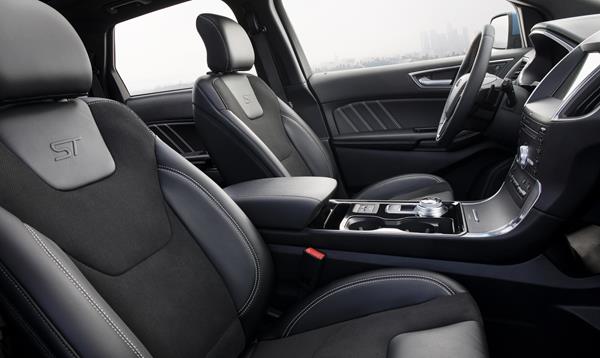 The greatest attribute of the 2019 Ford Edge's interior is the amount of spaciousness it has for the size of the vehicle. The Edge feels far bigger than it is for passengers inside. It's also quiet and made up of quality materials. Those high points are favorites.

There are downsides, though. The 2019 Edge is rather plain and uninspired in its interior design. Many elements feel outdated, including the lower portion of the dashboard and the center armrest/console and the controls ahead of it. Similarly, the driver's controls, particularly the steering column dongles for windshield wipers and lighting, feel a bit flimsy and yesteryear. Finally, visibility for the driver, to the rear, is terrible in the new Edge. The large rear pillars are shaped and placed just right to cause huge blank spots in the driver's vision when looking over the shoulder or through the rearview. Worse, the side mirrors seem too small for the size of the crossover, further impeding blind spot visibility.

Those downers are helped along with more big upsides. Seating comfort in the 2019 Ford Edge is excellent and cargo space is well beyond the norm. In the two front seats and the outboard passenger positions at the rear, the Edge offers plenty of legroom, headroom, and shoulder room.

The middle position on the back bench is a bit tight, but that's normal for this class and there's not much to be done without widening the vehicle's body. It is, however, flatter than most in terms of the seat bench, giving that position more comfort than would be had otherwise. Parents will also be happy with the easy-access LATCH anchors on the outboard positions for easy child safety seat installation.

Cargo space is very good in the 2019 Edge at 39.2 cubic feet behind the back seat and 73.4 cubic feet when those seats are folded. That cargo space is also wide, with a large rear hatch opening, and the seats fold very flat for a good load floor. 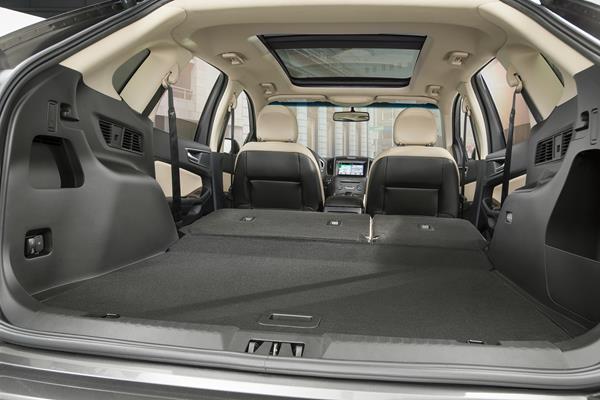 The 2019 Ford Edge comes with Ford's latest Sync 3 infotainment system. A tiny 4.2-inch display is standard in the base model, but upgrades to an 8-inch touchscreen at higher trims. This can be upgraded to include navigation, more USB ports for charging (up to four in all), and includes Apple CarPlay, Android Auto, and Amazon Alexa integration.

Sync 3 is responsive and easy to use, but lacks some of the sophistication of some newer offerings and is generally slower on the uptake than are many new options. Similarly, some controls seem out of place or awkward on-screen and off.

In the real world, our 2019 Ford Edge with the four-cylinder engine did very well on MPG, returning 23 mpg overall even with AWD. 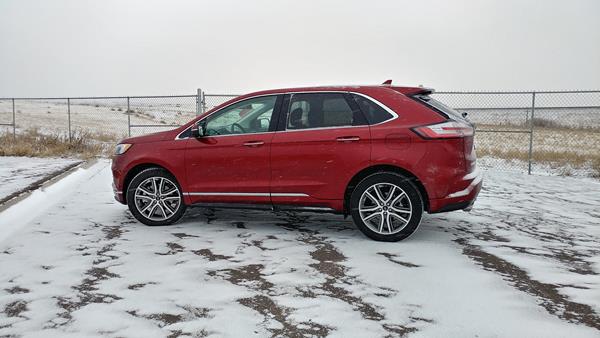 The 2019 Ford Edge has received an "About Average" score from the J.D. Power and Associates Vehicle Dependability Study. There have been no safety recalls for the Edge and its warranty is about average for the class.

Those plus really good crash test results mean that the 2019 Ford Edge scores highly in our safety measures. The National Highway Traffic Safety Administration (NHTSA) rates the Edge with five stars overall, giving the crossover five stars each for frontal and side crash test results and four stars for rollover results.

The Insurance Institute for Highway Safety (IIHS) rates the 2019 Edge with top scores of "Good" on all crash tests conducted, including the new small overlap front passenger test. The Edge also received a "Superior" score for its front crash test prevention technologies.

The 2019 Ford Edge is powered by either a 2.0-liter four-cylinder engine or a turbocharged V6. The latter is in the ST model only. Both are coupled to an eight-speed automatic transmission with AWD as an option.

The 2.0L engine outputs good power for the Edge's size, at 250 horses. The V6 jumps that to 335 horsepower, which is crazy amounts of energy for a vehicle of the Edge's size. With either setup, the 2019 Edge offers great handling and a quiet highway ride. It doesn't corner as sharply as some, but the Edge always feels confident. Especially in the AWD models.

The 2019 Ford Edge offers a lot of content for the price paid, but does fall short in a few areas, which may be why consumers are giving it pause. Sales for the Edge are slightly down so far this year, especially as newer rivals enter the field with more sophisticated offerings.

That said, the Ford Edge SEL is an excellent mix of value and amenities. It comes with several expected inclusions like dual-zone climate and the better infotainment system. Availability of further options is wide open with the SEL as well, so it's easy to personalize with Ford's equipment packages. 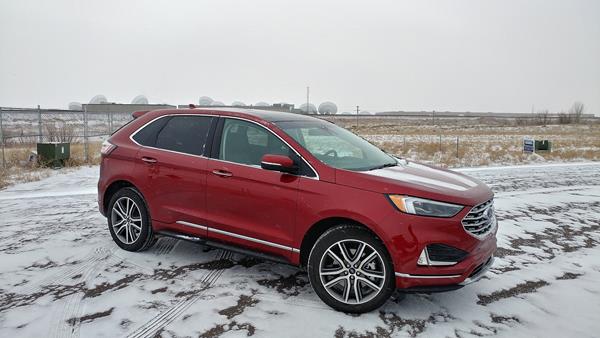 The 2019 Ford Edge has several competitors, many of which are excellent choices. We would also recommend consideration of the all-new Chevrolet Equinox, the excellent Honda CR-V, the well-done Nissan Murano, and the top-rated Hyundai Santa Fe. All are strong competitors and worthy of a look against the Ford Edge.

During comparison, however, consider that the 2019 Ford Edge is often priced at or lower than the competitor and likely comes equipped better. Though the Edge has some downsides, it's still competitive and remains a good choice in the midsize crossover segment.