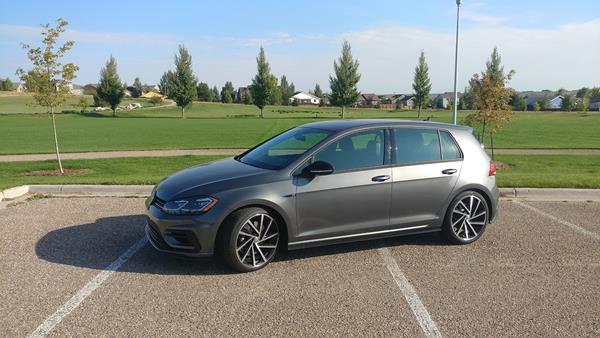 The 2018 Volkswagen Golf R is VW's premium hot hatch, seated just above the Golf GTI in the high-selling Golf lineup of compact hatchbacks. Where the GTI generally sets the benchmarks for the market on the whole, the R sets its own standards of excellence by adding all-wheel drive, about 70 more horsepower, and better handling and braking than the GTI.

The Golf R is otherwise very similar to the GTI, which itself carries most of the excellence that makes the Golf lineup a popular buy worldwide. The R sacrifices some fuel economy and comfort in exchange for its higher performance, but those who buy one will not likely be worried about that tradeoff.

The 2018 Golf R carries on with the current generation's design with only a few minor changes, including a larger touchscreen for infotainment, a new wheel design, and some safety items. The biggest change this year, though, is a new seven-speed automatic transmission to replace the six-speed from previous years.

The 2018 Volkswagen Golf R comes in only one trim level, but the buyer is given a choice between the six-speed manual transmission or the new seven-speed automatic. Most of the R's optional equipment is sold a la carte or in small packages.


What We Love About the 2018 Volkswagen Golf R: 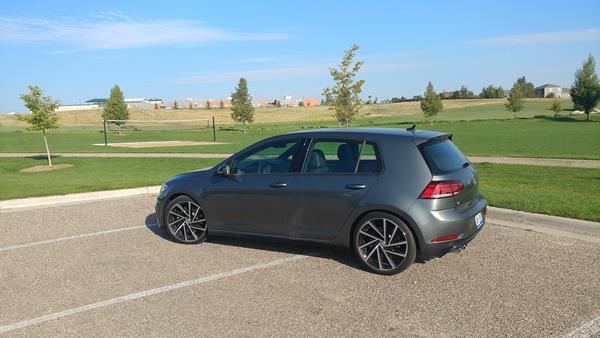 The 2018 Volkswagen Golf R is a bit of a sleeper. Most who look at it while sitting at a stop light or while turning to enter the expressway will just assume it's another VW Golf. When the throttle is pressed and the little R starts to fly away, however, the truth comes out.

Like all Golf vehicles, the R is basically a five-door hatchback designed to be versatile, roomy, and useful. It's compact size, contemporary design language, and boxy form are unique, but not stand out amongst its peers.

The R model is differentiated from other Golf models by discreet "R" badging on the grille, fenders, and rear hatch. Close observation will also reveal the larger wheels, bigger calipers behind them, and (optional, but recommended) pinstriping. Aerodynamic tweaks to the underpinnings and lower front fascia might also be noted.

The boxy design of the Golf R pays off in the improved rear-seat headroom and useful cargo space the little car has. The R model benefits greatly from the excellent interior design of the Golf lineup, taking its cues and materials from the higher-echelon trim points of the other Golfs. It's both upscale and ergonomically plain.

Wide-opening doors, a high roof, and an easy step-in greet the driver and riders to the Golf R. Then the comfortable, sport-centric seating with its thick bolsters and firm but cushioning feel are noted. All high points for the car. The front seats are accommodating, well-designed, and hold one in place even during spirited maneuvering. 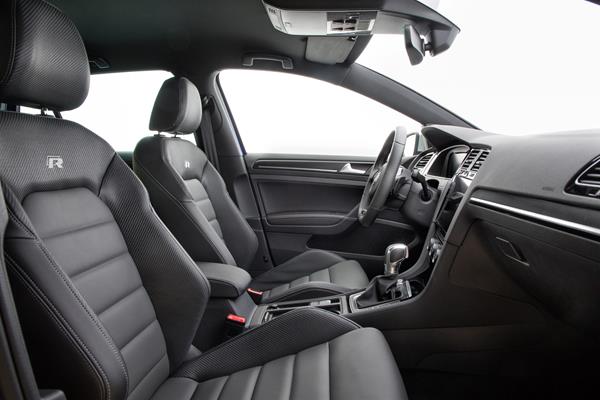 The back seats are simpler and not as roomy, but are of good quality and design for a compact car like the Golf. Three across as adults is not likely to be anything but a sardine squeeze, but two sit comfortably in the back seat and three kids across is very doable. Legroom is at a premium, as with most compacts, but not terrible and is mitigated by the excellent head and shoulder room the Golf offers. The rear seats are split-fold to expand cargo space when needed.

The cargo space in the 2018 Golf R is very good at 22.8 cubic feet with the rear seats up. That expands to 52.7 when the seats are down, but the rear seats don't fold completely flat in the R thanks to heavier side bolstering. The hatch opens wide and tall, allowing easier access to get things into and out of the back cargo area.

Volkswagen has come a long way in terms of technology offerings. The 2018 Golf R has VW's best infotainment option available today and on a new, larger 8-inch touchscreen. This screen replaces the smaller 6.5 found in other Golf models and the previous 7-inch upgrade option. Standard are Android Auto, Apple CarPlay, and MirrorLink. The rearview camera on the Golf R is a bit grainy, but good enough for the job thanks to the larger screen.

We're fond of the infotainment for its ease of use and general usefulness. Volkswagen's Car-Net AppConnect is also a nice system, adding more smartphone integration and options. The infotainment interface can get confusing with Car-Net, but does allow two smartphones to be paired simultaneously, allowing a passenger to manipulate the entertainment goings on.

Overall, the infotainment in the VW Golf R is better than most on the market right now.

Considering its robust power output and sport-centric underpinnings, it's hard to imagine that the 2018 Volkswagen Golf R is a real fuel-sipper. Its small size, smart design, and excellent new automatic transmission pay off, though, giving the R an EPA-estimated 22 mpg in the city and 29 mpg on the highway. Those numbers drop a bit for the manual transmission.

For reference, the standard VW Golf is EPA-rated at 24 mpg in the city and 33 mpg on the highway and has just over half of the R's performance metric. 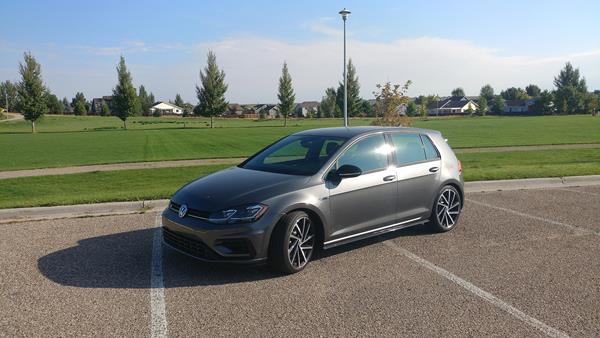 The 2018 Volkswagen Golf R is rated in lump with the rest of the Golf models in the J.D. Power and Associates Vehicle Dependability Study. That study found the Golf to be "About Average" in reliability expectation amongst buyers. As of this writing, the Golf has two general recalls this year, one of which is for the brakes on the standard model, so it doesn't apply to the R.

The Golf R is rated alongside the other Volkswagen Golf models by the two major safety testing organizations for automotive in the United States. The National Highway Traffic Safety Administration has awarded the 2018 Golf a 5-Star overall rating for crashworthiness, including four stars for frontal crash and rollover and five stars for side crash tests.

The Insurance Institute for Highway Safety (IIHS) has given the Golf a top rating of "Good" on all crash tests conducted. With the exception of the passenger-side small overlap front test, which received an "Acceptable" rating.

Front and rear parking sensors, forward collision warning with pedestrian detection, blind-spot monitoring with rear cross-traffic alert, and a lane departure warning system are all standard in the Golf R.

There's nothing but good to say about the 2018 Volkswagen Golf R's performance. The little car produces 292 horsepower through its 2.0-liter turbocharged four-cylinder engine. The six-speed manual transmission is more fun to drive with, but the new seven-speed automatic is well-tuned for the engine and makes the car more efficient and practical. Choices, choices.

The powertrain also comes standard as all-wheel drive, generally in a front-biased design for torque delivery. The little Golf R accelerates very nicely, with a little turbo lag at the get-go, but not for long. It moves through the MPG counts quickly too, with 0-60 mph sprints happening in under 5 seconds using launch control (standard with the automatic). That's on par with its nearest competitor.

Where the Golf R really comes into it, though, is in cornering and on light dirt. In the corners, the R goes naturally into its lane with a strong feel and stable demeanor. It may not look like it, but the 2018 Volkswagen Golf R is a lot of fun to drive. 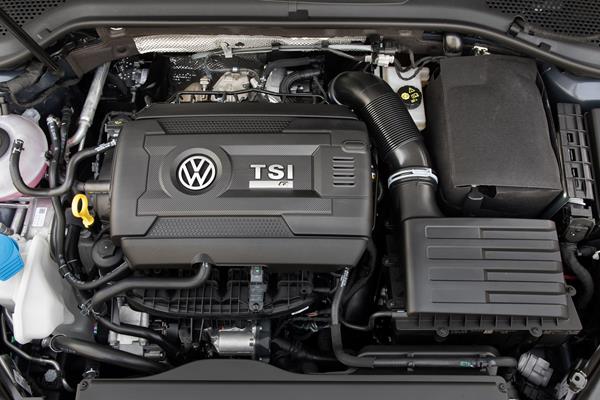 With "value," things get dicey for the Golf R. It's the most expensive Golf in the lineup at about double the price of the base model. Yet most who are considering the R are probably looking at several hatchbacks in the category with similar performance metrics. All of those competitors will be priced similar to the Golf R. On that end, it's not a bad deal.

Compared to the Golf GTI, the Golf R is expensive, but the add-ons for the price are a good value if the buyer is more interested in the higher engine output and better performance of the all-wheel drive powertrain. The R also comes standard with several advanced features, like adaptive cruise control, that are not standard in the GTI. These add a lot of daily livability to the R. 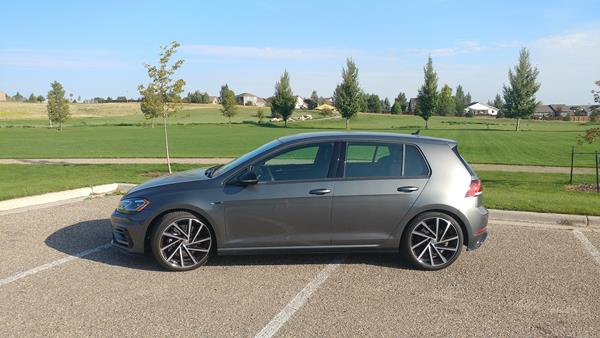 The 2018 Volkswagen Golf R and its GTI stablemate are two of the longest-running performance hatchbacks in the compact category. Competing against the R are models like the Subaru WRX, BMW MINI, and the Subaru STI. Of those competitors, only the STI is truly on par with the Golf R in terms of capability. The choice between the two will largely come down to style and expectation. The Subaru STI is made primarily for on-off-road rally racing and is much more rough and stiff on the road than is the Golf R. The Subaru's build and components are tougher as well, meant to absorb more abuse, but the R has a lot more street-racing credibility and is less in-your-face about its performance.

The 2018 Volkswagen Golf R is largely unsurpassed in the compact hatchback arena and offers a great mixture of daily driveability and extreme fun.