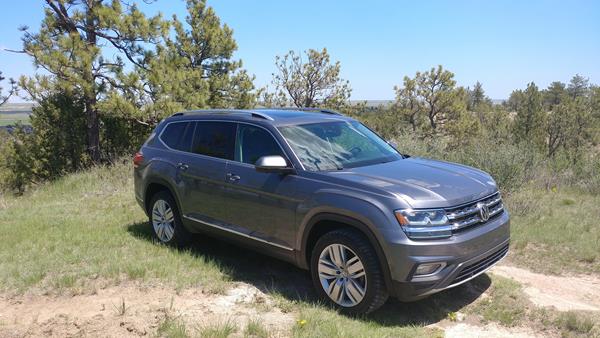 The 2018 Volkswagen Atlas is an all-new three-row crossover from VW that was designed by its U.S. operations arm for sale in North America. The Atlas slots between the compact Tiguan and the more expensive Touareg as a midsize three-row offering. The 2018 Atlas is roomy, efficient, and very nicely done.

On the exterior, the VW Atlas has a look more in line with the Tiguan, with bold body lines that aren't subtle about their movement. The Atlas is possibly the most aggressive Volkswagen in terms of styling, in fact, with a strong curb presence at all angles. These lines aren't over the top, however, and retain the Teutonic simplicity that the company is most well known for.

Inside, the Atlas is still a VW, using function to define form without losing comfort or quality. Technology is also a good bet in the Atlas, as are family ergonomics and road dynamics. While the Atlas isn't going to take any checkered flags or wow anyone with any tire-peeling stunts, its six-cylinder engine option is more than enough to get the job done while toting a full load of people.

The new 2018 Atlas is offered in five trim levels with two engine options and either front-wheel or all-wheel drive. The Atlas is a three-row crossover, seating up to seven.


What We Love About the 2018 Volkswagen Atlas:


What We Don't Love About the 2018 Volkswagen Atlas: 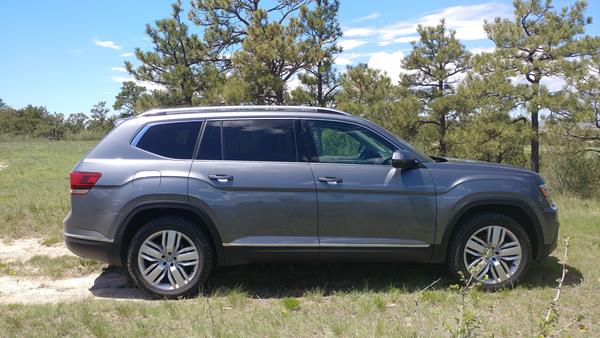 We like the beefy curb appeal Volkswagen has given the 2018 Atlas. Strong fenders, a flat no-nonsense hood, and a wide grille mark the Atlas as more SUV than crossover and help emphasize its relatively large size when compared to other VW models.

The flat grille has an inner mesh that sits behind a two-slat horizontal cage, flanked to either side by large headlamps. The hood falls over the top of the grille in a flat line and below the grille, a wide bumper and thin intake finish the fascia.

The flat hood is cut with several running lines going back to the windscreen, adding some stylish forward movement and helping to emphasize the light bulges given to the fenders for emphasis. The curved bulge over the front fender mimics the wheel well lines below and then straightens out at the mirrors ro run along the doors to the rear, where the curve starts again over that well. This continuous line defines the front-to-rear edging of the Atlas.

Above, the roofline runs almost flat, but gently slopes downward to create a light pinch from the greenhouse line below it, which rises up and then angles at the rear window. This creates a sporty profile for the 2018 Volkswagen Atlas, and counters the slight rise in the lower edge of the bodywork, which creates a slightly forward-tilted stance for the crossover.

Ground clearance is high in the Atlas and wheel well gaps are also thick, creating more capability cred. The rear hatch is angled slightly at the window and then drops flat from there to the rear bumper. This creates a large storage space inside and gives the 2018 Atlas a strong look.

We like the overall design of the 2018 Volkswagen Atlas and find it very well done. 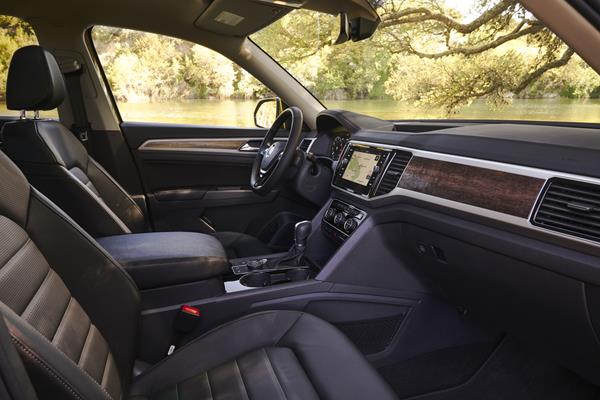 Inside, the 2018 Atlas has a nicely thought out layout, aimed towards maximizing interior space and comfort. Materials quality throughout the Volkswagen is good, though nothing much jumps out as "upscale" or particularly luxurious. This is in keeping with the usual simplicity which VW aims towards, letting design be largely defined by function and ergonomics.

Compared to most midsize crossovers, the Atlas has a surprisingly easy entry and egress height that is almost sill-less, making stepping in or out trip-free and effortless. Access to the third row is via the sliding-tilting second-row seat, but is still mostly relegated to children rather than adults. The third row itself is not small, but it is only marginally adult-friendly due to the somewhat narrow access. That's about par for this class of vehicle.

The second-row bench is very well done in a 60/40 split-fold configuration that also slides fore and aft several inches to offer more legroom there or behind. The seat backs also tilt for better seating position and the middle seat is comfortable enough that most riders will not find it cramped.

In front, the driver and passenger have excellent seating with plenty of cushion and bolstering. A raise/lower driver's seat is standard in the Atlas and allows even the tallest passenger to have a good view of the road without bumping the ceiling. Roominess up front is very good with plenty of legroom and lots of shoulder room in the big Volkswagen.

The controls layout in the 2018 Atlas is nicely done with good access to most common controls and smart access to the infotainment as well. We aren't fans of VW's cruise control dongle setup, but that's something most drivers will get used to as a unique "Volkswagen thing."

Cargo space in the 2018 Volkswagen Atlas is good too. There are 20.6 cubic feet of space behind the third row and 96.8 cubic feet with the second and third rows folded. What's lacking are clever gadget and stuff storage cubbies, though the center bin and front console's phone tray are high points. In trim levels or package options with the improved infotainment, USB ports are also plentiful in the big Atlas. 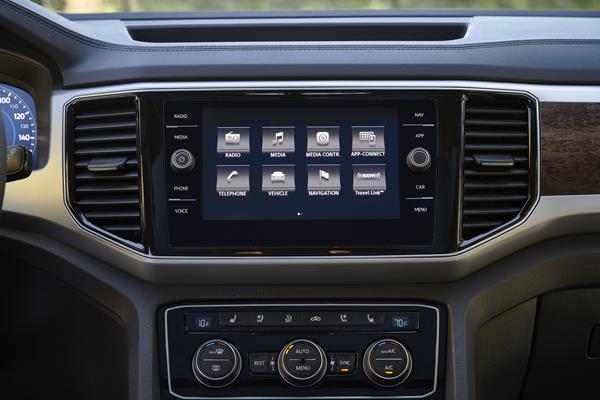 The base model 2018 Volkswagen Atlas comes standard with a 6.5-inch touchscreen that includes Android Auto and Apple CarPlay to go along with Bluetooth connectivity.

The upgrade option for the Atlas brings an 8-inch touchscreen to the infotainment. This adds easier readability and faster responses for the infotainment system. Other options like navigation and the like are also available.

With everything upgraded, the tech in the 2018 Atlas is very good. Responses are quick and usability is good. VW's menu systems are easy to navigate and the learning curve is short. Functionality such as streaming apps and phone control for voice commands are nicely done as well.

Fuel economy estimates for the Atlas are on par or better than competitors. They do not necessarily translate into the real world, however, especially with the four-cylinder base engine. That engine is EPA rated at 22 mpg in the city and 26 mpg on the highway. Most will likely see a couple of points lower than those numbers given the generally underpowered nature of the four-cylinder versus the Atlas' large size.

The six-cylinder is a better match for the Atlas and offers 18 mpg in the city and 25 mpg on the highway. Those numbers are more realistic and our time in the 2018 Atlas with the V6 proved them to be close to accurate. We averaged 21 mpg overall at high altitude (over 4,800 feet) and with a mix of passenger loads. 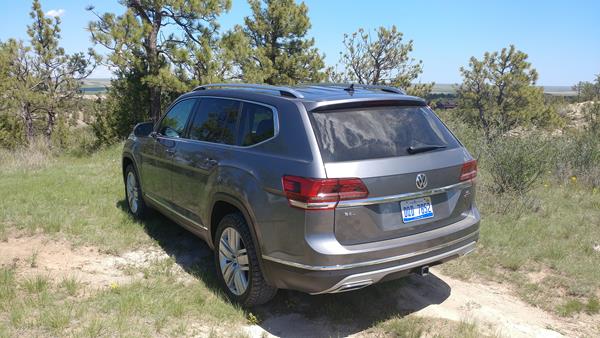 This being the first year for the 2018 Atlas, there have been some bumps in its road. The Atlas receives an "About Average" score from the J.D. Power and Associates Vehicle Dependability Study. The Atlas has also been the subject of three recalls, as of this writing, all of which were for likely manufacturing growing pains. Two were for fuel system issues and one was for seatbelts. We expect Volkswagen will have gotten the kinks out of the Atlas by next model year.

The 2018 Atlas has done very well in crash testing. The National Highway Traffic Safety Administration (NHTSA) has given the 2018 Volkswagen Atlas a 5-Star overall rating for crash worthiness. Both frontal and side crash results were awarded five stars while rollover was given four.

The Insurance Institute for Highway Safety (IIHS) has, similarly, given the 2018 Atlas high marks for crash test results. All crash tests scored thus far have received top ratings of "Good." It also received a Superior rating for front crash protection when advanced safety technologies are equipped. We also note that because of scoring changes made by the IIHS, the Atlas does not qualify for a Top Safety Pick status, but would have in 2017.

The performance metrics for the 2018 Volkswagen Atlas are a mixed bag. The base four-cylinder engine, which we drove only briefly, is a 2.0-liter turbocharged engine that outputs 235 horsepower to an eight-speed automatic transmission. While the transmission is very well done, shiftly smoothly and quickly, the four-cylinder is often underpowered for the Atlas' bulk. Around town in everyday driving, the 2.0 does fine, but on the highway or when under any kind of load (several passengers, cargo), the Atlas feels bogged down in this configuration.

The upgrade engine is a more moderate V6 with and output of 276 horses into the same eight-speed auto trans. That 3.6-liter engine is a much better match for the Atlas and offers smooth acceleration and little complaint when the vehicle is loaded. With a full house of six passengers in the 2018 Atlas V6, we felt confident on the highway, up hills, and through town thanks to the V6's solid and predictable power delivery. 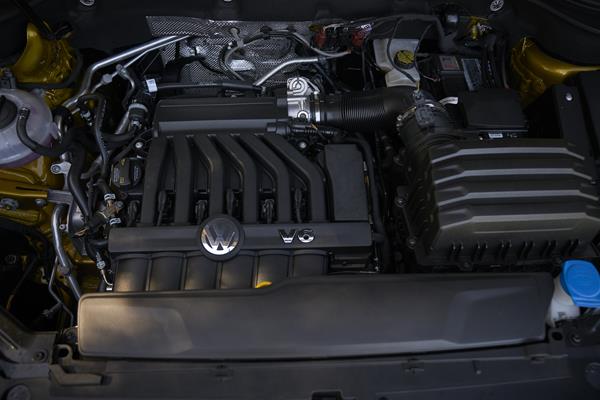 Off the road, our all-wheel drive-equipped 2018 Atlas was as capable as any other vehicle in its class. Light off-road duties are undertaken without complaint by the Atlas and some of our testing indicated that in inclement weather, the Atlas will also do well. Volkswagen has a history with AWD that goes back some time and with good results. That's reflected in the Atlas' capabilities.

The 2018 Volkswagen Atlas is well designed for its job. It handles well, is maneuverable in reasonable situations, and carries itself well in regular daily driving. The all-wheel drive system is nicely done as well. The overall appeal to the Atlas on the road is that it feels smaller than it is, in terms of driving, and it absorbs most road bumps smoothly. A high point is the responsive, engaging steering system which translates information to the driver well without feeling heavy or taxing.

The 2018 Atlas is well-priced for the class in most of its trims. Most buyers will be happiest in a mid-level V6-powered model, which begins around $31,000 and which comes well-equipped (including AWD "4Motion") at under $34,000.

Getting a good deal on the Atlas in this, its inaugural year, is not likely to happen through a dealership. Most buyers, however, will be happy to pay full price given the Atlas' excellent design and good value proposition for equipment included. 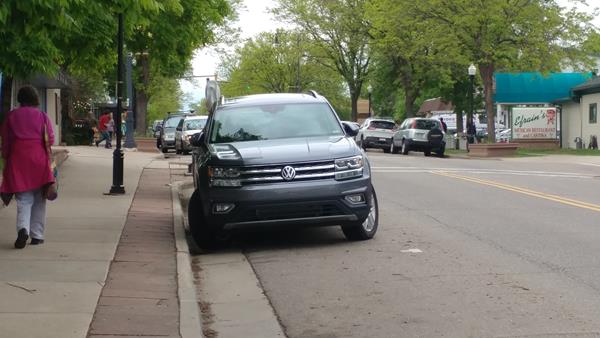 The 2018 Volkswagen Atlas sits in the midsize three-row crossover class, which has several excellent options for buyers to choose from. While the Atlas ranks well, it's competing against other vehicles that also rank very well. Finding the right match will be about style and expectation rather than an arbitrary "one is better because." For that reason, we give competitive options here that are all equal to the Atlas on most fronts and perhaps better or worse on a few points.

The 2018 Chevrolet Traverse and its Buick Enclave near-twin are excellent choices in the three-row market, offering good drive quality, excellent interior ergonomics, and a solid value proposition. The Atlas has a beefier design quality and more traditional appeal to its SUV-like proportions, compared to the Traverse/Enclave, and is generally a bit cheaper on the buy. Also competitive is the excellent Toyota Highlander, which has the excellent interior and square-built design as high points but which can get expensive quickly. Other options include the wonder drive quality of the Mazda CX-9 and the lower-cost, but not cheaper Kia Sorento.

With all of this pulled together, though, it's tough to ignore the excellence to be found in the 2018 VW Atlas. This crossover has everything going for it and not many faults. As a new alternative in the competitive three-row midsize class, the Atlas really hits a bullseye.