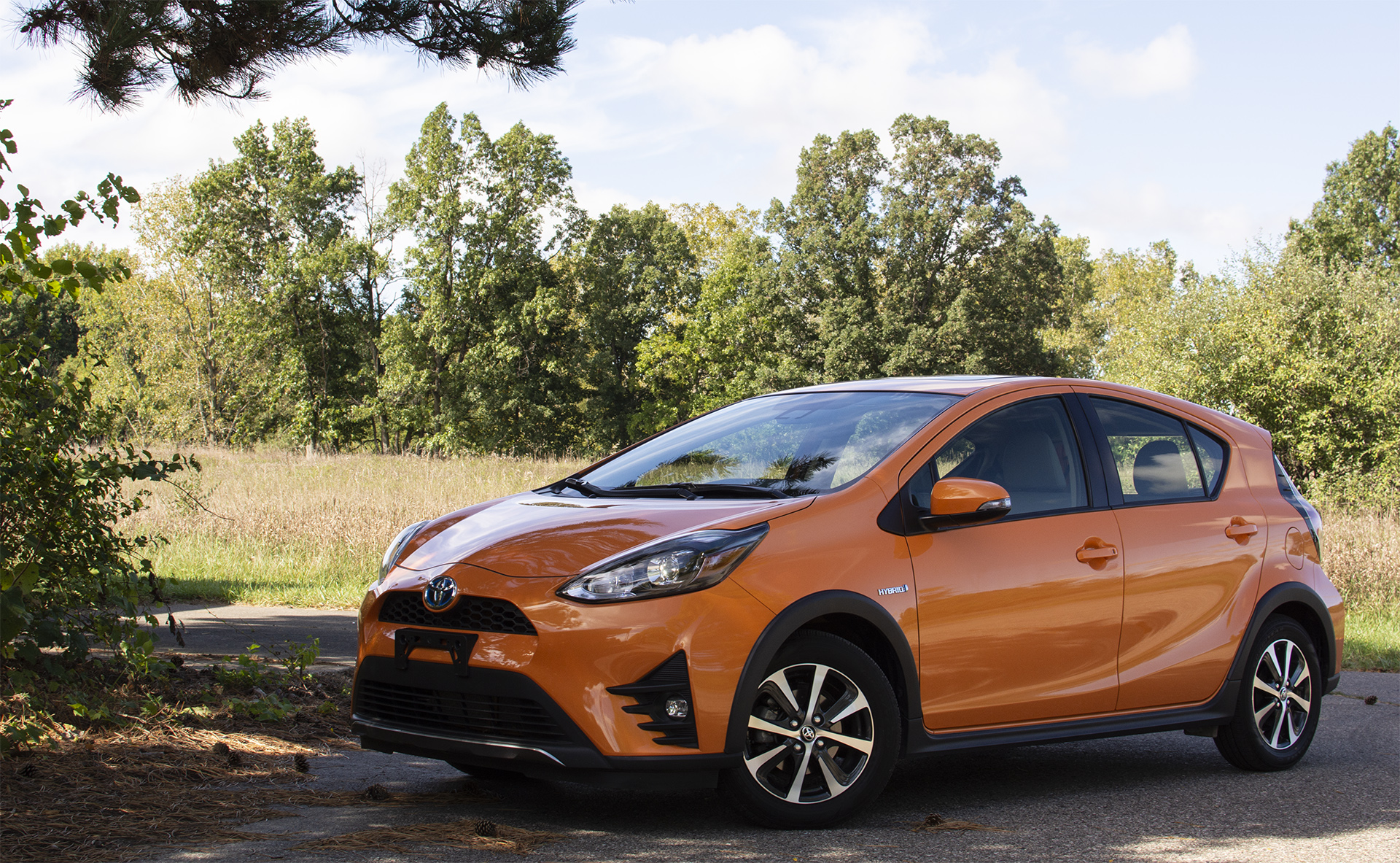 The Toyota Prius C is the brand's least-expensive hybrid model, which seems like a great idea. High fuel economy figures in a vehicle that doesn't break the bank. But as we found out during our weeklong test, the Prius C has some problems that make it tough to recommend.


What We Love About the Toyota Prius C


What We Didn't Love About the Toyota Prius C 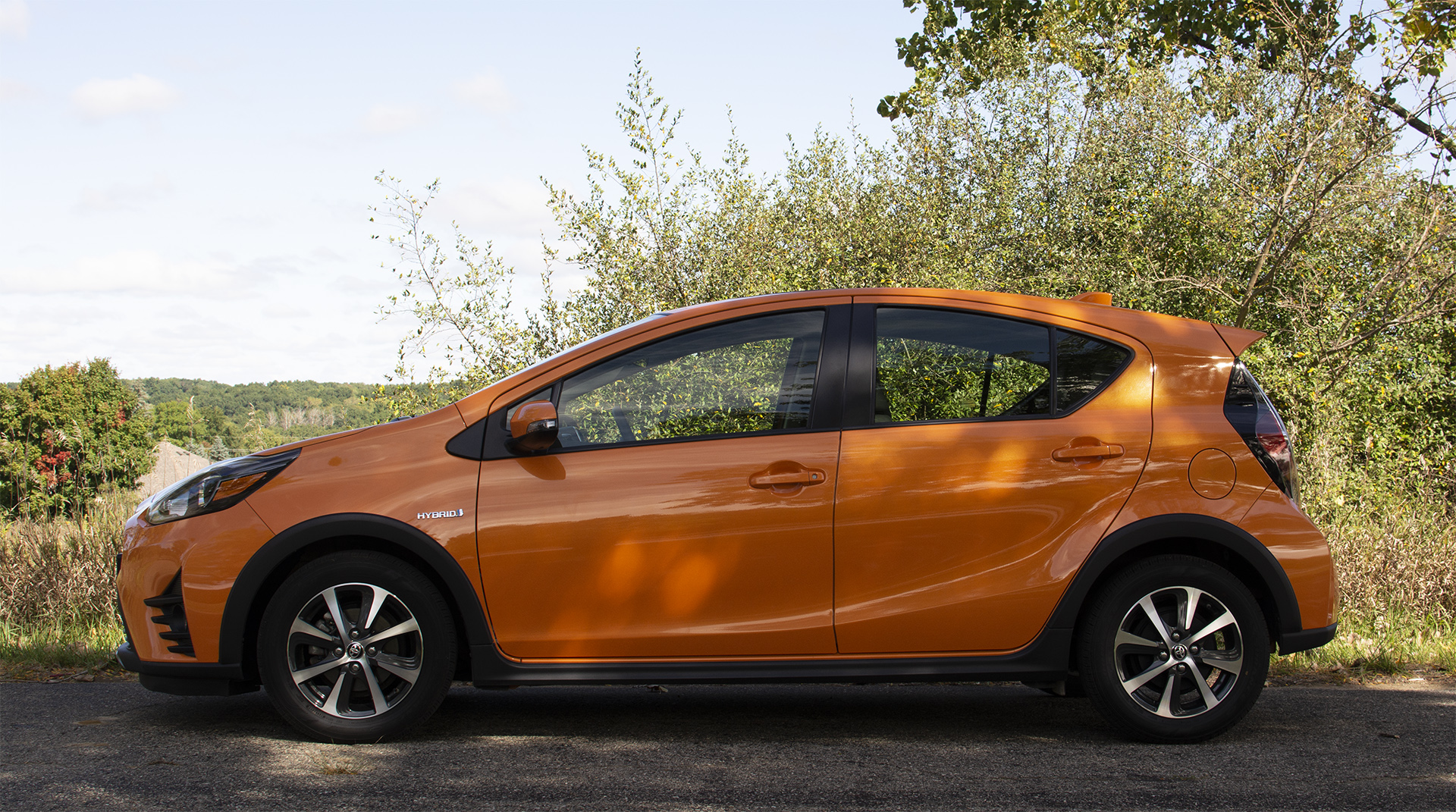 For 2018, Toyota has made some slight changes to the Prius C's design. Most apparent are the crossover-esq touches like the faux skid plates, black wheel arches, and roof rails. The front end has been altered slightly with a new shape for the hood and slimmed down grille. We like the changes as it helps give the Prius C a bit of personality. Plus, Toyota has a range of vibrant colors available like this Tangerine Orange on our tester. 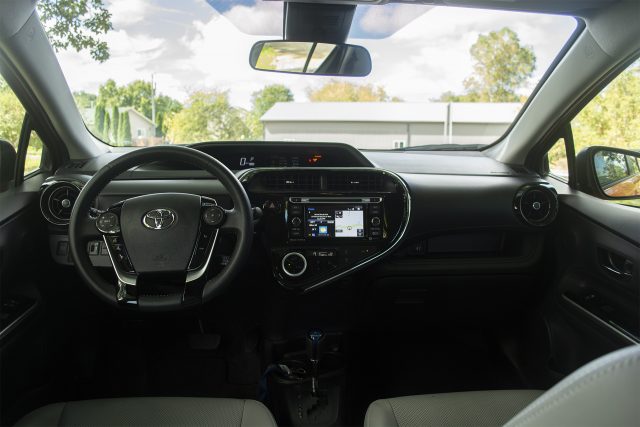 Interior Comfort, Quality and Ease of Use (6/10)

The interior design of the Prius C is quite odd. It may not have some the wackiness found in the regular Prius, but some of the choices made by Toyota left us scratching our heads. For example, behind the steering wheel is a storage shelf. What do you put in there aside from spare change or snacks to eat while driving? The location USB/Aux jack on the passenger side of the dash means you'll need to have long cables if you want easy access to your device. Almost all of the materials used for the Prius C's interior are hard plastic. We would be giving this pass considering the low starting price of $20,630 and how the model is positioned as an entry-level model. But our tester was over $26,000, which makes us wonder why didn't Toyota stick some soft-touch materials to help soften the blow to the waller.

Toyota's SofTex synthetic leather is standard on our top-line Four tester. Lower trims make do with fabric upholstering. We like the soft padding and decent support of the front seats. However, finding a comfortable position proved to be difficult as the manual adjustments weren't the smoothest to operate. It took us a few days to find a position that didn't cause us to constantly fidget around. The back seat provides decent headroom due to the tall roof. But legroom is quite tight for tall passengers. Cargo space measures out to 17.1 cubic feet behind the rear seats, quite large for a subcompact. This can be expanded by folding the rear seat. 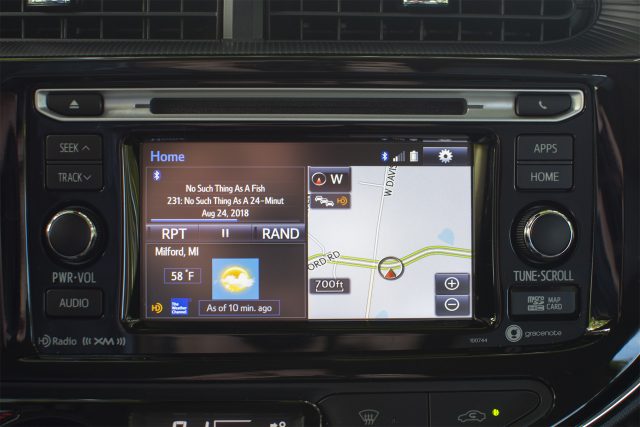 All Prius Cs come equipped with a 6.1-inch touchscreen featuring Toyota's Entune infotainment system. The Three and Four come with navigation as standard. The small size of the screen makes it hard to press some of the touchscreen buttons. But the screen redeems itself by being easy to read at a glance thanks to excellent brightness and clear text. The system is slightly slower than competitors as it takes a few milliseconds longer to change from different menu functions.

Apple CarPlay and Android Auto are not available on the Prius C. 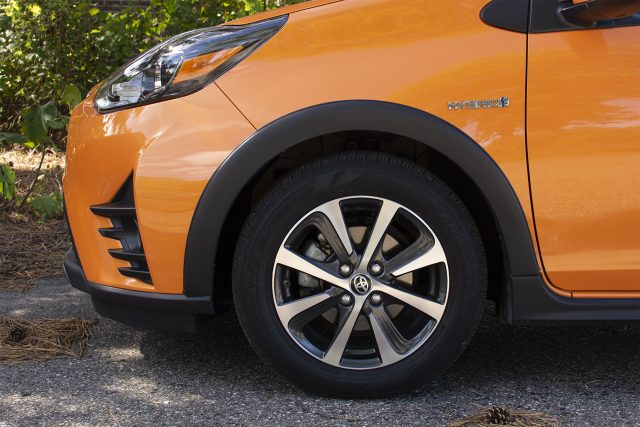 The 2018 Toyota Prius has EPA fuel economy figures of 48 City/43 Highway/46 Combined. The numbers are quite disappointing when compared to the larger Prius - 54/50/52. Our average for the week landed at 49.6 mpg in mostly city driving.

The National Highway Traffic Safety Administration (NHTSA) awarded the Prius C with a four-star overall rating. In the Insurance Institute for Highway Safety (IIHS) tests, the Prius C scored the group's highest rating of "Good" in most of the tests. The only one where the model faltered was in the small overlap front test where it earned an "Acceptable" rating. 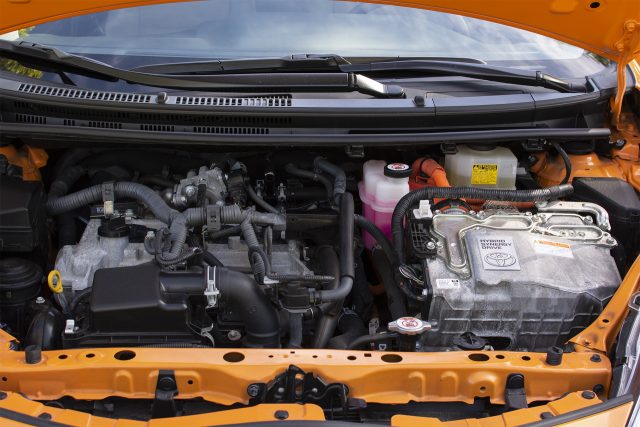 Power for the Prius C comes from a hybrid system comprised of a 1.5L Atkinson Cycle four-cylinder, 45 kW electric motor, Nickel-Metal Hydride battery pack, and a CVT. Total output is rated at 99 horsepower.

If most of your driving takes place in an urban area, then the low power output of the Prius C isn't a problem. At speeds under 45 mph, the hybrid powertrain gets the vehicle moving a decent clip. Be aware that a fair amount of buzzing from the engine and CVT will come inside. There is an EV mode that allows the Prius C to travel a short distance on electric power only but only at speeds below 25 mph. But if most of your driving takes place in the suburbs or highways, then you should look at another vehicle. The limited performance of the hybrid powertrain is very apparent as it takes over 12 seconds to hit 60 mph. Not helping is the abundance of engine and CVT noise coming inside the cabin.

Handling is a bright spot in the Prius C. Despite the low-rolling resistance tires which will cry foul if you push it, the Prius C shows excellent body control. The small size and tight turning radius of the Prius C make it a perfect car for urban areas. Ride quality is so-so. Small bumps are isolated, but larger bumps will make their way inside. A large amount of road and wind noise makes its way inside, so be prepared to turn the radio up to help drown out some of the noise.

The 2018 Toyota Prius C begins at $20,630 for the base One. Our Four tester begins at $24,965 and comes to an as-tested price of $26,479 with a few options. This is a tough sell when you take into consideration that you can get into a well-equipped Toyota Prius or Hyundai Ioniq for similar money and get better fuel economy figures. If you really have your headset on getting a Prius C, the Two at $21,430 is our pick as it provides decent value and features you want such as a six-speaker audio system and 60/40 split-folding rear seat. 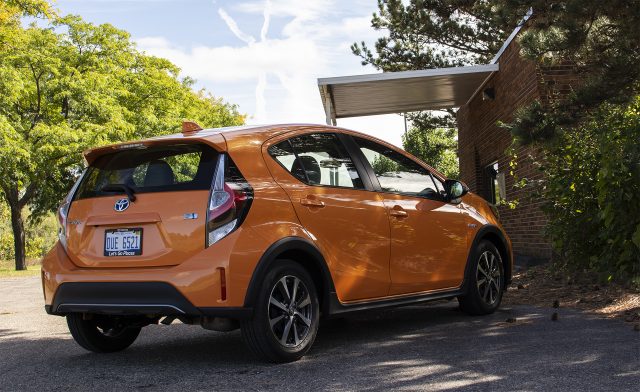 The Toyota Prius is a larger vehicle than the Prius C, yet returns higher fuel economy. It also boasts more space for passengers and cargo. There are some downsides such as the higher base price of $23,475 and the futuristic styling that may put some people off. Hyundai's brand new Ioniq is about $1,400 more than the Prius C, yet returns better fuel economy figures and comes jam-packed with standard features. The Ioniq also scores much higher in terms of safety than the Prius C. Be aware that the Ioniq does have a small back seat.

When the Prius C was launched in 2012, the model made a lot of sense. It offered many benefits of a hybrid such as high fuel economy figures at a low price. But time can be a cruel mistress, especially when an automaker doesn't make any significant changes to a model. That is the case with the Prius C. The model has almost been forgotten by Toyota, with the only major changes being the exterior and safety equipment for 2018. It shows in terms of the overall performance and fuel economy figures. Unless you can get a good deal on the Prius C, we would recommend skipping it.