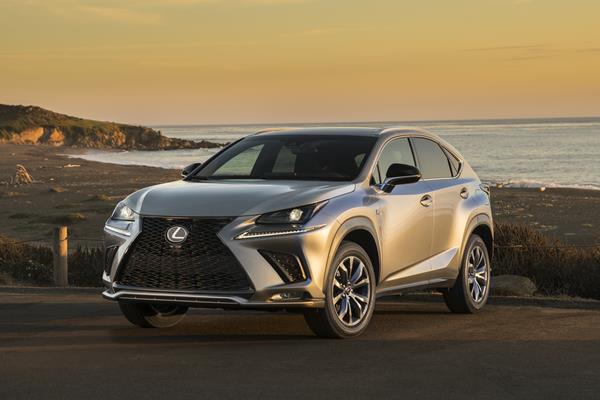 Formerly the NX 200t, the NX 300 is the small luxury crossover from Toyota's premium brand. The Lexus NX 300 slots just underneath the larger RX series and offers what Lexus is best known for: right-sized luxury with an emphasis on interior comfort.

Styling for the 2018 NX is sporty and upscale, helping to minimize the crossovers diminutive size without losing sight of its inherent strengths that come from that small footprint. Interior space is focused on passengers rather than cargo and drive quality is aimed towards realism instead of dynamism.

The 2018 Lexus NX 300 offers a smart mix that many will find appealing. The five-passenger compact crossover comes in two trim levels and a hybrid option. Front-wheel drive is standard and all-wheel drive is optional. 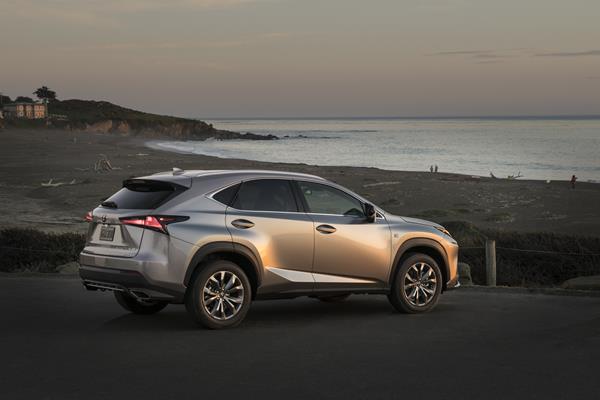 The 2018 Lexus NX has a very sharp look with some great design dimensions. It's hampered by a large, polarizing front grille, which starts the angular edges uses to make the sharp points of the NX's motif.

Lexus has aimed towards auto show concept looks for its branding and the NX 300 carries that pretty well. Lots of angles and sharp edges, while a bit busy on the small crossover, create a stylistic feel that's cutting-edge rather than contemporary. This helps the 2018 NX stand out from its peers.

Curb appeal is strong with the NX, which also sports a lot of clearance between wheels and wells and the ground and bodywork. This extra height doesn't affect step-in or comfort for the NX, but imparts a more rugged element to the crossover's persona. That and the well-defined fenders and sporty rear shaping give the 2018 Lexus NX 300 a strong presence.

Were it not for that gaping maw of a grille, the NX might be a perfect 10.

The interior of the 2018 NX is very well done, insofar as design, comfort, and passenger space is concerned. The tradeoff for those items is the smaller cargo space in the NX, which is serviceable, but not as useful or versatile as will be found in similar-sized competitors. For those who don't need cargo space as a primary concern and are more interested in maximum passenger space instead, the 2018 Lexus NX will fit nicely.

The front driver's and passenger's seats are very well done with a lot of adjustment options and plenty of leg, knee, shoulder, and headroom. The driver is treated to a well-cushioned seat that conforms well to one's body dimensions. Controls are easy to reach and intuitive and gauges are easy to see in most lighting situations. Storage space up front is good, though a bit cramped due to the NX's small size. 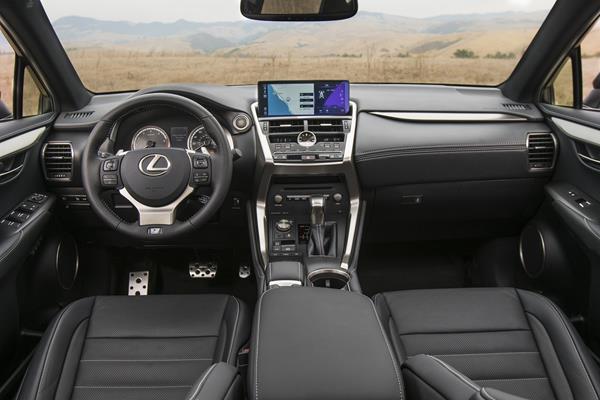 The rear seating is also very good with plenty of room for two in the outboard positions and enough space in between for a third when required. That center position is for short trips only, though, as it's not comfortable enough for long drives. At least when it comes to adults. For kids, three across (assuming two or less booster or child safety seats) is a great fit in the NX. Getting three child safety seats across is possible, but will require some engineering to make it happen. We note that the position of the seatbelt for the middle position and the slightly boosted seat cushion help to hasten the departure from a booster seat requirement.

Things change in the 2018 Lexus NX when the F Sport package is chosen. We'd lower the comfort ratings for much of the seating with the sport seats, which are heavily bolstered and not very comfortable. They also make getting in and out of the crossover more difficult than it should be.

Cargo space in the 2018 NX is OK, but not all that large. The NX has one of the smallest cargo spaces in its class at 17.7 cubic feet, most of which is floor space impeded by a hard slope to the rear window. The rear seats fold as standard, but do not fold completely flat (especially in the F Sport edition) and the tight hatch/rear window make getting bulky items into the NX almost impossible.

The 2018 Lexus NX includes the latest from the brand's Entune infotainment software. There are no smartphone integration apps like Apple CarPlay or Android Auto included and Toyota's Lexus-branded app that attempts to mimic those largely fails to do so very well. The Remote Touch interface uses a trackpad interface that is both clunky to use and difficult to learn to control.

The overall impression with the Lexus NX's infotainment is that of a mashup of an old-style Atari-like screen interface matched to a poorly-designed laptop computer trackpad, resulting in herky-jerky movements on-screen and frustration for all but those sincerely dedicated to forcing this getup to work for them. Perhaps someday Lexus will hire engineers who weren't trained to create user interfaces in the heyday of the 1980s computer revolution. 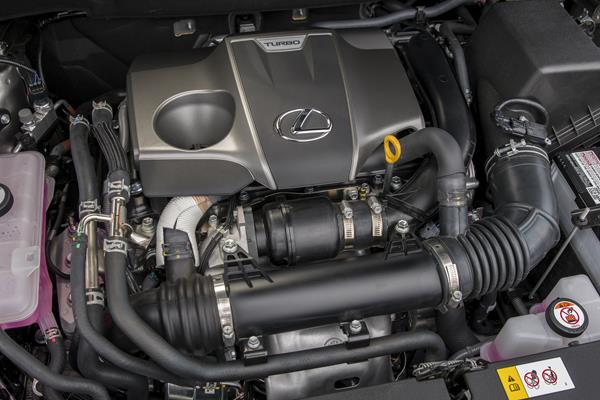 The fuel economy ratings for the 2018 Lexus NX 300 are good for the class at 22 mpg in the city and 28 mpg on the highway. In the real world, we achieved close to those with an average of 25 mpg overall in our week with the AWD version of the NX 300.

The 2018 Lexus NX is rated as "About Average" by the J.D. Power and Associates Vehicle Dependability Study. We raised its score, however, because a recent Consumer Reports list of manufacturers by rating posted Toyota/Lexus at the top and has consistently done so for some years. There have been no safety recalls for the NX 300 this year.

Both the National Highway Traffic Safety Administration (NHTSA) and the Insurance Institute for Highway Safety (IIHS) have given the 2018 Lexus NX high marks for safety. The NHTSA has given the NX a 5-Star overall rating for crashworthiness, with four stars each for frontal and rollover tests and five stars for side crash tests. The IIHS has given the NX top scores of "Good" on all of its crashworthiness tests.

The 2018 Lexus NX 300 was formerly the 200t, the "t" standing for "turbocharged." The same engine resides in the 300, a 2.0-liter turbo four-cylinder that outputs an astute 235 horsepower. It's a good amount of power for the NX and gets it around nimbly, though calling it "sporty" would be a bit of a stretch.

Handling in the Lexus NX 300 is also excellent, with a tight feel and good drive quality. Sport mode (one of three driver-selectable options) improves throttle response and transmission aggression, giving a fun appeal to the NX. Normal and Eco modes offer their own version of this. Most drivers will find a sweet spot for their daily drive. For us, around town was Sport mode territory for engagement behind the wheel and on the highway was Eco mode for maximum economy. The NX 300 is front-wheel drive as standard with an all-wheel drive upgrade option.

The hybrid mode, the NX 300h, has a completely different drivetrain comprised of a naturally aspirated 2.5-liter four-cylinder, a continuously variable transmission (CVT), and electric motors. These produce 194 horsepower and are geared towards maximizing fuel efficiency rather than sportiness. The 300h is noticeably more sluggish and less astute than is the turbocharged option, but it's hard to ignore the phenomenal fuel economy returns that result. The 300h is AWD as standard. 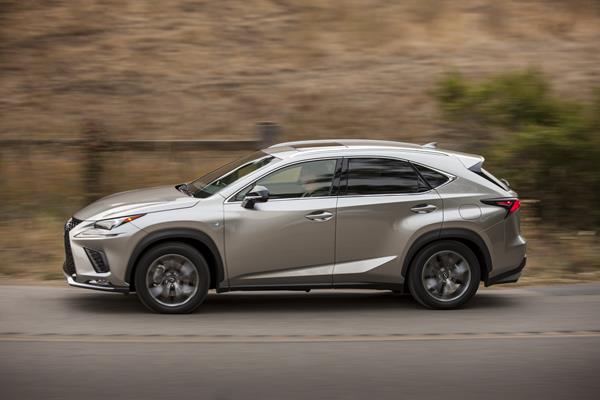 For those who don't need a lot of cargo utility and are primarily concerned with driveability, comfort, and passenger space, the 2018 Lexus NX is a perfect fit. Pricing for the NX is reasonable as well, with most buyers likely hitting the middle road at $37,000-$38,000 for their purchase, depending on options.

We would recommend that most buyers looking at the NX 300 stick with the standard packaging and add only the Comfort package for the extra comfort and convenience upgrades. We say the same for the 300h, which is good in its base level with the Comfort additions. Those wanting the next level should get the Luxury package instead, which combines two other packages for a better price point upgrade.

The luxury small crossover segment is growing quickly and several excellent choices proliferate this niche. The 2018 Lexus NX 300 is pitted against the very well-done BMW X1, the less visually appealing Buick Envision, and the sport-minded Acura RDX. Between these, the X1 and RDX are good choices against the NX and neither have the polarizing front grille the Lexus carries.

We'd give the 2018 Lexus NX a chance of being compelling enough against those other options to stay in the game. The NX can give what for to the others on its own merits, especially if interior comfort is the ultimate prize. The 2018 NX is an unusually value-oriented option in the luxury space and well worth keeping on a short list of options.