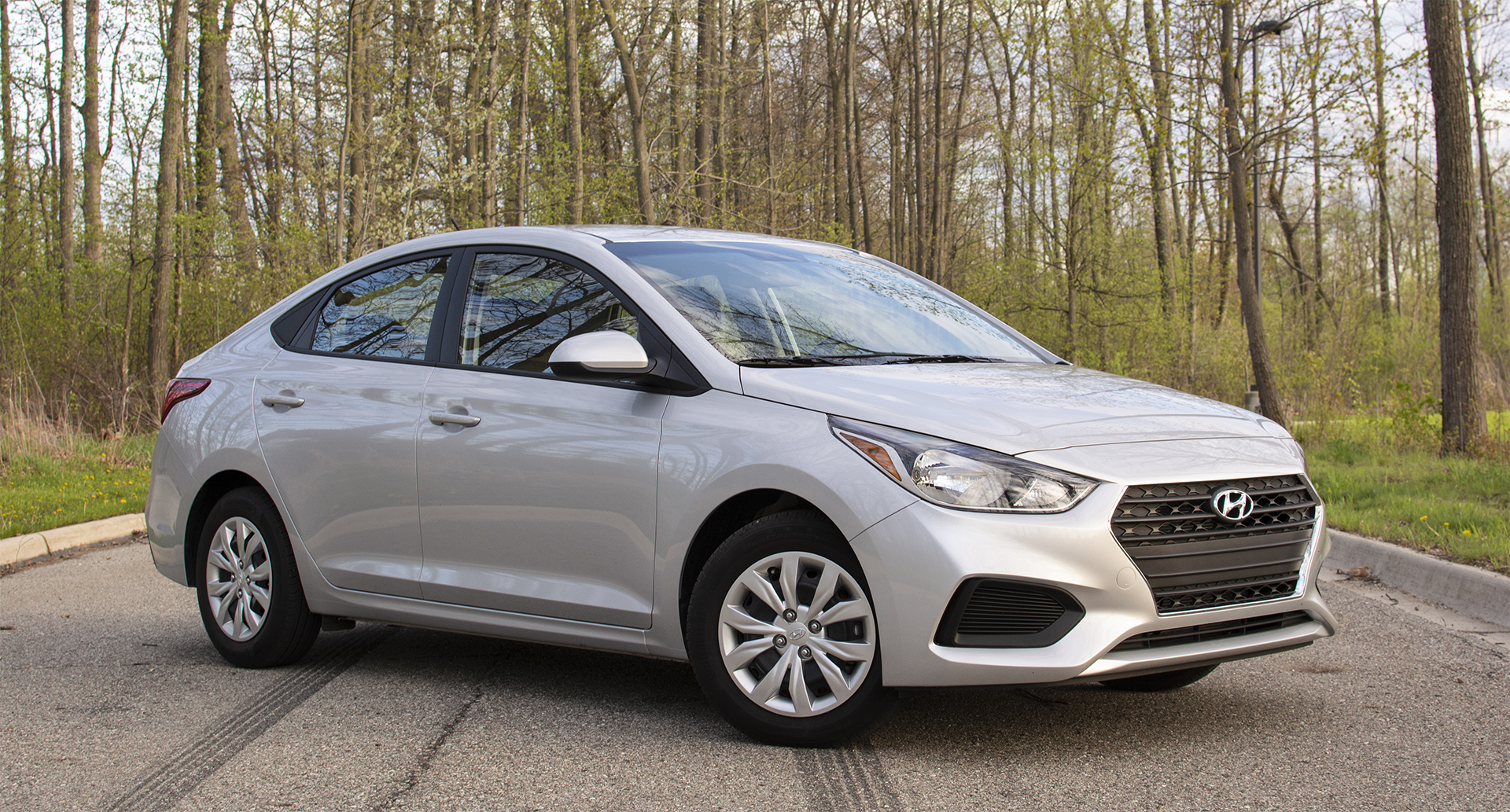 Subcompact cars are sometimes called penalty boxes, especially in their entry-level form. This is because they only offer the bare essentials, such as seats and manual windows, at a low price. But the past few years have seen automakers put more effort into their small vehicles. They have offered more daring designs, standard features and pleasant driving experiences.

A prime example of this is the 2018 Hyundai Accent. We spent a week in the base SE sedan and found it to be a very surprising subcompact.


What We Love About the 2018 Hyundai Accent:


What We Don't Love About the 2018 Hyundai Accent: 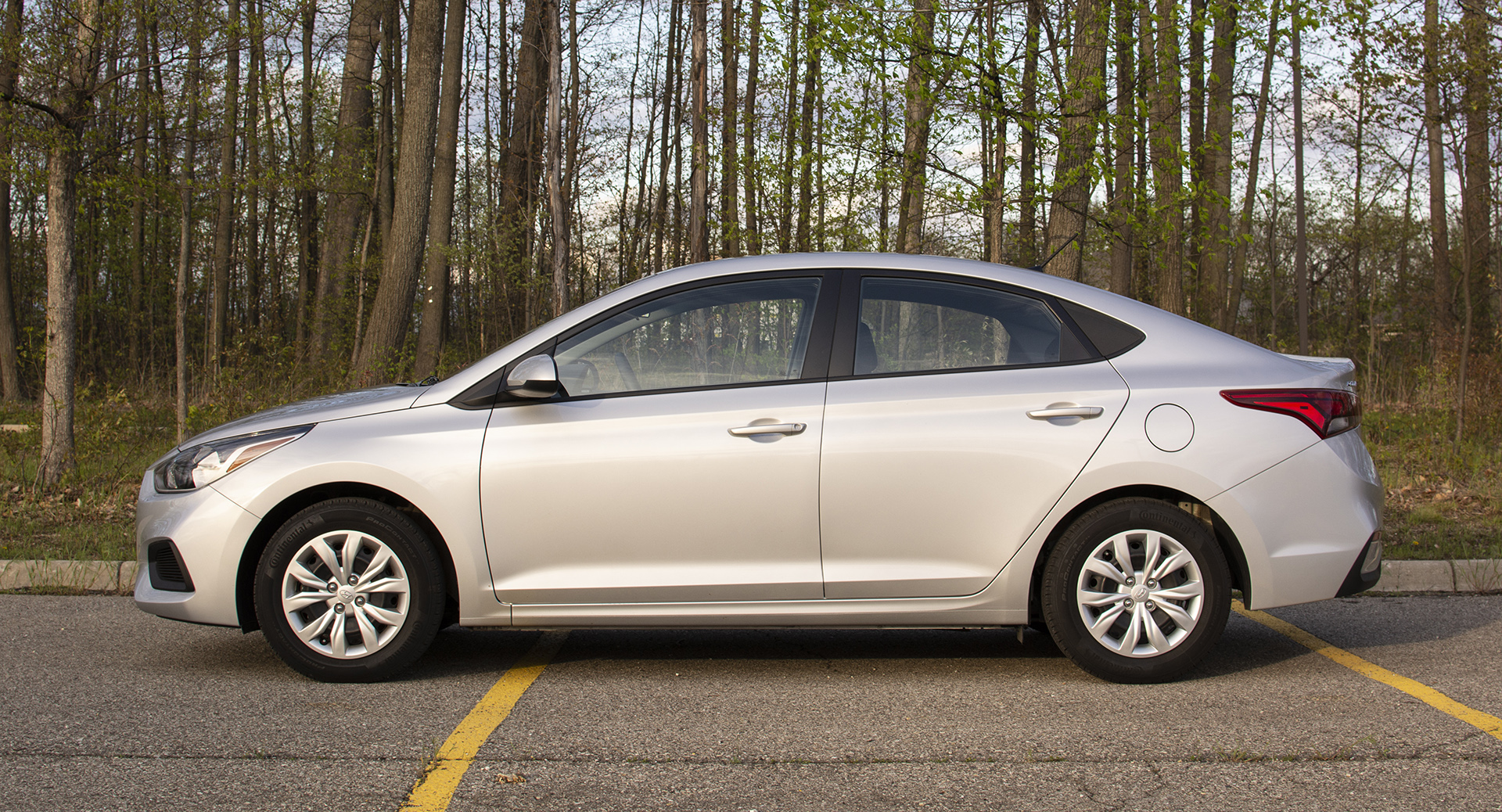 Styling was not at the top of Hyundai's priorities for the redesigned Accent. Park the 2018 model next to the 2017 and the only real change you'll notice is in the front. Hyundai installed its new six-sided grille insert that's used on new and redesigned models. There are also cutouts on the front bumper for either trim on our base SE tester or fog lights on higher models.

Hyundai is only offering the Accent as a sedan for this generation. If you really want a hatchback, then you should check out the sister model Kia Rio. 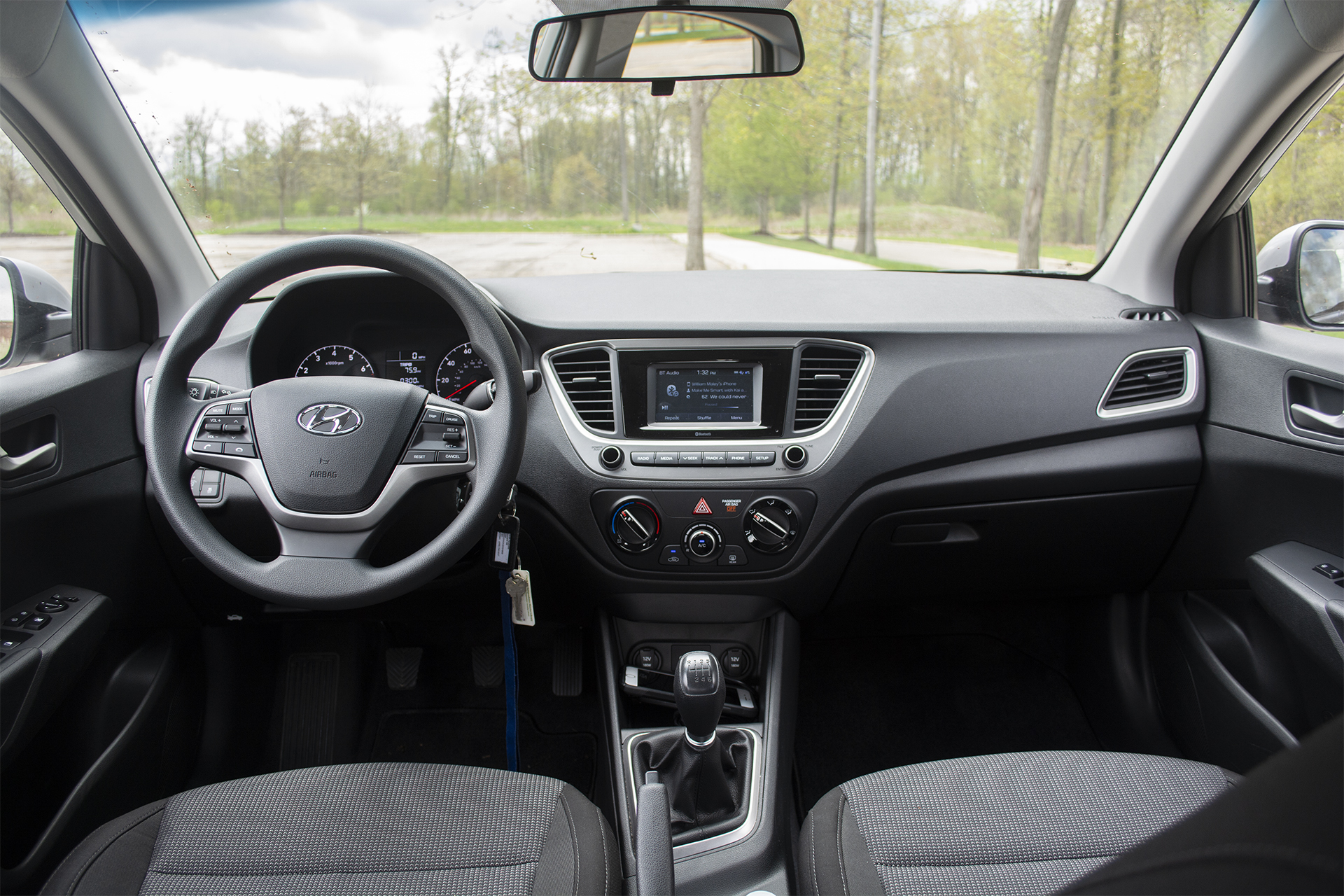 The Accent's interior doesn't have any frills or cheeky touches that you'll find on other subcompacts. Hyundai went with a design that's very user friendly, with controls in easy reach. There's little soft-touch material used in the Accent's interior, but the hard plastics have a grain texture to make it look somewhat premium. Hyundai didn't skimp on the quality of the hard plastics, as they have a solid feel when pressed.

The front seats offer the bare minimum of adjustment with fore/aft, height and recline. There is a decent amount of space, so even tall passengers will have no issue finding a comfortable position.

One disappointment in the Accent SE is the lack of a front armrest, which will annoy some drivers on long trips. To rectify this, you'll need to step up to the SEL or Limited. Space in the back seat is about average for a subcompact sedan; a decent amount of headroom, but very little room for legs. For a subcompact sedan, the Accent is just behind the Nissan Versa at 13.7 vs. 14.9 cubic feet. A 60/40 split folding rear seat is standard. 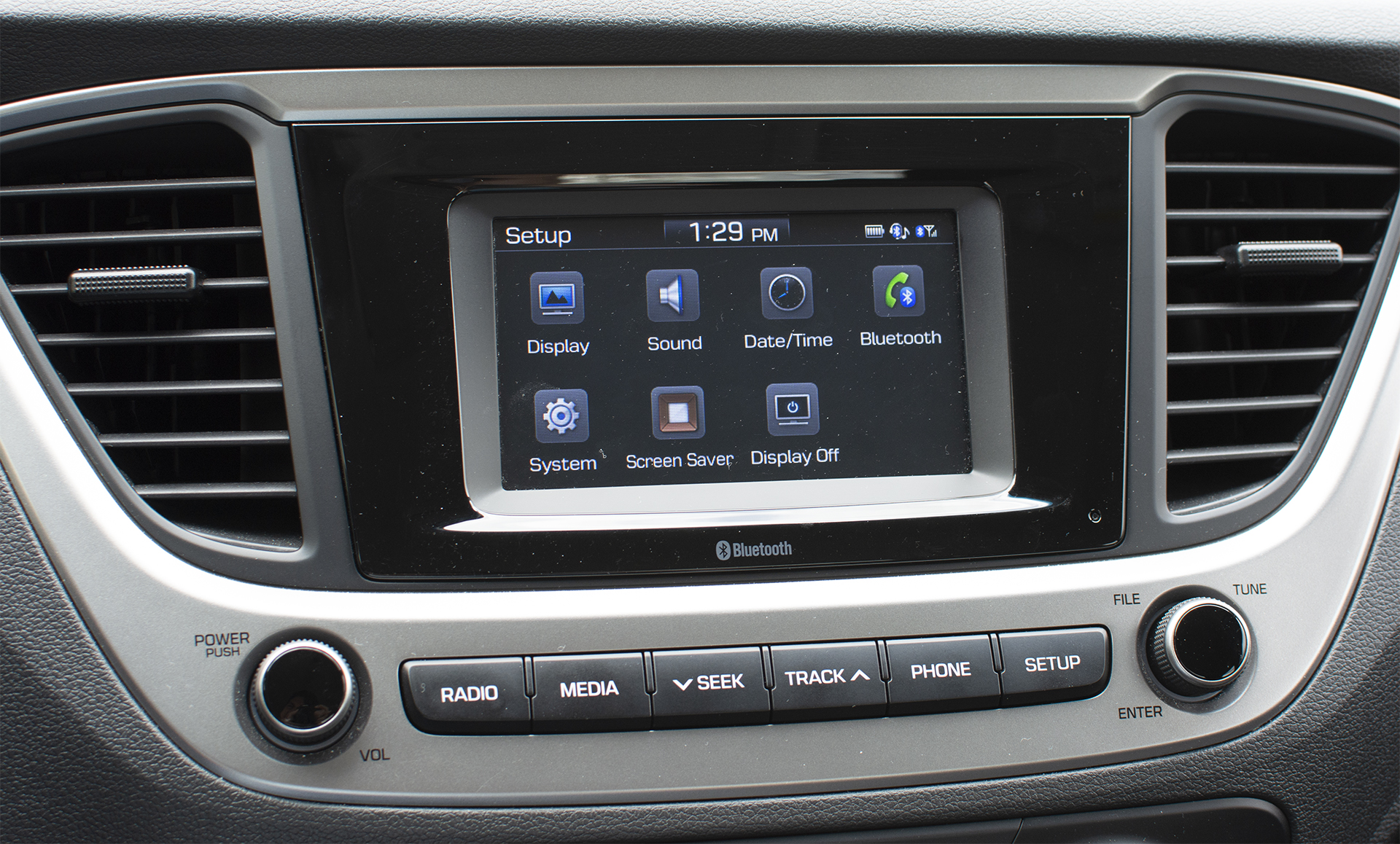 A 5-inch touchscreen infotainment system comes standard on the Accent SE, while a larger 7-inch system comes on the SEL and Limited. The larger screen gets Apple CarPlay and Android Auto compatibility as standard.

The SE's infotainment system is very bare bones, with AM/FM radio, Bluetooth, USB and 3.5-mm aux input. We found the system very easy to use with simple graphics and a row of buttons below the screen to switch between various functions. The only downside is the screen being somewhat hard to read at a glance due to the small size.

The 2018 Hyundai Accent SE with the six-speed manual is EPA rated at 28 City/37 Highway/31 Combined. Opt for the six-speed automatic, and the highway and combined numbers drop by just 1 mpg. These numbers put the Accent right in the middle of the subcompact class.

Our average for the week in the Accent SE landed around 33 mpg. 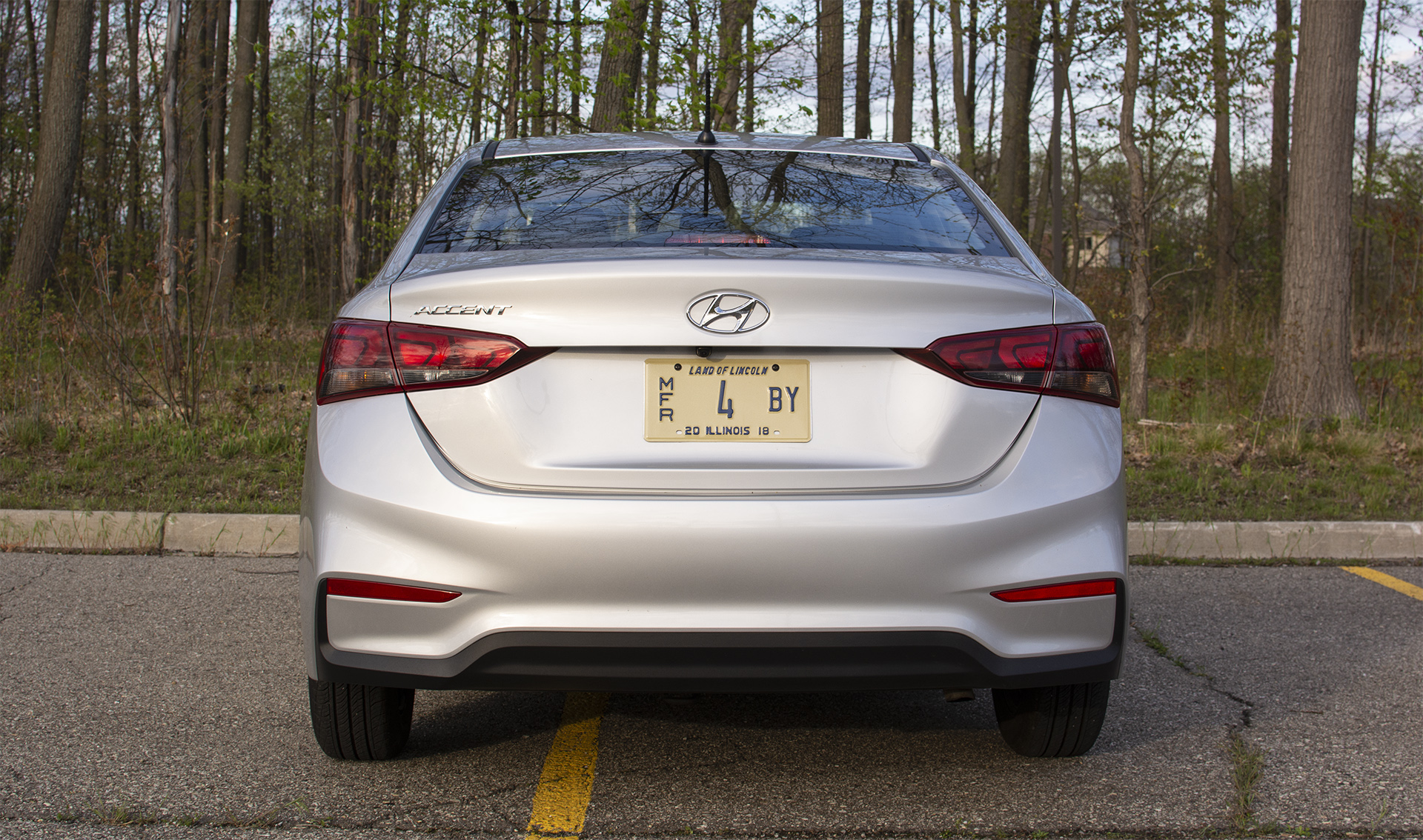 Both Consumer Reports and J.D. Power give the 2018 Accent an average rating for predicted reliability. J.D. Power doesn't have initial quality ratings for the Accent at the time of this writing, but Hyundai as a whole finished at the top of its most recent study.

The Insurance Institute for Highway Safety recently gave the 2018 Hyundai Accent its highest rating of Good in most tests. It fell short of the IIHS Top Safety Pick award because the headlight performance was deemed to be quite poor.

All Accents get a full set of airbags, traction and stability control, anti-lock brakes with brake assist, tire pressure monitoring and a backup camera. The Limited adds automatic emergency braking, a feature not available on most subcompacts. 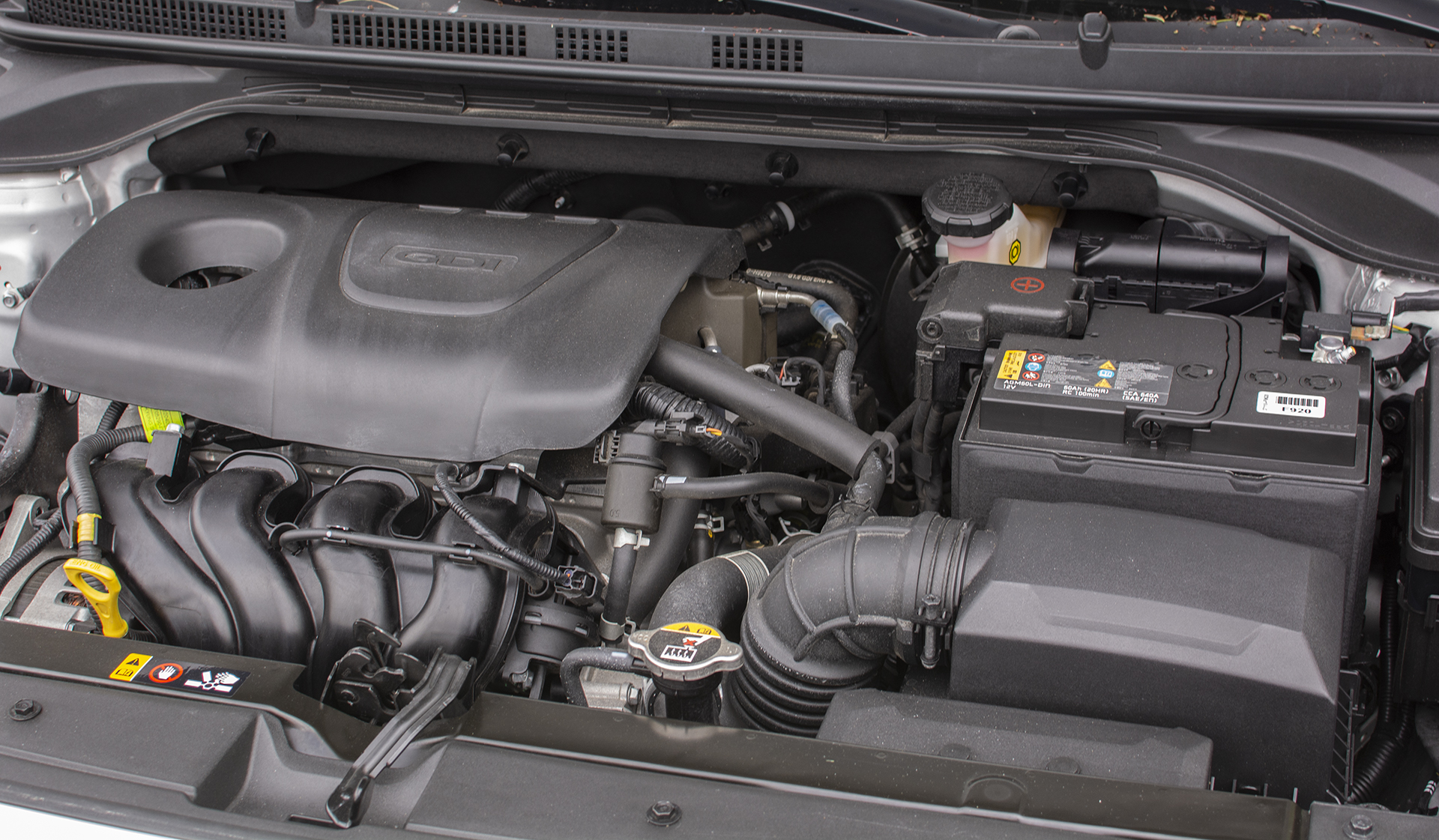 Under the Accent's hood is a 1.6L four-cylinder engine with 130 horsepower and 119 pound-feet of torque. Our SE tester came with the six-speed manual.

A six-speed automatic is standard on the SEL and Limited, and optional on the SE. When paired with the manual, the 1.6 feels quite zippy around town. We're assuming the manual allows the engine to flex what little power it has on offer. We briefly drove the automatic and found it to smother the available power from the engine. Our hunch is the programming for the automatic is tuned to improving fuel economy at the cost of performance. No matter which transmission was equipped, the 1.6 struggled to get up to highway speeds at a decent rate.

The manual transmission is a joy to work, as it offers the right amount feel or travel when moving the lever. We wish there was little bit more feedback from the clutch pedal because it was difficult to determine the take-off point when leaving a stop.

Ride quality is about average for subcompacts, with some bumps being transmitted inside. There is a fair amount of wind noise that comes inside when driving at higher speeds, mostly due to Accent not having enough sound deadening.

But where Accent surprised us is its handling. When cornering, the vehicle feels light on its feet and shows little body roll. Steering is a bit numb in terms of feel, but provides decent weight when turning. 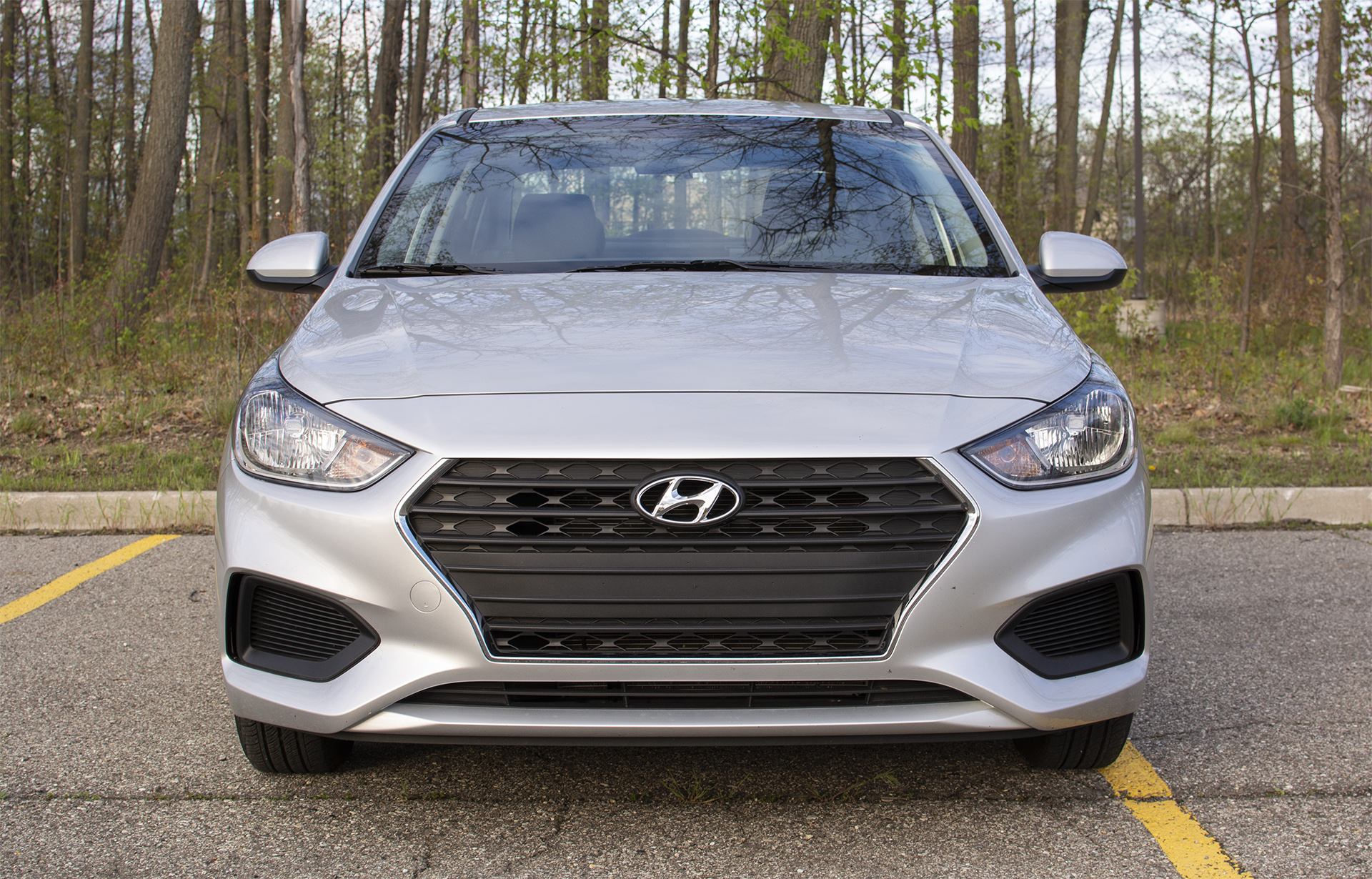 For most people, the SE is our pick because it comes with all of the necessary equipment you'll need, such as Bluetooth, full power accessories, backup camera and air conditioning. If you really want an automatic, save up an extra $2,300 to get into an SEL. That brings a number of additional features, such as a 7-inch infotainment system, alloy wheels and automatic headlights. 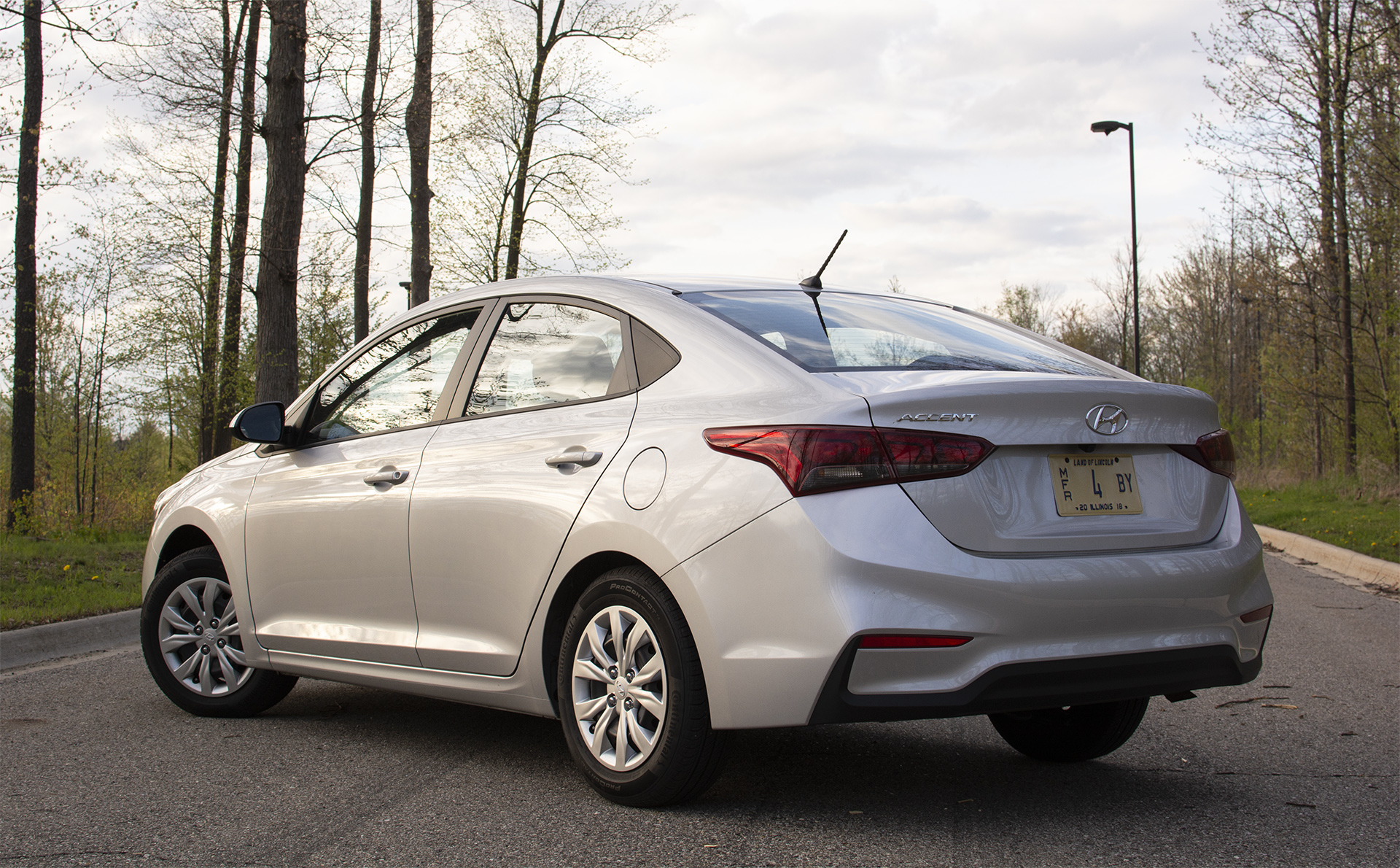 Buyers wanting to stretch their dollar as far as possible need to consider the Nissan Versa. It is currently the cheapest new car in the U.S., with a base price of $12,310. The Versa leads the pack with the largest back seat and trunk in the class. But you get what you paid for. In the base Versa S, you miss out on a number features such as power windows and locks, folding rear seats and cruise control. Performance is very lethargic, as the four-cylinder engine produces 109 horsepower. There is also an abundance of drivetrain noise if you opt for the CVT.

For not much more money, you can step into the Kia Rio. This is the sister model to the Accent, which means it has most of the same pluses and minuses. Kia still offers a hatchback which maximizes overall cargo space. One item to be aware of is that base Rio LX isn't as well equipped as the Accent SE. You'll miss out on Bluetooth, cruise control and power windows.

The 2018 Hyundai Accent may not be the most stylish or pack the most power in the class, but it gets the basics right. For not that much money, you get a sedan that comes loaded with a large number of standard features, drives very well and is thrifty on gas. A penalty box? Not so in the Accent.