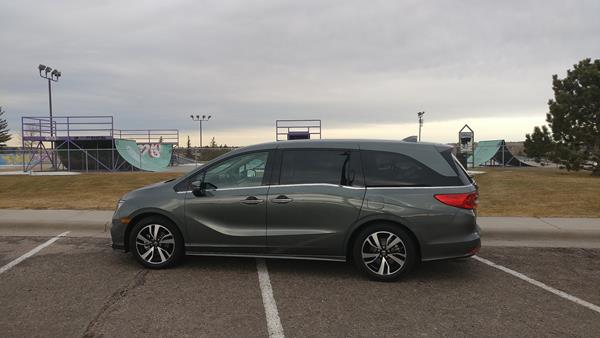 The Honda Odyssey was first introduced in 1995 and has since been plying American roads as one of the most popular minivans. The market has cooled and changed a lot since the Odyssey first came to being, but the minivan soldiers are a popular choice for families looking for plenty of comfort and interior real estate, and who have no hangups about potential social stigmas.

The 2018 Honda Odyssey brings in the fifth generation of Homer's namesake minivan, redesigned to add some performance, more second-row adjustability and some nifty in-cabin technology for keeping your eyes on the road while monitoring the little ones in the back seats.

The 2018 Odyssey minivan seats up to eight, has double-sliding doors and comes in six trim levels starting with the LX and moving up through the EX, EX-L, EX-L with Navi and RES, Touring and Elite. Trim level denotes package options and seating arrangements. 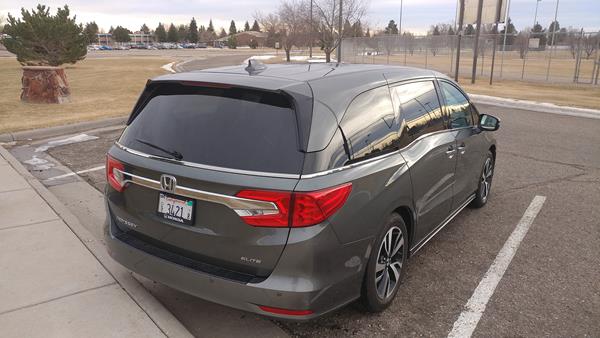 The Odyssey is a minivan and that implies a large amount of relativity to its looks. Given that a minivan will always appear to be a huge people-hauling box on four wheels, design elements can be a little limited in their capability to hide that core function. Honda elected to use the beltline and rear pillar to try to add some style to the Odyssey. It comes with good effect.

The short hood and long windshield of the 2018 Odyssey is right out of Honda's usual playbook with cars and crossovers, blunting the front end of the vehicle and shoving the eyes rearward to allow body lines and edges to make the look. With the Odyssey, an upward-tilting then fast-curving beltline defines the lower part of the greenhouse and sets the stage for the opposing curvature of the heavy body crease below, running across both doors.

Fenders are ignored in the Odyssey's design, acting largely as just starting points for the rest of the body's lines to emanate from. The roof of the minivan is coupe-like in its hint at a curve, accented by a slightly widening lower edge as the windows lightly pinch towards the rear. The rear pillar is a V to create forward motion and accent the edgy spoiler above it.

For the most part, the 2018 Honda Odyssey is a good-looking vehicle with more style than might be expected by those who still think of minivans as the utilitarian mark of domesticated suburbanites. 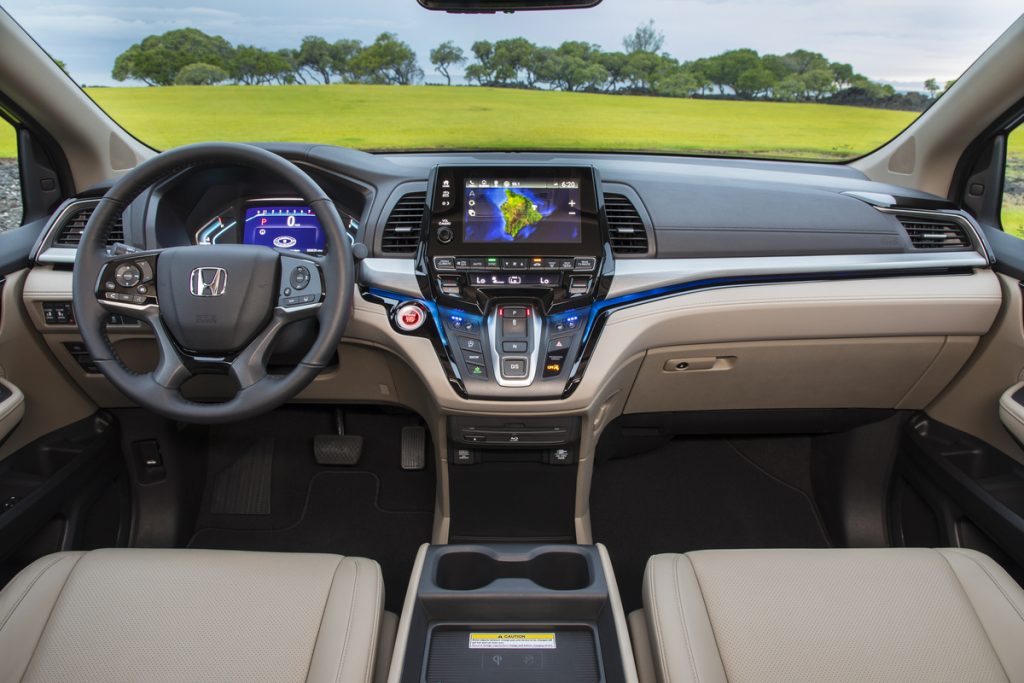 The interior of the 2018 Honda Odyssey is extremely well done. Which it should be, as the entire point of minivan is to have a comfortable, many-seated interior with tons of room. So we'd expect nothing less than a "10" for a minivan like the Odyssey.

The driving position and front passenger's comfort levels are excellent, and layouts for controls and storage are logical and well thought out. We like the vast adjustment ranges for the front seating and the smart way that the center console allows storage of items with easy versatility. In the second row, the seating is adjustable and easy to get to thanks to those sliding doors that make a minivan the most accessible vehicle on the market.

In the third row, seating is more comfortable than might be expected by people used to crossovers with their limited third-row accommodations. Getting to the third row is easy, even if the optional second-row bench is used in the Odyssey. This is thanks to the forward-sliding seat and tilting seats in a split-bench setup. With the captain's chairs in the second row, access to the third is even easier with the side-sliding function and space between the seats for access.

Cargo space in the 2018 Odyssey is very good and on par or better than other minivans in the segment. Like most, the third row up means a large tub is available in the rear. Optional covers and other items can be used to close that off so that items can be stacked on top, raising the usefulness (and available floor space) in the Odyssey's trunk. 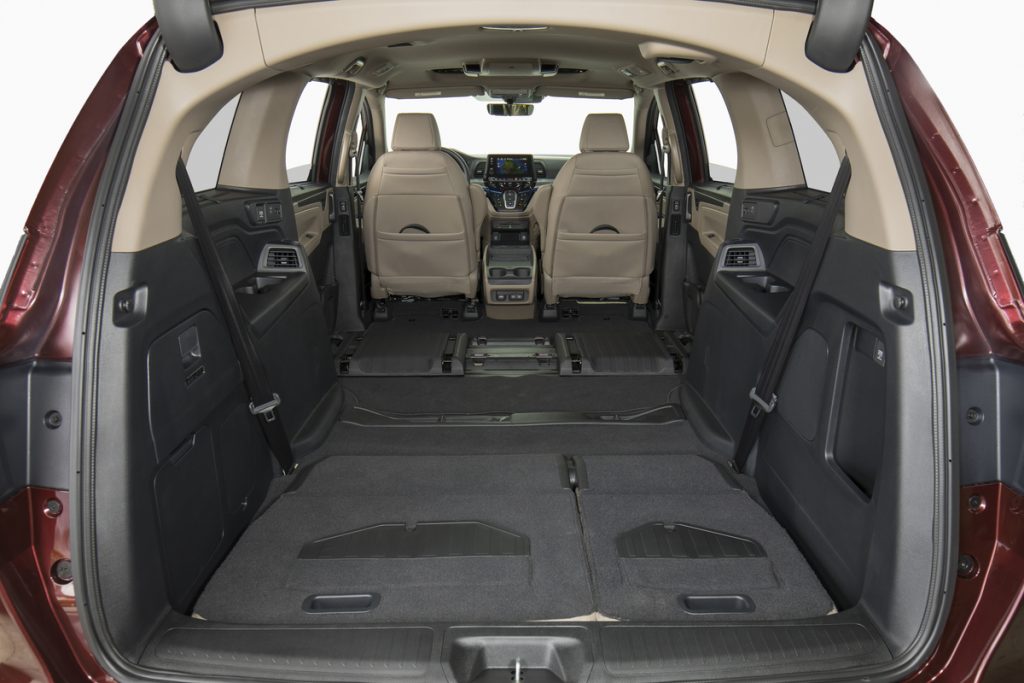 We should make a note on trim levels here. There are no stand-alone options for the Odyssey, so interior accouterments depend entirely on the trim level chosen. The LX is the only trim level that doesn't have a second-row bench. A rearview camera and automatic climate control are standard equipment, as are powered front seats.

The EX and EX-L models add power sliding rear doors, keyless ignition with remote start, heated front seats, a cabin-view mirror, and more adjustment and sliding options for the second row. The EX-L with Navigation and Rear Entertainment add just what its name implies. The Touring and Elite models for the Odyssey add driver aids like parking sensors and convenience items like an in-vehicle vacuum cleaner and hands-free liftgate. It also adds a nifty rear cabin monitoring system.

The Honda Odyssey's cabin monitor allows the driver or front passenger to press a button on the screen to activate a camera mounted just behind the front row, giving a fisheye view of the entire cabin behind. This displays on the infotainment screen up front and has the option to broadcast speaking throughout the cabin via the Bluetooth inputs up front. These work with plugged-in or wirelessly-connected headphones, so if rear passengers are listening to music or watching the entertainment system's screens, they can be spoken to through the mics.

Incidentally, this also means that the obvious parent joke of saying, "This is your captain speaking..." becomes almost a requirement. That never gets old. At least, not for us parents. 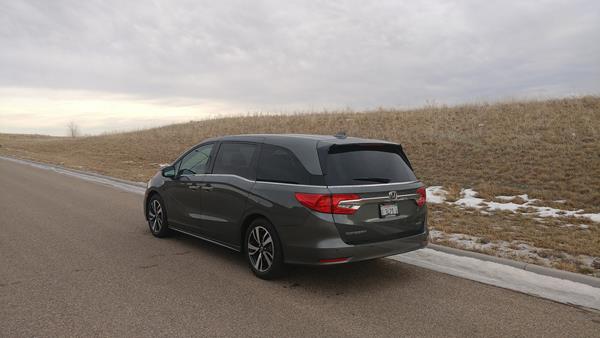 The base model 2018 Odyssey has a 5-inch touchscreen infotainment interface with basic functionality and connectivity. This screen can connect to devices via Bluetooth, includes a USB port up front and two more in back, and has a few extra functions like control of climate and radio inputs including satellite and HD.

The upgrade for infotainment, which appears in every model of the Odyssey above the base LX, uses a larger 8-inch touchscreen display with Honda's new user interface. This has better graphics than what's found in the older version and has faster responses as well. The menu is more intuitive with most-used items staying as "hot options" across the top or bottom of the screen nearly all of the time.

Fans of Apple CarPlay and Android Auto will like the new system's integration of these and its more integral use of them. Popups and requests for permissions are far fewer than with older versions of these apps. We noted that Android Auto, in particular, was far less glitchy in this new Odyssey than it is in other Honda models using the older version of the infotainment interface. Or when compared to other manufacturers.

Fuel economy in a minivan is generally better than it will be in a like-sized crossover and that holds true with the 2018 Honda Odyssey. The Odyssey is EPA-rated at 22 mpg combined, with 19 mpg in the city and 28 mpg on the highway.

In the real world, we found that the Odyssey usually lives up to those expectations within a point or two. Under varied passenger loads and differing driving conditions, we managed to average 20.5 mpg over a week's worth of driving (roughly 250 miles).

There isn't much to go off of yet for reliability ratings with this new-generation Honda Odyssey. As of this writing, the 2018 Odyssey has not yet been rated by J.D. Power and Associates in their annual Vehicle Dependability Study. One recall has been issued for safety belts in the 2018 Honda Odyssey, but it has not had any serious mechanical issues.

The warranty for the Honda Odyssey stands at three years or 36,000 miles, which is about average for the segment. 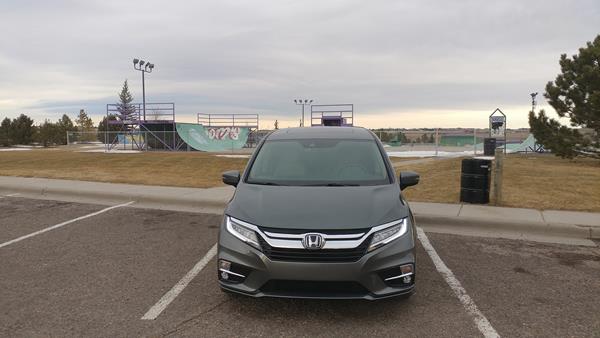 One expectations minivan buyers have is high safety ratings for their family vehicle. The 2018 Honda Odyssey delivers on that front, achieving an overall 5-Star safety rating from the National Highway Traffic Safety Administration with five stars each for frontal and side crash tests and four stars for rollover tests.

The Insurance Institute for Highway Safety has also given the 2018 Odyssey top marks for crash test safety, with top scores of "Good" on all crash tests performed.

The Odyssey is surprisingly spry for its size. Powered by a well-tuned 3.5-liter V6 that outputs 280 horsepower through a nine-speed automatic transmission, the front-wheel drive 2018 Odyssey does well in everyday driving situations. An optional 10-speed automatic is available. While it doesn't change fuel economy, it does improve some shifting patterns at lower speeds in what's already a smooth ride.

The 2018 Honda Odyssey drives well, though somewhat limited driver visibility to the sides can be a concern. Getting around town or out onto the freeway is no hassle for the Odyssey, which speeds up when asked and maneuvers nicely when needed. We liked the feel of the Honda's acceleration and movement on the road.

On the highway, the 2018 Odyssey is surprisingly quiet, especially in the upper packages with their ballistic windscreens for added sound dampening. The Odyssey's suspension does a good job of absorbing the road without making the vehicle feel dead to the touch.

Pricing in the minivan segment is generally the same across the board. Some options may be a bit cheaper than the Odyssey and the à la carte accessories available for some competitors may be a good draw. Yet the 2018 Odyssey pits well against the competition in terms of what you get for the money spent.

The base model Odyssey is a bit more expensive than other base model, but it likely comes with more accouterments than will be found elsewhere. The top-most Honda Odyssey is equally spendy compared to most others, but offers a lot in return.

For most buyers, we think the middle-tier EX or EX-L class is the best option, with a good mix of amenities and a solid price point. The Odyssey sits near the top of its sales class for a reason and we believe that few buyers will lament their choice.

Long predicted to be slowly dying off, the minivan segment has made a sort of comeback in recent years as companies have revamped their offerings and proven that minivans still have some appeal to a large number of buyers. Finding solid rivals to the 2018 Honda Odyssey is not, therefore, a difficult task.

Chief among the competition is the Chrysler Pacifica, which debuted a few years ago and set new standards for the minivan segment. Replacing the Dodge Caravan and Chrysler Town & Country, the Pacifica showed that minivans don't have to be completely boring. The Odyssey is a good contender now, though its exterior looks may not match up.

The Kia Sedona is the low price leader in the minivan market and also does well against the Odyssey's lower trims. At the middle tier and above, though, the Honda outpaces the Kia easily. Meanwhile, the Toyota Sienna ranks among the most expensive minivans on the market, but is generally the most luxurious offerings as well.

For the money spent, it's hard to argue with the all-new 2018 Honda Odyssey's value and excellence found. We like its chops, with a solid offering for every budget, and a good amount of pep and interior comfort. It's worth shopping around for minivans today, but if your final choice is the 2018 Odyssey, there won't be any regrets.