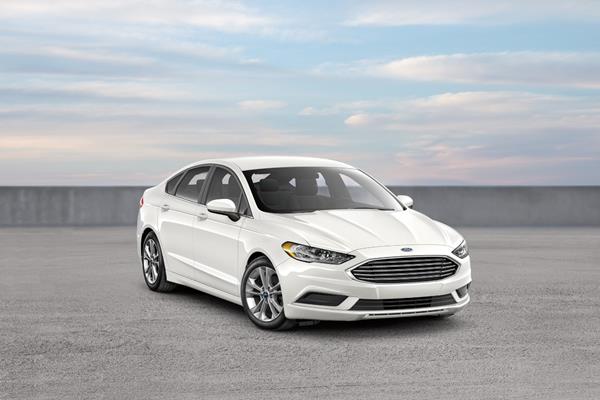 The Ford Fusion remains one of the most stylish sedans in the midsize category, despite not being one of the more recent designs offered. Most of the Fusion's competition has been busy rolling out new generations of their design and build. The good news for Ford is that they're mostly playing catch-up to the excellent Fusion, which remains one of the best in its competitive midsize sedan class.

The current generation of the Ford Fusion was introduced in 2013 with smart styling reminiscent of Aston Martin, a company that Ford briefly owned before. The 2018 Ford Fusion largely carries over with the significant refresh made for 2017. Those changes included a new interior design with better ergonomics and improved infotainment. What remains are the eye-catching looks of the Fusion in this generation, as well as its roomy and comfortable interior.

A host of engine choices and several trim levels and package options make the Fusion one of the most configurable cars in its segment. The 2018 Fusion continues to show that smart looks and practicality can be had in one package in the midsize sedan segment. 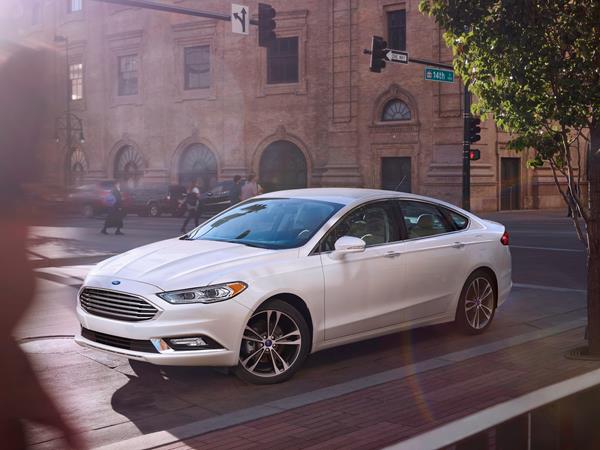 The Fusion saw a few exterior changes last year, mostly to tighten up its design language with narrower headlamps and a reduction of the "lip" created by the grille overhang. The 2018 Fusion is otherwise the same as it has been for this generation of the car. Its classy, smooth design competes well against newcomers in the market, despite its age - now pushing five years.

An oblong grille sits above a grinning lower intake that is edged by fog lamps. Headlamps rise away from the grille to either side, emphasizing the grille's diamond shape. Lines along the hood speed towards the windscreen to create a definitive bump for the engine without being overtly muscular. This hint at muscle without being overbearing also defines the front fenders, which flare without thrusting. The bodywork takes its time narrowing back down to retain the sleek overall look the Fusion's designers aimed for.

The raked windscreen starts the angle for the rolling roofline that ends in a fastback and clipped deck. Another slight bulge for the rear fenders mimics the front, but with more powerful lines for a little more speed and muscle. Body lines run along either side to emphasize forward movement and keep the slippery-looking car flowing ever forward.

This timeless look remains popular and Ford is not likely to abandon it soon. The 2018 Ford Fusion is one of the classiest cars in this segment. 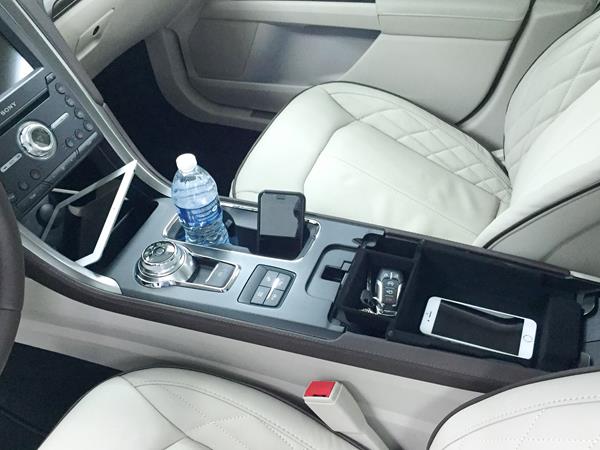 The 2018 Ford Fusion carries on with the significant interior refresh from the last model year. That redesign saw an almost entirely new dashboard, the introduction of a rotary shift knob over a stick, and big changes to infotainment and small item storage. Materials quality remains high, but added design elements make the Fusion appear even more upscale than it was before 2017.

The move to a rotary shifter meant a lot of real estate was freed up with the center console, making for a complete redesign of its appearance to add more storage and more accessible cupholders. A space between the driver and front passenger's feet gives a smart space for a purse, briefcase or other large carry item, while keeping it accessible. Previously this kind of space was reserved for minivans and crossovers, giving the Fusion a real advantage.

Another upgrade to the Fusion's interior is the number of technology elements. Plugs for every gadget are found throughout the cabin, with USB ports ranging from two (standard) to six, depending on packaging.

The front driver and passenger seating is excellent, with good bolstering similar to that found in the well-done new-generation Mustang. This makes the 2018 Ford Fusion one of the more comfortable sedans in its standard packaging. Upgrades only add to this comfort level.

The rear seats are also well done, with nicely designed outboard seats on the bench for good passenger comfort. The center position is still cramped and largely unusable by most people without a lot of shifting and shoulder bumping. Kids in safety seats are difficult to spread three across as well. We like the wide-swinging doors on the Fusion, which make entry and egress easy.

Back in the trunk, the 2018 Fusion has a full 16 cubic feet of space available from a wide opening. The rear seats are split-fold as standard and add to that space when required. 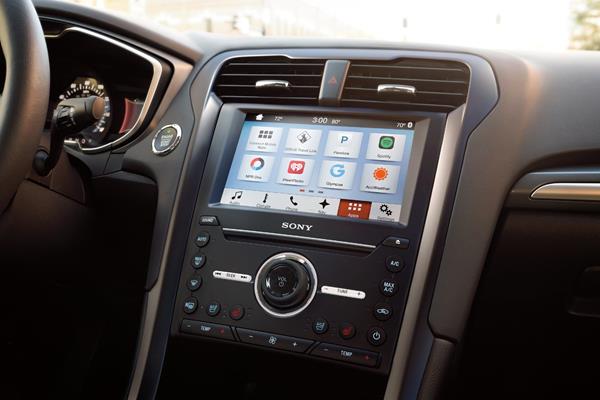 The 2018 Ford Fusion now has Ford's new Sync 3 infotainment interface available. This dramatically improves the infotainment experience within the Fusion as an upgrade from the previous-generation MyFord Touch system.

At the base level, the Fusion includes simple connectivity (Bluetooth) for phones and devices, as well as hands-free calling. The rest of the system focuses on radio tuning and climate controls.

The upgrade option moves to Sync 3 and can be had in any trim level for the 2018 Fusion through the Technology package. Upper trims have Sync 3 as standard. Sync 3 is marked by large virtual buttons, excellent visual clarity and fast responses to inputs. Smartphone connectivity is excellent as well. WiFi for connections to trusted networks so the Fusion can update over the air is also a Sync 3 feature. Navigation is optional on all Sync 3 systems.

The 2018 Ford Fusion has several fuel economy estimates, depending on its configuration. The base level engine is a 2.5-liter four-cylinder that offers 25 mpg combined, with 21 mpg in the city and 32 mpg on the highway. The next-level upgrade is a 1.5-liter four-cylinder that offers a much more economic 27 mpg combined rating, with 23 mpg city and 34 mpg highway. Our test of this engine in a higher trim point model resulted in similar numbers at 26 mpg average overall after a week of driving.

The next upgrade is a 2.0-liter four-cylinder that offers a sportier drive with fuel economy to match at 25 mpg combined (21 city, 31 highway). All-wheel drive is available with this engine option, which drops mpg estimates to 23 mpg combined. The 2.0L is offered as a turbocharged option as an alternative to a more traditional V6.

There is a V6 for the 2018 Fusion, with a rather apathetic 20 mpg combined EPA rating.

A safety recall last year caused some concern with the Fusion, but so far it's had no recalls for the 2018 model year (as of this publication). Reliability numbers from organizations like J.D. Power and Associates are not yet available for the 2018 Fusion, but as it's largely unchanged from 2017, we suspect last year's good scores will remain. For 2017, J.D. Power gave the Fusion a "Better Than Average" rating on its Vehicle Dependability Study results.

The 2018 Fusion has far better than average safety ratings from crash test results. The National Highway Traffic Safety Administration has given the 2018 Ford Fusion a five-star overall rating, with five stars for side crash tests and four stars each for frontal and rollover tests. This mirrors 2017's results from the NHTSA for the Fusion.

The Insurance Institute for Highway Safety (IIHS) gave the 2018 Fusion a Top Safety Pick rating for scoring a best-possible "Good" score on all crash tests. The IIHS has not yet released results for the 2018 Fusion regarding advanced safety technology, but the identical 2017 model received a Top Safety Pick Plus rating for its included and available advanced crash mitigation tech.

The 2018 Ford Fusion has four engine options, each mated to an automatic transmission. Some of these engine options include all-wheel drive as a drivetrain option. Every engine is either standard or an upgrade option for the Fusion, depending on trim level.

The base model S and SE trims include a 2.5-liter four-cylinder engine and a six-speed automatic transmission in front-wheel drive. The engine outputs 175 horsepower and 175 pound-feet of torque. Drive dynamics with this powertrain are about average for the segment. 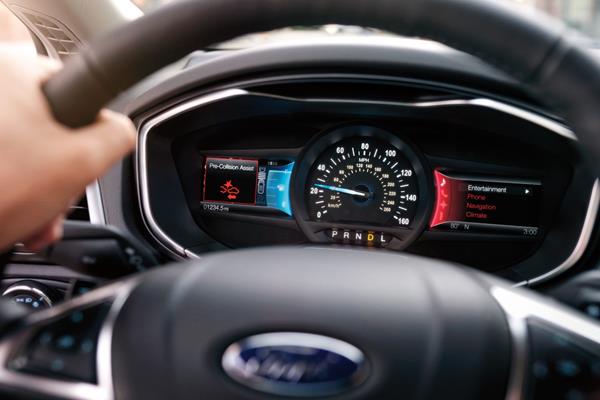 The SE trim can be upgraded to a 1.5-liter turbocharged four-cylinder engine with the same six-speed automatic transmission in front-wheel drive. This package adds paddle shifting as standard and has a sportier output at 181 hp and 185 lb-ft of torque. Engine stop-start for improved city mpg and faster transmission engagement programming gives this powertrain a much sportier appeal.

Another engine option for the SE that's also available in other upper trims is the 2.0-liter turbocharged four-cylinder that performs similarly to a naturally aspirated V6, at 240 horses and 270 lb-ft of torque. This front-wheel drive configuration uses the same six-speed automatic tuned to the higher output and has optional all-wheel drive. This sporty drivetrain offers 6.5-second 0-60 mph times in FWD (just shy of 7 seconds for AWD). The Fusion's naturally-sporty suspension complements this powertrain's excellence for a truly fun dynamic. This engine is standard on the Titanium and Platinum trim levels.

The 2018 Ford Fusion V6 Sport model includes a 2.7-liter V6 that outputs 325 hp and 380 lb-ft through another six-speed automatic transmission with AWD as standard. Suspension tuning and other changes to the car's chassis make the V6 Sport the most muscular of the Fusion bunch with 0-60 mph times of under 6 seconds for most drivers. We spent time in this model last year and thoroughly enjoyed its very well-done powertrain.

Hybrid and plug-in hybrid models are also available for the Fusion and are reviewed separately.

In comparison to other midsize sedans, the 2018 Ford Fusion is only about average at the surface level. Base and package pricing is commensurate with segment averages and resale is about par as well.

Where the Fusion shines is in its upper-level appearance and premium-level interior appeal in many trim levels. The midsize segment is fast moving, but now has competition from smaller crossovers that are eating into its sales, so finding a dealer willing to haggle is not difficult in today's market. This raises the Fusion's value proposition.

As one of the best-looking sedans in the midsize segment and with its roomy, upscale interior, the Fusion definitely holds its own in value.

The 2018 Ford Fusion is a well-rounded, nicely done sedan with a beautiful exterior and comfortable, roomy interior. Others in the segment have been busy updating to catch up and might be worth cross-shopping.

The Honda Accord is now much more competitive and vies with the equally well-done Toyota Camry for best-seller status. The Fusion offers more options and a better exterior look, and neither the Accord nor the Camry have a V6 that performs like the V6 Sport. The Chevrolet Malibu provides competition there, along with a very well-done infotainment system to match. The competitor for look and appeal is the Mazda MAZDA6 sedan, with its equally classy exterior and fast-paced turbocharged engine.

These competitors don't have the 2018 Ford Fusion's all-around excellence. They are competitive when compared through individual packages, but not on the whole. The beautiful design and excellent interior of the Fusion, no matter its trim point, gives it a clear edge despite being one of the older designs currently on the market.