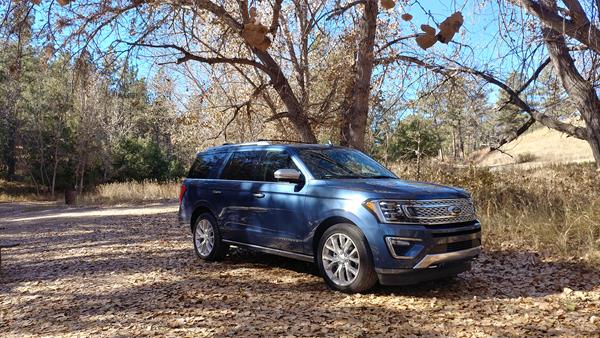 The Ford Expedition is the largest of Ford's sport utility models and is often the top choice for families who need a lot of seating space and plenty of truck-like capability. Completely revamped for the 2018 model year, the new-generation Expedition is much more family-friendly, gives a smoother ride, and is extremely fuel efficient compared to others in its class.

The 2018 Ford Expedition raises the bar for traditional body-on-frame SUVs, proving that all of the capabilities the truck-based sport utilities are loved for can remain intact while providing many of the advantages a unibody crossover-SUV offers. As-is, the Expedition is currently our best-in-class on several metrics.

The new-generational update for the Expedition in 2018 add some crossover-like interior elements and comfort ergonomics, improved ride quality, more car-like handling characteristics, and a more synergistic engine and transmission. Our week-long test of the Expedition this year included a family road trip and daily driving duties, both of which the big SUV handled very well.

The 2018 Expedition is a traditional truck-based SUV with seating for up to eight passengers. Available in three trim levels with several options packages for each, the Expedition is also available in a Max configuration for its XLT and Limited trims, extending the wheelbase and adding more cargo space as a result. There is one engine and transmission combination available for the Expedition, but the engine upgrades by 50 horsepower in the Platinum trim level.


What We Love About the 2018 Ford Expedition:


What We Don't Love About the 2018 Ford Expedition: 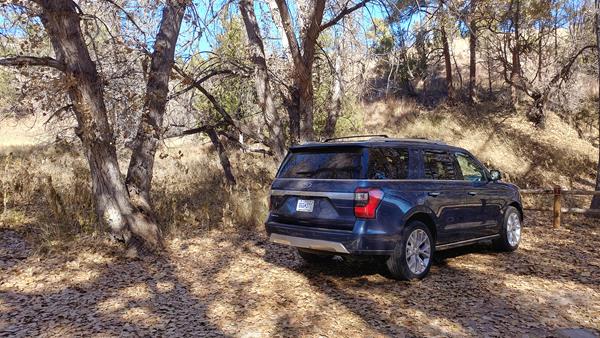 The 2018 Ford Expedition is a contemporary vehicle with crossover-like styling that melds well with its truck-based architecture. Instead of being merely the SUV version of the Ford F-Series pickups, the Expedition has a good-looking, modern style. Hints of Ford truck influence, such as the Expedition's hood and front fenders, are present, but the body styling and simplicity of the SUV is a more modern touch than most rivals in the full-sized SUV market can boast.

The 2018 Expedition has a flat, square horizontally-designed grille with the signature Ford inner rectangle around the oval marque. The lower portion of the fascia includes an intake and approach edge rather than a large bumper note, helping to soften the truckish appearance for a more contemporary style.

The otherwise square-bodied design of the Expedition is given straight edges in body lines and rounded corners to bolster rather than hide the rectangular looks. This gives the Expedition more bulk than it has and promises lots of interior space and strong capability.

It's a surprisingly good mixture of styling that notes the truck-based roots of the Expedition without just being a truck itself. The 2018 Expedition is unabashedly an SUV. 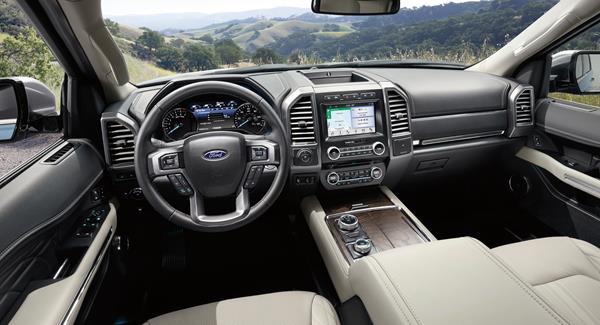 Those buying an SUV are aware of the trade-offs made for the extra capability when it comes to interior ergonomics as compared to a car-based crossover. Amazingly, the 2018 Ford Expedition manages to minimize the losses a body-on-frame SUV has when compared to a crossover without losing the truck-based utility. Roominess in the Expedition is vast and uncompromised, with all three rows being fully capable of comfortably hauling adults in them.

The boxy body design of the Expedition pays off in interior room for sure, with the big Ford SUV being the largest and most cargo- and passenger-friendly utility we've driven to date. Seating in the 2018 Expedition accommodates up to eight, though we'd recommend seven as a better option. Adding the Max package for the extended rear cargo adds lots of usefulness behind the third row, making the Expedition even more versatile.

For the driver, there is a high, commanding view of the road (a truck trait) and a lot of adjustment options for both seating and steering (a crossover trait). Controls are easy to find and use. That includes the daunting number of buttons and switches found on the center console, which at first glance seems overly complex. It doesn't take long to realize that most are redundant hard buttons for what's in the infotainment and these extra buttons actually make life easier on the road.

The front passenger also has a lot of room and plenty of adjustment, no matter the trim. The center bin between the front seats is cavernous, legroom is enormous, and finding enough plugs and places for gadgets is easy.

In the second row, the good roominess is, of course, at the outboard positions. Opting for the captain's chairs can add more comfort and easier access to the third row behind, but deletes a seat. The third row is adult-friendly for two and kid-friendly for three, with lots of legroom and a surprisingly high seating position for a good knee bend. The rows both split-fold by default to create versatility in passenger and cargo options.

Getting in and out of the big Expedition is relatively easy thanks to low door sills, a realistic body height, and the abundance of legroom for maneuvering into your place. The rear cargo hatch opens wide for easy access to load cargo and the glass portion opens separately to allow easier packing of groceries or for overstuffing once the bulky items are in.

Cargo space is measured at 20.9 cubic feet behind the third row and a massive 36 cubic feet with the Max version. That extends to 63.6 cubic feet in the standard Expedition with the third row folded and 104.6 cubes with the second row down. The Max goes to 79.6 and 121.4 respectively. Conveniently, both rows of seating fold flat and all seats can be folded from the rear too. 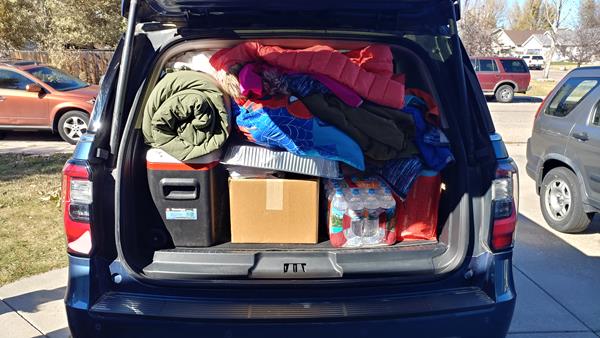 The base infotainment in the 2018 Ford Expedition starts with a 4.2-inch display with the Sync voice control system. There are four USB ports, two up front and two in the rear (second row). Basic functions like Bluetooth connectivity, satellite radio, and a USB interface (located up front) are standard. An upgrade to the Sync 3 tech interface is available in the base package Expedition and becomes standard in the Limited and Platinum packages.

Sync 3 upgrades the screen to an 8-inch touchscreen interface with more crisp graphics and more functionality. It includes Sync Connect (wireless phone charging and a WiFi hotspot) as well as Android Auto and Apple CarPlay. Navigation an upgrade option in every trim point. A self-parking system is available in the Platinum edition.

Ford's Sync 3 system is fast and responsive, offering a lot of useful functionality in a relatively easy-to-learn system. It's one of the better infotainment options on the market today.

In the world of traditional sport utilities, fuel economy is usually the low point for the vehicle's statistics. Not so with the 2018 Ford Expedition, which is EPA-rated at 17 mpg in the city and 24 mpg on the highway. Standard or Max version. In the real world, drivers can expect that an effective highway mix will actually result in higher returns, with our average after a week in the Expedition (including over 200 miles of road tripping to go camping, plus more than 100 miles of mostly in-town driving) was 23 mpg overall.

Despite having a lot of recalls for its inaugural year, the 2018 Ford Expedition is ranked very well for dependability. The recalls were all issued early in the production process for the vehicle. The J.D. Power and Associates Vehicle Dependability Study, which utilizes customer surveys about their new vehicle purchases, ranks the 2018 Expedition with a top score of "Among the Best" for expected reliability. Consumer Reports likewise ranks the new Expedition very well. 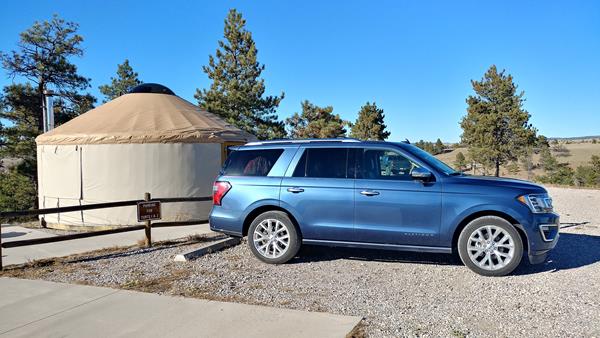 The National Highway Traffic Safety Administration (NHTSA) has given the 2018 Expedition a top score of 5-Stars Overall for its crash test results. The Expedition received 5 stars for both front collision tests, 5 stars each for all side crash tests, and four stars for the rollover test. The Expedition thus ranks as one of the best in its class for safety, according to the NHTSA.

As of this writing, the Insurance Institute for Highway Safety (IIHS) has not yet published any crash test reports for the 2018 Ford Expedition.

The 2018 Expedition is nicely outfitted for utility and economy with its 3.5-liter turbocharged V6 engine and ten-speed automatic transmission. This same engine powers the Ford F-150 pickup and with the same result: good fuel economy and lots of capability.

The Expedition has a power rating of 375 horsepower from its engine and delivers it earlier in the RPM band thanks to the turbos. The transmission rarely hunts for gears, finding the right spot most of the time. When shifting, it's smooth and confident about it.

When properly equipped, the Expedition is rated at up to 9,300 pounds of towing and comes with trailer sway control. Trailer backup assist and an integrated trailer brake controller are options.

The 2018 Ford Expedition drives smaller than it is, being more of a crossover in feel than SUV. That's surprising, given its bulk, with the only giveaway being the large pillars (front and especially rear) that block visibility.

Drive quality in the big Expedition is good and it's one of the smoothest SUVs on the road, absorbing bumps and changes well and staying comfortable throughout the drive. The get-up from the turbocharged six is good and keeps the Expedition feeling ready and confident.

The Ford Expedition is an expensive sport utility compared to some in its class. The media price for the 2018 Expedition is well over $60,000, but the model generally has a good resale value with strong value retention for an SUV. With a good dependability expectation and high ratings, that will only remain so for the new model.

We recommend most buyers look at the XLT with upgrades (especially the 202A package) for best value if high-end infotainment is not a need. We otherwise would point towards the well-packaged Limited as an option when adding more tech is a must. 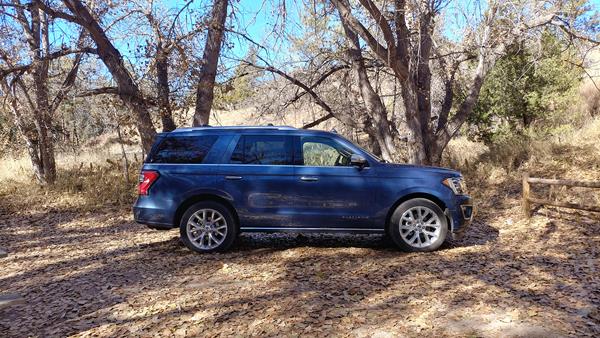 Rivals for the full-sized 2018 Ford Expedition SUV are few, given that the true sport utility market has begun to wane. The most popular option compared to the Expedition would be the Chevrolet Suburban and its GMC Yukon cousin. These both have more yesteryear styling elements and lower fuel economy by comparison along with less interior room. The Toyota Sequoia is another popular option, with good reliability ratings and a competitive price point, but far more truck-like looks and less cargo space. The Nissan Armada has excellent looks, but, again, less cargo space. The Armada does offer the best price point in the segment for base and mid-level pricing options.

When it's all said and done, the 2018 Ford Expedition offers a lot of excellence as an SUV. It has many of the strong points of a crossover, including improved passenger ergonomics, better cargo space, and a more car-like road presence. It's fuel efficient as well. Like a true SUV, however, the truck-based Expedition can tow a lot of weight, haul seven adults in comfort, and offers one of the quickest get-go's in the league. The Expedition blurs the line between crossover and true SUV and does so with all the high points of each intact.