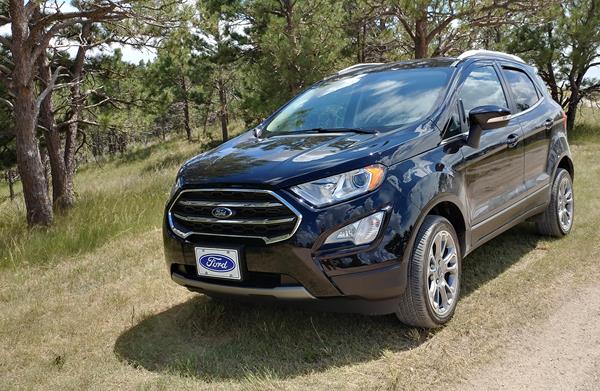 The EcoSport is new to Ford's lineup, at least in North America. The new subcompact crossover comes directly from Europe where it's been selling for some time. The 2019 Ford EcoSport is a small utility vehicle that fits in the line below the Ford Escape and which, for all intents and purposes, replaces the Ford Focus in the U.S.

There are plenty of new competitors in the subcompact crossover segment, which is becoming the fastest-growing segment in North America. The EcoSport sets itself apart with its larger-than-most cargo area, infotainment technology, and solid fuel economy returns. The all-new 2019 EcoSport is definitely a competitive option for today's market. 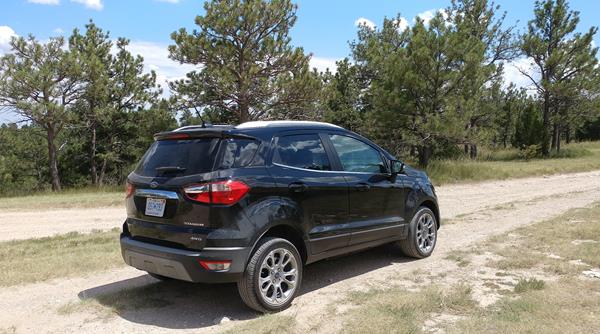 The EcoSport has a definite look about it that's similar to others in the Ford crossover lineup. Most compact and subcompact sport utilities like the EcoSport are generally shaped the same, with a snubbed hoodline, fat body, and squared-off rear. The EcoSport follows this design by necessity, of course, but adds a few flavors of its own.

The front hood of the 2019 EcoSport is short, but shaped well with a crescent moon wedge about its design when seen from above. The front clip is flat-nosed, but separated by a sort of humanoid bumper and light bezel spread that surrounds and separates the grille and lower intake. Wedged, but not overly thin headlamps and offset lower fog lamps finish the points.

The bodywork on the EcoSport is simple, but well-done with a speed line running from the top of the front fender's wheel well surround to the rear tail lamps. The lower portion of the EcoSport, at both front and sides, is clad with lower body protection elements that make it appear more rugged. The roofline of the EcoSport is fast-paced and slants decidedly rearward with a forward-cabin hump.

Everything about the 2019 Ford EcoSport's design speaks towards nimble maneuverability and capability. It's a good look for a subcompact crossover, blending urban driving with a sort of all-weather, all-terrain potential.

That being said, the 2018 Ford EcoSport doesn't feel cheap, just inexpensive. That distinction makes it less disappointing than it would be otherwise. Most of the difference in the EcoSport being in the use of texture to mask or downplay the hard plastics being used.

Materials quality in the EcoSport is good and seating is well done. The driver and front passenger are treated to plentiful amounts of headroom, legroom, and shoulder room with plush seats that stay comfortable for the drive, no matter the distance. We like the cloth upholstery for its durable feel and the leather for its excellent quality.

In the back seats, things are bit more cramped with more limited headroom and enough room for two, but a tight squeeze for three. This is the norm in the subcompact classes, so it's not a knock against the EcoSport that its three-seat rear is more a two-seater with room to spare. The outboard seating is comfortable, though legroom is limited and those over six feet will note some cramping at the roof.

Cargo space in the 2019 Ford EcoSport is above par for the class at 20.9 cubic feet behind the rear seats and 50 cubes when those seats are folded. The EcoSport's weird side-hinged door does open away from the curb (hinged on the left), but can be awkward when quarters are tight. 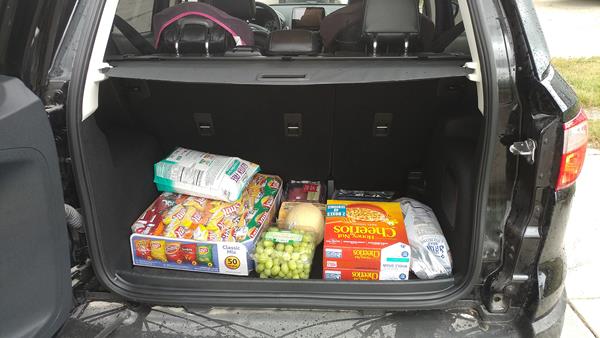 The 2019 EcoSport's highest point is definitely in technology. The crossover comes with a simple 4.2-inch or 6.5-inch screen with basic functionality at the base level, but upgrades to an 8-inch touchscreen with far more advanced options. The upgrade doesn't take much, though, in terms of trim jumping and it offers Ford's latest SYNC 3 interface.

SYNC 3 comes standard with Apple CarPlay, Android Auto, multiple USB ports, and navigation as an option. Apps and smartphone integration are well done and fairly simple to use, though the learning curve for more advanced features can take time.

Overall, though, the Ford EcoSport comes at least as well-equipped as most competitors and the ease of use the SYNC system has is a big bonus.

In the real world, a 2.0-liter AWD-equipped EcoSport saw almost the EPA's estimates in fuel economy at an average of 25 mpg overall after a week of daily driving.

The 2018 Ford EcoSport has been rated as "About Average" by the J.D. Power and Associates Vehicle Dependability Study. We do give the EcoSport some credit for having only one recall in its debut year, that being for labeling rather than anything mechanical. 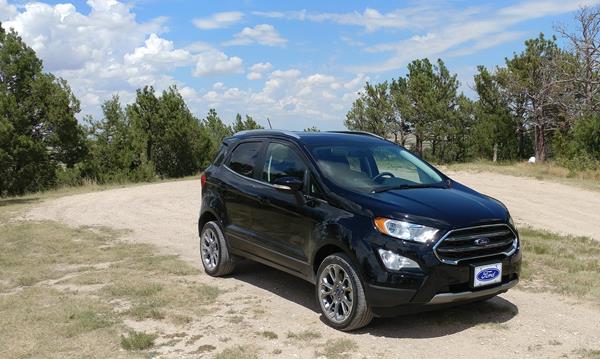 The Insurance Institute for Highway Safety (IIHS) has only released results for head restraint tests (top score of "Good") for the EcoSport. It has otherwise not published results for other crash tests with the 2018 EcoSport.

Compared to rivals, the Ford EcoSport is about average in the number of standard and available advanced safety and driver's assistance options it has.

Despite its name and physiology, the 2019 Ford EcoSport is not terribly sporty. The base engine is a turbocharged 1.0-liter three-cylinder that outputs 123 horsepower (eventually) to a six-speed automatic transmission. Tuned primarily towards fuel economy, this engine has a long bit of turbo lag before kicking in with any kind of excitement and then seems too little too late when it does. This engine mates to the front-wheel drive option for the EcoSport.

The all-wheel drive upgrade for the EcoSport brings a 2.0-liter four-cylinder that comes up with 166 honest horsepower in a much better delivery curve. It's not fast, but it's much more predictable and steady with good power delivery at most speeds. The same six-speed automatic is attached, but with better tuning for the more well-founded 2.0L. This engine is also, surprisingly, tow-rated for up to 2,000 pounds.

With either engine, the EcoSport does shine brightly in city traffic with slower speeds and when maneuverability is key. The 2019 EcoSport is highly predictable in its steering, much easier to estimate for size-to-space geometry, and thus is easy to park. Like most subcompacts, the EcoSport will fit in just about anywhere and can find parking spaces where others might not.

On the highway, no matter the engine, the 2019 Ford EcoSport feels taxed. The 1.0L is whiny and loud at higher speeds while the four-cylinder has a better time of it. Yet even with the four, highway noise is higher than expected in the EcoSport and the engine will struggle a bit to pass at speeds over 65 mph.

The 2018 Ford EcoSport is priced to be about the average for the subcompact crossover segment. It's lowest-end price (base price) is a bit higher than the cheapest option, but most buyers will be in the SE trim at the more middle road price of around $24,000 or so, depending on options. At this price, the amount of amenities included in the EcoSport is slightly better than average, especially in infotainment.

Those buying an SE model with front-wheel drive might consider the small upgrade price (roughly $1,500) to get into a more well-equipped Titanium model with far more features and a potentially higher resale value. We also recommend that all shoppers consider the SE AWD model for its mix of value, resale, and equipment. 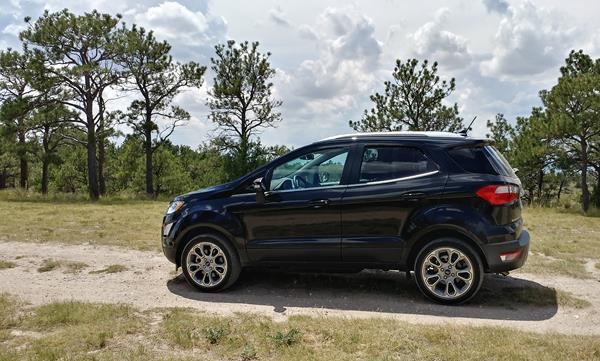 The 2018 Ford EcoSport faces some stiff competition in the subcompact crossover market. Top choices are the new Hyundai Kona, the smart and sporty Mazda CX-3, and the budget-minded Chevrolet Trax. Against these, the EcoSport is a tough sell on those fronts. The EcoSport offers similar pricing to the Kona and better fuel economy, but not much else. Compared to the Mazda, the Ford has a better up-front price tag, but nowhere near the eye-grab or drive appeal. Against the Trax, the Ford EcoSport offers more on all but the cost front.

The 2018 Ford EcoSport is a great entry into the North American subcompact crossover market. This fast-growing market is tough, though, and the Ford's European roots hold it back a little against more Americanized options from other makes. Shoppers in this segment have plenty of choices and should take advantage of that to find their best fit.