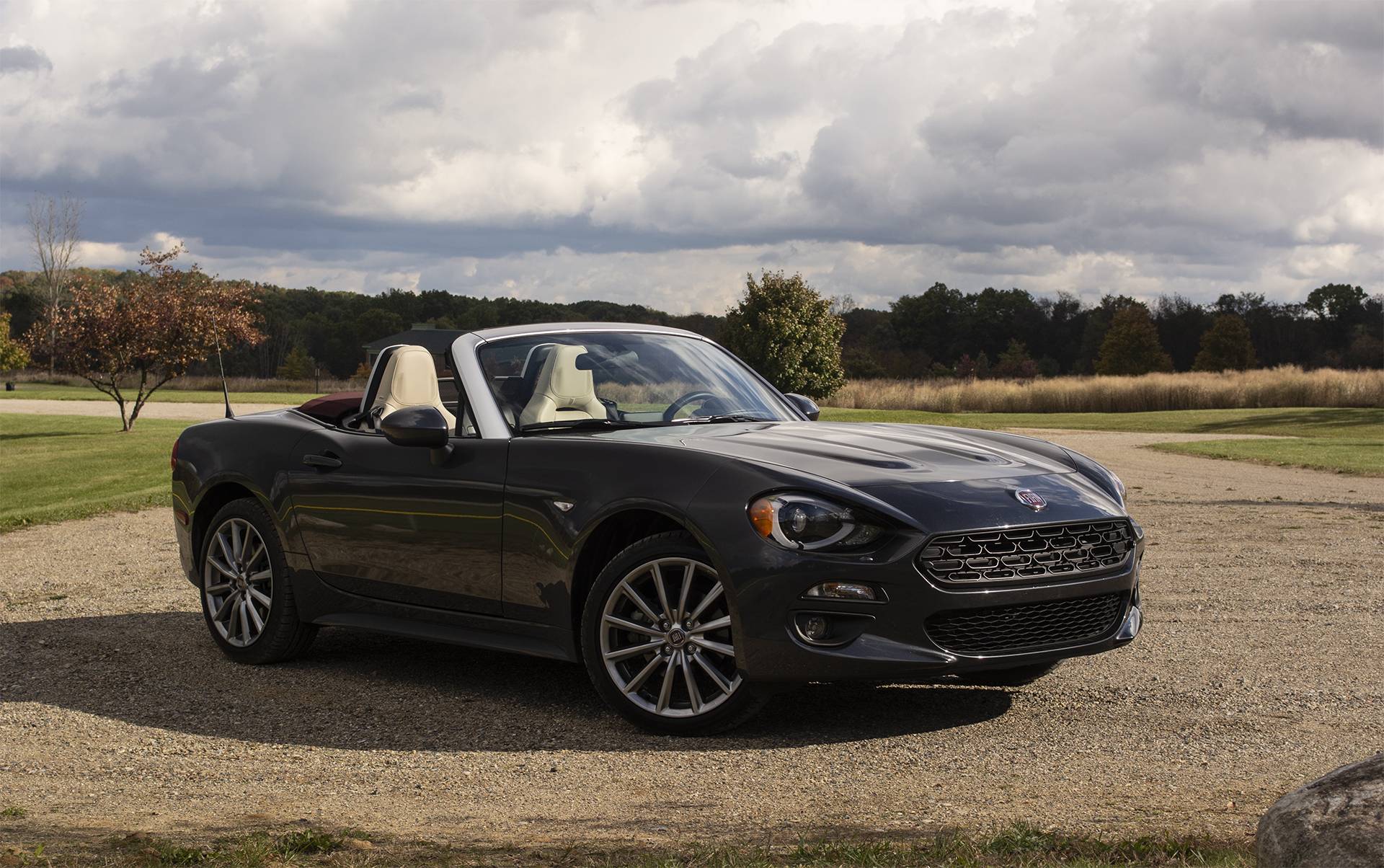 The Mazda MX-5 Miata is beloved by many as it brought back the charm of roadsters from the 1960s and 1970s with better reliability. Seeing this, Fiat has decided to partner up with Mazda with bringing one of its iconic cars, the 124 Spider. Fiat could have swapped the Mazda badges for their own and call it good, but they decided to make some changes to give the model its own flavor. Does this make the 124 Spider an alternative to an MX-5 Miata? 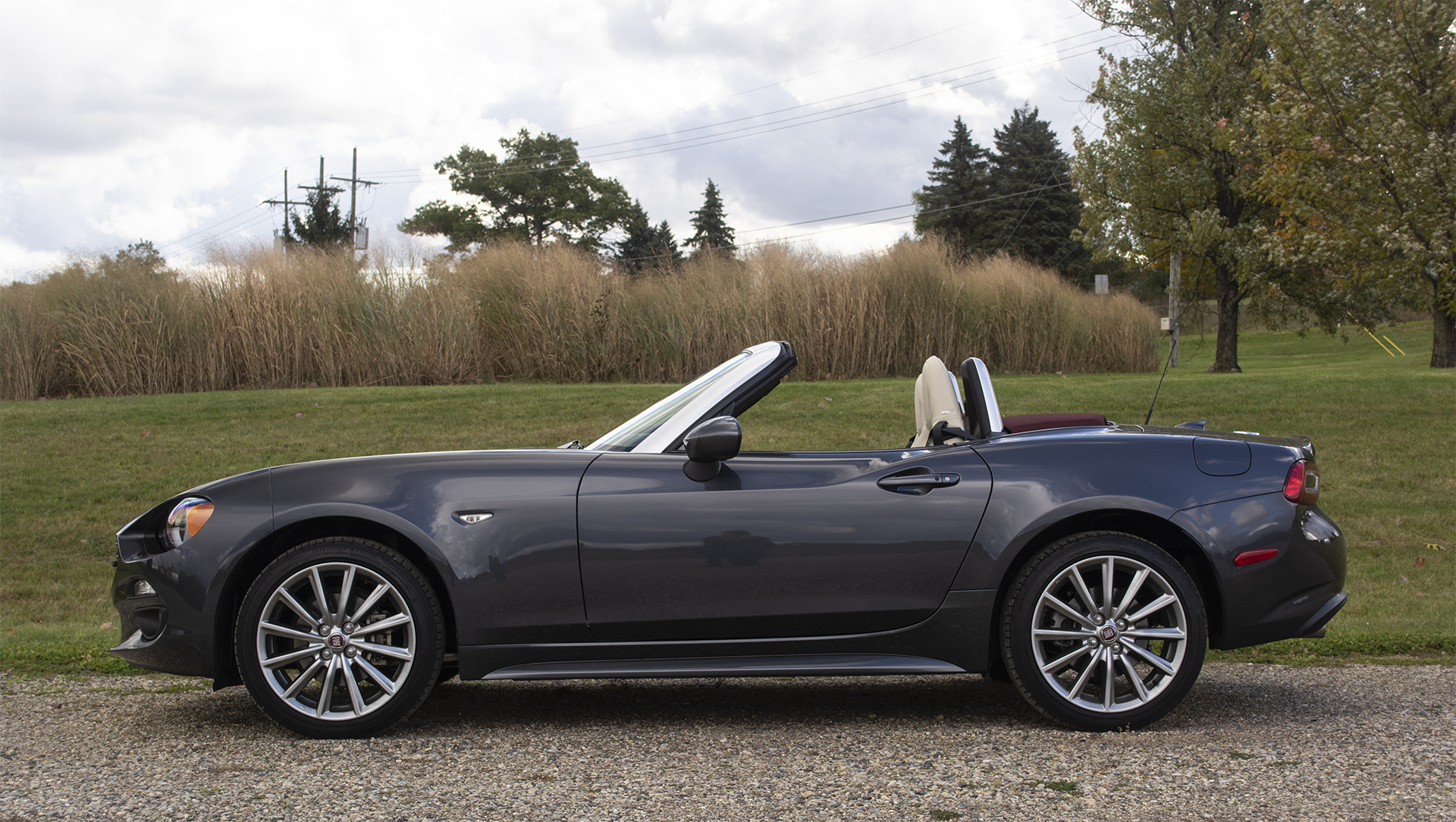 Fiat could only do so much when transforming the Mazda MX-5 Miata into the 124 Spider as some choices would cause dramatic changes to the overall structure, something that either company could not afford. But the work Fiat's designers were able to do really sets it apart from the Miata. It begins at the front with a wider grille, oval headlights, and raised fenders. The side profile reveals Fiat has added a few inches to the front and rear ends to have it stand out from the Miata. The back is the most controversial point of the 124 Spider's design as it features a uniquely shaped trunk lid and bumper. To our eyes, the back clashes with the rest of the Spider's clean shape.

Unlike the MX-5 Miata, the 124 Spider is only available as a soft-top. Putting the top down is quite simple as you need to undo a latch and fold the top into a compartment behind the seats. It only takes seconds to do this. The reverse is just as easy as you need to pull a latch behind the seats, raise the top, and lock it into place. The top also does an excellent job of keeping the interior warm in cold weather. 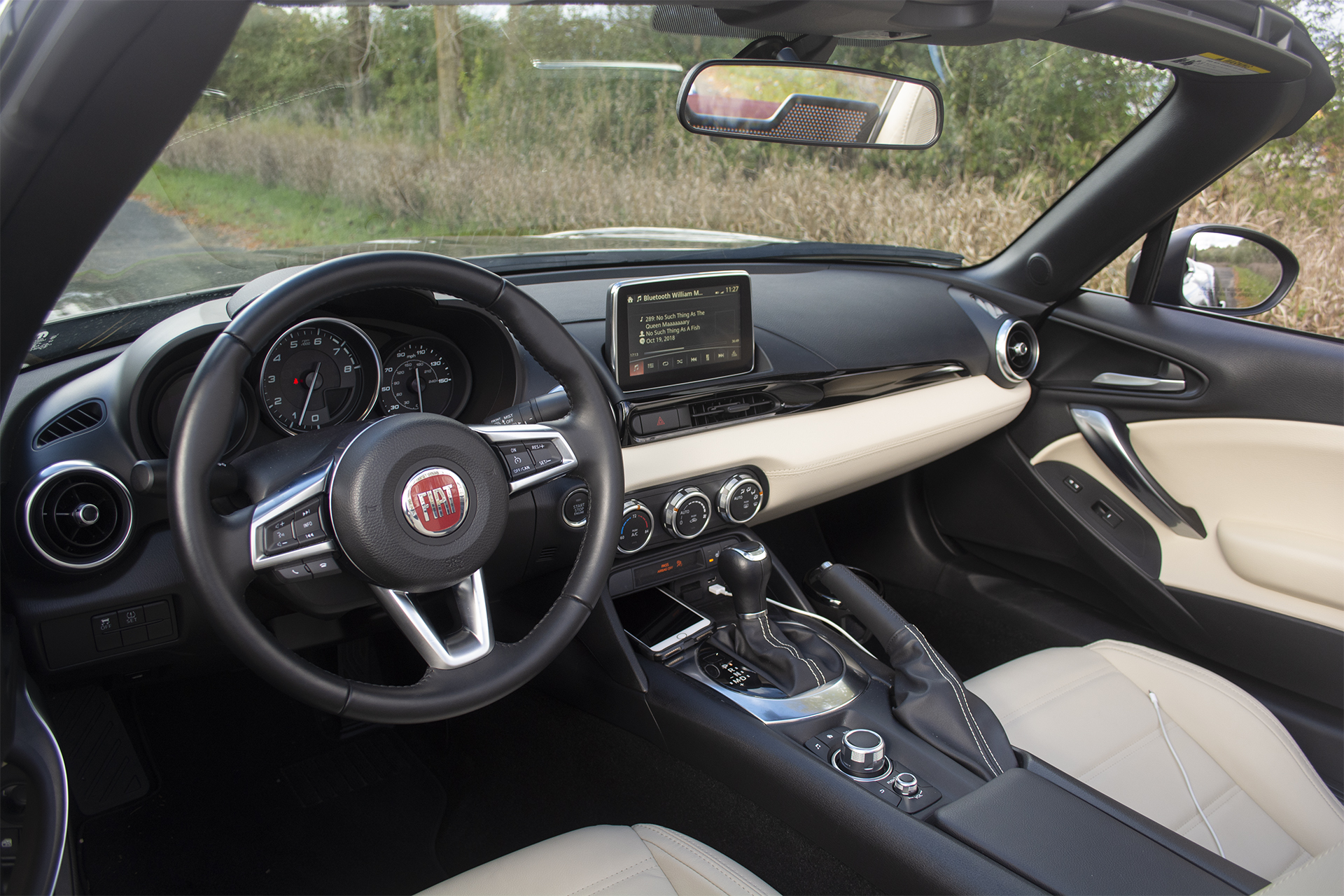 At first glance, the 124 Spider's cabin doesn't look that much different from the MX-5 Miata. The only real changes you may pick out are the Fiat emblem on the steering wheel and new fonts for the instrument cluster. But get settled in and it becomes clear that Fiat has done a bit more work. Material quality is noticeably higher than in the MX-5 Miata with more soft-touch materials and brightwork.

Due to the low ride height of the 124 Spider, it can be a bit of a hassle to get in and out. We found that sitting inside with our legs out and turning around made it slightly easier to enter and exit. Space is quite tight, especially for those above six feet due to the small size of the interior. At least the seats do offer slightly more padding than in the MX-5 Miata, making it slightly more comfortable for a long road trip.

Don't expect to find much cargo space in the 124 Spider. The trunk only offers 4.9 cubic feet, making it enough for a couple of small bags for a weekend trip. Inside, there are only a couple of storage bins to throw small devices like your smartphone into. 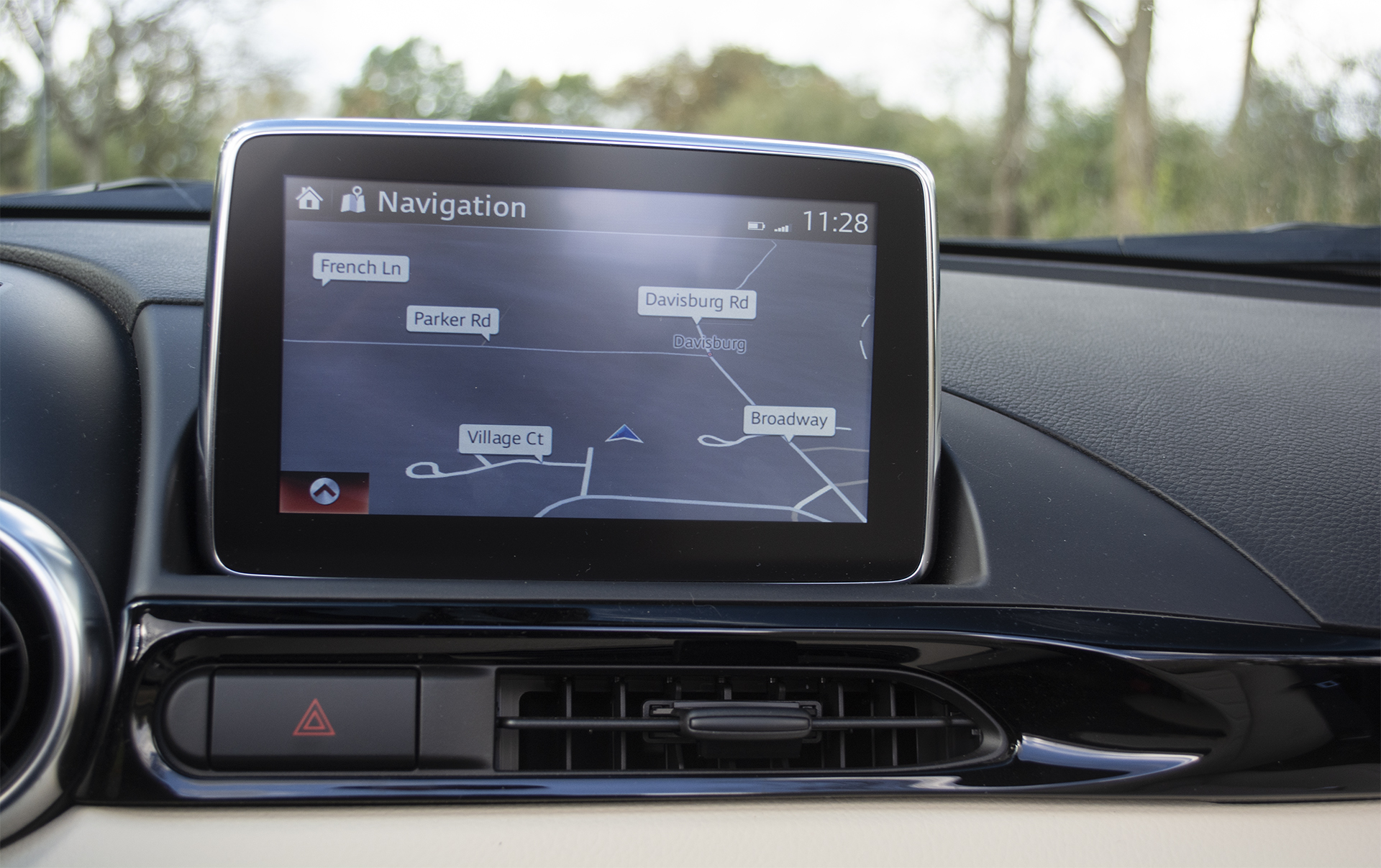 The base 124 Spider Classico uses a three-inch non-touchscreen radio, while the Lusso and Abarth come with a 7-inch touchscreen with the Mazda Connect infotainment system. The Classico can get the touchscreen as an option. Our test Lusso featured the optional Navigation system.

We have written a lot about our mixed feelings on the Mazda Connect system. Trying to the use the touchscreen is frustrating as it is difficult to tell which parts of the system are touch enabled. Also, the system locks out touch inputs when the vehicle is in motion. The black and red color scheme makes the system feel older than it is. If you want Apple CarPlay and Android Auto intergration, you're out of luck since it is not available. That might change with the 2019 model as Mazda has added it to the 2019 MX-5 Miata. On the plus side, we like the controller knob and shortcut buttons on the console. It makes moving around and using the system much easier.

The Fiat 124 Spider's predicted reliability is somewhat mixed. J.D. Power says it will be about average, while Consumer Reports rates it slightly below average. Fiat as a whole didn't fare so well in J.D. Power's recent initial quality study where it finished towards the bottom.

At the time of this writing, neither the National Highway Traffic Safety Administration (NHTSA) nor the Insurance Institute for Highway Safety (IIHS) has crash tested the 124 Spider.

In terms of safety equipment, the 124 Spider has the basics such as airbags, anti-lock brakes, traction and stability control; and tire pressure monitoring. Blind spot monitoring, backup camera, and rear parking sensors are available on the Lusso and Abarth via the optional Comfort and Convenience Group. For 2019, the backup camera is standard on all 124 Spiders. 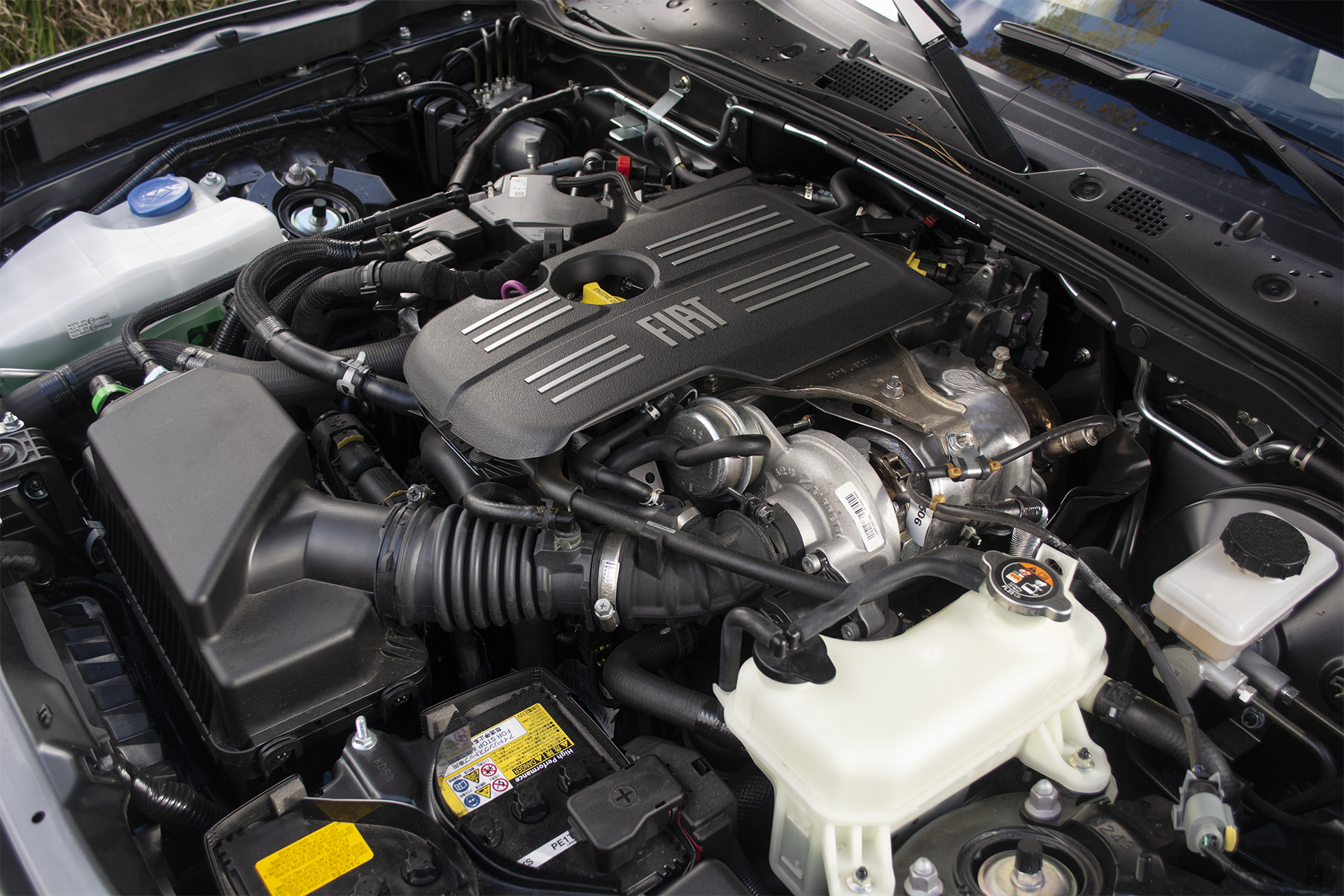 Fiat kicks the 2.0L SkyActiv four-cylinder from the Miata and replaces it with a turbocharged 1.4L MultiAir four-cylinder producing 160 horsepower and 184 pound-feet. The Abarth gets four more horsepower thanks to a new exhaust. A six-speed manual is standard, but our tester came with the optional six-speed automatic.

With 5 to 9 more horsepower and 36 more pound-feet of torque, the 124 Spider should be quicker than the Miata. But on the road, the Miata trounces the 124. There are a few reasons for this. One is that the torque isn't available on the lower-end of the rpm band. You need to rev the engine towards 3,200 rpm and above to get that turbo thrust. The six-speed automatic loves to upshift to help boost fuel economy, which in turn leaves you without turbo boost. Finally, the 124 is about 100 pounds heavier than the Miata. But once you do get in the 124 Spider in the turbo zone, the exhaust note will amuse you with a brassy note.

One area that the 124 Spider does give the Miata a run for its money is ride comfort. All models except for the Abarth have a softer suspension tune which allows for a slightly smoother ride over bumps and other imperfections. No, it will not rival a luxury sedan in terms of comfort. But drive a Miata and 124 Spider back to back, and the difference is quite noticeable. This softening doesn't affect the overall handling. Like the Miata, the 124 Spider darts into turns with minimal body roll and quick steering. 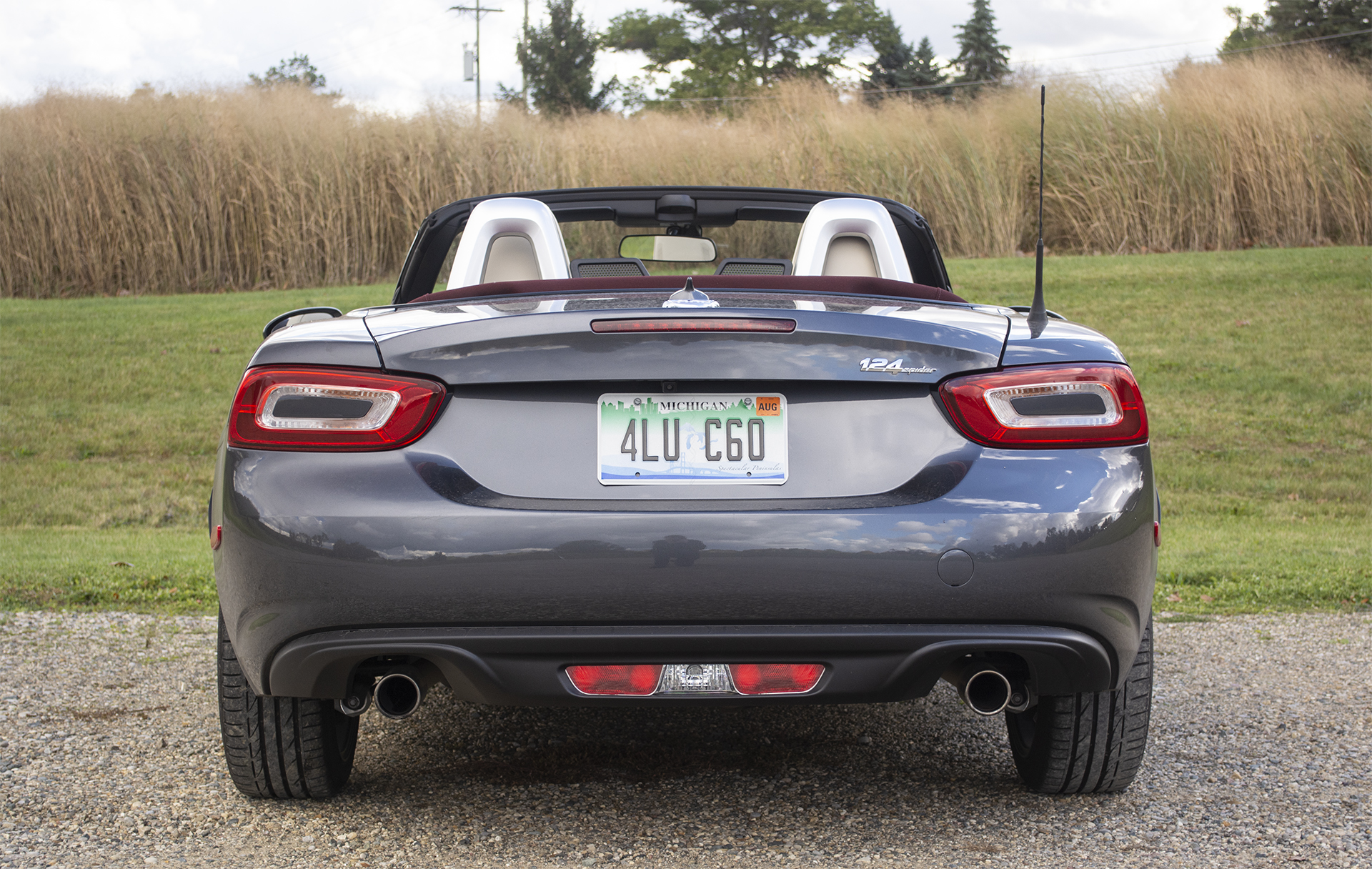 The 2018 Fiat 124 Spider lineup begins at $24,995 for the base Classica and climbs to $31,440 for the Lusso Red Top Edition. Our Lusso Red Top Edition came to an as-tested price of $32,435 with destination. We have two recommendations for the 124 Spider. Most buyers should consider the Lusso at $27,595 as it comes decently equipped with 17-inch wheels, automatic headlights, backup camera, and heated front seats. Those wanting a sporting edge, only need to spend a few hundred dollars more for the Abarth. It includes a sport suspension, limited-slip differential, quad-outlet exhaust system, and a more aggressive exterior treatment. 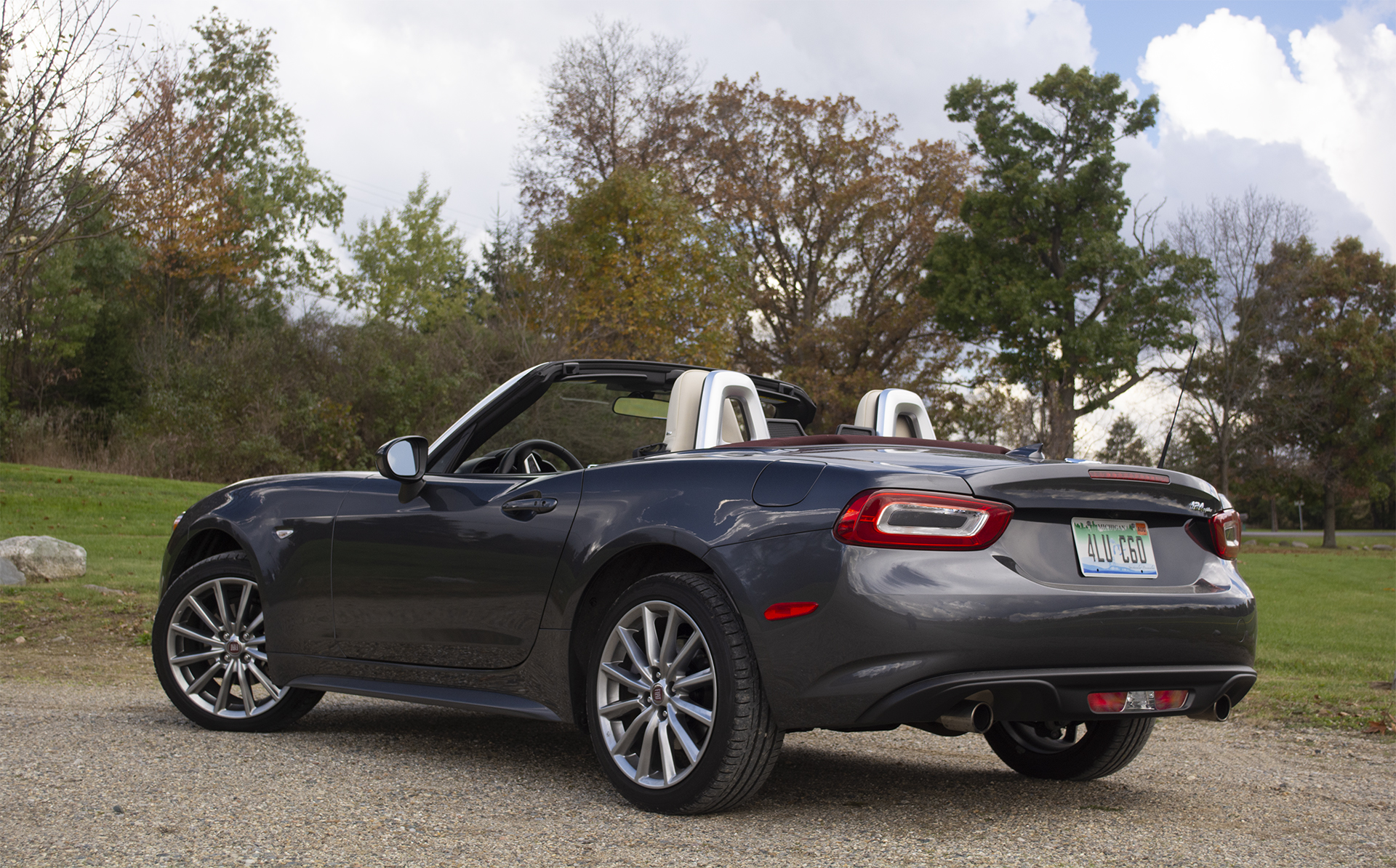 The deadliest rival to the 124 Spider is the model that it is based on, the Mazda MX-5 Miata. Despite being similar in many ways, the MX-5 Miata is slightly faster in the run to 60 mph thanks to its naturally-aspirated four-cylinder engine. The Miata also has a slightly better reliability record than the 124 Spider. For 2019, Mazda has made some key changes that make it a tougher competitor to the Fiat. It begins underwood where the 2.0L four-cylinder has been reworked to produce 181 horsepower and a higher redline to improve performance. It also gets more safety equipment such as traffic sign recognition and automatic emergency braking. What may push some people away from the MX-5 Miata is the slightly stiffer ride and its aggressive exterior.

Toyota's 86 coupe is another option to consider. It offers slightly better handling characteristics than the 124 Spider, along with being a little bit more practical with a back seat that can be used for additional storage. But the 86 falters due to its 2.0L four-cylinder engine. It isn't powerful enough to let you fully exploit the impressive chassis underneath. The 86 is slightly more expensive than the 124 Spider, beginning at $26,455.

Fiat could have just taken the MX-5 Miata and slap some new badges on it. But they didn't do that. Instead, Fiat made some changes to make the 124 Spider unique. Some of the changes haven't quite worked out for the better like the turbocharged 1.4L engine. Others such as the softer tune for the suspension helps the Fiat stand out from its Mazda brethren. While we would still put the MX-5 Miata ahead of the 124 Spider as our favorite affordable sports car, it's nice to know there is another choice for those who want something slightly different.