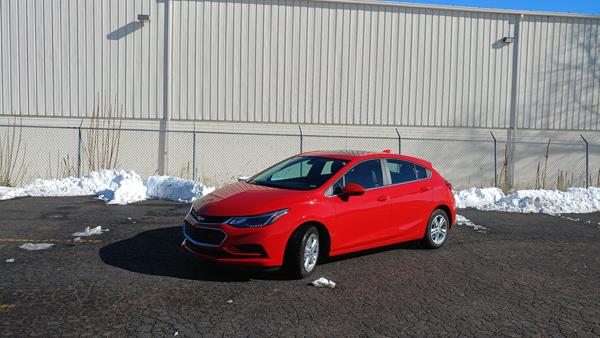 The Chevrolet Cruze was redesigned a couple of years ago, with the new hatchback and a diesel engine option coming out last year. This year both the diesel and hatchback are available in one model, completing the new Cruze lineup.

The little 2018 Chevrolet Cruze is sporty and economical, and has an appealing interior. With versatility and comfort in spades, it's a great entry-level compact option. The interior design and on-road presence are high points for this little car, marking it as a highly competitive option for small-car buyers.

The 2018 Chevy Cruze is a five-seat sedan or hatchback available with a gasoline or diesel engine option. The sedan model has four trim levels and the hatchback has two.


What We Love About the 2018 Chevrolet Cruze:


What We Don't Love About the 2018 Chevrolet Cruze: 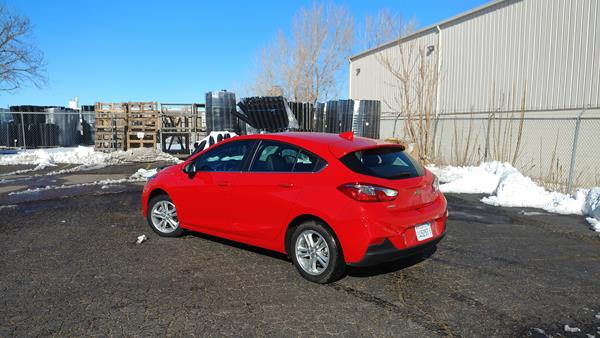 The 2018 Cruze is a contemporary little car with a simple, yet somehow upscale appeal to its look. A slightly pointed nose features a divided grille and sloped, three-pronged hood over rounded fenders that match the slope above. A straight line across the bodywork, swooping slightly and running through the door handles, opposes the rounded lines ahead, and creates a focal point for the rounded roofline and upward-sloping lower cut below.

Harder cuts for the fog lamp bezels, angled headlamps and sharp tail lights run against the curvature of the bodywork. These contrasts work together to build a whole that's more than the individual elements. In the sedan, the rounded roofline flows from the hood to the deck lid in a singular curve. In the hatchback, the curve is gentler but broken only by the spoiler above the hatch.

The 2018 Chevrolet Cruze sedan is a good looking car, but our true love is the hatchback, with its more forward-tilted, fast-paced feel.

The 2018 Chevrolet Cruze offers a good-sized cabin with plenty of open air. Most vehicles in this class are either larger than life or too cozy, but the Cruze finds a nice middle ground. It avoids the claustrophobic feel of many compact vehicles without getting overly window-happy or skimping on the headrest.

We like the instrument cluster and driver's cockpit, which is nicely laid out and easy to find a comfortable spot in. Even for the big and tall. The high roof and well-designed seating means that getting in and out of the little Cruze is far easier than can be said of most rivals. 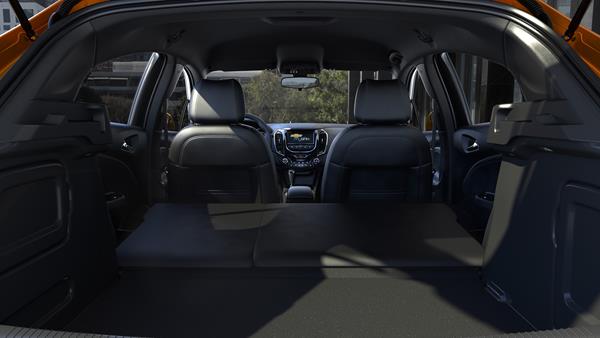 Unfortunately the same can't be said of the rear seating, which is less friendly to the tall or long legged. The sloping roof (on the sedan and hatch) pinches into the entryway and the higher seating to accommodate leg comfort means a more difficult climb into the car. Three across in the back row is doable if the three are kids, but add child safety seats or an adult to the mix and the rear bench becomes very cramped.

In the hatchback, a little more room thanks to the more open rear area means that headroom in the back is a touch better - at least in feel. Cargo space also expands there by about 7 cubic feet, most of which is added above the floor rather than on it.

The 2018 Cruze's cabin materials are very well chosen and used well throughout. We like the large infotainment screen, the smart use of leather and soft plastics, and the quality found in most of the materials choices. The Cruze is generally more upscale than the cheaper options in the compact class, especially in terms of road noise and interior design.

Chevrolet's infotainment interface has come a long way in the past couple of years and is far better than it's ever been. It's above par for the market, especially in this class, and MyLink looks and acts like a proper modern software suite. The uncluttered and attractive interface is easy to learn and comes standard with Apple CarPlay and Android Auto, the latter of which has far fewer annoyances than previous renditions.

The only serious knock on the MyLink interface is with its voice recognition/activation features, which can sometimes assume odd inferences from your commands. Oddly, it understands most common people names (and phonetic variants) well for phone calls, but has a rough time understanding much else. We found that using Siri or Google Voice was a much better option and can be triggered by simply holding the voice command button for a bit longer until your device beeps. 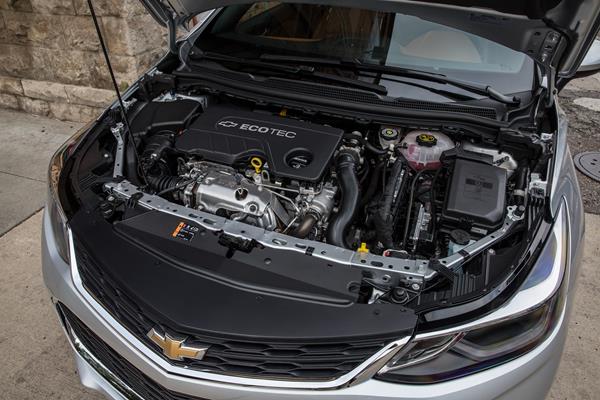 The 2018 Chevy Cruze has great fuel economy numbers no matter its body style or engine choice. We drove the 2017 Cruze sedan last year and found that the little gas engine offers good returns in the real world similar to the EPA estimates for the car at 29 mpg in the city and 40 mpg on the highway. The hatchback with the gasoline engine gets a few points lower at 27 mpg city and 37 mpg highway. The manual transmission drops highway mpg by a couple of points as well.

In the diesel engine option, the Cruze gets 31 mpg in the city and 52 mpg on the highway in the sedan, and 30 mpg city and 47 mpg highway in the hatchback. Driving the 2018 hatchback diesel, we achieved an average of 40 mpg overall in our mixed bag of driving and passenger loads over more than 200 miles. The standard stop-start system, which is standard and cannot be shut off, is more obvious in the diesel than in the gas, but not overly intrusive.

Although no useful reliability scoring has been issued by any trusted source for the 2018 model year Cruze, the 2017 model year is virtually identical and it received top scores then. We expect that to continue into 2018 with an "Among the Best" score from J.D. Power and Associates in their Vehicle Dependability Study. The lack of recalls for 2018 and the industry standard 3-year/36,000-mile warranty offered are bolsters to that score. 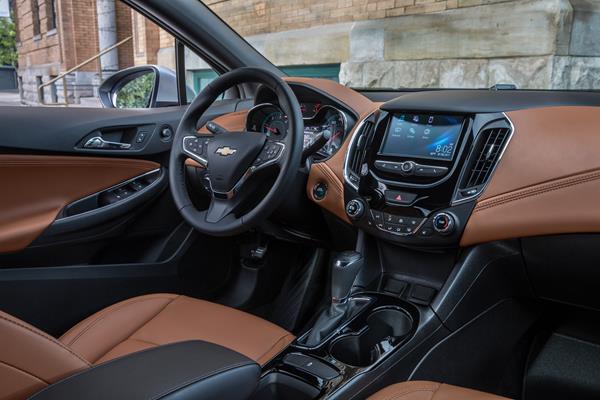 The 2018 Chevy Cruze has received a 5-Star overall rating from the National Highway Traffic Safety Administration (NHTSA) for crash tested safety, including five stars for frontal crash and four stars each for side and rollover tests. The Insurance Institute for Highway Safety has not yet published full test scores for the 2018 Cruze, but has given a top score of "Good" for its moderate overlap front test and side impact tests. The 2017 model, which is identical to the 2018, received top shelf crash scores and we expect the 2018 to carry that through.

The 2018 Chevrolet Cruze is powered by a 1.4-liter four-cylinder engine and a six-speed manual transmission by default. An automatic transmission is available on most trims. The Ecotec engine outputs 153 horsepower, but takes a minute to do so, making takeoffs from a standstill sluggish. Once wound up, the little engine does a good job of keeping the Cruze moving through traffic, even at freeway speeds.

The diesel option is a 137-horsepower turbodiesel with either a six-speed manual or (highly recommended) nine-speed automatic transmission. Get-up and go in the diesel is much better than it is in the gas option, but not as fast paced at higher speeds. Fuel economy is the primary reason to go with the diesel in the Cruze, not performance.

Outside of the sluggish starts mentioned, on the road the 2018 Cruze is an excellent little goer with plenty of oomph. Noise levels are generally low for most driving situations, even with the diesel, and highway noise is surprisingly low for a non-premium compact. We like the road feel and the confident handling of the little Cruze as well.

Visibility out of the Cruze sedan is good, with plenty of rearward visibility for parking and getting around. The hatch cuts that down considerably, enlarging blind spots over the shoulder and narrowing the rear view mirror's field. This is a negative, but not excessively so as the standard rear parking camera makes up for a lot of that loss in parking lots.

On some levels the 2018 Chevrolet Cruze is an excellent bargain compared to other options on the market. Its upscale appeal, quality interior and strong fuel economy numbers are matched by a great expectation for reliability. In the lower- and mid-trims of the gasoline variant, there's a lot to be had in a 2018 Cruze.

We feel the upgrade to the hatchback is a must for most buyers for its added versatility and better interior space. The automatic transmission is also much preferred for its added resale and higher mpg returns.

We only recommend the higher-cost diesel option to those who demand top fuel economy and are willing to pay upfront to get it. This model should be shopped against hybrids from the competition. 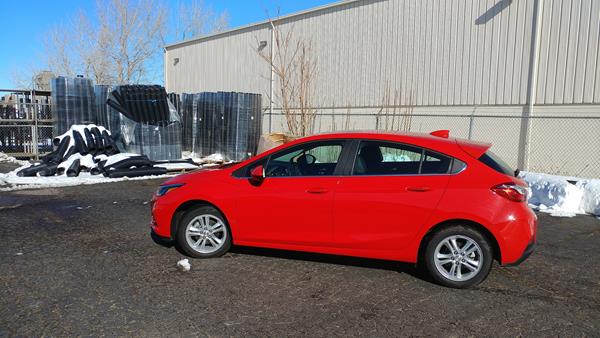 Out of these competitors, we like the Honda Civic and see it as a top seller for good reasons, with its roomy interior and smart design. The Hyundai Elantra is also well done on those same levels. The Ford Focus is more performance-oriented, with a sportier feel and eye-catching design quality. Against these, the Cruze compares well as an all-around option, but edges ahead when fuel economy or the diesel option are inserted into the mix.

Overall we're fans of the 2018 Chevrolet Cruze, especially in its hatchback form and with the diesel option for mpg maximization. This is not the best compact car on the market, but it's competitive with the best choices available. We think it's worth keeping on the short list for today's compact buyer.