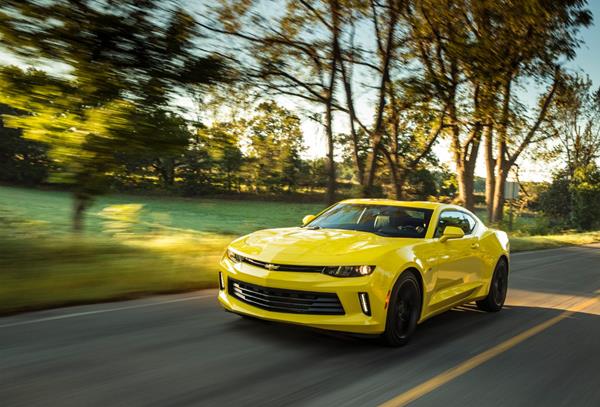 There's a lot to like about today's Chevrolet Camaro and more than a few reasons for sports car buyers to consider it. There are downsides as well, so buyers should be aware of what they're after.


What We Love About the 2018 Chevrolet Camaro:


What We Don't Love About the 2018 Chevrolet Camaro: 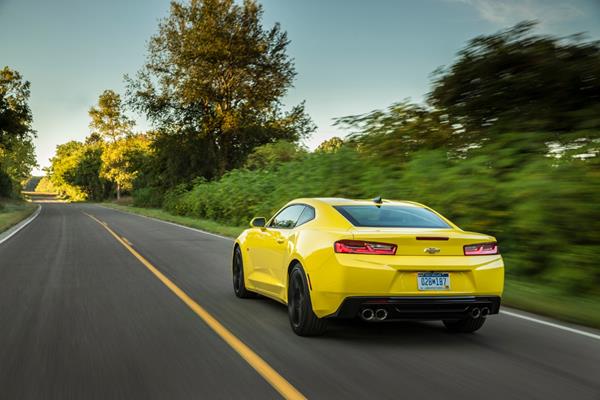 The 2018 Chevrolet Camaro is a great-looking beast with a lot of nicely done design elements. The GT-inspired roof, muscular fenders and fast-paced hood lines are all part of the overall sport-and-muscle appeal the Camaro holds. There are things most American pony cars all seem to have as classic elements, and the 2018 Camaro captures those well.

The Camaro's bowtie-clad grille is flanked by peering headlights that match the thin grille. Below that, an expansive air intake rides on a Daytona-style front aero kit. Above, three parallel lines on the hood create a bulge as a promise of power beneath. This also creates a juxtapose for the dimpled airflow crease in the roof. Hunched fenders and deep haunches finish the Camaro's muscular appeal, building a prowling cat design to the bodywork.

The lower panel carries a deep cut that offsets the relatively unadorned upper bodywork and beltline. That lack of obvious curvature in the upper body helps to accent the deeply curved fender lines at the rear, creating the heavy-haunched muscle car look the Camaro is known for. The overall design language is a coupe style with elongated corners.

The total appeal for the 2018 Chevrolet Camaro is in its fast-paced, road-ready, powerful stance. 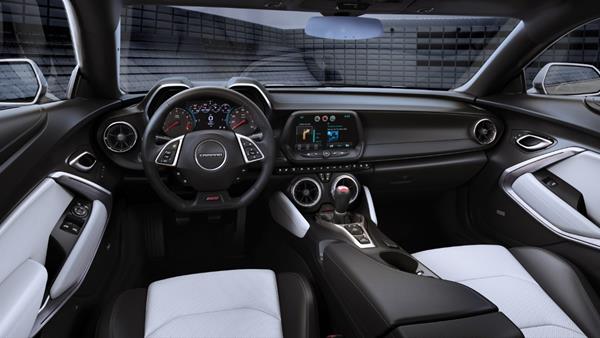 The interior of the new-generation Camaro is far better than it was in previous renditions. However, compared to other options on today's market, the 2018 Camaro still falls short. High points include good materials quality, and great styling and flow. Downsides include poor visibility and hit-and-miss ergonomics.

We like the mix of Euro design with American know-how in the Camaro's cockpit, with the dashboard having a flow that directs toward the driver. This is something normally only found in European sports cars, with Americans generally leaning toward a squared-forward design instead. This creates a sports car feel that isn't always present in the Camaro's rivals. Controls and spaciousness are very American, keeping one of the major appeal points for American muscle cars intact.

Seating in the front of the 2018 Camaro is good with excellent bolstering and good roominess all around. The side bolsters, in particular, are supportive without being intrusive in the factory seating. The seating upgrades for sportier options are a good fit for average-size drivers, but will likely poke larger drivers the wrong way or shove at shorter drivers. We prefer the factory seats to the sport-themed upgrades.

The rear seats in the Camaro are mostly for show, being large enough to accommodate small children, a dog or some groceries. Getting in and out of them is a squeeze, and once there, legroom and headroom are very limited.

Trunk space, on the other hand, is huge with lots of room for items, including a full golf bag. The convertible models limit this somewhat, with the top down, of course. 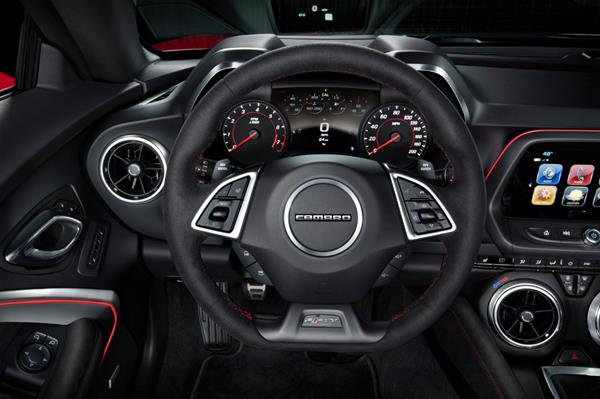 Chevrolet's infotainment interface is well done and should rate a 10 for functionality. Yet some aspects of the Camaro's design take it down a notch. Most notably, the glare-prone screen positioning, which often receives glare from trim item and side mirror reflections at night. Voice recognition in the Camaro is also mixed.

The infotainment is otherwise excellent. The Camaro comes standard with a 7-inch touchscreen and MyLink system with basic functionality. The upgrade is to an 8-inch screen that adds some apps, Android Auto and Apple CarPlay, and more.

Screen output is crisp, responses are fast and functionality is good.

Fuel economy returns in the 2018 Camaro depend heavily on the powertrain chosen. The base engine returns slightly better than average economy at 20 mpg in the city and 30 mpg on the highway with the manual transmission. Things improve with the automatic, which boosts mpg to 22/31.

The Camaro's V8 options are rated at 14 mpg in the city and 20 mpg on the highway with the manual transmission, and 17 mpg city, 27 mpg highway in the automatic. Upgrading to the performance-oriented ZL1 package lowers mpg to 12/20 city/highway (automatic trans) and 14/20 with the manual.

For the best fuel economy versus performance mix in the real world, we found the V6 model had the best balance. The four-cylinder is also good, but lacks the throaty appeal the V6 can give. Those who want the raw feel of a rumbling V8 will get a better-than-expected balance from the 6.2L V8. 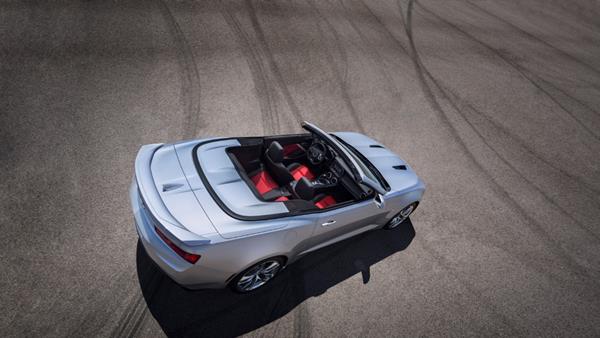 Reliability in the 2018 Chevrolet Camaro is rated "About Average" in the J.D. Power and Associates Vehicle Dependability Study. This matches the rating given in 2017 and 2016 for the car.

The Camaro sees a little upgrade for 2018 in terms of safety. The National Highway Traffic Safety Administration (NHTSA) has given the 2018 Camaro a 5-Star overall rating in crash tests, with four stars for frontal crash results and five stars each for side and rollover results. The Insurance Institute for Highway Safety (IIHS) rates the 2018 Camaro with top scores of "Good" on all tests except the roof strength, which receives a second-best "Acceptable" score.

There is a lot to like about the varied performance metrics found in the 2018 Chevrolet Camaro. The base model's turbocharged 2.0-liter four-cylinder engine outputs an impressive 275 horsepower and 295 pound-feet of torque. A six-speed manual transmission is optional (and recommended for fun) and an eight-speed automatic is standard.

Rear-wheel drive is standard in all Camaro models. For the price and as an entry-level offering, the little turbo-four is an excellent engine that makes the Camaro feel sporty without breaking the bank. 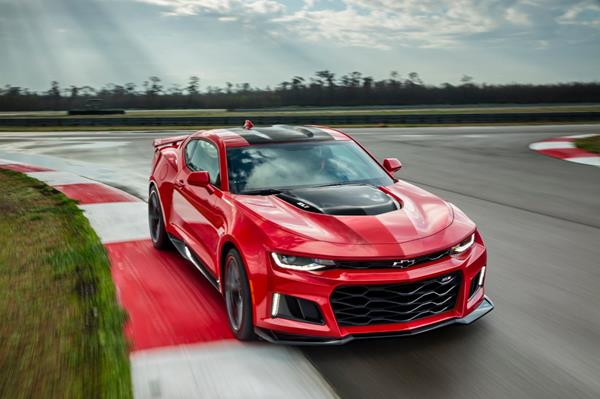 The upgrade is to a 3.6-liter V6 that outputs 355 hp and 285 lb-ft and utilizes the same transmission options as are found in the four-cylinder. This engine has a broad band of output and plenty of gumption. Zero to 60 mph times of 5 seconds are realistic with this powertrain.

The first of the V8 engine options is a 6.2-liter block that is familiar from the Corvette. This engine produces 455 horses and 455 lb-ft of torque in the SS model. A six-speed manual transmission is standard while an eight-speed automatic is optional. This model can achieve 0 to 60 mph times of less than 4 seconds with some practice.

Finally, the same 6.2L V8 can be supercharged to produce 650 horsepower and 650 lb-ft of torque in the ZL1 package. The six-speed manual transmission is, again, the standard while a new 10-speed automatic is optional. Top speed is over 200 miles per hour and 0 to 60 mph times are in the 3.5-second ballpark.

Performance on the road and track vary considerably, according to the Camaro's equipment. The base model four- and six-cylinder engines are good road-goers with smooth cornering and a good highway feel, but lack the track-ready stiffness available in upper trim options. The exception here is the 1LE Track Performance option for the V6, which adds some of the equipment from the SS for a sportier feel.

The base-level V8 found in the 1SS, 2SS and SS 1LE Track Performance packages, brings rev-matching to the manual transmission and adds Brembo brakes, a more sport-tuned suspension, and upgraded gauges to go with the rear spoiler. A mechanical limited-slip differential goes a long way to improving cornering over the already-good dynamics of the Camaro's basic chassis.

Jumping into the ZL1 trim with its supercharged V8 makes the Camaro feel insanely powerful, almost to the point of ridiculousness, but adds even more performance spec to the car in the form of better tires, suspension changes and superior transmission metrics. Lots of upgrades in the new 1LE Extreme Track Performance package for the ZL1 take this to a new level with a carbon fiber hood and spoiler, wider tires and wheels, and race-oriented suspension damping.

We recommend the performance exhaust upgrade for the V6 and V8 engines and the brake cooling package for the non-Brembo packages. (It's standard on Brembo-equipped models.)

Whether on the road or track, the 2018 Chevrolet Camaro has a ton of appeal and great handling characteristics. This puts it well ahead of most of its muscle car competition.

The subjectivity of the term "value" when talking about sports cars is obvious. Choice of purchase usually equates to a buyer's brand loyalty, when it comes to American pony cars. Qualifying that with safety or performance metrics is usually an afterthought.

The 2018 Camaro does fare well compared to its contemporaries. Pricing is good with a base model running on par with the competition, and a strong-running sports-ready model is price competitive as well at around $40,000.

Resale values are highly variable, with the Camaro's perceived value depending a lot on its equipment packaging. Lower-end models tend to lose value quickly, while upper-end performance models often retain much of their value over time. 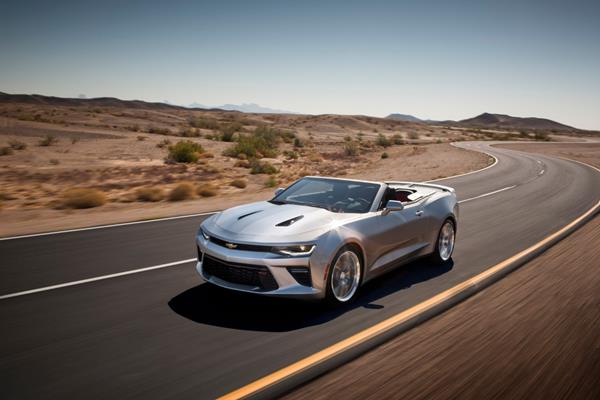 Competition for the 2018 Chevrolet Camaro obviously comes from its two long-time rivals at Ford and Dodge. The Ford Mustang began the pony car era and is the closest rival to the Camaro in terms of offerings and expectations. The new Mustang handles similarly to the Camaro on the road, but the Camaro holds a bit more cornering and performance.

The Dodge Challenger is a different beast from the Camaro, having a much larger body and heavier affect to its drive and muscle. When it comes to straight-line performance, the Dodge is likely the winner in the quarter mile, but when curves are added, the Camaro will easily get the checkered flag. Even their design and appeal are very different.

Other comparables to the Camaro could include European options like the BMW 2 Series or Mercedes-Benz C-Class. These are more refined vehicles with higher price points, and are not likely to be cross-shopped often.

We are big fans of the 2018 Chevrolet Camaro and its broad range of appeal to today's sports car buyer. With plenty of engine options, lots of trim access, and both convertible and coupe body styling, the 2018 Camaro is an excellent example of American sports done for the modern era.