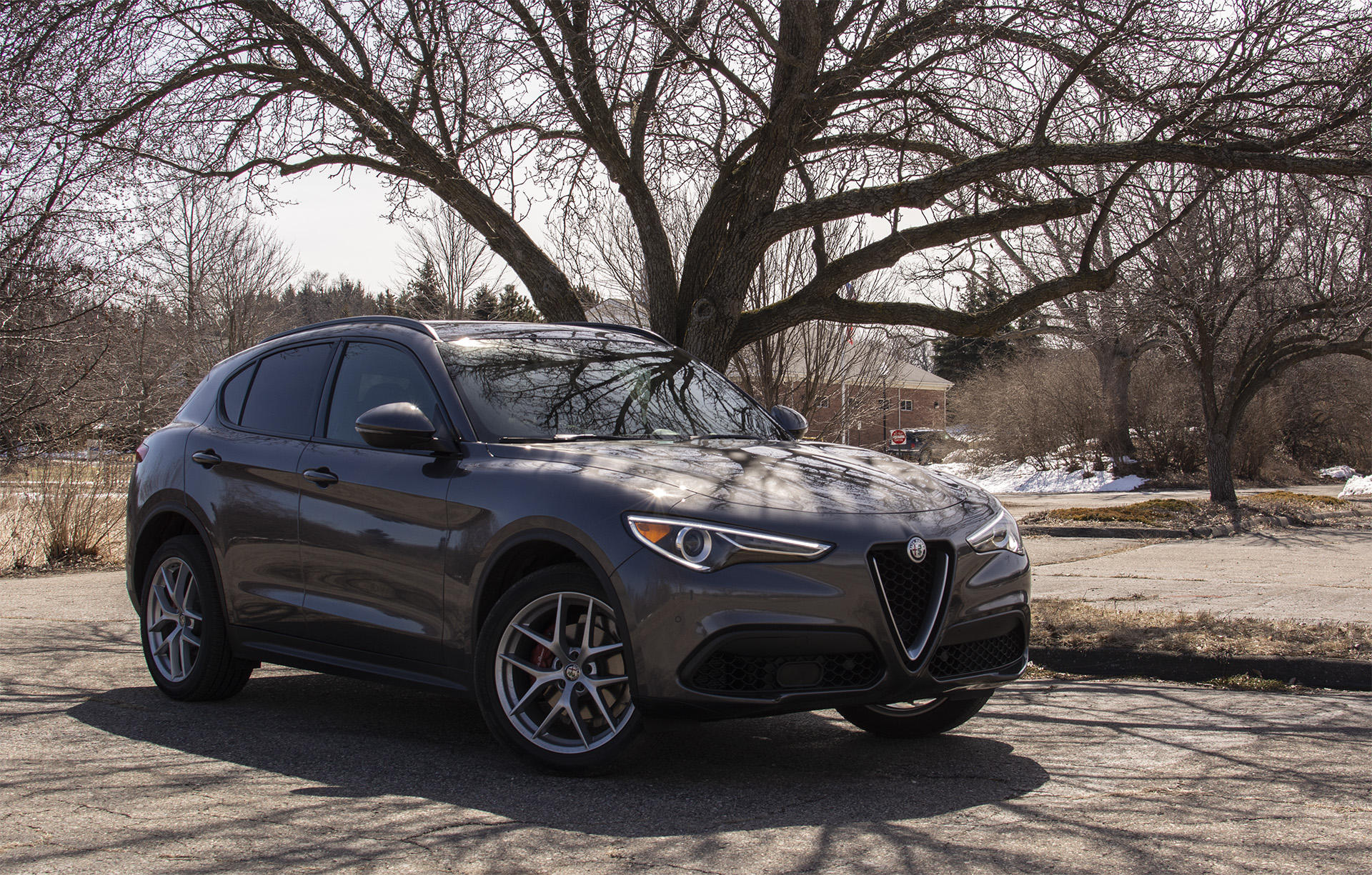 The compact luxury crossover marketplace is becoming a bit more crowded, with a number of established players and a seemingly endless amount of new contenders. Alfa Romeo's Stelvio is the latest entrant. The name is derived from a winding road in the Alps mountain range, giving a clue to one of the key selling points of Alfa's crossover: being fun to drive.

But the Stelvio also carries a fair amount of baggage on its roof. Alfa Romeo has a reputation for its vehicles being unreliable. Last year's launch of Giulia sedan didn't help, as a number of automotive outlets and car owners reported numerous issues ranging from the sunroof jamming to the model going into limp mode after only doing half a lap on a track. So far, it seems the Stelvio has avoided many of the pitfalls that happened with the Giulia.

We were concerned how the Stelvio would fare during our week-long test. At the end, we had no show-stopper issues, but felt somewhat mixed.


What We Love About the 2018 Alfa Romeo Stelvio:


What We Don't Love About the 2018 Alfa Romeo Stelvio: 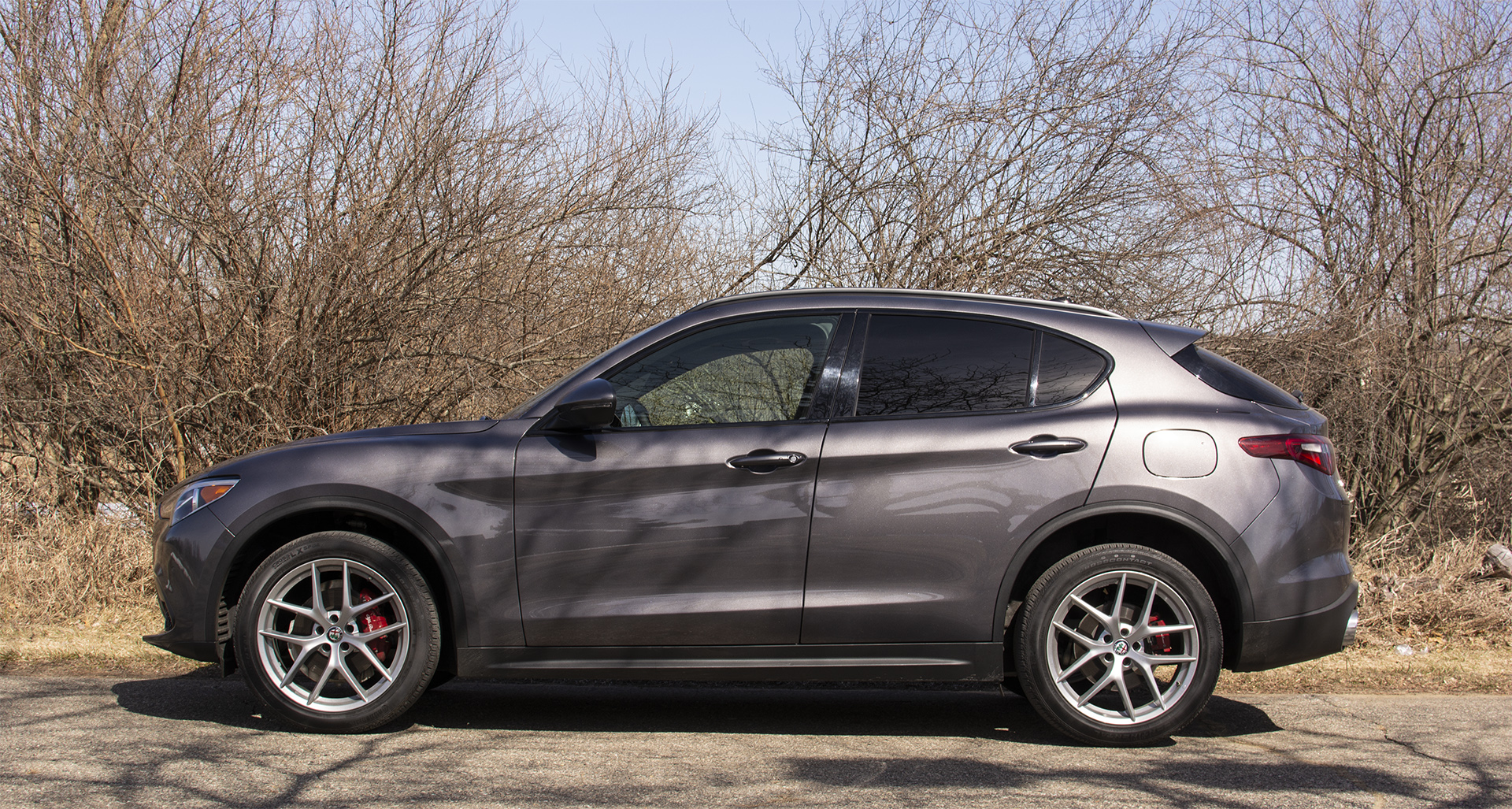 Alfa Romeo's design team deserves a round of applause for making the Stelvio stand out in what's becoming a very crowded field. The trademark Alfa design touches are here in force: triangular grille, flowing lines and large fenders.

One design touch we really like is the sloping rear glass on the tailgate that provides a roofline similar to a fastback. Alfa didn't go too crazy with fitting all sorts of body cladding to the Stelvio. There is a minimal amount running along the sides and a faux skid plate on the rear.

The only item we would change are the optional 20-inch wheels fitted to our tester. They don't quite fit in with the Stelvio's design. 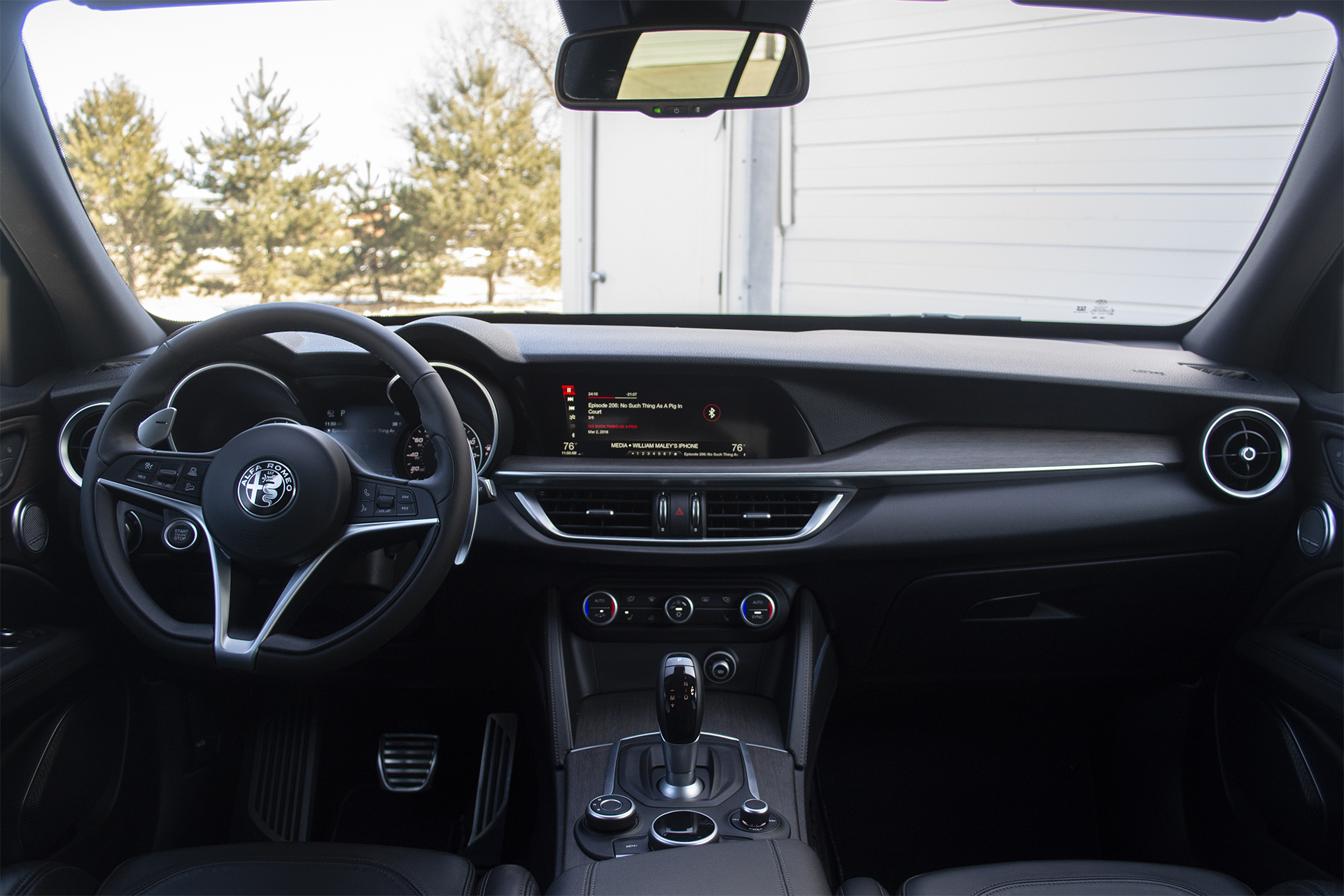 The Stelvio shares the same cabin design as the compact Giulia sedan. This is both good and bad. The good is a modern and minimalistic look that makes the Alfa stand out from the crowd.

Overall ergonomics are very good, as controls are within easy reach for the driver and passenger. Some of the materials, such as the dark wood trim and aluminum paddle-shifters behind the steering wheel, are impressive.

But other materials sour the luxury aspirations Alfa Romeo is trying to present. An example is the center console where the gear selector and controller knob for the infotainment system are made out of very cheap plastic. Not helping are the soft-touch materials used on the dash and door panels, which have a rubbery feel.

Our Stelvio tester came with a set of sport seats as part of an optional sport package. The seats provide increased side bolstering to hold you in during a bit of enthusiastic driving. Power seat adjustments come standard on all Stelvios.

One area that Alfa Romeo needs to some work on is the comfort aspect. For short drives, the seats provide a decent level of support. Longer trips reveal that more cushioning material is needed to prevent passengers from feeling sore. Space in the rear seat is okay for the average size adult, but taller passengers will be wishing for a bit more headroom.

Cargo space is toward the bottom of the class, with 18.5 cubic feet behind the rear seats and 56.5 cubic feet when folded. 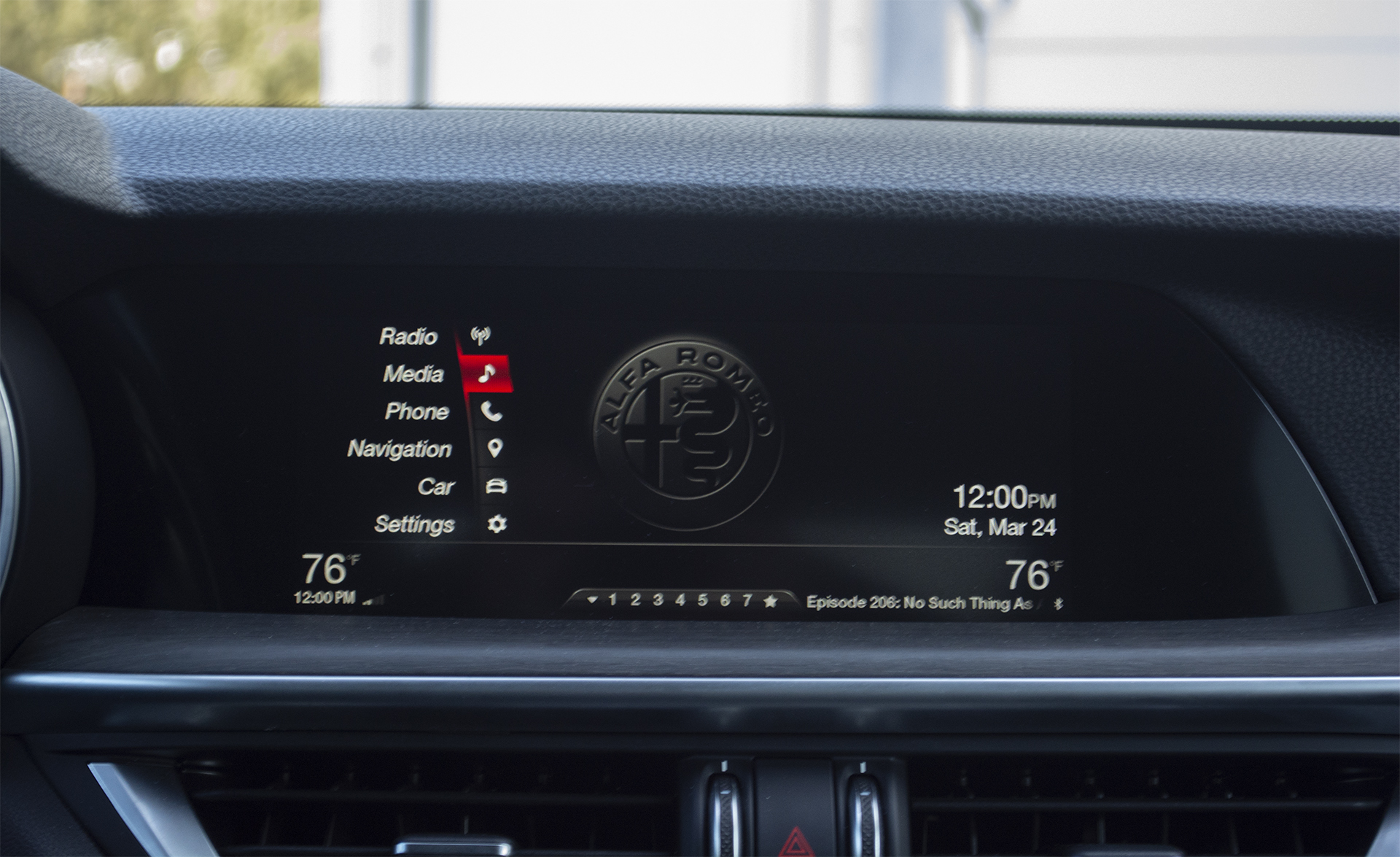 Being part of the FCA Group, Alfa Romeo had access to the excellent UConnect system with its easy-to-use interface. But Alfa decided to build-up their own infotainment system.

The base Stelvio gets a 6.5-inch screen, while the Ti features a larger 8-inch screen. Neither screen is touch-enabled, which means you'll need to use the controller knob or voice commands. The system isn't the easiest to use thanks, in part, to a complicated menu layout and narrow screen size. We found the system also required too much attention from the driver, making it tough to use while on the move.

But this only the beginning of the issues plaguing the Stelvio's infotainment system. One problem was how the system wouldn't play anything plugged into the USB port if it was paused for more than a minute or switched between various sources. The only way we could get the system to start play back up was to turn the vehicle off and on.

Another issue dealt with the Bluetooth system. It would take almost a minute for the system to find a phone and pair up. Other vehicles only take less than 20 seconds to do the same task. Finally, the system crashed twice. One of those times required shutting off the vehicle for a moment and then turning it back on. Alfa Romeo needs to do some serious work to this infotainment system.

Apple CarPlay and Android Auto are available as options on the Stelvio. Our test vehicle didn't come equipped with either. 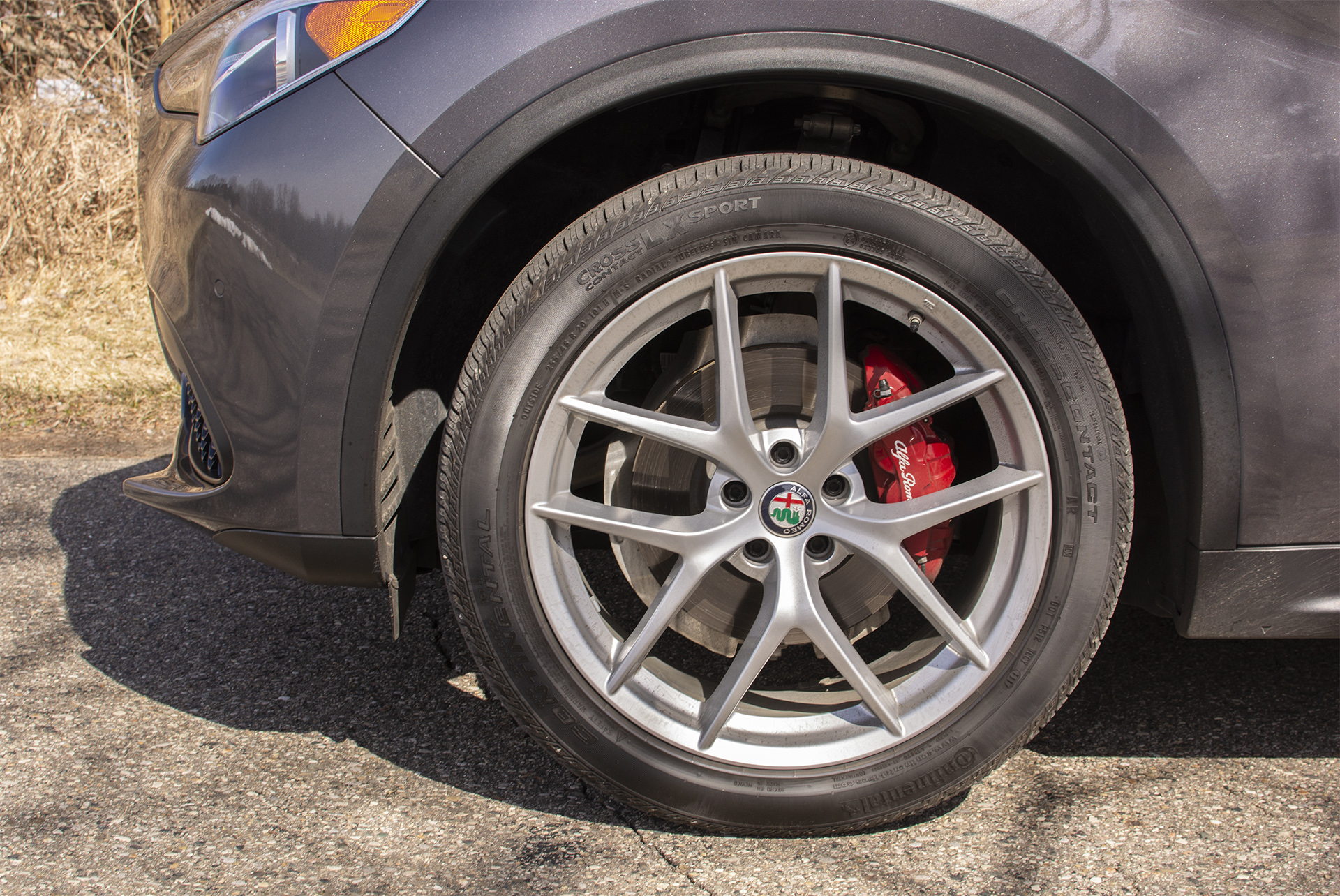 Consumer Reports rated the Stelvio as poor in their predicted reliability ratings. J.D. Power hasn't released any details on reliability or initial quality, at the time of this writing.

The Stelvio hasn't been crash tested by either the National Highway Traffic Safety Administration or Insurance Institute for Highway Safety. 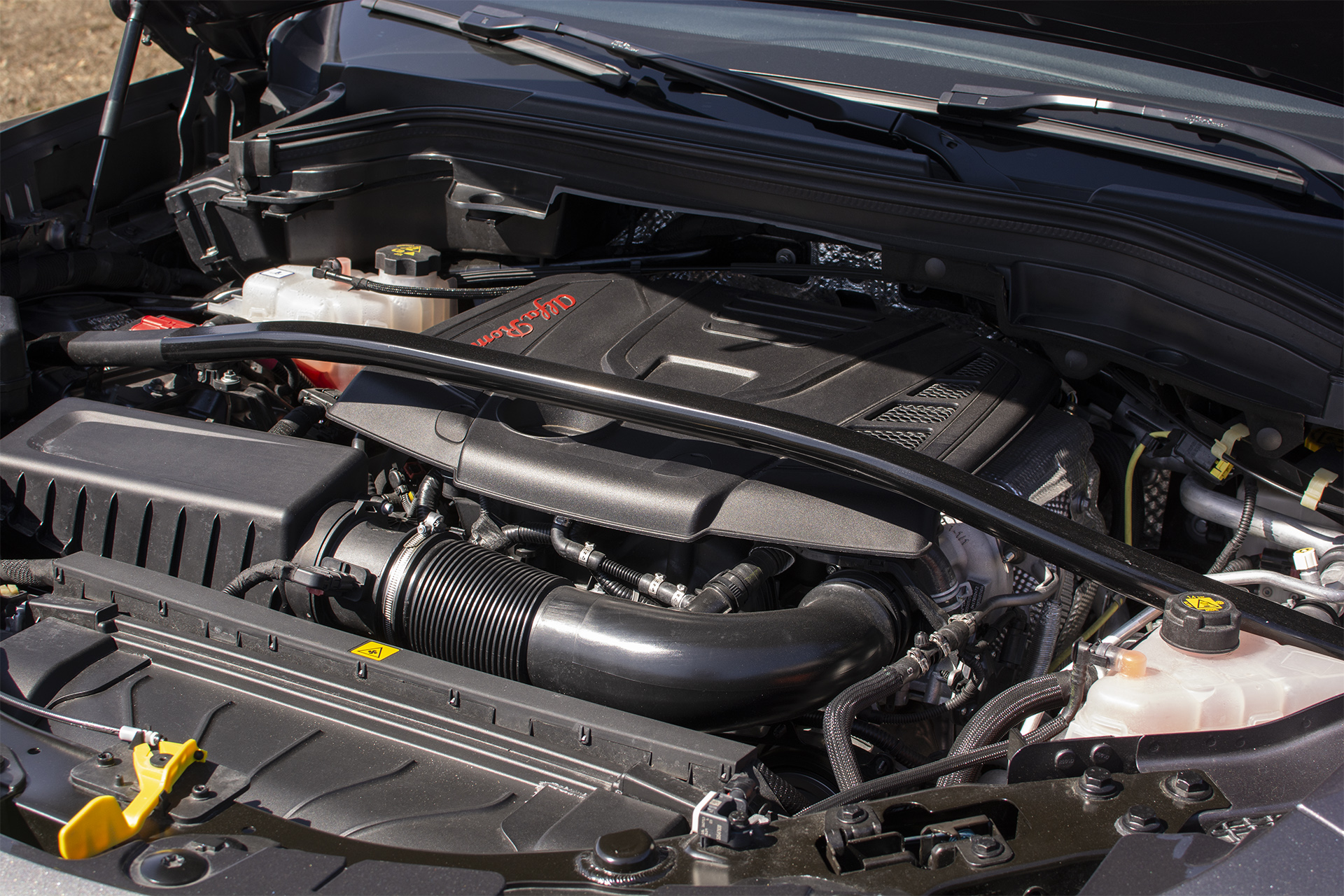 Most Stelvios like our Ti test car will come equipped with a turbocharged 2.0L four-cylinder pumping out 280 horsepower and 306 pound-feet of torque. This is paired with an eight-speed automatic and all-wheel drive.

Those who have a need for speed will be pleased to know that Stelvio is available with the twin-turbo 2.9L V6 found in the Giulia Quadrifoglio. This engine belts out 505 horsepower and 443 pound-feet of torque.

There is some turbo lag when leaving a stop. But once the turbo does spool up, it moves the Stelvio with gusto. Thanks to broad and flat torque curve, the engine makes it easy to get up to speed quickly in various situations such as merging onto an expressway. The eight-speed automatic is a bit of a mess. At low speeds, the transmission stumbles with slow gear changes. At higher speeds, gear changes are smooth and quick.

One disappointment with the turbo-four is the amount of noise inside the cabin. It sounds like an old diesel truck, despite its sporty aspirations. You might want to keep the volume up on the stereo to drown out the noise.

The Stelvio will surprise with how well it carves through a winding road. Body motions are kept in check and grip is impressive, even on wet surfaces. The steering provides decent weight and feel needed for exuberant driving. For normal driving, the Stelvio provides a compliant ride, with only a few bumps making their way inside. Road and wine noise are kept to average levels for the class.

One item that did alarm us was the brakes. Lightly press on the pedal and the vehicle didn't feel like it was slowing down. Press further down and the braking force was almost similar to a panic stop. Some of this can be attributed to the brake-by-wire system used on the Stelvio. Unlike a normal braking system where there is physical connection between the brake pedal and hydraulic brake system, a brake-by-wire system uses sensors to measure the amount of force and speed applied to the pedal. This information is then sent to the brake controller which applies the appropriate amount of braking force. More calibration work is needed. 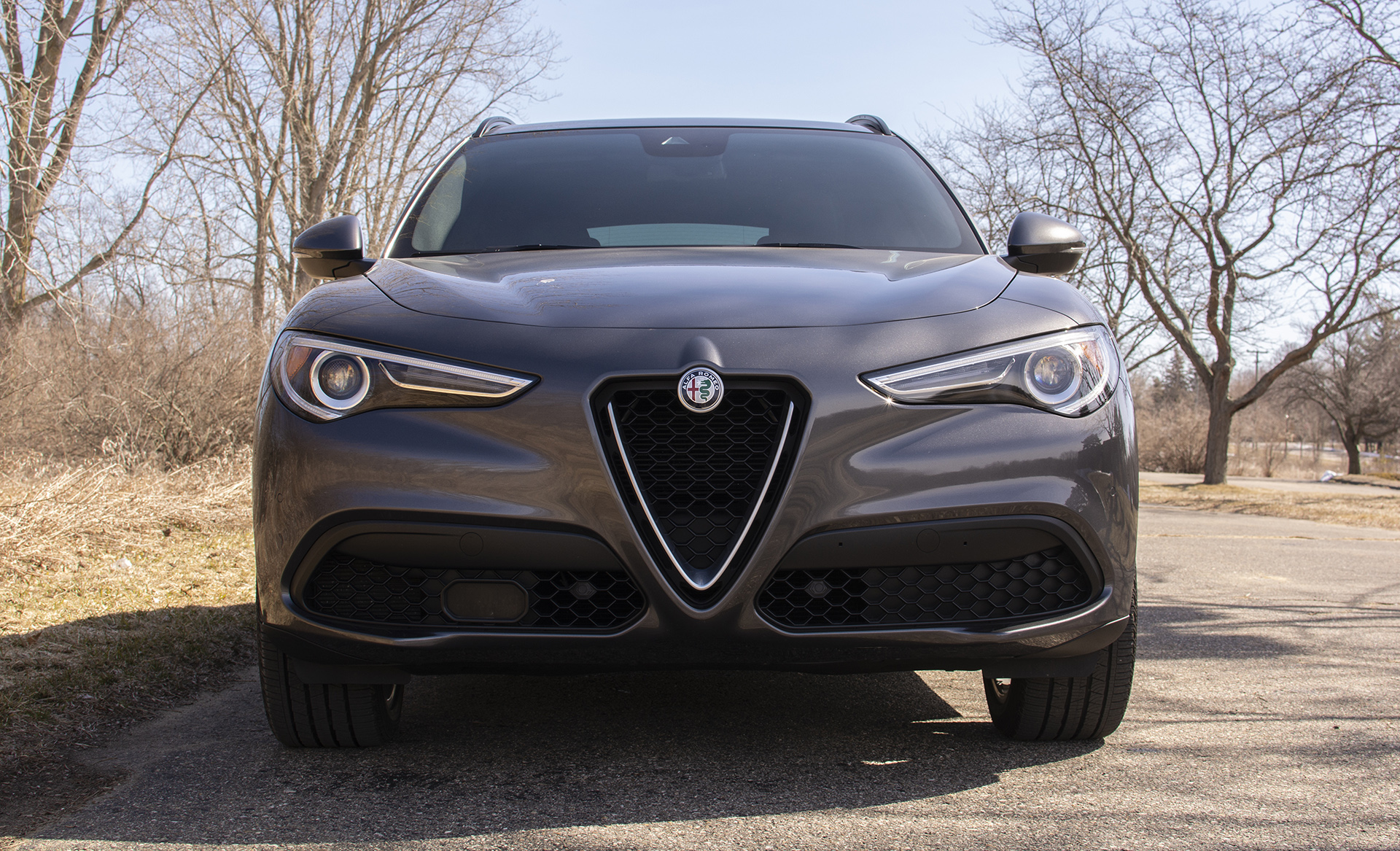 For most people, the Ti is the model to get, as it comes with a number of desirable features such as the larger infotainment system, heated seats and steering wheel, and six-way power adjustments for the front seats. 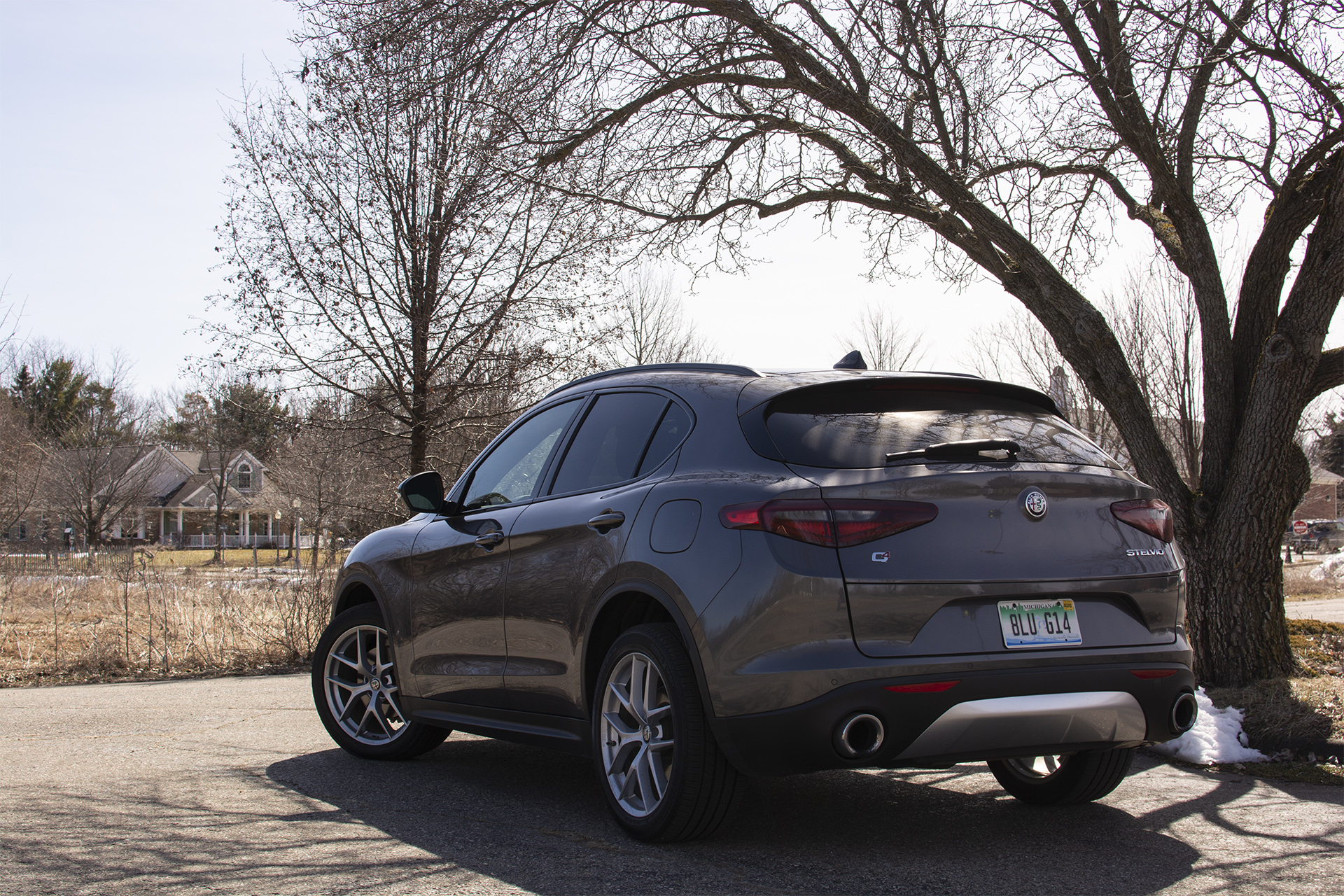 Buyers wanting a bit of sport injected into their crossover need to consider the Porsche Macan. Its wide range of engines offers excellent acceleration and handling, and is described by some as being close to an actual sports car. Its interior gives the Stelvio a run for its money, with top-notch materials used throughout, an easy-to-use infotainment system, and enough space for most backseat passengers. Where the Macan trails the Stelvio is in fuel economy and a small cargo area.

If you want something with a touch of luxury, then look at the Volvo XC60. The model underwent an extensive redesign for the 2018 model year and it shows. The interior is one of the nicest places to sit, with a modern design, high-quality materials and very comfortable seats. A range of force-inducted four-cylinder engines provide excellent performance and efficiency. Ride quality is very smooth with bumps becoming nonexistent. Be aware the infotainment system will take some time to learn due to a slightly complex menu layout.

Trying to sum up the Alfa Romeo Stelvio is a bit difficult. There are parts of the vehicle that are quite brilliant and others that relegate it to the back of the pack. This is before even considering Alfa Romeo's questionable reliability history that will put a number of people off.

But to some, the charm of an Alfa Romeo vehicle is the moments of brilliance buried under all of the issues and problems. For others, that's very much a turn-off.

If you're considering a Stelvio, be aware of what you're getting yourself into. It may mean the difference between being happy or disappointed with your decision.