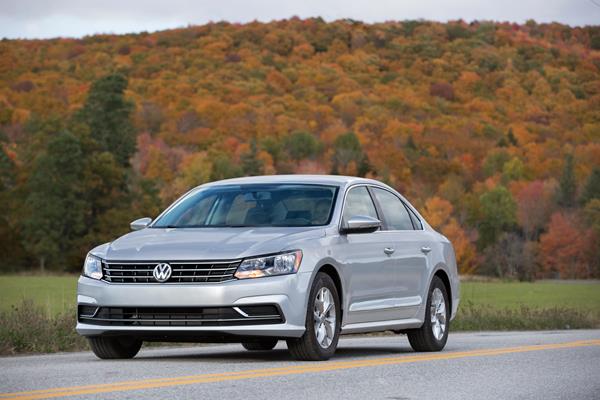 In the competitive midsize sedan segment, the 2017 Volkswagen Passat seems to be the quiet wallflower, often overlooked because of its unassuming style. But asking this sedan to dance might make some buyers wonder why they don't go to the VW slot on dealership row more often.

The 2017 Passat carries a simple style on its exterior and a lot of goodness on its interior, both hidden in decidedly bling-less attire. Flashy is not the VW way, but if the best sellers in the midsize segment have taught us anything, it's that pretty doesn't always sell in this market.

What the Passat has is a full coverage of the basics. The boxes for most midsize sedan buyers include a roomy interior, a good highway ride, smart (and achievable) fuel economy and quality workmanship. The VW Passat ticks off these boxes, though it doesn't lead the pack in any of them. What's most compelling is how these things are mixed and presented.

New for 2017 is the discontinuation of the SEL trim and a subsequent shuffling of content as a result. This adds value to the mid-level trims and the SEL Premium (which remains). There is otherwise no other change to be found between the 2016 model year's refresh and the 2017 Passat.


What We Love About the 2017 Volkswagen Passat:


What We Don't Love About the 2017 Volkswagen Passat: 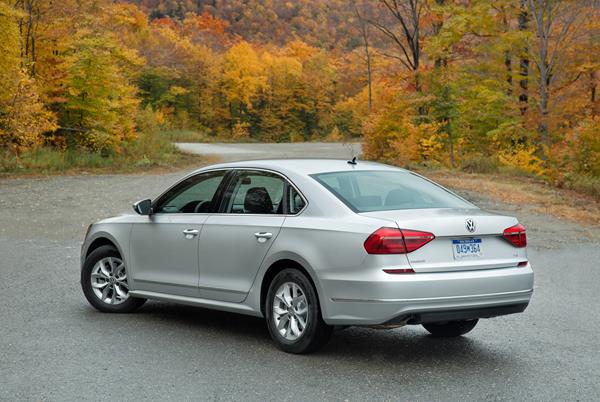 Nothing about the 2017 Passat's exterior jumps out as being particularly standout or eye-grabbing, but its timeless look is pretty classy compared with the gimmicks often used by others in the midsize class to gain attention. The design for the Passat is about six years old now, though updates last year did add some flair. Unlike many, the VW Passat's look is clear and simple. It may not turn heads at a car show, but it will look contemporary for years.

The 2017 Passat's simple lines are straight and long. The front fascia is thin, with a good balance of grille and lighting that flows upward into a lightly curved hood beset with straight ridges along either edge. Those create the beginnings of the light fender swells at front, which are finished with a line that begins above the headlamps and move along the bodywork all the way to the rear tail lamps to make the beltline. On the body below that is an indent and line to make the impression of a running board. A bone line down the center of the doors, just below the handles, accents both of the other lines for a simple but elegant body.

The 2017 Volkswagen Passat's roofline is the simplest of sedan styles. The windscreen is not as raked as many, flowing upward in a more sedate manner then flattening slightly at the roof toward the rear quarter before dipping down again. That line then angles back, nearly straight, for the deck lid to make a substantial-appearing trunk.

Tires and wheels are forward-facing, with a short overhang at the front of the Passat and a long one to the rear. This both gives an impression of power and moves the wheelbase to put the driver at the center, improving ride comfort. A classic move that isn't often accented in today's sedan designs. 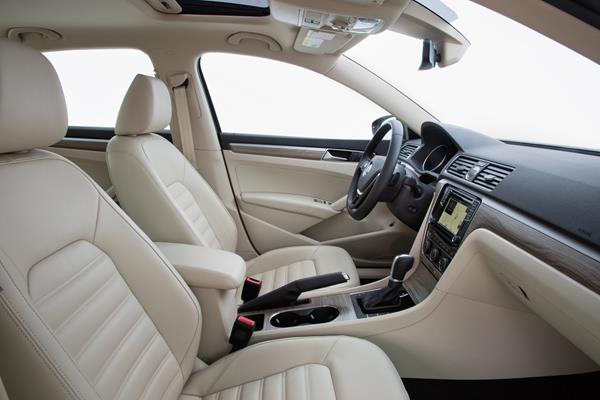 Volkswagen is not well known for high-end interior design or materials quality. Despite that, the 2017 Passat is much more upscale than other VWs. The interior of the Passat is still Teutonic in is simplicity and reservations against bling, but the layout and materials quality are all very good. So once your initial "blah" after comparing the Passat's interior to its rivals, it grows on you quickly as a no-nonsense relief.

Front seating is very comfortable and adjustable, with plenty of legroom and headroom for even the big and tall. The 2017 Passat's seats are well bolstered, but not intrusive. The driver's controls are logical and quick to understand, though some VW quirks such as the cruise control on the lighting dongle require some time to learn.

Rear seating in the Passat is well ahead of most midsize sedan rivals, with more room offered than almost any other sedan that can be named. Legroom is particularly good and is more akin to a full-size sedan in its generosity, as is headroom in the rear of the Passat. The relatively wide doors and big seats also make getting children in and out of car seats much easier on your back.

Trunk space in the 2017 VW Passat is above par at 15.9 cubic feet, and its large opening with a small lip makes loading and unloading easier. The back seats are a 60/40 fold as standard, so getting larger items into the Passat is simple.

One of the greatest blights of the 2017 Passat is infotainment. Here it lags behind rivals in both screen size and resolution. Functionality is good, though not necessarily groundbreaking. In most ways, the Passat's infotainment is fairly outdated, but it's easy to learn to use. The addition of Apple CarPlay and Android Auto are a boon in that regard.

The base infotainment screen is a tiny little thing that offers Bluetooth connections and not much else. Upgrading to the top-end screen only gets you a 6.3-inch touchscreen, but that adds a lot of function for the price. Although the user interace is somewhat clunky in comparison to more tablet-like rivals on the market, the Passat's higher-end infotainment is usable and smartphone integral. 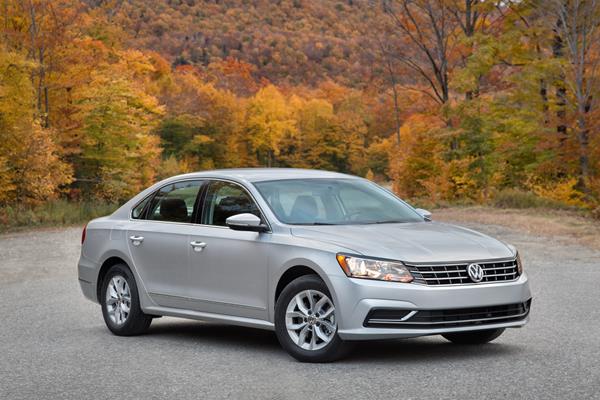 There are two engines for the 2017 VW Passat. The 4-cylinder engine is EPA-rated at 27 mpg combined, with 23 mpg in the city and 34 mpg on the highway. That's a bit lower than other 4-cylinder offerings in the segment, but the Passat has a bit more power from its non-turbo than others might. In the real world we found that the 4-cylinder Passat was not under-powered or sluggish at all, and it delivered the expected fuel economy almost exactly.

The 6-cylinder option for the 2017 Passat is EPA-rated at 23 mpg combined, with 20 mpg city and 28 mpg highway. This model, which we tested last year returned numbers on par with EPA expectations as well.

The 2017 Volkswagen Passat is rated as "About Average" by the J.D. Power and Associates Vehicle Dependability Study. One serious recall for a brake issue is also affecting our scoring here, but because JD Power upgraded the Passat's ranking and Consumer Reports has left it unchanged, we feel compelled to upgrade the scoring here a bit as well.

The 2017 Passat is top shelf in safety. The National Highway Traffic Safety Administration (NHTSA) ranks it with a 5-Star overall rating, the best score available. The Insurance Institute for Highway Safety (IIHS) gives the Passat a Top Safety Pick status with perfect "Good" scores across teh board in crash tests.

We note that the 2017 Passat was elibible to be named a "Top Safety Pick+" but did not make that due to changes in how the IIHS scores advanced safety features. 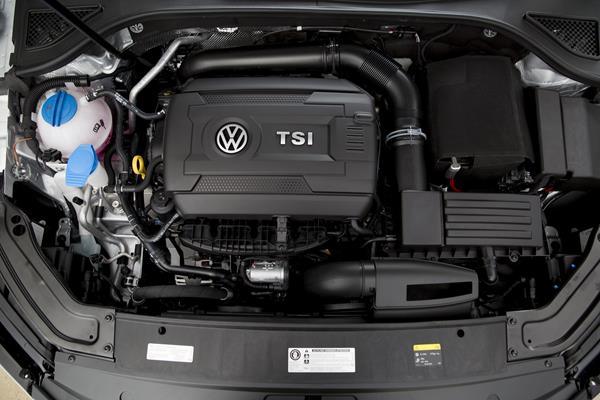 The Passat has two engine choices and two different (but similar) transmissions, and is always front-wheel drive. The base engine for all trim levels is a 1.8-liter 4-cylinder that outputs 170 horsepower and 184 foot pounds through a 6-speed automatic transmission. Acceleration is better than most 4-cylinder-powered midsize sedans in this class with 0 to 60 mph times of about 8 seconds being easy to accomplish.

The upgrade engine is a 3.6-liter V6, available in the SE and SEL Premium trims, that outputs 280 hp and 258 lb-ft into a 6-speed dual-clutch automatic (DSG) transmission. This engine shaves about two seconds off of the 4-cylinder's 0 to 60 time and has a broader band of power delivery thanks to those two extra cylinders.

On the road, with either engine, the 2017 VW Passat is a smooth drive with a quiet interior and confident demeanor. The 4-cylinder engine does well in the city with punchy-feeling performance. The bigger V6 gives a smoother push and drive that many will appreciate.

On the highway the Passat is very well-mannered and passes and merges well with either engine. Those used to more performance-oriented German cars will find the 2017 Passat to be more cushy than they'd like and less astute in the curves when pressed. Still, this is a likable car that ticks most of the boxes a midsize buyer is likely to have.

The base model 2017 Volkswagen Passat is well-priced for the segment and is on par with most of the competition, but few buyers look at base models in the real world. In mid-level packaging, with the 1.8L 4-cylinder, the Passat has a lot going for it. Priced around $25k at mid-point, the 2017 Passat is compelling and just a few thousand more adds in some great technology and safety options.

Jumping to the V6, things get less value-oriented. VW did add the V6 to the SE trim, letting buyers get into the V6 for under $30,000. But just so. The SEL Premium is still the better bet if a V6 is a must.

Most should find that the competent 4-cylinder in the 2017 Passat covers all bases and can stick with that. Buyers should note that resale values for new-generation Passats have been low thanks to the bad reputation the previous generation Passat gave the model. That will take time to remedy. 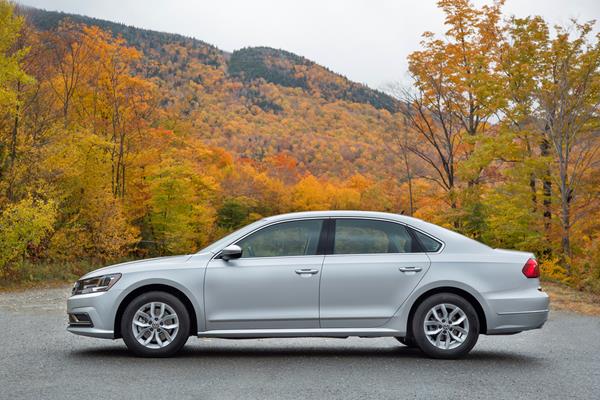 The midsize sedan category is the best-selling category in the United States and the 2017 Volkswagen Passat has a lot of competition because of that. The best-seller is the Toyota Camry, which offers reliability and ergonomics. The Nissan Altima also bests the VW in those regards, but isn't as interesting to drive.

For those looking for more sport in their midsize sedan, without losing versatility, the Mazda Mazda6 is an excellent option. Value is best found in the Hyundai Sonata and Kia Optima, while style is a high point of the Ford Fusion and Chevrolet Malibu. Among all of this competition, the Volkswagen Passat is middle of the road in most respects, but delivers everything midsize buyers are likely looking for.

Because of its nice hit at the center of things, we think the 2017 Volkswagen Passat is worth comparing to the leaders of the midsize pack when shopping. Many might find the good pricing and timeless style of the Passat to be what they really want.