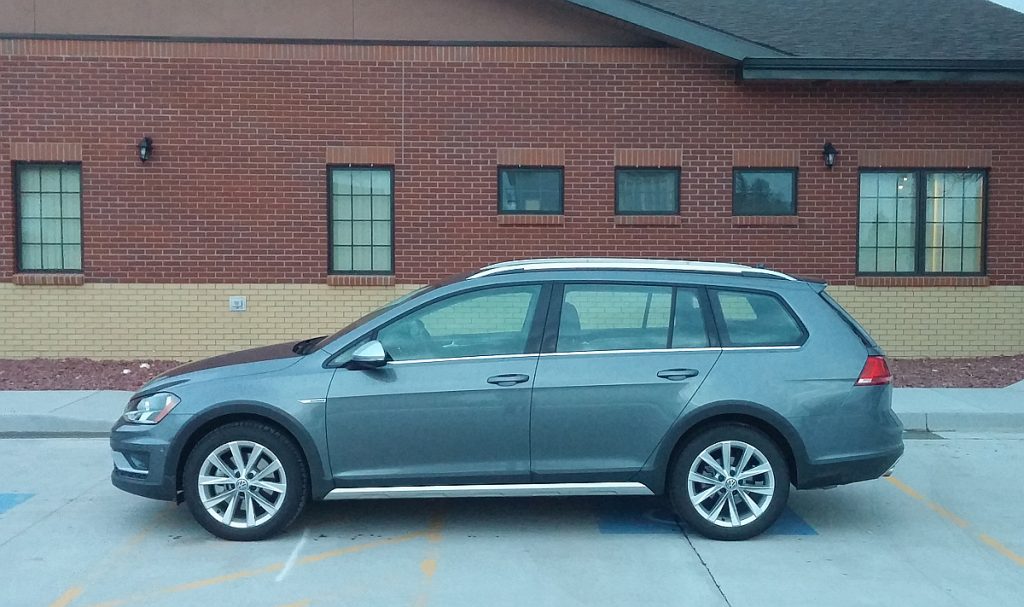 The world is ever-changing and in automotive, sometimes the surprise comes when the norm is rejected and a new rise in popularity comes. So it is with station wagons, which are making a comeback of sorts. The all-new 2017 Volkswagen Golf Alltrack is heralding that idea, running in to meet perennial favorites and offer a more premium option to the Golf SportWagen.

The Golf Alltrack is compelling thanks to its cost-consciousness (considering amenities) and extreme versatility. It has a bit more ground clearance than a standard Golf or SportWagen model, has all-wheel drive as standard and 66.5 cubic feet of cargo space - roughly equivalent to most compact crossovers.

On the road the Alltrack is smooth and competent, and off the road it's capable of any light-duty task you ask of it. For family hauling, daily driving and weekend adventuring, the Golf Alltrack is definitely a good option for today's buyer.


What We Love About the 2017 Volkswagen Golf Alltrack:


What We Don't Love About the 2017 Volkswagen Golf Alltrack: 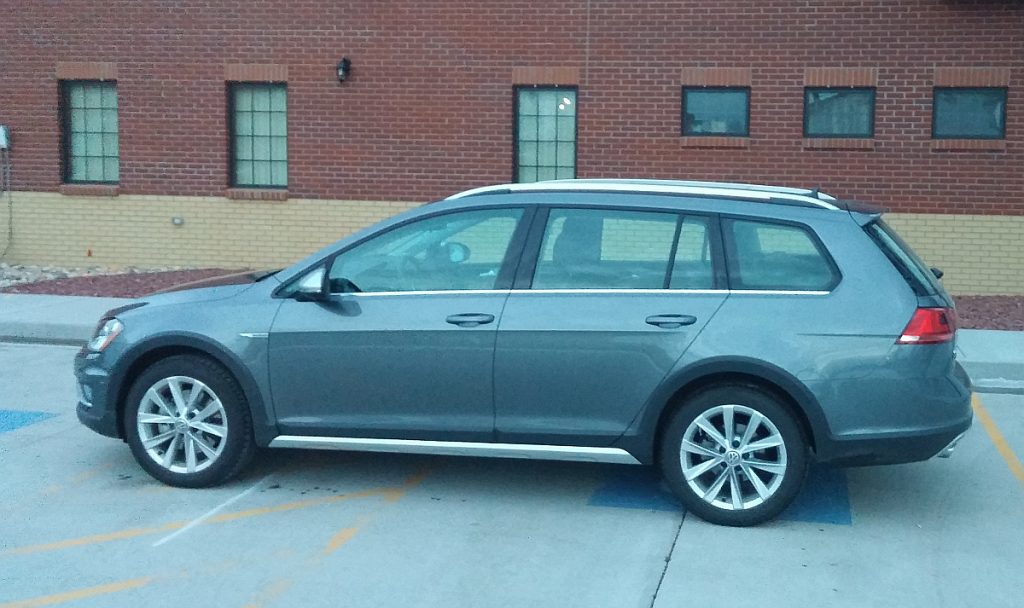 The 2017 Golf Alltrack looks similar to a Golf Sportwagen, but closer inspection shows some major differences. The most obvious is the higher ground clearance of the Alltrack, which is close to 8 inches, and the more robust edge plating on the approach lip and side edges. Slight changes to the hoodline, roof racks and rear quarter are also noted.

The Alltrack is a much more robust and off-pavement ready version of the Golf Sportwagen. The lines flow in classic Volkswagen station wagon styling, flowing up to a tall front seating area roofline and then tapering a bit towards the rear before terminating at the hatch. The beltline and lower greenhouse are parallel to the ground, keeping the sporty feel of the Golf lineup. Large wheels and reinforced wheel wells complete the look and add a capable-appearing nature to the car.

We like the revised front-end styling on the 2017 Volkswagen Golf Alltrack, which has more refinement when compared to the other Golfs. The tiny Alltrack badges on the front fenders and the optional chromed side mirrors (to match the lower trim guards) are a nice touch as well.

The interior of the 2017 Volkswagen Golf Alltrack is well-designed with a simple but effective appeal. Even at the base level, the Alltrack's materials quality and feel are more upscale than the Sportwagen and other Golf models. The simplistic design creates an airy atmosphere that matches the large windscreen and side window openings.

The front seating area and dashboard are well done. The Golf Alltrack's controls placement are easy to get to and intuitive. Although the touchscreen infotainment seems small, it's about right in proportion to the size of the car's interior. We're also fans of the nicely-bolstered but not too controlling seating and flat-bottomed steering wheel. Entry and egress are easy thanks to the wide-opening, near-90-degree swing of the front doors.

The second row seats are a down point, being smaller in shoulder and knee room than some similarly-priced competitors. This comes because of the relatively thin, small build of the Golf on which the Alltrack is based. That's exacerbated by the narrow door openings at the rear.

What we do like about the 2017 Alltrack is its excellent visibility in all directions and the unusually high quality of workmanship that went into the car's construction. Storage cubbies and smart ideas like the integrated phone carrier ahead of the shifter are genius. Cargo space is another high point.

30.4 cubic feet of cargo space is found in the Golf Alltrack with the rear seats up. Fold them down and it expands to 66.5 cubic feet. That rivals many much larger crossovers. For added convenience, the rear seats can be folded with a simple lever pull from the rear hatch.

Screen graphics are crisp, but small and outdated. They are relatively low resolution when compared with others on the market. Apple CarPlay and Android Auto are included, and do improve things a bit.

Some driver's aids are also available for the Alltrack, including assisted parallel parking, blind-spot monitoring, etc. These are well-executed.

The predicted EPA-estimated MPG for the 2017 Volkswagen Golf Alltrack is pretty good at 22 mpg in the city and 30 mpg on the highway for 25 mpg combined. In the real world, we held about 24 mpg combined in mixed driving with the automatic transmission. The manual transmission option lowers fuel economy by a point on both highway and combined MPG.

The 2017 Alltrack is considered to be "About Average" in expected reliability, according to the J.D. Power and Associates Vehicles Dependability Study. This is in line with the Golf Sportwagen and the Golf series itself. With the Alltrack being new, we can only use these as our estimates for reliability. 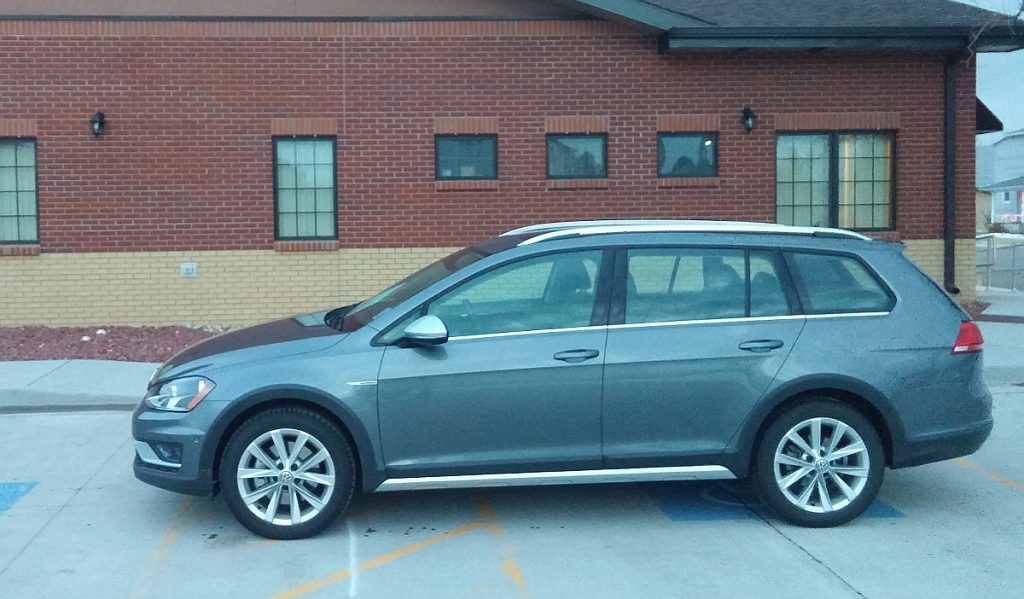 The National Highway Traffic Safety Administration rates the 2017 Golf Alltrack with a 5-Star overall crash test rating. The car has also received a Top Safety Pick status from the Insurance Institute for Highway Safety. In both cases, the 2017 Volkswagen Golf Alltrack is excellent and rates a high score.

In most respects, the 2017 Volkswagen Alltrack is a great vehicle to drive. The turbocharged 1.8-liter 4-cylinder engine outputs 170 horsepower and 199 pound-feet of torque. A 6-speed dual-clutch automatic transmission is standard and a 6-speed manual transmission is available on all but the highest trim level. All-wheel drive is mandatory.

The Alltrack is smooth on acceleration and does well on the road, both around town and on the highway. It's not a fast car by any means, but it will get you there without feeling sluggish about it. Responsiveness is largely thanks to relatively tight steering and good engagement through the wheel. The dual-clutch transmission is particularly adept at keeping up with the driving situation at any speed, so long as the engine is at a good output rage (over 2,000 rpm).

Off the road the 2017 Alltrack is capable of most common tasks where the pavement has ended. This Volkswagen is not a rock climber or mud mucker, but it is definitely able to get through the questionable pathways to the lake or down the road through the snow.

The 2017 Volkswagen Golf Alltrack is a well-priced vehicle at its entry level and mid-point trims. Its upper-level trim may appeal to some buyers, but those shoppers might also want to look at the other end of the VW lot at the Audi Allroad as a similarly-equipped alternative.

Compared with others on the market, the Alltrack will likely hold its own in terms of price to ownership, but VW does not have a good history of value retention for trade-in or sale.

The most obvious competitor to the 2017 Volkswagen Golf Alltrack is the Subaru Outback, which is an excellent vehicle. On every front but its price tag, the Subaru is better than the Alltrack, but the VW does have the price advantage. VW's luxury brand, Audi, has the Allroad, which is also very similar to the upper-trim version of the Alltrack and worth cross shopping. Similarly, the base model Alltrack, which better equipped than the Golf SportWagen, is also more expensive. Base-level buyers might look towards that model as a lower-cost option.

In all, we really enjoyed the 2017 Golf Alltrack and think it's a great new entry into the all-wheel drive station wagon segment. It fits into many lifestyles, offering a non-SUV option for get-anywhere needs and everyday family use. The Alltrack is versatile, family-friendly and well-equipped.