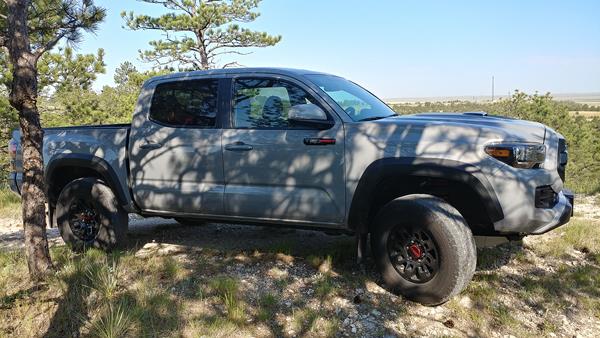 The 2017 Toyota Tacoma continues with the pickup truck's full redesign for the 2016 model year. Changes for 2017 are minimal, with only the addition of a power rear-sliding window option as new. The TRD Pro packaging returns after a year's hiatus, bringing back the off-pavement-monster model option for the Tacoma.

Most of the 2017 Tacoma's appeal comes from its new look and powerful history. The Tacoma has long been a best-seller in the midsize pickup truck segment, for a variety of reasons. Currently, the main reason may be because it's the newest and best overall value offering in the truly midsize segment. The excellent and unmatched TRD Pro package may also be part of it this year.

The 2017 Toyota Tacoma is a strong, capable, versatile and comfortable small truck for those who need what a midsize pickup can offer. It's capable of being both a workhorse and a toy. Exactly what midsize pickup buyers want. 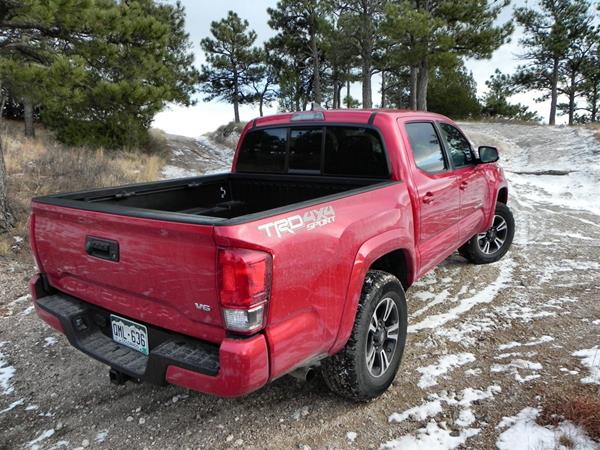 The Toyota Tacoma was revamped for the 2016 model year with a lot of interest from the automotive media. The redesign of the truck gave it a more robust look and several updates to its overall build. One noticeable difference is the taller stance and heavier front end of the newer Tacoma.

The 2017 Tacoma remains a midsize (small) pickup truck and doesn't upsize with this new design. Instead, focus is on the look and capability of the Tacoma. The front grille is larger and pushed out so it becomes more pronounced. Headlamps are a bit smaller to enhance the size of the fenders behind them. This change gives the front portion of the Tacoma a stronger presence than it had before and the flat hood above finishes that emphasis.

From the side, some of that design backfires as the Tacoma now has a larger front overhang and a kind of overbite to it. It's much like a chinless profile and we think it detracts from the otherwise robust nature of the Tacoma.

The bodywork and bed of the 2017 Toyota Tacoma are all business, with a strong look that appeals to a viewer's get-it-done nature. Emphasized rear fenders, lots of space between tire and the wheel well (even on 4x2 models), and a flat-roofed, squared cabin let us know that the Tacoma is ready for business and has plenty of room inside for those doing it.

The 2017 Tacoma's interior is well laid out, with a design that bespeaks both quality and durability. There are a few places of concern, but for the most part the Tacoma remains the roomiest of the truly midsize pickup trucks.

The driver and front passenger are treated to plenty of legroom and headroom. The driver may find that the seating position is a bit awkward, as it is more akin to a car than to a truck or SUV. The driver's legs are kept straighter (and thus longer), minimizing the ability to grip the steering wheel on rough terrain and creating a rather odd feeling given the truck's high stance. This becomes normal after some time, but is a bit weird regardless. Most trucks have higher seating to make up for a high floor, improving ground clearance and visibility in one shot. Toyota opted to keep the roofline lower and add headroom with lower seating, it seems. 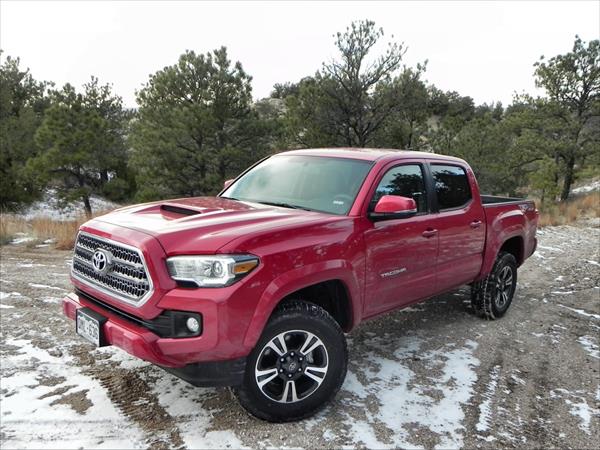 Getting in and out of the Tacoma is no worse or better than with any competitor. Its high stance means that most will have to climb up and in, then swivel down and out to exit. Grab handles and optional steps or bars can help with this.

In the rear seats, roominess is dependent on cab style. The crew cab is the largest and best choice if the back seats are to be used regularly. Three across can be sat relatively comfortably and two adults are more than comfortable otherwise. Legroom is a big iffy for taller folks, but not terrible.

Visibility in the 2017 Tacoma is very good and the addition of the sliding rear glass (electric) is a nice touch, but we note that it does cut down some rear view mirror visibility due to the sliding window's frame.

The 2017 Tacoma uses Toyota's latest Entune system for infotainment. This comes on a touchscreen that offers large virtual buttons that are easy to read and use, whether parked or on the go. We aren't fans of the user interface when going beyond simple station tuning and easy navigation, though. Integration with a smartphone is a bit clunky and there is no Apple CarPlay or Android Auto option. App integration is good, but depends on the smartphone connected being able to plug in and run the Entune app, which locks out other phone uses when in play. The fact that the USB jack it uses is the only one available in the truck doesn't help.

Flipping that coin, voice control in the 2017 Toyota Tacoma is very good, even on the base model. Our time with a base-level Sport model and a top-level TRD Pro model showed that infotainment, while limited with the base model, benefits from superb voice control for hands-free operation. 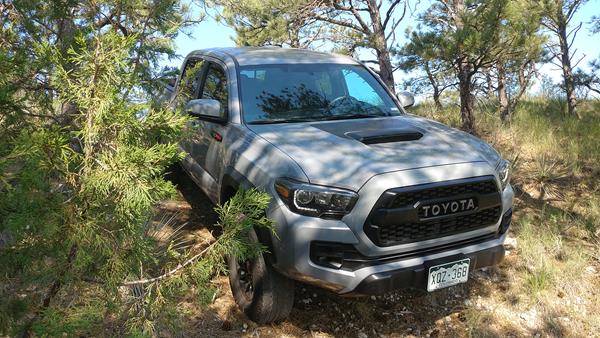 The Toyota brand as a whole enjoys a good reputation for reliability, but the 2017 Toyota Tacoma has not lived up to that reputation. The Tacoma has received an "About Average" score from the J.D. Power and Associates Vehicle Dependability Study and has been subject to two recalls for powertrain issues (one engine, one differential). These give us pause in rating the 2017 Tacoma very highly for reliability.

The 2017 Tacoma has received a four-star overall rating from the National Highway Traffic Safety Administration for crash test results, including four stars for frontal and rollover crash tests, and five stars for side crash tests.

The Insurance Institute for Highway Safety has released only two of its five crash test results for the 2017 Tacoma, both of which were best-possible "Good" scores (moderate overlap and side impact). The Tacoma does not have advanced active safety options like automatic braking and thus would not be eligible for the IIHS' "plus" rating. 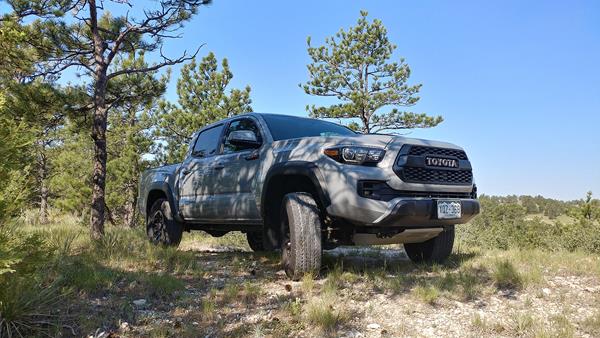 The 2017 Toyota Tacoma is powered by a 3.5-liter V6 that puts out a bit more muscle than its predecessor did, despite having a smaller displacement. The automatic transmission, however, is less performance-focused and takes away that extra power in many driving situations, opting instead to focus on fuel economy. As you can see above, that's not working out well for the truck.

On the road the Tacoma's acceleration is good most of the time, but when pressing for a pass or pulling a heavy trailer, the transmission is often reluctant to downshift to give that extra boost for the go. We note that a large improvement to the Tacoma's driveability comes thanks to a stiffer body that doesn't roll as much in the corners and better steering gives it a more sure-footed appeal when driving at all speeds.

What we love about the 2017 Tacoma is its off-road prowess. Especially in the returning TRD Pro package, with its plethora of pavement-hating goodies. Most 4x4 Tacoma models are competent in light and medium off-road use, but the TRD Pro adds better shocks, stiffer springs, a locking rear differential, crawl control and more. A must model have for any serious off-pavement junkie.

It's very unlikely that a buyer will find a sale price on a Tacoma. Toyota literally just can't build them fast enough to meet demand. Yet pricing for the 2017 Tacoma models is not terribly out of whack with the market, so value is all about the resale and versatility of the truck.

Most buyers of a 2017 Toyota Tacoma are likely to hit the mid-range $28,000 to $30,000 price point in their purchase. For that, the Tacoma will come well-fitted and have plenty of versatility for the buck. Resale values for Toyota products, especially trucks, are higher than the already-high norm for the pickup truck segment. So Tacoma owners can expect less depreciation over time than some competitors.

All together we consider these to be good points for the Tacoma buyer's bottom line. The tough part will be price and availability at the sales point, and buyers may have to order and wait or shop around to find the model they want. 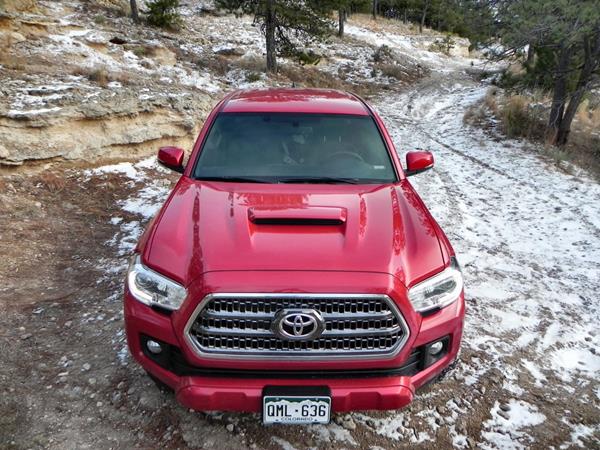 The 2017 Toyota Tacoma remains a best-seller in the midsize truck segment, but that may not necessarily be due to extreme excellence on the Tacoma's part. The very aged Nissan Frontier, which is usually second in sales, is long overdue for a redesign and will likely see one very soon. The Chevrolet Colorado and GMC Canyon are much larger trucks, despite their midsize categorization, compared to the Tacoma and Frontier and are pricier in the main as well.

The 2017 Tacoma sets benchmarks that others in the segment have yet to meet. The very capable Frontier Pro-4X model, for example, is comparable to any upper-crust Tacoma 4x4, but has nothing close to the off-road prowess of the Tacoma's TRD Pro package. The Tacoma's base package is also a compelling buy for fleets and small business owners for its usefulness and low cost. So the 2017 Toyota Tacoma remains a good choice for small pickup buyers, regardless of need.