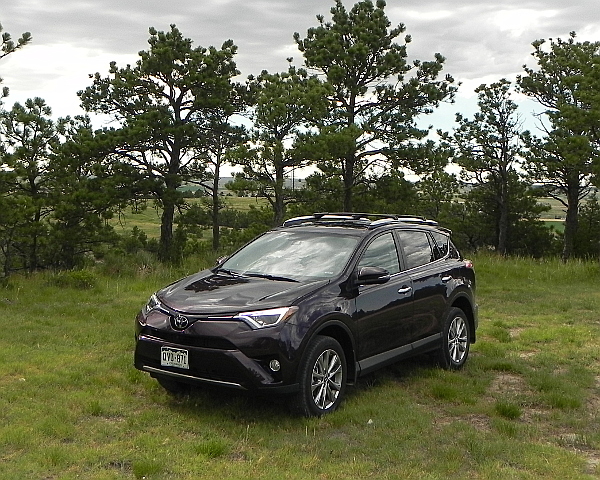 The 2017 Toyota RAV4 is virtually unchanged from the 2016 model year, when the crossover received a refresh with styling upgrades. The RAV4 remains a nice-selling crossover in the compact segment with sales numbers on the rise. Those attracted to the RAV4's unusually strong looks when compared with other Toyota models will find a well-rounded, value-oriented little crossover lies underneath that eye-catching skin.

That said, shoppers should keep competing crossovers in mind while evaluating the 2017 RAV4 because the compact segment is very hot and full of excellent contenders. There are sportier, more fuel efficient and classier options available in this segment compared to the RAV4. Buyers who know what they want will definitely find it in the compact crossover arena.

Yet the 2017 Toyota RAV4 is still a compelling offering. With (actual) seating for five adults, a generous cargo area and the hybrid option, there are a lot of reasons to look at the Toyota that helped found this compact segment. 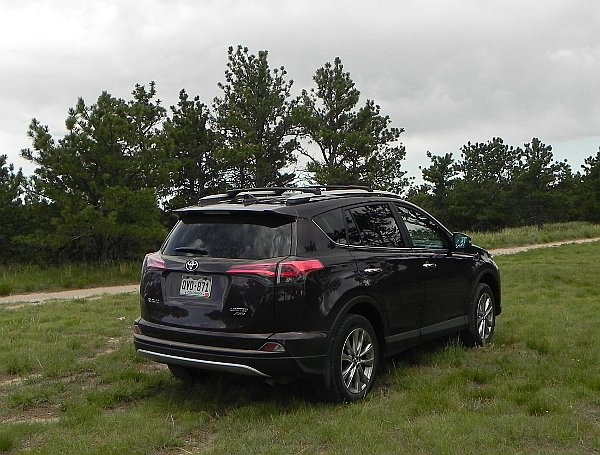 The 2017 Toyota RAV4 carries the updates made to the crossover last year, which refreshed the styling somewhat. Most of those changes were to the front and rear fascias, which became less blocky and more smooth without losing the RAV4's overall personality.

The Toyota RAV4 in this current generation is marked for its more "Here I am!" style with a strong fascial cut, short hood and heavy body lines accented by the shelf-like beltline marker across the doors and rear fenders. It's a style that may put some off, but that seems to resonate with many buyers in the RAV4's target markets.

The 2017 RAV4 is definitely sporty and this model is now one of the more stand-out Toyotas on the market. That says a lot given that Toyota's general styling trend for decades has been to stay in the middle of the road and not rock anyone's boat.

If there is anything throwback about the Toyota RAV4 in this current generation, it's its interior. Inside, the RAV4 is modern but still seems to cling to some of the crossover's older modes of thinking in terms of layout and materials. There are definitely classier competitors on the market, but the nostalgic appeal of the RAV4 isn't to its discredit. 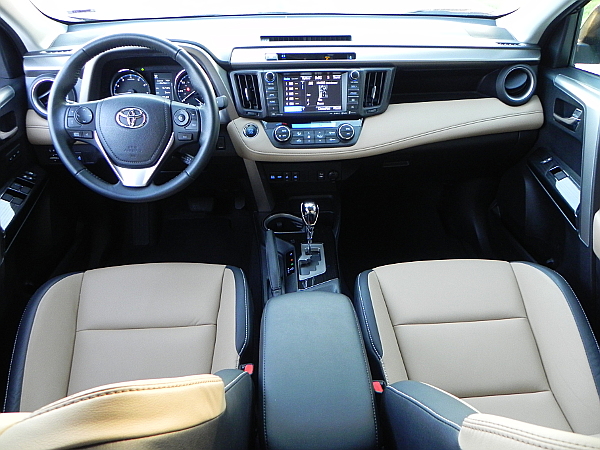 Materials quality is generally good, though there are some flat, hard plastics to be found on the dash and rear doors. Roominess is a big focus in the 2017 Toyota RAV4 and that definitely appeals to buyers. Not only is the interior of the RAV4 one of the roomiest in the segment, it's also airy and open-feeling to those inside.

Seating in the 2017 RAV4 is good and accommodating, even in the rear. Five adults can actually fit inside the RAV4, provided none are unusually large in girth or stature. It's unusual for a compact crossover to have an adult-usable three-passenger rear seat. Seating in the base model is good and it only gets better as the trim levels go up. We also like the storage shelf along the dashboard and the myriad of plug-ins available throughout the cabin in the upper trims. Sadly, drink holder placement puts beverages at odds with the shifter and arm rest placement.

We like the controls layout in the 2017 RAV4, with a few Toyota-specific exceptions such as the somewhat odd cruise control dongle below the steering wheel and the over-large and sometimes delicate-feeling knobs on the climate and stereo controls.

Cargo space in the 2017 RAV4 is very good, returning some excellent numbers on paper. There are 38.4 cubic feet behind the rear seats and 73.4 with those seats folded. We note that the rear seats do not fold entirely flat and the loading floor can be somewhat high compared to some competitors. We also would like to see more cargo configuration/organization options within the RAV4, given the segment that it's in.

The lack of a third row option may also mean that the RAV4 is not capable enough for some buyers. The RAV4 is now one of the quieter crossovers in the compact class when out on the highway. 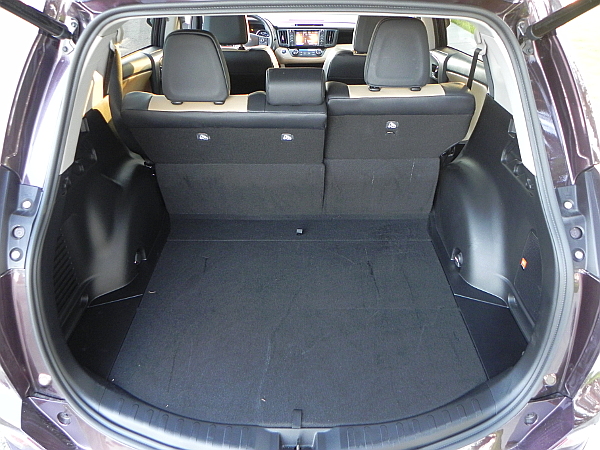 The 2017 RAV4 is imbued with Toyota's Entune infotainment system. This is a good system with a relatively easy-to-learn interface, but it's behind the curve in terms of graphics clarity and capability. The base offering in the RAV4 includes a 6.1-inch touchscreen and only one USB port, but the voice recognition is top shelf and Bluetooth connectivity is relatively easy to make.

The upgraded system uses a larger 7-inch touchscreen with a lot more functionality, including Siri Eyes Free, an available 360-degree backup/parking camera and apps integration such as Facebook Places and Yelp. We like this setup, except screen quality is not as good as it could be and the screen's placement in the RAV4 can mean glare when driving during the height of the day.

Also integrated into the 2017 RAV4 is a driver's information display in the center of the instrument cluster. With the upgrade to the larger infotainment screen comes an upgrade to that information screen as well. This allows navigation prompts and other information to be shown to the driver front-and-center for better safety on the road.

The 2017 Toyota RAV4 has one engine and transmission available with either front-wheel or all-wheel drive. The FWD version of the RAV4 is EPA-rated at 23 mpg in the city and 30 mpg on the highway and the AWD is rated at 22 city and 28 highway. These are good, but not stellar fuel economy numbers for the compact crossover segment.

In the real world, the AWD RAV4 returned lower MPG results than those listed by the EPA. A week of driving in the gasoline-powered RAV4 AWD returned only 19 mpg overall. 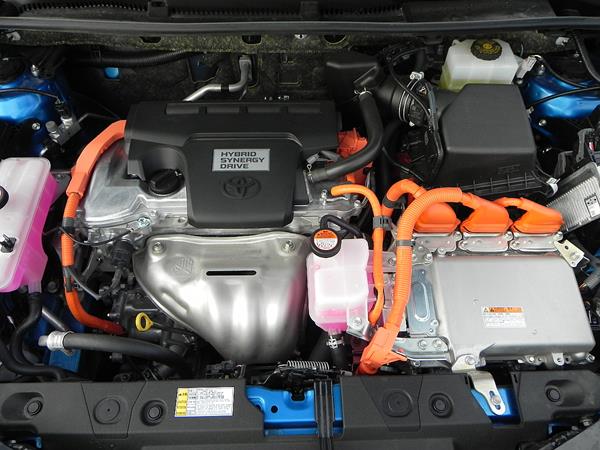 A RAV4 Hybrid model is also available, utilizing a unique AWD drivetrain that combines an electric motor with a gasoline engine. This configuration is EPA-rated at 34 mpg in the city and 30 mpg on the highway. Our real world findings in this model were similar to those numbers at 31 mpg overall with a lot of highway driving in the mix.

The 2017 Toyota RAV4 has a good reliability expectation, in line with the reputation held by Toyota as a brand overall. The 2017 RAV4 has received a "Better Than Most" rating from J.D. Power and Associates in their Vehicle Dependability Study. In addition, there have been no recalls issued for the RAV4 as of this writing. The warranty for the RAV4 is average for the segment at three years, 36k miles bumper to bumper.

Those concerned about safety will be interested to know that the 2017 Toyota RAV4 now includes Toyota Safety Sense technologies as standard. These include a pre-collision alert system with pedestrian detection, a lane departure warning system, automatic high beams and adaptive cruise control.

Those and improvements to the RAV4's framing have meant that the vehicle is now one of the safest vehicles on the road. The National Highway Traffic Safety Administration (NHTSA) has rated the 2017 RAV4 with a best 5-Star overall rating, with four stars for frontal and rollover results and five stars for side impact testing.

The Insurance Institute for Highway Safety (IIHS) has given the 2017 RAV4 an overall Top Safety Pick Plus rating with best-available results of "Good" on all crash tests as well as good results on advanced safety measures such as crash mitigation. 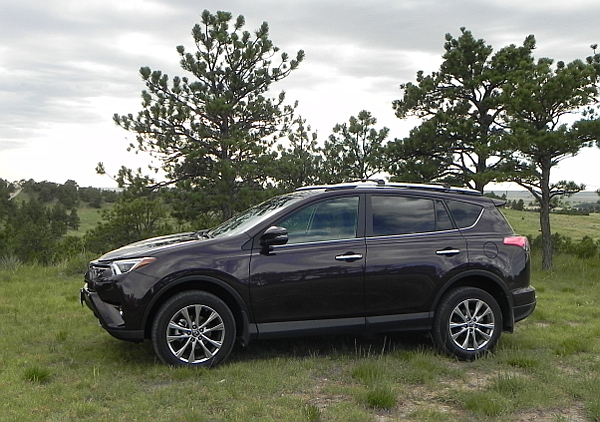 Performance is not the 2017 RAV4's strong suit, being more attuned for fuel economy. The RAV4 is powered by a 2.5-liter 4-cylinder engine that outputs 176 horsepower through a 6-speed automatic transmission. Front-wheel drive is standard and all-wheel drive is optional.

This engine produces adequate, but not confident propulsion for the RAV4 and has a somewhat sluggish feel when pushing along at highway and freeway speeds. The transmission is hesitant to downshift for more power delivery and can be noisy when pulling up a hill or accelerating to make the pass. On the flip side, the RAV4 is one of the quieter crossovers in this segment when driving along at highway speeds.

Around town the 2017 RAV4 is well mannered and easy to drive. Maneuverability and visibility are excellent and the RAV4 has a good, peppy feel out of the light or through the parking lot. Cornering is also good in the RAV4 compared with previous generations and many other crossovers in this class.

Similarly, the RAV4 Hybrid model has good acceleration and feel, but still struggles at highway speeds. Noise from the transmission is lower.

Off the road, the 2017 Toyota RAV4 is capable enough in most light-duty situations along dirt roads and access paths. In this regard, the RAV4 is one of the better in this segment.

The baseline 2017 RAV4 is significantly more expensive than its peers, but often has more accouterments included. Most buyers are more likely to be in the middle tier with the SE models, which are priced at about $30k when well-equipped.

We recommend the front-wheel drive models for most buyers, which offers a lower price point and good traction and capability in all but the most severe weather. The AWD model is best left to those living in very inclement geographic areas. The Hybrid model is good for those driving mainly around town and is not recommended for those doing a lot of highway driving.

The 2017 RAV4 is continuing with the sales growth the model held during the 2016 model year and thus may not be as incentivized for sale this year as it was last year. 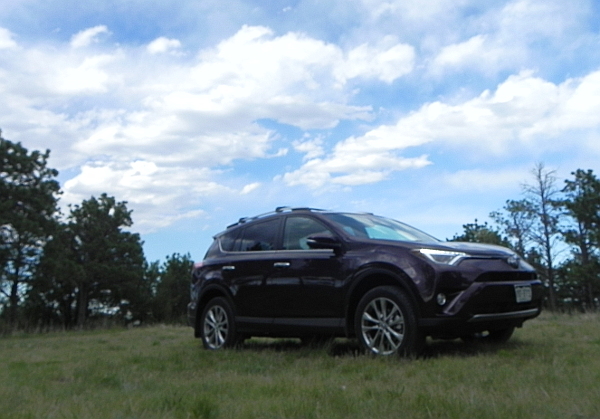 The 2017 Toyota RAV4 has a high score in our testing, but is in a segment full of high-scoring, excellent competitors. We recommend cross-shopping against the sporty and very ergonomic Mazda CX-5, the well-priced and capable Hyundai Tucson, and the very well-rounded Ford Escape. Also worth note is the family-friendly Nissan Rogue. Several of these competitors offer an optional third row of seating and most are competitively priced and fuel efficient as well.

There are good reasons to consider the 2017 RAV4, of course, and those include its high reliability expectation, excellent safety record, and eye-catching exterior. The RAV4 has a lot going for it and should definitely be on anyone's shopping list when looking in the compact crossover segment.