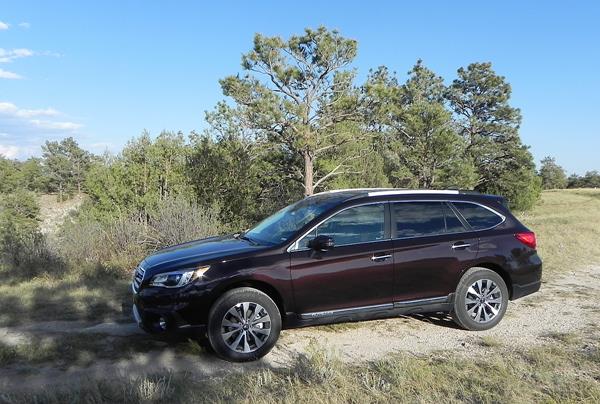 The Subaru Outback is well-known as a vehicle and has a solid fan base of buyers. Subaru's smart marketing strategies have held this car in high esteem, and its reputation for reliability and go-anywhere capability are set in cement. For the 2017 model year, the Outback sees only a few upgrades, including a new top-shelf Touring trim level.

The 2017 Subaru Outback is a 5-seat crossover-wagon with well over 8 inches of ground clearance, a reputation for ruggedness and a high resale value down the line. Although the Outback has few direct rivals, it is most often compared with small and compact crossovers. Unlike most of them, the Outback is more car-like in its drive dynamic and has the interior benefits of a midsize sedan, including one of the most adult-friendly back seats you'll find anywhere.

The 2017 Outback has three trim levels with two engine options each.


What We Loved About the 2017 Subaru Outback


What We Didn't Love About the 2017 Subaru Outback 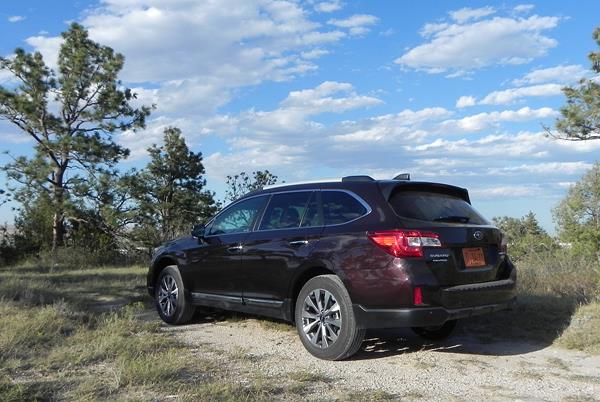 The Outback is unique in its appeal. It's neither station wagon nor crossover, but somewhere in between. For the 2017 model year, the Outback doesn't see much change to its exterior from 2016, retaining the unmistakable look of the crossover-wagon.

The 2017 Subaru Outback features a small grille, a long saloon-style hood, low roofline and sporty rear hatch. Body panels are accented with a wide beltline that rises slightly and a rugged-looking lower kickplate that accentuates the high ground clearance the Outback sports.

The Outback has a singular look that isn't matched by anything else on the road. For 2017, the new Touring trim carries darker trim points and exclusive alloy wheels. It's also set apart by its lower roof rails that lack crossbars.

Those familiar with the Subaru Legacy will be immediately familiar with most of the 2017 Outback's interior feel. Compared with many crossovers, the comfortable cabin of the Outback is decidedly upscale and the second row is far more spacious than will be found in similar-sized competitors. Soft-touch materials and quality placement and workmanship mark the Outback's overall cabin appeal.

Cargo space is also large and useful in the Outback's wagon styling. With the rear seats folded, a total of 73.3 cubic feet opens up with a low loading floor and wide opening at the hatch to allow easy access. Additionally, the famous roof rails integrated into all Outback wagons are easily accessed thanks to the low roof height of the car and have integrated crossbars that move into place and stow as needed. This has been a Subaru feature for some time and is only now becoming a common offering in the competition's offerings. 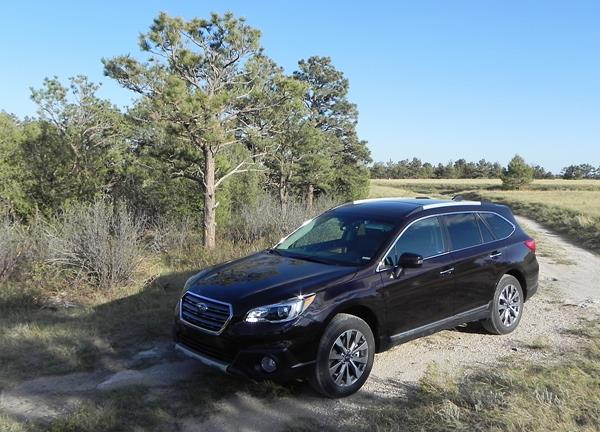 A big upgrade over the past couple of years has been in Subaru's infotainment system. The base model 2017 Outback comes with a 6.2-inch touchscreen that has a faster learning curve and less fuss than previous editions. A larger 7-inch screen comes with some package upgrades and trim levels, featuring a large, clear screen and access to more advanced smartphone connectivity apps and options.

Compared with others on the market, the Subaru infotainment system falls about middle of the road for its ease of use and a bit higher up on the scale for options and capability.

Although this 2017 model has not yet been rated for reliability, it's nearly identical to the 2016 model, which scored very well on all fronts. The Subaru brand enjoys a reputation for high reliability and resale and there's no reason to believe this won't hold for the 2017 Outback.

Although not fully tested and rated in crash testing for the 2017 model year, the 2016 model year is structurally identical. We believe that the excellent results for that model year will carry over. The 2017 Subaru Outback will very likely match its 2016 contemporary's Top Safety Pick+ rating from the Insurance Institute for Highway Safety and 5-Star overall rating from the National Highway Traffic Safety Administration.

There are no safety recalls associated with the 2017 Outback as of this writing. 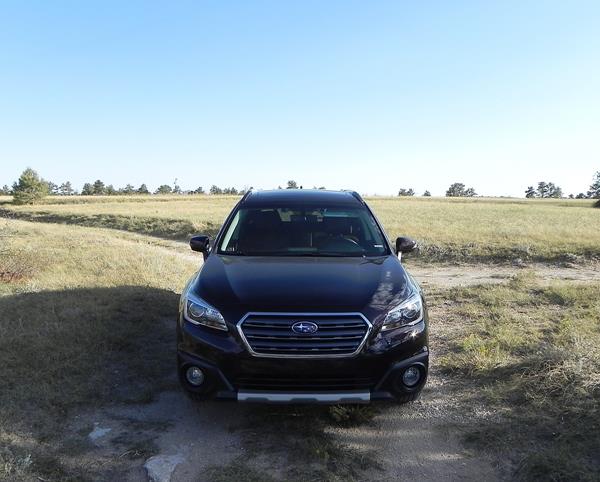 Subaru is well known for its boxer-style (horizontally opposed) engines. The Outback has two available, a 2.5-liter 4-cylinder and a 3.6-liter 6-cylinder. The 2.5L four outputs 175 horsepower and 174 pound-feet of torque. A continuously variable transmission (CVT) is standard, as is all-wheel drive. The 3.6L outputs 256 horses and 247 lb-ft through its own CVT and AWD is also standard with this engine.

In the real world, these engines are very different. The 4-cylinder (2.5i models) is sluggish and underperforming, but for many who opt for it, the high fuel economy returns are worth it. We can't blame them given that 28 mpg combined is far superior to most other small and compact crossovers competing with the Outback.

The 6-cylinder 3.6 (3.6R trims) is much more robust, but still not going to win any races when compared with the turbocharged options others might have. It's more than enough for the Outback in everyday driving, which is where it counts, and the extended towing and better muscle under load is more likely what buyers upgrading to this engine will need. Fuel economy numbers for this engine, including the new Touring package, are very near to real world as well.

With either engine, the 2017 Subaru Outback is a good drive on the road, absorbing bumps and creases well and delivering a quiet drive on the highway. Parking around town is easy thanks to the good visibility of the wagon and the included backup camera. For those who opt for the upgrade to the EyeSight system, with its adaptive cruise and extra safety tech, the Outback becomes a great commuter car and long-distance drive that minimizes driver fatigue.

Off the road, the Outback is as capable as the Subaru name and over 8 inches of ground clearance would imply. This isn't a rally car like the WRX or STi, but it's good at traversing most all terrains within its clearance and tire limits. Getting to the lake or the more remote campsite is easily doable in the Outback.

The base model price for the 2017 Outback is on par with other AWD-equipped small and compact crossovers. The best bang for the buck comes from the Premium and Limited trims, which hover in the $30,000-$35,000 range and offer a nice array of amenities and trim points. Similarly, the new Touring trim with the 4-cylinder engine option is priced at the high end of that range and also includes some good accoutrements.

The greatest value in Subaru, and especially the Outback, is in its resale, which is one of the highest in the business. No other crossover in the Outback's segment can match it for its value retention, so although the upfront price may be a bit higher than the competitors', the payback down the line is also much higher. 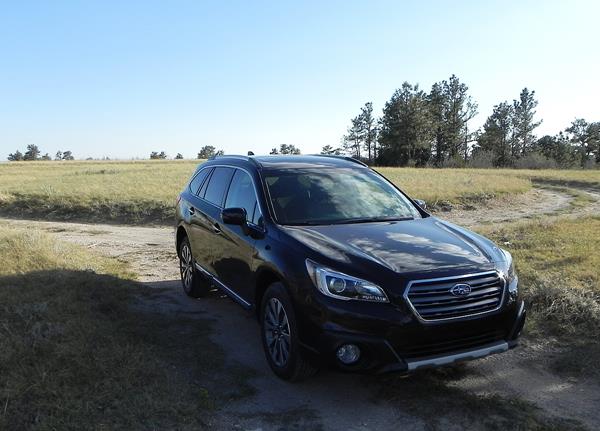 There are only a couple of wagon-style crossovers similar to the Subaru Outback. The new Volkswagen Golf Alltrack is the closest competitor and is similar on paper but has several drawbacks such as lower ground clearance and a smaller overall cabin and cargo size. It retails for a slightly lower price as well.

Otherwise, competition in wagon form comes from premium-level offerings from Audi and Volvo through the Allroad and XC70 respectively. These are considerably more expensive than the Subaru, as true luxury cars, but the XC70 has solid performance and family-ready credibility while the Allroad has good interior space and a fun drive dynamic.

Other competitors are crossovers such as the Kia Sorento and Ford Edge, both of which are larger in dimension but nearly matched by the Outback in interior space. Those who want a larger cargo space with a more square opening might consider Subaru's Forester as well.

Whatever it's compared with, the 2017 Subaru Outback is likely to be the top choice for many buyers for many compelling reasons. It's shape, size, capability and versatility are just starting points when examining its good qualities. Subaru has a winner and their climbing sales figures show it.