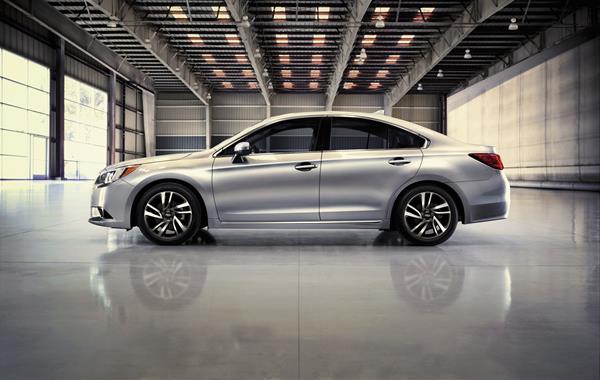 The Subaru Legacy is one of the longest-running Subaru models sold in the US. Subaru's staple sedan, the Legacy has all-wheel drive as standard and a wonderful daily presence that makes it a favorite among many buyers.

For 2017 the Legacy receives a few updates, including a new Sport trim level and the addition of Reverse Automatic Braking to the driver assist technology package for added safety.

The 2017 Subaru Legacy soldiers on with the redesign that was made a handful of years ago, which saw the sedan get a little larger and a lot more competitive in terms of interior experience. It competes well in the midsize sedan category, alongside its station wagon-styled Outback sibling.

The 2017 Subaru Legacy is a five-seat sedan in the midsize category with two engine offerings, several option packages for all five trim levels, and standard all-wheel drive. 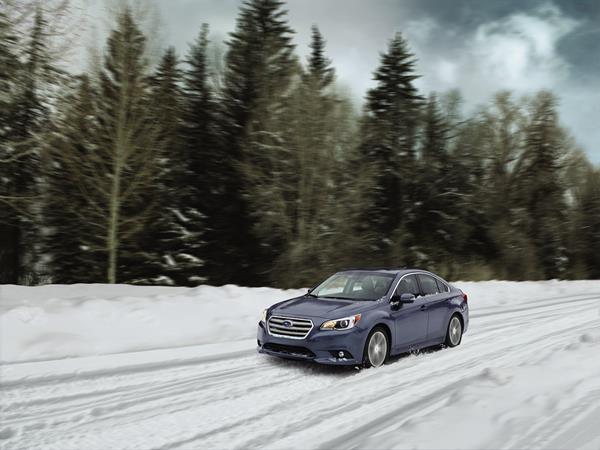 The Subaru Legacy isn't exactly an eye-grabber, nor does it really stand out in the parking lot. Where most in the midsize sedan category have gone for upscale, edgy or otherwise unique exterior designs, the Legacy remains sedate and uninteresting. It's not exactly boring, but it isn't very lively either.

The Legacy's look begin with a simple trapezoidal grille with a thin intake underneath and hawk-styled headlamps to either side. The grille flows off the top of the fascia with a couple of ridges along either side to highlight its flow and create the fenders beneath. The roofline of the Legacy is coupled with a fastback rear and clipped trunk.

The side panels for the 2017 Legacy are simple, with a single line across the top, going over the door handles, marking the beltline, and a line below edging slightly upward as a running board with forward movement. Bone lines underneath the simple bodywork create the rest of the curve for the doors.

The good news is that like a wallflower at the school dance, the 2017 Legacy might not look like much at first glance, but once you've taken the chance and asked it to dance, it could become the best mover on the floor.

That unassuming exterior for the Legacy is mirrored in its no-nonsense interior. There isn't much here to write home about, but looking at it another way, the Legacy (like most Subaru vehicles) has an interior that is designed largely for function, allowing form to follow. This might require getting used to in today's world of "bling first, ask questions later" interiors with lots of pizzazz and pomp.

With the 2017 Legacy, what you see is what you get on the inside. Comfortable seating, easy access to controls and storage, and enough of everything to make even the most demanding midsize sedan customer happy. The everyday aspects of the 2017 Subaru Legacy are excellent. "Which is the point," Subaru engineers would tell you. "Multi-colored interiors with a mess of inlay and trim are prone to peel and dirt. With the Legacy, you're only one step away from just taking a garden hose to it once in a while." At least, that's what we hope they're thinking.

The 2017 Subaru Legacy's interior is comfortable at all seating points, has a good amount of cargo in the trunk (with folding rear seats just in case) and plenty of long-term livability. That should be enough to make most buyers happy for the long haul.

The 2017 Legacy has an option to upgrade to a useful infotainment system that is both easy to understand and quick to adopt. Based largely on smartphone-style gestures and controls, the menu system of the Legacy's infotainment is simple, easy to read and quick to respond. Some competitors might have more functionality with more complicated options, but the Subaru system is much easier to handle in day-to-day use and likely faster to respond as well.

We think that most people will be happy with the smartphone integration, simple app options (Yelp, iHeartRadio, etc.) and other things included. Subaru's proprietary app and it's plethora of integrated inclusions is a smart way to do things that greatly simplify the often complicated question of, "Do we really need this in a car?"

There aren't many all-wheel drive sedans on offer in the midsize category and most of those don't get the kind of real-world fuel economy that the 2017 Subaru Legacy is capable of. Even front-wheel drive competitors are often only slightly better than the Legacy. The EPA estimates fuel economy for the 2017 model year to be 29 mpg combined, with 25 mpg in the city and 34 mpg on the highway. That's assuming the base 4-cylinder engine.

The 6-cylinder engine is a bit less efficient at 23 mpg combined (20 city, 28 highway). This is comparable to many 6-cylinder options on the market, though.

Most drivers can expect the Legacy's EPA estimates to bear out in the real world. 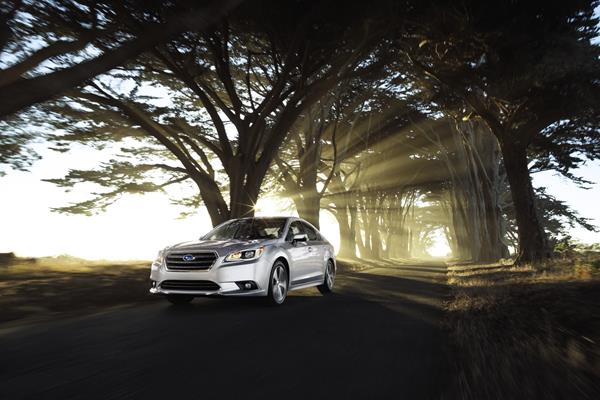 Subaru as a brand has a reputation for longevity and an unusually high resale value, thanks in large part to that reputation. In some models, that is definitely a well-earned assumption on the consumer's part. With the Legacy, it may be a bit presumptuous.

The 2017 Legacy is rated by the J.D. Power and Associates Vehicle Dependability Study as being "About Average" for expected reliability. This is explained by the relatively frequent complaints from consumers over some problems that the Legacy has had in this generation, most of which are more annoying than critical. Some trim parts and interior items are prone to breakage.

It's very difficult to argue with Subaru's philosophy of safety first. Where others might talk about it, Subaru actually delivers with every one of their vehicles being capable of getting top safety marks in crash tests. The Legacy is no different.

It starts with how Subaru designs a vehicle from the ground up, with the inherent safety a boxer-style engine brings (flat, low, hard to shove into a driver's lap), the framing and crash-absorption design of their cars, and the high visibility to be had from the Legacy's interior.

Advanced safety and driver assist systems from Subaru are hard to argue with. EyeSight is likely the best safety system on the planet for active safety measures. It utilizes a pair of cameras that see in three dimensions and in full color, working quickly to assess situations and adjust active measures and driver-assist options continually. EyeSight is available on all but the base model Legacy.

In crash testing, the 2017 Subaru Legacy received a full five-star rating from the National Highway Traffic Safety Administration (NHTSA). The Legacy also received top marks of "Good" for all crash tests done by the Insurance Institute for Highway Safety (IIHS), which named the 2017 Legacy a Top Safety Pick+. 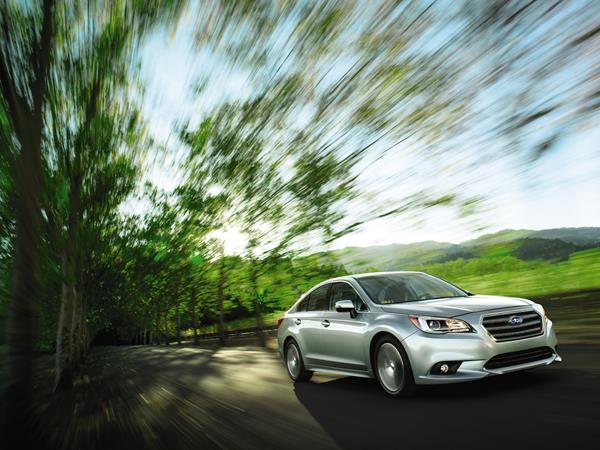 The 2017 Subaru Legacy has two engine options. Both are mated to a continuously variable transmission (CVT) with all-wheel drive. No manual transmission is available.

The base engine is a 2.5-liter 4-cylinder boxer-style (horizontally opposed) engine that outputs 175 horsepower and 174 pound-feet of torque. This is an engine that is adequate to the car, but that is in no way a jaw dropper or interest-keeper. The little four-banger for the Legacy is smooth and quiet, but not very exciting. It gets the job done and does it efficiently. That's about it.

The upgrade engine is a 3.6-liter 6-cylinder boxer engine that produces 265 hp and 247 lb-ft of torque. This is a more interesting combination with a faster punch and better feel on the road. It sacrifices fuel economy though and may not be the choice for many buyers.

The Legacy itself is a well-designed car in terms of how it performs and handles. The everyday driving experience may not be sports-car like, but it's well-mannered and far from boring. The Legacy's signature all-wheel drive is also a boon, especially when the weather turns bad or dirt roads come into the picture. In those situations, the 2017 Legacy is by far the best choice on the market for staying upright and getting home safely.

Subaru doesn't often compromise on their sticker price because, frankly, dealerships don't need to. Every car on the lot will find willing buyers. That's a truism. And no matter how bad off your trade-in Subaru might be, they'll take it. Because it will resell.

For these reasons, no one should expect any kind of stellar upfront deal or backroom pricing structure to get a 2017 Legacy off the lot for well below sticker value. It's not likely to happen. The good news is that Subarus are generally priced right and have the highest resale value in their respective class. The Legacy included. Which means the price paid now is going to stay consistent and loss of value will be minimal over time.

So despite there being little money on the hood to buy the Legacy, it's still going to be a great deal down the line. Subarus consistently have the lowest industry cost-to-own and the highest resale values of any brand.

In the midsize "boring sells" category of cars, the Legacy fits in quite well. Being very average in looks and interior suits it well. It's the places that matter to midsize buyers where the 2017 Subaru Legacy really stands out: safety, fuel economy, performance and value. In those arenas, there are few competitors that are as complete in packaging as the Legacy.

For those comparing, the well-done Mazda Mazda6, Ford Fusion and Toyota Camry should all be considered for their various merits. The Mazda is far more fun to drive and the Fusion is far more well-appointed. while the Camry sets the standard for the segment in terms of roominess and daily excellence. Compared to these, the 2017 Legacy should not be overlooked for its well-done balance of those things that usually matter most to midsize sedan buyers.