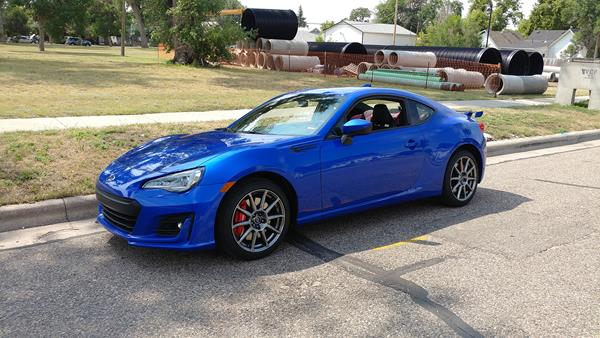 The little Subaru BRZ is one of the Toyobaru Twins with its sibling the Toyota 86. It's a small coupe boasting a solid entry-level rear-drive sports car package aimed at driving enthusiasts who don't need the fastest or most expensive bragging rights. The BRZ is notable for its great look, fun drive and readiness for upgrade that make it a car for enthusiasts.

This year, the BRZ receives the most extensive update since its introduction in 2013. These updates include a bump in power, some transmission tweaks, styling upgrades and some new standard equipment. A new Performance package is also added, which is a must-have for serious drivers wanting to get track ready quickly.

Also much appreciated are the interior upgrades to the 2017 BRZ versus previous years, namely to infotainment and comfort points throughout the cabin.

The 2017 Subaru BRZ remains a favorite as a fun little car whose sole focus is driving pleasure and love of the road. There are three trim levels for the 2017 BRZ: Premium, Limited and "Series.Yellow." 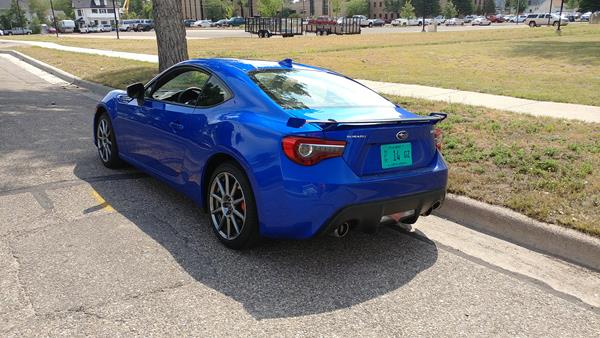 The little BRZ has always been a great-looking sport coupe. Classic styling in a half-and-half design sets the foundation for smooth appeal. The long, low, fender-emphasized hood runs about a third of the way along the car and the driver's seat sits at the center of the chassis. Behind, a fastback roof, clipped rear deck and wide fenders finish the profile. The addition of the spoiler at the rear with the Limited edition is a great touch.

Changes this year include a few updates for the front fascia to de-emphasize the intake to bring the eye more into that sleek hood and the strong fenders that flank it. LED headlamps are now standard and have a narrower appearance to their taper toward the Subaru badge that quietly resides at the center of the grill overhang.

The 2017 BRZ's look is well done and utilizes the elements that have have underlined many popular sports coupes of the past. A longer overhang at front is emphasized by the nearly-deleted rear bumper overhang at the rear, making the wheelbase appear more rear-power centric. The low, long hood promises excellent visibility for the driver and a good view of the road as it approaches. It also gives a slippery, fast-paced appearance to the car that is further denoted by the raked windshield and fast curve of the roofline.

Simplicity and a focus on purpose is the mark of the BRZ's interior design. It's largely of Subaru design with some Toyota influences. New this year is a standard infotainment setup with navigation and a rearview parking camera. The Limited and Series.Yellow models also have an upgraded gauge cluster that adds performance metrics to the driver's options.

The BRZ is otherwise as it's always been on the inside: focused on the driver and moving forward. The front seating is firm but comfortable with a decided sporting authenticity to its bolstering and layback design. For those over six feet tall, the roof will be low, but not so low that head scraping is the norm. Adjustability in the seating and steering mean that most will easily find a comfort spot in the BRZ.

As with a sports car of the BRZ's bent, the entry point requires a low bend and stretch and a squared knee to exit. Both the driver and front passenger are going to be comfortable in the car. Those in the rear, though, not so much. Those seats are mainly for the dog, some groceries or a lucky kid who's riding along. They're otherwise just for show. Most 2+2 coupes like this share that same attribute.

Trunk space in the 2017 Subaru BRZ is good for daily use, but limited at just 6.9 cubic feet. The rear seats fold down in a 50/50 as standard, so the occasional larger item may still fit.

One thing of note in the BRZ is that the interior is accommodating enough for most people to enjoy on a daily basis when the emphasis is on what's happening outside rather than inside the car. It's all about the drive. To that end, the 2017 BRZ is excellent inside with good ergonomics and a smart driver's layout that holds attention on the drive rather than on trying to figure out where to find something in the car.

The technology in the 2017 Subaru BRZ is a huge step forward from what's been available in previous years. Restrictions with the Toyota-Subaru agreement on the BRZ/86 has meant that most of the tech offered was aftermarket rather than before. Now that the low-end Scion brand is no more and the Toyota 86 has replaced the FR-S, those restrictions seem to have loosened.

The 2017 Subaru BRZ now comes standard with not only Bluetooth connectivity and HD radio, but with navigation and some simple built-in apps for the infotainment. Subaru Starlink is the standard user interface for the BRZ and its 6.2-inch touchscreen and includes smartphone app integration and satellite radio. Those were only dealer options before. A single USB port is standard and another is added with the Limited trim level upgrade.

The tech in the BRZ is not cutting-edge or even up to par with some of the most advanced options in more expensive vehicles, but it's very good for the car and adds just enough that most who are interested in a driver-centric vehicle like the BRZ will be happy. Having satellite radio and Bluetooth connectivity is a boon for longer-distance and daily driving in the Subaru BRZ.

The app integration includes Aha Radio, Pandora, iHeartRadio and Stitcher, which work well if your phone has access to those, but uses your phone's data connection for access.

The fuel economy estimates for the 2017 Subaru BRZ are good for the class and achievable in the real world. The standard transmission is EPA rated at 25 mpg combined, with 21 mpg in the city and 29 mpg on the highway. The automatic transmission ups that to 27 mpg combined, 24 city and 33 highway.

Our week in the manual transmission with the Performance package returned a 24 mpg average with a heavy load of highway driving. That also included some performance driving, so achieving higher mpg numbers is definitely doable for everyday drives.

The 2017 Subaru BRZ is rated About Average by the J.D. Power and Associates Vehicle Dependability Study. Because there have been no recalls and the 2.0L engine has a high reliability rating in other vehicles, we are bumping the BRZ's score up slightly as we have done with the Toyota 86/Scion FR-S in the past.

Safety testing and crash test data for the 2017 Subaru BRZ are spotty, but all of it is good. The National Highway Traffic Safety Administration has rated the 2017 BRZ with a four-star (out of five) rating for frontal crashes and a five star for rollover. The Insurance Institute for Highway Safety has rated the BRZ with a top score of Good for all crash tests except the small overlap front test, for which it received a second-best Acceptable rating. 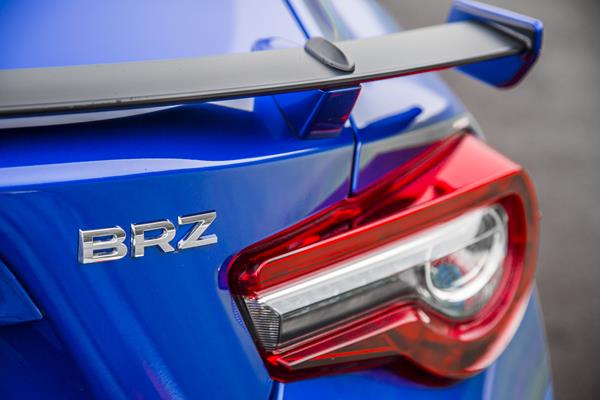 The 2017 Subaru BRZ remains rear-wheel drive and is the only vehicle in the Subaru lineup that is not all-wheel drive. The rear-wheel drive design marks it as the sport-centric car in Suby's lineup. With the 2017 model, the 2.0-liter engine (a boxer, the same 4-cylinder found in many Subaru cars) has been upgraded a bit.

With the 6-speed manual transmission (the standard BRZ setup), the engine outputs 205 horsepower and 156 pound-feet of torque. With the automatic transmission, those numbers drop to 200 horses and 151 lb-ft. To go with this slightly increased power output for 2017, the manual transmission has been slightly retuned to handle the extra torque and deliver it more succinctly throughout the gears. We didn't notice a huge drop in 0 to 60 mph times between the 2016 and 2017 model years in manual-equipped BRZ/86 models, but our average 0 to 60 mph time was slightly lower at about 6.2 seconds versus roughly 6.5 seconds previously.

Also changed this year are some of the chassis dynamics for the 2017 BRZ. These include a bit of improvement to the steering tuning, which was already stellar, and a somewhat stiffer corner experience, though we're giving credit for that to the larger brakes on the Performance package rather than to the chassis. The larger brakes mean that the BRZ gives the driver slightly more control over vehicle physics in the corner.

They also appeal to the other aspect of the car's point of being: upgradeability. The larger brakes mean that the braking doesn't require modification for some of the engine upgrades made to improve performance. Enthusiasts love adding things to the BRZ to increase engine output and braking has often been a required secondary upgrade to go with those changes. That's no longer the case.

As it is, stock, the 2017 Subaru BRZ may not be the quickest off the line or the fastest on the road, but it's definitely one of the most fun to drive.

For the price paid, the value received in the 2017 Subaru BRZ is excellent. If the car is purchased as what it is - a pure driver's vehicle meant for fun on the road - then the price paid will be well met.

Most buyers are likely to be in the $26,000 to $27,500 range for their purchase, adding a few amenities or going to the Limited trim level for the best bang for the buck. 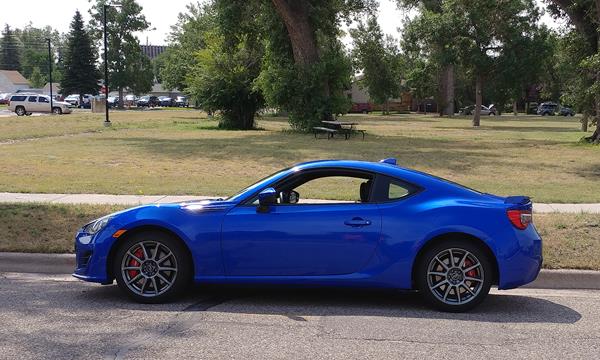 There are no direct competitors to the 2017 Subaru BRZ outside of its twin, the Toyota 86. The Toyota has slightly different interior elements and different badges, but is otherwise identical.

Loosely, buyers are likely to be comparing the BRZ to other vehicles like the Ford Focus ST or Volkswagen GTI and perhaps to the Mazda Miata and Fiat 124. The Ford and Volkswagen are both turbocharged models with price points similar to the BRZ, but with drive dynamics and appeal that is far different. Neither has the sleek sports car styling of the Subaru and both are likely to be more expensive once equal interior elements are added. The Mazda and Fiat are both two-seat convertibles that have less power and speed potential than does the BRZ.

Without direct competition, but with an admittedly limited niche of buyers, the 2017 BRZ continues forward as a showcase of what a modern driver's car really is. It's focused on delivering a fun drive with a strong connection to the road in a package that lets the world know this is what you want. It's versatile enough to be a daily car, but not so much so that it must compromise on its core mission of delivering everyday fun and excitement.