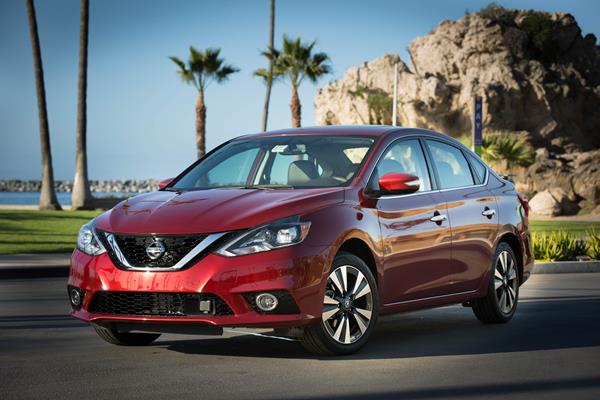 The 2017 Nissan Sentra carries on the current generation's look and appeal as a practical, well-priced sedan for the compact market. Refreshed in 2016, the 2017 model sees little change, but what changes there are fundamentally change the car's position in the market. The Sentra has gone from an average offering to a much more competitive vehicle choice.

Those changes include an improved interior that is quieter and has a more usable storage bin for the console. This augments the spacious back seat and excellent trunk space that were already features of the Sentra.

Another addition is the SR Turbo model, which adds a sportier, more fun drive to the car. This sits above the mid-tier SV model in the SR line, but below the high-end NISMO package. It uses the same turbocharged engine the NISMO does, adding a lot of oomph and wooo to the Sentra's demeanor.

In all, the 2017 Nissan Sentra is a well-balanced offering in the compact market. 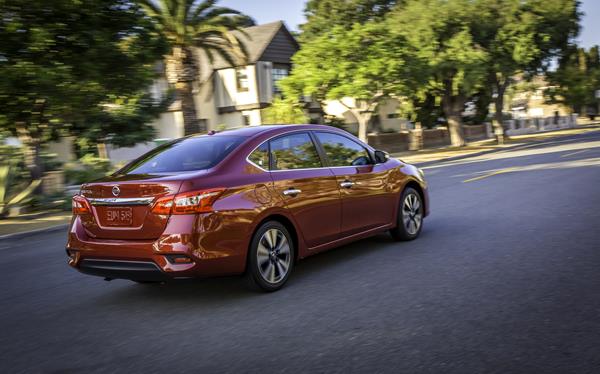 The Nissan Sentra isn't the most eye-catching car on the lot, but it's not a visual slouch either. Back in 2013 when this design was introduced, the Sentra was a standout in its class, with strong, sporty lines and a balanced nature that made it look unique. Most other automakers have caught up, so the Sentra is no longer the looker it once was, by comparison.

As it is, the 2017 Nissan Sentra has a well-shaped build to it. The hood and trunk are visually about the same length from the larger passenger compartment, creating a balanced appeal to the overall sedan. Sporty fender rounds, a curve to the beltline and a straight-backed rear motif create a forward motion for the car.

The Sentra has small wheels that are not thrown out to the corners, giving it a more practical sensibility to go with that sport. The emphasis here is on a good-looking, practical car rather than on a sporty, fast-paced machine. That seems to work fairly well for the 2017 Sentra.

The interior of the 2017 Sentra gives a feel of basic functionality with a little design flair to keep the eye interested. The functional, three-point steering wheel, simplified cluster and center console design, and Euro-curve to the dashboard all speak to form and function combining in a fairly unadorned fashion. Offsets of brushed chrome and gloss black are just decorative enough to keep the interior from looking too Eastern Block. 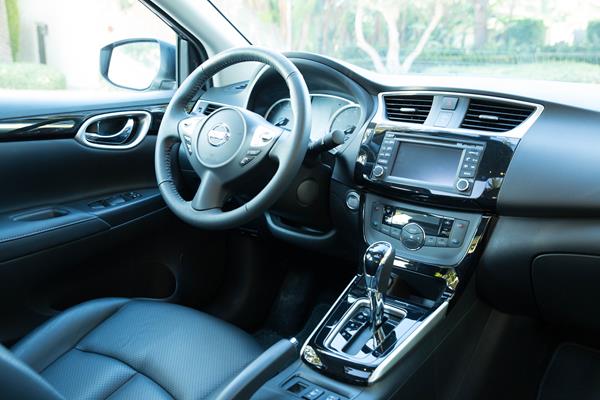 Alignment and positioning of the controls and interfaces are exactly where they should be, with enough adjustment for most drivers to find their sweet spot. The greatest improvement to the Sentra's interior for the 2017 model year is the thicker acoustic glass used in the windscreen, which lowers road noise considerably. The interior design was already replete with enough soft plastic and well-done joinery to make it one of the quieter ones on the market, but this addition keeps the 2017 Sentra up to par with its rivals. An important point as most of the competitive compact sedan market is moving upscale in this way. The larger center console of the 2017 Nissan Sentra will push it ahead of some rivals in terms of interior storage space.

Another high point for the Sentra's interior are the back seats, which are much more accommodating than what is the norm in the compact segment. It's still a bit of squeeze for full-sized adults back there, but much more doable than might be expected. Head and legroom space is nearly on par with the average for a midsize sedan.

Trunk space is also good for the class, at 15.1 cubic feet. The standard 60/40 rear split-fold seating expands that considerably.

The lower-end models of the Sentra get basic technology functionality such as Bluetooth connectivity. The SV package upgrades to a 5-inch touchscreen with basic NissanConnect functions and the addition of a 5-inch driver information screen in the instrument cluster. The SL trim (or some package upgrades to lower trims) adds a larger 5.8-inch infotainment screen that adds navigation and voice controls.

We drove the SR Turbo model, new for this year, which had the upgraded infotainment option. NissanConnect has come a long way since its inception, but the interface is becoming a bit dated in terms of its graphics and general design. Functionality is very good, and on par with what can be expected of the lower-cost compact segment.

There are three options for the 2017 Sentra, all of which have different fuel economy returns. The base model with a manual transmission is 30 mpg combined, with 27 mpg in the city and 35 mpg on the highway. Upgrading to the automatic transmission (continuously variable, CVT) boosts that to 32 mpg combined (29 city, 37 hwy). That's a bit better than the class average.

New for this year is the Sentra Turbo model, which received 28 mpg combined for the manual transmission, or 26 mpg city and 32 mpg highway. Equipping the CVT to the SR Turbo raises those to 29 mpg combined (27/33). In the real world, our 2017 Sentra SR Turbo model with the manual transmission saw very close to those numbers at about 27 mpg all told. 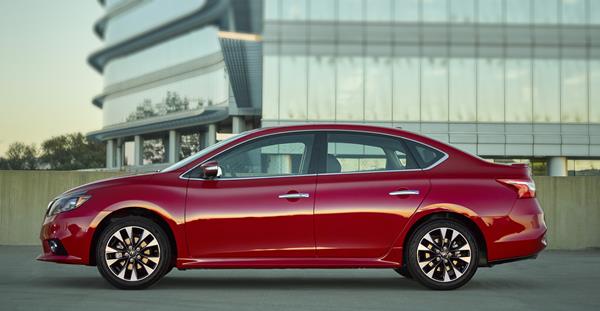 The 2017 Sentra is rated as "About Average" in the J.D. Power and Associates Vehicle Dependability Study. This follows a similar score last year and is accompanied by no major recalls.

The 2017 Nissan Sentra has been rated with excellent scores from crash testing. The National Highway Traffic Safety Administration (NHTSA) gives the Sentra a four-star overall rating with four stars for frontal and rollover crashes and five stars for side crash tests.

The Insurance Institute for Highway Safety (IIHS) rates the 2017 Sentra as a Top Safety Pick with top scores of "Good" on all crash tests.

The standard Sentra comes well equipped with standard safety items that include a suite of airbags, auto-on headlights, etc. Optional equipment can upgrade those to include blind spot monitoring and lane departure warnings, among other things.

Performance numbers in the 2017 Nissan Sentra will depend largely on the trim level and drivetrain choice. The basic engine is a 1.8-liter 4-cylinder that outputs 130 horsepower and 128 pound-feet of torque. A 6-speed manual transmission is standard and a continuously variable transmission (CVT) is an optional upgrade. Acceleration with these transmissions will be below par for the class and handling is only about average. With the base engine and either available transmission, the Sentra is primarily an A to B car, not meant for fun.

The practical-minded Sentra does get an upgrade for 2017, with the new SR Turbo model. This has a 1.6-liter turbocharged 4-cylinder engine that is also found in the NISMO model. That engine outputs 188 hp and 177 lb-ft of torque. A 6-speed manual is the standard with a sport-tuned CVT as an option. The Sentra Turbo finally adds some fun factor to the Sentra, alleviating a lot of the complaints we had about the Sentra last year. Acceleration with the Turbo model is much better than with the base engine, falling into the 7-second range. Besides price point, the major difference between the SR Turbo and the NISMO model is the visual upgrades in the NISMO option.

On the highway, the standard engine models of the Sentra are good but not stellar. Acceleration and passing are somewhat sluggish, especially with the CVT, and power delivery can be hesitant when at highway speeds. Around town, the Sentra is confident and does well in normal driving situations.

With the 2017 Sentra Turbo model, all of that changes and the car becomes much more aggressive in passing and acceleration. It retains its around-town confidence as well, making this a great choice for those who want a bit more than just practicality from their compact. The same can be said of the NISMO model. 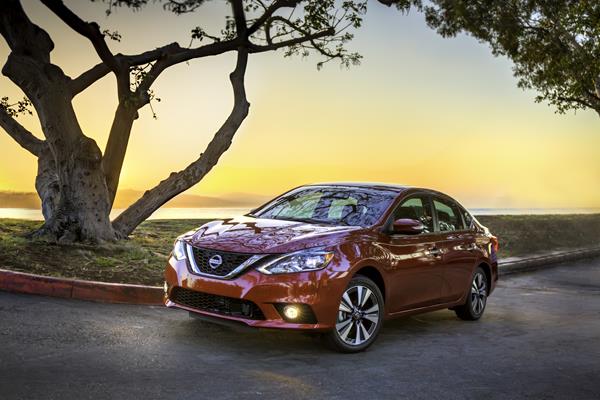 The Nissan Sentra is one of the lower-cost compact sedans on the market. It comes well-equipped in its base model, and tops out at about $25k for the NISMO model. The SR Turbo we test drove fell in the upper two-thirds of the base and top price of about $22k. There is an affordable Sentra model for just about every buyer in the compact category.

There are a lot of competitive offerings in the compact sedan market. The 2017 Nissan Sentra is one of the more practical-minded of the offerings here, with a good entry price and value package and a more useful everyday package. For those who want more zing in their drive, the Ford Focus and Mazda3 are great choices. Rivals in the practical arena include most hatchback options as well as the well-priced Volkswagen Jetta and the Hyundai Elantra.

On the whole, the 2017 Nissan Sentra is a compelling offering and the SR Turbo and NISMO models are fun and add a new level to the Sentra line.