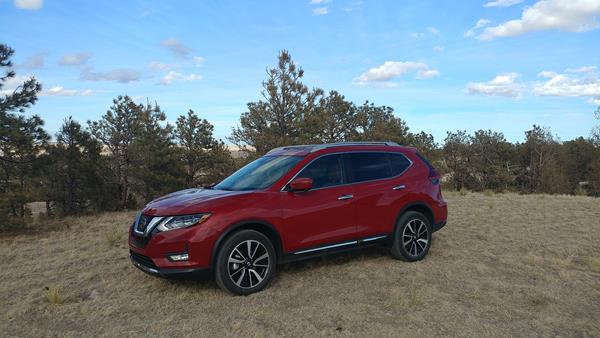 The 2017 Nissan Rogue carries on with the current generation of this compact crossover. Now a best-seller in the segment, the 2017 Rogue has seen some styling upgrades for the new model year, but is otherwise unchanged from 2016. New to the Rogue lineup this year is a hybrid model with excellent fuel economy for a relatively low premium.

The Nissan Rogue is best known for its family-oriented design and high value proposition. There are several Rogue models to choose from, ranging from the generational carryover Select base model to the range-topping Platinum Reserve.

There are many high points to the 2017 Rogue, but in this competitive segment it can pay to shop around since most manufacturers are bringing their A game to market here. Among the excellent choices, the Rogue remains the number one choice of many buyers and there are plenty of good reasons for that. 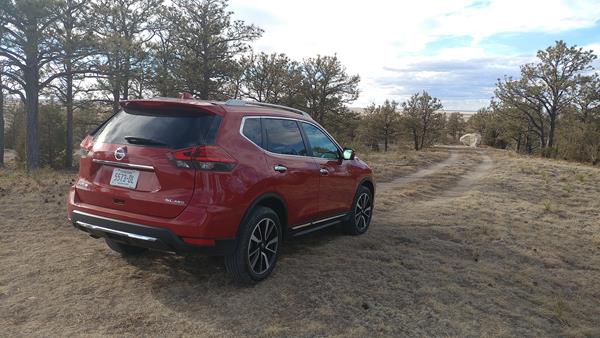 Nissan did some light refreshing to the 2017 Rogue as a mid-cycle update. The exterior changes were minimal, leaving the Rogue looking much as it was. The 2017 Nissan Rogue's styling is dated compared to the rest of the segment. It has good lines, but a few too many curves for today's market. Especially in the hood and front fascia.

This doesn't mean that the 2017 Rogue is ugly, it's just not contemporary with the look of today's compact crossover. And in its fast-growing market, that's important.

The front fascia of the 2017 Nissan Rogue is centered by the signature V-motion grille that marks all Nissan vehicles. To either side are thin, narrowing headlamps that create a set of wings for the V grille. Underneath, a small but aggressive scoop brings air into the engine compartment, and above a lightly creased hood slopes gently towards the raked windscreen. The overall look is more rounded and angled than found on other Nissan crossovers - more similar to the Nissan passenger car lineup than SUVs.

Bodywork on the Rogue is relatively plain but has curves and a swooshing beltline that creates both a narrowing greenhouse and a forward movement to the overall style. The rear pillar is notched in Nissan's signature Euro-swoosh, and the roofline slopes slightly down toward the rear hatch, accented by a small aero spoiler at the end.

The rear hatch of the 2017 Rogue is rounded at top and flat toward the bumper before finishing with a sharp-looking departure angle to the lower bumper fascia. 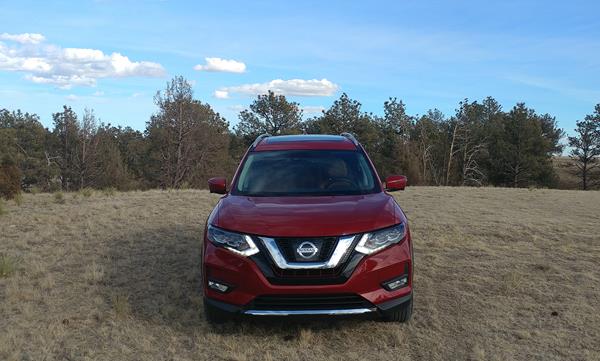 The 2017 Nissan Rogue's interior is almost exactly the same as it was for 2016, but truth be told, there isn't much to improve on. The Rogue has one of the best interior experiences you can find in the segment, with what we consider class-leading seating comfort. Cargo organization in the Rogue is also well ahead of the class.

The only downsides to the 2017 Rogue's interior are small ergonomics issues that can become annoying over time. One of those is with the distance between the driver and the infotainment/navigation screen, which can make some things hard to see. Especially given the yesteryear graphics quality of the infotainment system. Glare from the sun in the morning and evening can often mean glare in the driver's eyes from interior surfaces, due to the materials chosen and the angle of the exterior windows. Those are our chief concerns with the 2017 Nissan Rogue.

Aside from that, the 2017 Rogue is nearly perfect. Seating is extremely comfortable in both the front and second rows. Nissan's NASA-inspired Zero Gravity seating is standard issue in the Rogue up front, as well as in the outboard seats in the second row. Wide-opening front and rear doors make access to the seating in the Rogue very easy.

If optioned, the third row is not as roomy or comfortable, but will do in a pinch for small children in safety seats or preteens not prone to complaining. A third row is relatively rare in the compact segment and can be useful.

Without the third row, the cargo space is expansive for a compact, and has an excellent storage and organization system that is unmatched in the segment. Shelving can be shifted and moved to create multiple tiers or segregated areas to keep cargo from rolling into things or being crushed. It seems gimmicky until it's tried and the system is standard on non-third-row Rogues.

Visibility is not as good as it could be in the 2017 Rogue, but if the upper trims or the add-on safety package is included, a 360-degree AroundView monitor system for backing up and parking makes up for that in spades.

The infotainment system in the 2017 Rogue is solid and well-vetted, but dated. The screen, even at its largest, is small compared to what's now standard on the market, and it's up and away from the driver enough that most will need to lean forward to use it. That means distraction.

Functionality is OK but not excellent in terms of speed of use, screen clarity and the options available in the Rogue. We're getting used to seeing more app integration and options like WiFi in today's market and that's not available in the 2017 Rogue.

For most everyday use, the Rogue's infotainment is great and easy to learn to use. 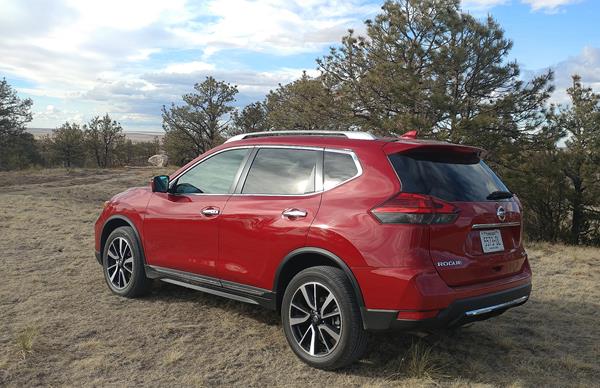 The Rogue's powertrain and drivetrain is unchanged from last year, though EPA tests have changed a bit, altering the MPG expectations from this setup. The EPA now rates the 2017 Rogue at 25 mpg in the city and 33 mpg on the highway in its front-wheel drive standard configuration and one point lower on each of those scores with the all-wheel drive option. Those returns are possible in the real world, with our drive of the gasoline model in AWD returning about 27 mpg overall.

The Rogue Hybrid returns even more favorable numbers at 33 mpg in the city and 35 mpg on the highway. Our week-long test in the hybrid showed it to be real-world capable of those numbers, with an overall average of 34.5 mpg.

The Rogue's expected reliability has not changed since last year. The J.D. Power and Associates Vehicle Dependability Study still rates the Rogue with an "About Average" rating. There have been no recalls related to reliability or dependability for the 2017 Rogue, as of this writing.

The 2017 Nissan Rogue carries over with the 2016 model's excellent safety expectation. Crash tests by the National Highway Traffic Safety Administration (NHTSA) gave the 2017 Rogue an overall four out of five stars in crash test results. The Insurance Institute for Highway Safety (IIHS) gave the 2017 Rogue a Top Safety Pick status, meaning it achieved a top score of "Good" on all crash tests.

We note that while there high-end active safety measures such as emergency braking and the like are available for the Rogue, they are only available on the top-most trim level at a steep premium. Most Rogue owners will not have those advanced safety options installed.

Performance in the 2017 Nissan Rogue remains unchanged. A 2.5-liter 4-cylinder engine runs through a continuously variable transmission (CVT) with an output of 170 horsepower and 175 pound-feet of torque. Front-wheel drive is standard and all-wheel drive is optional.

Acceleration in the standard Rogue is not sluggish, but it's not exciting either. When pressed into service to pass or run up an on-ramp with gusto, the transmission whines loudly.

New for this year, the 2017 Nissan Rogue Hybrid has a combined gasoline-electric system outputting 176 horsepower from its 2.0-liter 4-cylinder and 30 kW electric motor. The CVT is still standard here. Acceleration is not much different from the non-hybrid model, though it is slightly more peppy from a standstill thanks to the immediately available electric torque.

Braking and handling are not sporty in the 2017 Rogue either, but they're just about what buyers in this segment would expect from a family oriented crossover. We do like the higher seating position and more commanding view it offers and the Rogue's ride cushion is excellent, absorbing all but the harshest of road impacts. 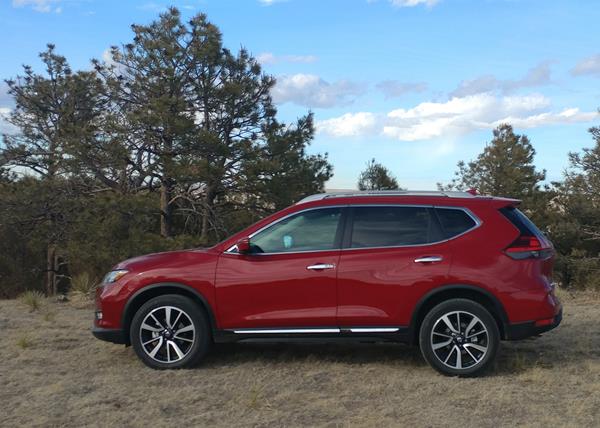 The Rogue has one of the better pricing structures in its segment, thanks to the previous-generation Rogue still being available as the Rogue Select. Even above that mark into the standard and more common trim levels, the price points for the 2017 Nissan rogue are excellent. Only the most uppity trim is priced above $30k, with nearly all purchases more likely to fall in the mid-20k's. That's superb given the value returned with this family crossover.

Resale values for the Rogue are not traditionally very high, but the vehicle is experiencing a continued sales surge that started early last year and has held through until now. Nissan is aggressively acquiring market share with the Rogue and it's now the best-selling crossover in any segment in the US.

Number crunching will show most buyers that the best bang for the buck is in the SV and SL trim levels.

The compact crossover segment is extremely competitive and is the fastest-growing vehicle market in North America. The Nissan Rogue sells very well in the segment, but shoppers should also look at the well-executed Hyundai Tucson for its value proposition, and the very excellent and fun to drive Mazda CX-5. Shoppers should also make sure to consider the Ford Escape with its fun engine lineup and sporty nature.

The 2017 Nissan Rogue is a best-seller in the compact crossover segment because of its family oriented design and well-rounded build. It's not too sporty, not too plain and not too unusual. The Rogue is priced right for most budgets and has options that make it configurable for most people's needs when buying in this segment. The new fuel-sipping hybrid option only adds to those benefits.