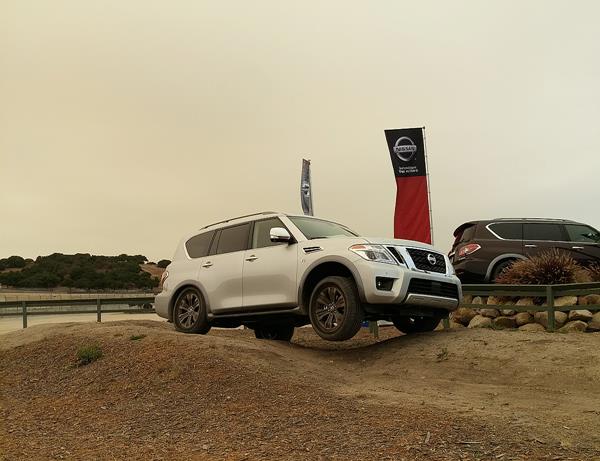 Nissan discontinued the Armada sport utility vehicle for the 2016 model year, taking the time to redesign it into an all-new offering. The 2017 Nissan Armada has proven worth the wait, with the all-new body, chassis, powertrain and interior proving that the SUV segment could use some shaking up.

The Armada is a full-sized SUV with a traditional body-on-frame chassis and a lot of truck-like capability. With seating for up to eight, trim levels that will appeal to just about any budget within this segment, and an interior that can rival many premium-level offerings, the Armada is definitely a big step up from previous generations.

Now based on the global platform of the Patrol, the Armada has an all-new V8 engine shared with the big Titan XD pickup and a stronger transmission with an eye towards smooth highway driving and towing. There's a lot to consider with this big SUV and anyone shopping in the full-sized segment will want to check it out.


What We Love About the 2017 Nissan Armada


What We Don't Love About the 2017 Nissan Armada 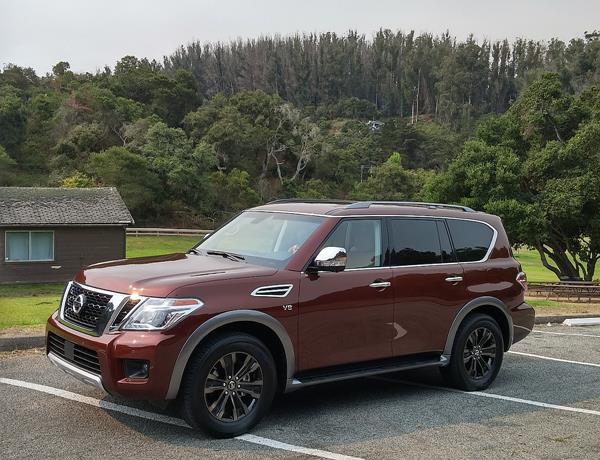 The Armada is a big, beefy sport utility vehicle, and in this segment, it's difficult to hide the basic square-bodied shape required for basic function. Yet the 2016 Armada does a good job of this. The front grille and large wheel wells, along with the high ground clearance make no bones about this being a truck-based SUV, but the refined body shaping helps take the edge off of the square shape.

Nissan took a note from its premium brand Infiniti, incorporating design elements from the QX series of crossover-SUVs. The rear quarter, especially, carries the Euro-swoop for the glass and its large rear fender is another hint of Infiniti design help. The large fender bulge and pronounced running board are definitely Nissan.

The exterior of the 2017 Nissan Armada is both muscular and refined, making for a good look overall that stands out well in the segment. 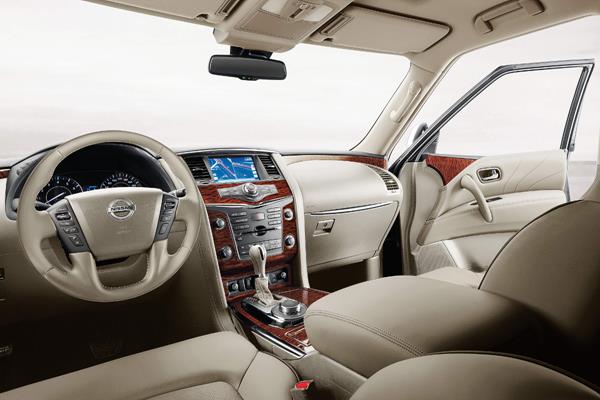 Stepping inside the 2017 Armada finds that its interior takes a lot of queues from the higher-end and luxurious Infiniti QX80. This speaks well for the Nissan, which has a high materials quality and excellent interior feel in comparison with many of its contemporaries.

The interior of the Armada is spacious and comfortable. The front row is well laid out and the driver's controls are nicely positioned for most people, especially given the adjustability options. The second row is also very comfortable. Even surprisingly so for a large SUV. The third row is more tuned towards smaller occupants. Adults will find the seat cushions too low, causing a lot of knee rise, but fore-aft spacing is good.

Another weak point in the Armada is cargo space. It's surprisingly small for an SUV of this bulk. There are 49.9 cubic feet behind the second row and 95.4 in all when the second row is folded down. This is not entirely flat loading either, as the second row is a bit too well padded to allow a totally flat fold. Some competitors beat this amount of cargo by a substantial margin.

The 2017 Armada includes Nissan's latest infotainment interface, which is based on an 8-inch touchscreen as standard. This system is functional and useful for most needs and interfaces with phones well, with an easy pairing setup that makes the process quick. Navigation is also standard, as is a 13-speaker Bose stereo.

Upgrades to the infotainment are slim, but the Platinum package adds a rear seat entertainment system that includes 7-inch monitors built into the headrests, a DVD player, and two more USB ports along with audio-video inputs in the rear for game system or other plugins. A remote control and a pair of individually tuned wireless headsets are also included.

The tech options in the Armada are plentiful at its base level and nicely done. There are better systems out there, but few are included in the base price of the vehicle. 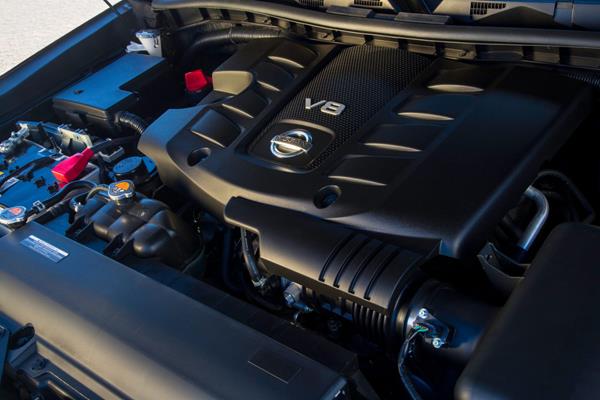 Perhaps the weakest point for the Armada is its underperformance in fuel economy. The powerful drivetrain running this big SUV results in EPA ratings of only 16 mpg combined, with 14 mpg in the city and 19 mpg on the highway, for the rear-wheel drive models and a point lower on each point (15, 13/18) for the all-wheel drive option. These are well below segment norms.

Although the 2017 Armada has not received any predictions for its reliability and quality, the brand's history with this model and a new class-leading warranty lead us to believe that it will fare well in the long run. Nissan's use of this platform in several vehicles globally is another indication of their engineering expectations for the longer term.

As of this writing, crash test results for the 2017 Nissan Armada have not been published. We expect that the big SUV will do well, given its bulk and the advanced safety features available for it. 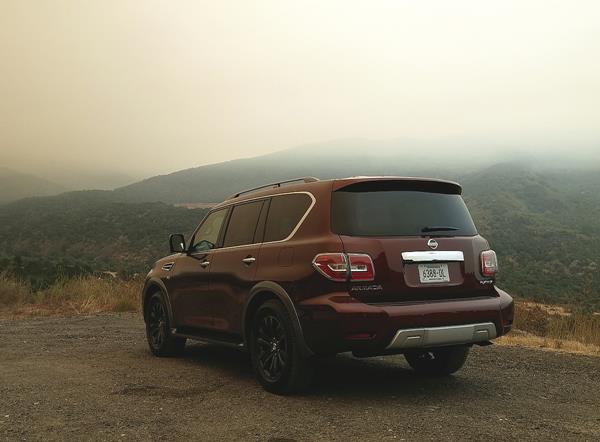 There are not many in the full-sized SUV segment that can boast the kind of all-around excellence that the 2017 Nissan Armada has. The new 5.6-liter V8 engine and 7-speed automatic transmission are shared with the big Titan XD pickup truck and are excellent performers. In the Armada, towing is rated at up to 8,500 pounds and the 390 horsepower and 394 pound-feet of torque are available early in the RPM curve and for a long period throughout its band. That makes for solid acceleration and power at almost any speed. Better, the low gearing of the first three gears in the transmission mean towing is a breeze in the big Armada.

Around town the SUV shows its bulk, but is remarkably maneuverable despite that. That big, powerful engine is relatively quiet in the Armada, setting it apart from its V8 competitors that trend towards muscular noises at all times. Smooth shifting and a tight, but forgiving chassis mean that on the road, the 2017 Armada is a very comfortable ride despite its height.

We were impressed overall with the Armada's capabilities off the road as well. Even with factory-equipped all-season tires that weren't very aggressive in their tread, the Armada climbed dirt hills and bounced along terrain without complaint. A good driver can take the Armada just about anywhere a more technically capable machine would tread, if needed. So for the family that needs to haul a lot of people and gear, as well as pull a trailer and occasionally leave the pavement to do all of that, the Armada definitely fits.

The entry-level price for the big Armada is a bit high compared with some of the competition in this segment, but the amenities and capabilities included are generally of higher caliber to make up for that. At the mid tier, the Armada is on par with its contemporaries and offers a compelling mix of goodies and trim for the price. Especially with the usable third row, excellent towing and superior drive dynamics.

At the top tiers, especially the Platinum package, the price for the 2017 Armada is high, but the cost and returns are on par or better than premium-level offerings from luxury brands and the Armada becomes very competitive against those higher-end vehicles. In a way similar to Ford vs. Lincoln, Nissan seems to be encroaching on its Infiniti line's territory. It speaks well for the Armada's fit and trim that it is so comparable. 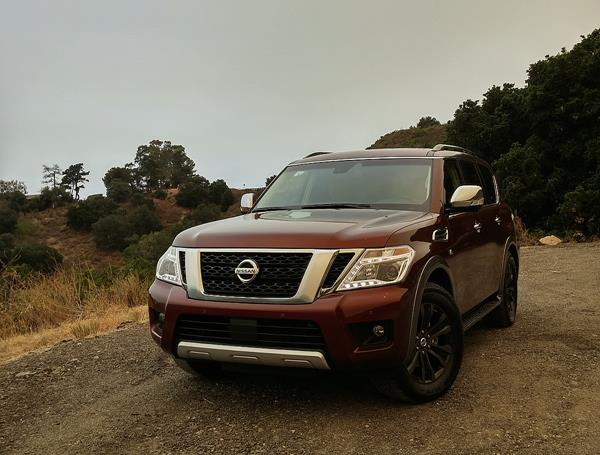 Competition in the full-sized SUV segment is strong, but the Armada seems to be setting new benchmarks for others to meet. The Chevrolet Tahoe and its GMC Yukon twin are the best-sellers here and, frankly, now seem a bit outclassed in many respects. The usable third row and smooth road drive of the Armada are definite sellers, but the GM twins offer more cargo.

The Ford Expedition is a close competitor to the Armada, offering similar all-around goodness and a better third row experience. Fuel economy is much better in the Ford as well, but looks may be the swing point for many Armada buyers and the higher power output of the engine is a strong selling point against the Expedition.

The all-new Armada was worth waiting for. The year hiatus for the model meant a host of improvements were made and now the 2017 Nissan Armada is a far more compelling and benchmark-setting offering than it has ever been.