The Mitsubishi Outlander is cleverly named. The word "Outlander" is a mashup of Subaru's Outback and Toyota's Highlander. Both are the top sellers in their sub-segments of the broader crossover marketplace. We found the 2017 Mitsubishi Outlander mashes up the features of these two winners to create something no other automaker offers.

What sets the compact Outlander crossover apart from most of its peers is its optional V6 engine and its temporary-use third row of two seats, making it a five-plus-two passenger vehicle. V6 engines are all but gone from compact crossovers, and only the Nissan Rogue offers a vehicle near this size and price with a third row for occasional kids' use.

The 2017 Mitsubishi Outlander is now in its fifth model year. Along with many years of production usually comes reliability and a lack of small issues. However, the compact crossover market is now very competitive. Vehicles like the Nissan Rogue and Honda CR-V are tempting alternatives that feel more modern due to recent updates.

Our test vehicle was a V6 all-wheel drive Outlander GT with the only option package available: the GT Touring trim. The sticker price, including the $920 destination fee, was $34,135. This price is close to the top trims of the Honda CR-V and Nissan Rogue, but below some trims of the Ford Escape and Subaru Forester XT, which offer powerful turbocharged engines.


What We Love About the 2017 Mitsubishi Outlander GT:


What We Don't Love About the 2017 Mitsubishi Outlander GT:

The 2017 Mitsubishi Outlander is a handsome crossover. Although relatively narrow, it appears long in a side view. The design team didn't make any mistakes but played it safe. The Honda CR-V, by comparison, looks busy with added curves and corners that serve no apparent function. The Outlander does seem to hint at the current Subaru Outback wagon design and also has a look owners of older Highlanders will recognize.

What is obvious from the exterior view is this is not a big crossover like the current Honda Pilot or any other three-row crossover. The Outlander is right-sized for those that need a five passenger vehicle with the flexibility of an added pair of seats for unusual circumstances. Thank goodness someone still recognizes that real-world need. 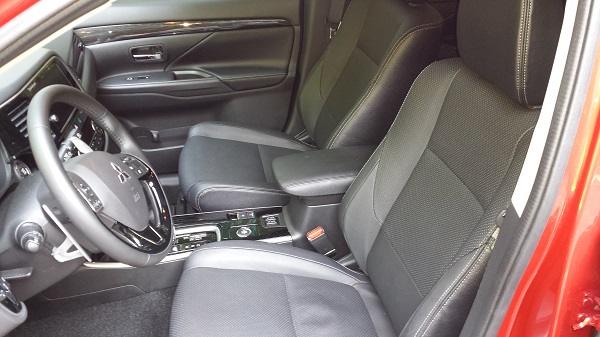 Regardless of what the specifications about interior volume say, hop into any compact crossover and any 6-foot adult will feel cramped in the width of the leg area. In an attempt at styling, or to pack in as much console space as possible, the majority of vehicles in this class require that many tall passengers rest the outsides of both knees against hard plastic. The Mazda CX-5 has long been the worst offender, but it is not alone. Even the larger Mazda CX-9 has a cramped leg area. The Subaru Forester also has this design. However, the Mitsubishi design team cut away the right knee area of the console so that leg room can be much more comfortable for taller drivers. On long trips, this is a huge aid to overall comfort.

Like all compact crossovers, the Outlander has plenty of space for the front passengers and rear passengers at the same time. Adults can ride comfortably in the rear outboard seats without the front adults needing to move up their seats. Three kids can fit in the second row as well.

The third row is not designed for adults, nor is it designed for full-time child use like a minivan is. Rather, it can pop up for those carpool days when it's your turn to take the neighbor's kids along with your own to soccer. Mitsubishi did an admiral job of packaging that third row, so it doesn't rob too much cargo space when stowed. The middle row also folds totally flat so cargo area is maximized. Best of all, there is a compact spare tire under this three-row compact crossover.

We did notice one odd thing about the ergonomics in our Outlander GT. The steering wheel tilt and telescope seems limited in its ability to move toward the driver. As a result, we had to move the seat forward more than we liked.

Mitsubishi includes perforated leather seats with heat for the front passengers at this price point. The feel of the leather seats was slightly better than average. The seats were also comfortable overall, but there was no lumbar support adjustment we could locate, which cheapens the perceived quality. The seats also didn't seem to be as solid and securely affixed to the floor as they should have been. We've noticed this in other Mitsubishi vehicles. The manual-adjust rear-view mirror was also loose on our brand-new tester. Small things that add up. Countering those was a heated steering wheel, which goes a long way toward making any vehicle feel like a premium model.

One very cool thing Mitsubishi does is include a button that lets the driver toggle the AWD system between Normal, AWD Eco (2WD unless needed), Snow and Lock. We tried Eco, Normal and Lock on muddy dirt roads and we thought we could feel a subtle difference. Lock seemed to eliminate any starting wheel spin. Mitsubishi calls its AWD system Super All Wheel Control. We won't argue that it doesn't live up to that bold title.

The infotainment system in the Outlander GT left us conflicted. The 7-inch screen seemed small compared to what we have become used to, particularly when we used apps that seemed to have a border around the edges. The Outlander line doesn't seem to offer factory navigation at any price point either. However, Apple Car Play and Android Auto are included, and we put Android Auto to full use. We used Google Maps with Navigation and Pandora throughout our testing and were glad that Mitsubishi is one of the smart automakers who has embraced this fantastic free technology. That said, in rural New Hampshire where we conducted our week of testing, there was often no cell phone signal, and we would lose Pandora, and the map would stop functioning. Factory navigation, which uses GPS, is more reliable in such a situation.

The Rockford-Fosgate premium audio with nine speakers sure looked powerful. There is a huge woofer in the rear cargo bay side wall. However, we would rate it only slightly above average for affordable crossovers. (Maybe the fancy name set our expectations too high?)

Mitsubishi is one of the many automakers who now include surround-view monitoring, as well as a rear camera. This view is helpful when maneuvering and we used it frequently when parking and backing into tight spots. The rear-view camera was made muddy by the dirt roads we were on, but only VW has a workable solution for that bugaboo (the camera is hidden by a mechanical logo when not in use). 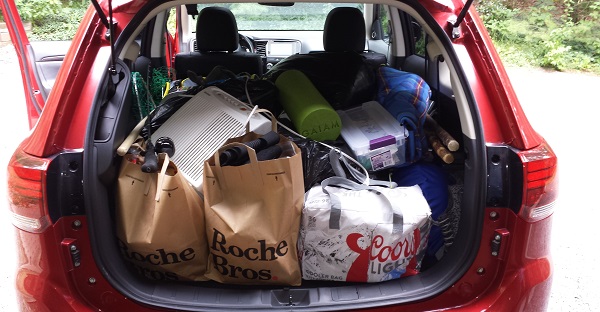 The 23 mpg combined EPA estimate and 20 city/27 highway are much lower than the CR-V, which leads this class. Mitsubishi also recommends premium fuel, which pushes the Outlander GT's annual fuel cost estimate by the EPA up to $1,900. That is $350 more per year than the Ford Escape 2.0-Turbo and $150 more than the Subaru Forester XT 2.0-Turbo. However, in our testing the Outlander rocked a 28.7 MPG rating overall - which we measured at the pump. That included a lot of highway and rural driving, but we were impressed nonetheless. 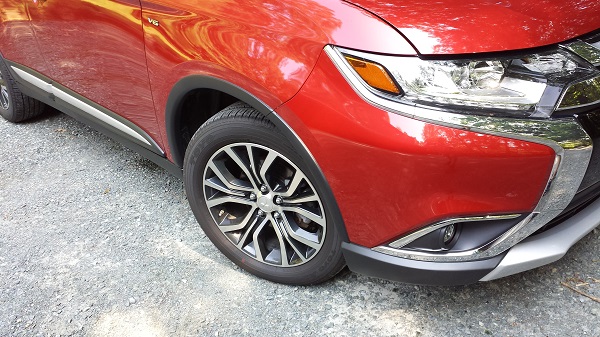 In its 2017 Initial Quality Survey, JD Power ranks Mitsubishi fourth from last in initial quality. Only Volvo, Jaguar and Fiat were lower. Consumer Reports gives the 2017 Outlander three out of five stars for reliability. That is a Yellow ranking, below the Green many of the top compact crossovers in this segment earn. Subjectively, we feel those rankings are not unfair.

The 2017 Mitsubishi Outlander earns the coveted Insurance Institute for Highway Safety's Top Safety Pick+ rating. It scored Good on all its crash tests, Superior in its active safety system evaluation, and has Acceptable-rated headlights with automatic high-beams. That puts the Outlander right at the top of the compact crossover safety ratings list. However, not all Outlanders earn the top rating because active safety is optional and is only offered on the top three of seven trims. For 2018, Toyota, Nissan and Mazda will offer this technology at no added cost on all trims of their competitive models.

Our GT trim did have the optional systems, and we give them high marks. In our week of driving, we only had one false forward collision warning (which is good). The automatic emergency braking never actuated when we were driving, but we did use the adaptive cruise control quite a bit, so we know it was there watching for trouble. The lane departure warning system on the Outlander, like on many vehicles, was annoying to the point that we shut it off. Stray even close to any lane marker and a series of chimes scold you. In rural areas, crossing the middle line to avoid pedestrians is constant, so the squawk of the LDW system is also constant. It can be turned off. However, it turns itself back on when you restart the vehicle.

The rear cross traffic alert worked very well when we would park and then have to back out in traffic. Blind spot monitoring is also included, but from our point of view, there are no blind spots in the Mitsubishi Outlander. Visibility is great. 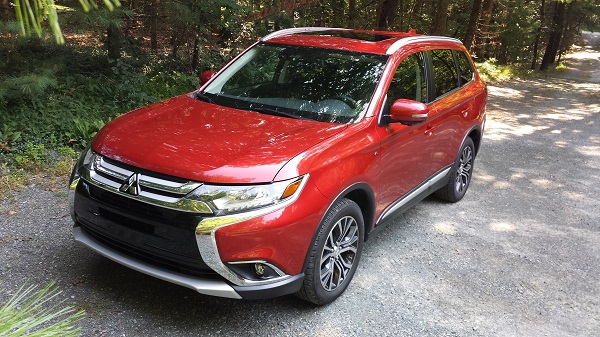 Performance is very important in some segments, but not so much in the affordable compact crossover market. We rate the engine and transmission in the Outlander GT highly. The 224 hp of the V6 was pretty much ideal and delivered smoothly by the 6-speed transmission. Lower trims of the Outlander make due with a 166 hp 4-cylinder engine and constantly variable transmission. The V6 does not make the Outlander fast relative to its peers in the segment, but it is definitely never slow. Frankly, it is just right.

Handling was a bit below average in terms of steering feel and responsiveness. The new CR-V and other crossovers at the $35,000 price point are excellent on-road, and we would not go that far in grading the Outlander.

Ride comfort is also not a strength of the Outlander GT. It felt nervous over bumps and washboard sections of dirt roads would get it vibrating and dancing in a way that felt cheap. We drove a 2016 Subaru Forester 2.5i Premium on-road back-to-back with the Outlander, and it felt much more refined and sporty. We also drove a 2014 BMW X3 base trim on dirt roads back-to-back with the Outlander. Now, this is not really a fair fight since the BMW cost about $10,000 more three model years ago. However, the contrast was almost shocking. The BMW felt poised and steady; the Outlander just didn't measure up to that unfair test.

Where the Outlander GT did well was slow-speed soft-roading. When the dirt roads got choppy and the hills were steep, muddy and rutted, we slowed down, and the Outlander's AWD system used all four corners to put the power down admirably.

Value is the Outlander GT's top strength. There is a lot of vehicle here for the money. Possibly more than any other brand offers in this segment. Factor in the third row and the Outlander is clearly ahead of the pack in terms of bang for the buck. The $24,000 base trims of the Outlander are also among the least expensive three-row crossovers for sale in America. Will resale value negate some of this value? Perhaps, but when we used the build tool on Mitsubishi's website, a message popped up offering us a $2,000 discount off our best deal. So Mitsubishi wins on value in this popular type of vehicle.