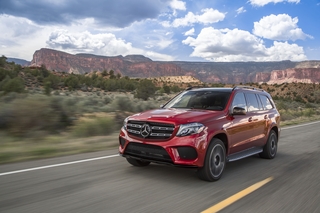 The 2017 Mercedes-Benz GLS-Class is a beautiful, big luxury SUV with three full rows of adult-friendly seating and an excellent drive dynamic in four levels of engine option appeal.

Taking over from the GL-Class, the GLS is a mid-cycle refresh of that SUV. It adds the S to its name to denote its uber-luxury on par with the S-Class sedans in Mercedes' line, getting a bit of a facial change and a new transmission. Inside, a few changes to the infotainment are found as well.

This big luxury SUV is a fun drive, but there are a few things that some Americans might find lacking here. For the most part, those who love German luxury will adore the big 2017 GLS.


What We Love About the 2017 Mercedes-Benz GLS: 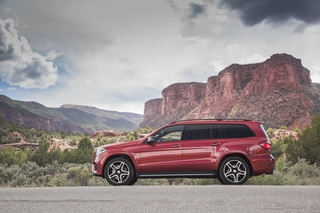 The new name for the 2017 Mercedes-Benz GLS-Class comes with a new style too. A few changes to the front fascia and rear end give the new GLS a sleeker look to go with its new S-Class aim. The GL was a pretty SUV already, but these changes make the new GLS changes very sharp.

The GLS-Class begins with its large-mouthed front fascia that has an open Mercedes-shaped grille inside which two slotted bars run parallel to one another, centered by a large Mercedes-Benz 3-pronged circle. Underneath the grille is another large intake, separated by a thin bumper line. Sport-themed cutouts to either side of that house hidden fog lamps inside black bezels.

The hood of the Mercedes-Benz GLS is low and fast-moving toward the windscreen, adorned only with simple lines to denote movement. These are mirrored by lines along the body that give the GLS a fast-paced appeal, accented by strong rear fender bulges for added muscle. The greenhouse and its pillars are all blackened so that only the front and rear pillars have body coloring.

The rear spoiler above the hatch, sizable rear bumper and tail lamps that mimic the sharp angles of the headlamps finish the look. It's a great style that is immediately appealing to all who see it. One of the best-looking SUVs you can find. 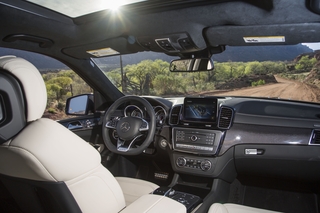 Everything in this high-class Mercedes-Benz SUV is beautiful and well-made. There are some points that speak to both the GLS' German roots and its not-quite-American focus that cause us to give it a less than perfect score. Controls placement and some materials choices compared with other high-end vehicles, such as the S-Class upon which this GLS is supposed to take its newfound muse.

The dashboard is busy but not cluttered. The myriad of buttons can be intimidating until their redundant nature is realized. A large 8-inch infotainment screen sits atop the central dashboard, with a flat panel of buttons centered by a knob where most of the infotainment and audio controls are. The right-hand set of buttons are numbers arranged as a telephone keypad — useful for dialing but not much else. Climate controls are on a panel below the central rectangle. The Komand knob for the infotainment sits ahead of the armrest on the central tunnel and provides a touchscreen and large knob for control. We noted that bumping it while driving was not uncommon, but you can get used to its placement and adjust your armrest use on the center storage bin accordingly.

Instruments for the driver are very well done and easy to read, sitting in deep bezels with a sporty cock to them. Of note is the odd placement of the cruise control knob on the left side of the steering wheel. It's almost impossible to see without bending forward and craning your neck (taking your eyes off the road) and is easily confused with the turn signal dongle directly above it. More than once we set a turn signal instead of resuming cruise control during our drives.

Seating throughout the 2017 GLS is excellent. Some may have issue with the tall, thick thigh bolstering of the AMG model, requiring the driver and front passenger to climb up and over to get in. The second row is very adult-friendly and accommodating, with plenty of room and comfort. The third row is also surprisingly adult-usable with unusually good thigh support for a third row offering.

Cargo space sits at 16 cubic feet behind the third row, 49.4 cubes with the third row folded, and a huge 93.8 cubic feet with both rows folded down. That space is usable, for the most part, and includes thoughtful tie-downs and a retracting cargo cover and removable net. The GLS does sit fairly high, so the loading deck is a bit higher than might be found in an average crossover.

A larger 8-inch screen replaces the 7-inch found in last year's GL model. The infotainment is otherwise the same, with just a few tweaks for the new model year. The Mercedes-Benz system is one of the better ones that we've used, with a great array of usefulness and a responsive, easy-to-navigate menu system. We like the Komand knob interface and the speed with which addresses can be entered into navigation via the keypad numbers and over-knob touch plate. We also like the quick buttons built into the wrist rest and below the screen in the audio controls.

Upgrades available in packages for the GLS-Class can include added things like navigation with real-time traffic, voice controls, Apple CarPlay, etc. The voice controls in the Mercedes-Benz GLS are good, though we've seen better. Luckily, intuitive use of the knob controller makes voice control secondary in most cases anyway. 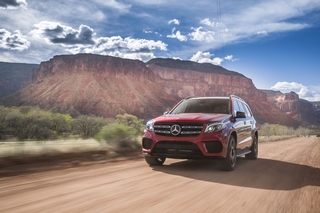 In a vehicle like the GLS SUV, fuel economy is often a secondary concern to the buyer. Still, the numbers returned with this vehicle are relatively low for the luxury SUV segment. The GLS is segmented into three models, each of which has a different engine and thus a different EPA rating.

The AMG GLS 63 lands at 14 mpg combined, with 13 in the city and 17 on the highway. Our time in the latter proved those numbers largely correct, with our average MPG coming in at 15.5 mpg combined after 454 miles of driving all told, much of which was on the highway.

There is little to go from with respects to expected reliability for the 2017 GLS. Previous models have had only average ratings and our experience with occasional glitches to the vehicle's electronics (namely the keyfob and rear backup camera) were not out of the norm for this generation of the SUV.

We expect solid reliability from the drivetrain and engines, given Mercedes' history in that regard.

It's difficult to make safety estimates for the 2017 Mercedes-Benz GLS, but we rank it slightly higher than average due to its size and the myriad of available passive and advanced safety options it has. In this generation of the GLS, no crash testing by either the National Highway Traffic Safety Administration nor the Insurance Institute for Highway Safety has been done. 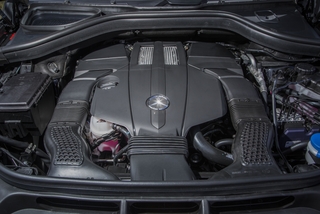 It's hard to ignore the fact that the Mercedes-Benz brand is generally performance oriented. The 2017 GLS is definitely that, with three engine options, which return increasingly higher levels of performance. No matter the engine chosen, the towing capacity of a properly equipped GLS is a solid 7,500 pounds.

The base engine for the GLS is in the GLS450 as a 3.0-liter turbocharged gasoline V6 that outputs 362 horsepower and 369 pound-feet of torque. A 9-speed automatic transmission and all-wheel drive are standard.

The high-end AMG GLS 63 model has a massive 5.5-liter V8 that roars with 577 horses and 561 foot pounds. A 7-speed automatic and AWD are mated to that. Our week with this monstrous engine showed that the large fuel tank it comes with is a must, given its fuel-sucking, but the performance output for speed and fun are well worth that. This is one of the fastest, most muscular and well-handling SUVs we've ever tried.

There is also a diesel version of the GLS that will be available later in the year. This is a 3.0L turbodiesel outputting 255 horsepower and 455 pound-feet of torque.

The Mercedes-Benz GLS performs very well on the road, handling beautifully and with a presence much smaller than its actual size. Maneuverability is good and visibility is also very good for this class. We thoroughly enjoyed the surprisingly comfortable and fun drive experience that this big SUV offers.

Pricing and value in the luxury segment is, of course, entirely subjective. The base price for the GLS is on par with many executive sedans, and the AMG model we drove was priced near the average selling price of an American home. That said, buyers at this level are not likely swayed by those large tags nor the poor fuel economy returns of this sport utility.

Low resale values for the Mercedes-Benz brand in general and the luxury market overall are not indicative of any sort of expected ROI with the GLS.

But most of this is countered by the fact that buyers are not likely going to judge any of these as points definitively against the 2017 GLS. 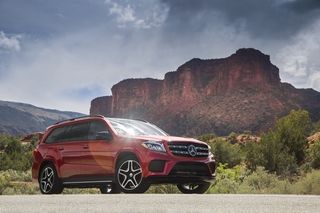 Finding a direct competitor for the 2017 Mercedes-Benz GLS-Class is difficult. The closest options are the Audi Q7, which is really a class down from the GLS, and the Infiniti QX80. The QX80 is likely the closest you'll find to the big Mercedes, but it doesn't offer the engine choices or extremes of luxury that the GLS has. In its favor, the Infiniti does have a more Americanized appeal to its interior comfort and overbearing presence.

In the end, the 2017 GLS is very much in its own realm. This huge luxury SUV is one part posh, one part German muscle and part egocentric. It's thoroughly enjoyable and can be powerfully entertaining to drive. If the price tag doesn't throw you, there is no reason to overlook the 2017 Mercedes-Benz GLS-Class.