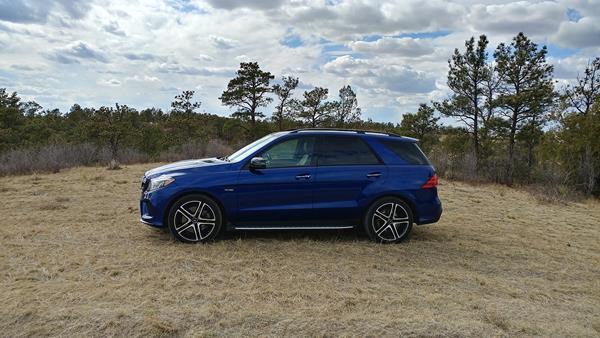 The luxury crossover-SUV markets are exploding and becoming very contentious. The 2017 Mercedes-Benz GLE-Class offers a good mix of package choices, engine options, interior refinement and on-road excellence. With seating for five adults and good cargo, the GLE-Class remains a favorite in the luxury SUV market.

There are six models to choose from in the GLE lineup, which replaces the M-Class of previous years. Each model is noted by its engine, starting with the base GLE350 and working into the turbocharged GLE400 and GLE43 models then to the V8-powered GLE63 and GLE63 S options. The plug-in hybrid GLE550e finishes out the lineup, though hints at a possible diesel-powered option for the US market have been made.

There are a host of standard features included with the base level 2017 GLE-Class. The excellent exterior look of the crossover is enhanced with LED lighting and an integrated roof rack. Inside, dual-zone climate, premium seating and an 8-inch infotainment screen are also standard. Along with many other items. Packages then expand those inclusions with several things that can both personalize and enhance the GLE-Class throughout its model upgrades.

The 2017 Mercedes-Benz GLE-Class has a lot going for it and is one of our favorites in the luxury crossover markets.


What We Love About the 2017 Mercedes-Benz GLE-Class:


What We Don't Love About the 2017 Mercedes-Benz GLE-Class: 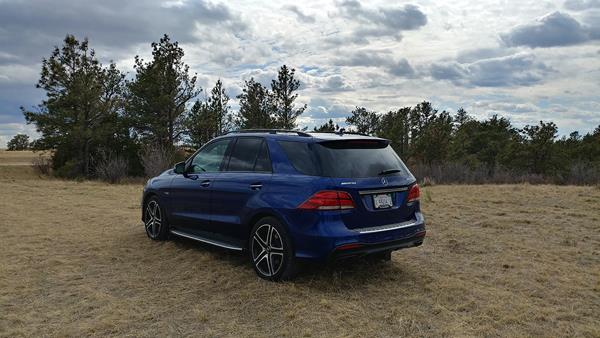 The 2017 Mercedes-Benz GLE is one of the best-looking luxury sport utilities on the market. Classic Mercedes lines and Benz detail create a good combination of Old World refinement and modern sleek. The grille is dominated by the three-pointed Mercedes-Benz star flanked by thin chrome lines running horizontally across to either side. The headlamps mimic the grille's shape, continuing it into the front fenders.

Below the grille is a large scoop and two bezels for fog lamps. Above the grille is a classic Mercedes-Benz hood with its edges indented to accent the fenders and with two ridges running along the middle to create a hint of German muscle. Upper vents at the top of those ridges add to that feel before the raked windscreen takes over.

Along the sides, the bodywork has two major creases that run toward one another subtly to create a sideways-V of motion and a thick beltline. The rear hatch has a rounded set of corner windows that leave the rear pillar ahead and angled forward to keep the appearance of motion intact.

At the rear, the GLE has a V-shaped center to its hatchback, with a spoiler at top and a large bumper step at bottom. The tail lamps mimic the look of the headlamps, but in reverse, creating a symmetry to the front and rear fascias.

The 2017 GLE-Class is a beautiful crossover-SUV with a lot of styling that marks it not only as definitively Mercedes, but also strongly luxurious and European. 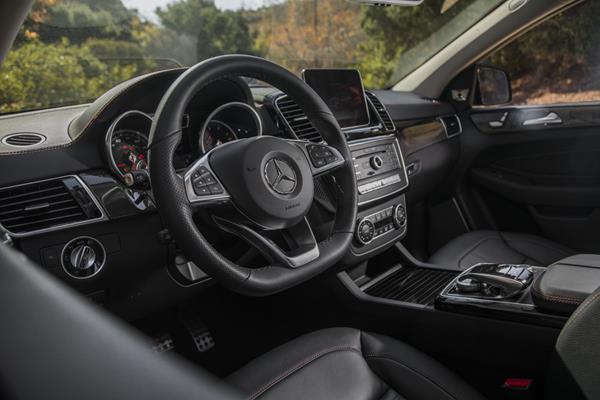 The interior of the 2017 GLE-Class is top shelf. Materials quality is excellent and the cabin's design is very well done. As would be expected of a Mercedes, the interior of the GLE is both Germanic simplicity and high European luxury. The interior takes much of its design cue from the M-Class, which the GLE-Class replaces in the Benz lineup.

Seating is high, comfortable and nicely bolstered. This includes the rear seating, which is very spread out and comfortable, even with three across. The AMG models include excellent sport bolstering while the other models for the GLE are less aggressive about the bolsters, but include a little more padding for greater comfort. For parents, the heavier bolstering of the AMG models will mean child safety seats are much more difficult to install. There is almost no transmission tunnel thanks to the high seating position, so legroom is good throughout the cabin.

Higher trims include a beautifully quilted leather option and very refined burled wood trim work. These are ultra-lux additions that make the Mercedes-Benz GLE-Class stand a bit above the rest. The massaging seats are also a premium touch many might consider, but we found their massage to be less than expected when compared with some other premium makes.

Cargo space in the 2017 GLE-Class is very good at 38.2 cubic feet with the rear seats up and 80.3 cf with them folded. The second row folds truly flat and the load height is not too high and the rear hatch is wide and tall, making loading some bulky items a bit easier. With the rear seats down, a full-sized adult bicycle easily rolls into the back without tires being removed.

A myriad of package options can be had for the GLE, depending on the model chosen. These escalate the price of the crossover quickly, but can add some very premium options. They include two premium audio upgrades, either harman Kardon or Bang & Olufsen, tri-zone climate control (to replace the standard dual-zone), a panoramic sunroof and adaptive suspension choices. 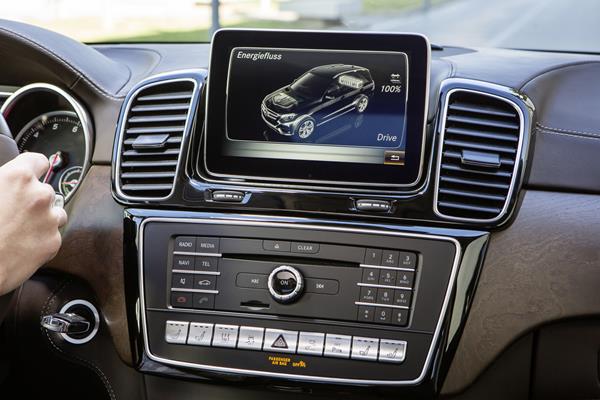 The Mercedes-Benz line uses the automaker's COMAND system, which is operated through a COMAND knob located just beside the gear shifter and just ahead of the driver's arm rest on the GLE-Class. A large, central screen displays the interface and options and the user interacts by spinning the control knob, pressing down to select and sometimes through touchpad interactions with the COMAND knob's cover.

The COMAND system's 8-inch display has excellent graphics and a clear look that rarely receives any glare.

The COMAND interface is somewhat complex and intimidating at first, but regular use quickly reveals an easy learning curve for the basics. Users may find the myriad of customization options to be confusing, but these are entirely optional and can be ignored or used to make the infotainment more tailored towards the user. Apple CarPlay and Android Auto are new integrated into the COMAND interface in the GLE-Class, upping its usability.

In the plug-in hybrid GLE550e model, the infotainment display also becomes the vehicle information display to show charging status, options, and power usage. Option such as driving mode and other things are redundant with the physical controls elsewhere in the cockpit. 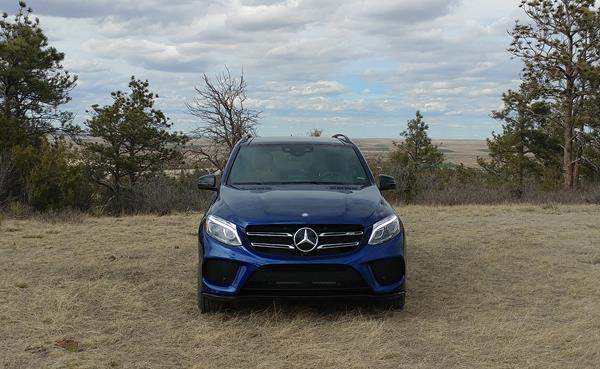 Fuel economy in the 2017 Mercedes-Benz GLE-Class is below average in almost all model options, with the obvious exception of the plug-in hybrid. The GLE350 base model is EPA-rated at 20 mpg combined in rear-wheel drive, with 18 mpg in the city and 23 mpg on the highway. Going to all-wheel drive drops those numbers to 19 mpg combined (18 city, 22 highway).

The GLE550e plug-in hybrid is capable of up to 18 miles of driving in all-electric mode and has an EPA rating of 43 MPGe when fully charged and 21 mpg combined otherwise.

The 2017 Mercedes-Benz GLE-Class has a history of reliability and this year's J.D. Power and Associates Vehicle Dependability Study rates it as "Better Than Most" for expected reliability. All recalls to-date have been for safety items such as airbags and lighting.

The 2017 GLE-Class has received good safety ratings from the crash tests performed so far. The National Highway Traffic Safety Administration (NHTSA) has only published rollover results for the GLE, marking it with four out of five stars.

The Insurance Institute for Highway Safety (IIHS) has given the Mercedes-Benz GLE-Class a full suite of tests and awarded it with the top IIHS honor of Top Safety Pick Plus. This rating means that the GLE received top scores of "Good" on all crash testing, as well as for its advanced safety options. 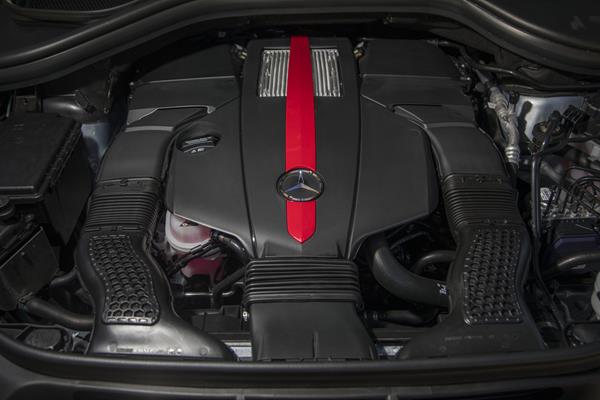 The base engine for the GLE-Class is in the GLE350 as a 3.5-liter V6 that outputs 302 horsepower and 273 foot pounds of torque. A 7-speed automatic transmission is standard, as is rear-wheel drive. All-wheel drive is optional with this model. Acceleration is about average for the segment and while the engine is strong enough to motivate the GLE well, it's not spectacular in any metric, including fuel economy. Towing is rated at 6,600 pounds when properly equipped.

The GLE400 (also the GLE43 AMG) is powered by a 3.0-liter V6 turbocharged to 329 horsepower and 354 lb-ft of torque. A 9-speed automatic transmission and AWD are standard and a low-range transfer case with 4WD is optional.

The GLE63 has a beefy 5.5-liter V8 under its hood, growling out 550 horses and 516 lb-ft of torque. This engine runs through a 7-speed automatic transmission. The super-tuned GLE63 S takes that same engine and boosts it to 577 hp and 561 foot pounds, with the same transmission. The GLE63 is capable of 0 to 60 mph sprints of 4.3 seconds, while the S model shaves off a tenth of a second from that time.

The plug-in hybrid model for the 2017 Mercedes-Benz GLE-Class is the GLE550e, which combines an electric motor to the 400's 3.0-liter V6. A 7-speed automatic transmission brings this together for a total system output of 436 horsepower and 479 lb-ft. About 114 of those horses are from the electric motor, which means that this model can run from 0 to 60 mph in about 5.5 seconds, according to Mercedes.

Towing in any of the GLE-Class crossovers, except the GLE350, is rated at 7,200 pounds when equipped.

During our week in the 2017 Mercedes-Benz GLE43 AMG, we found that power delivery and sport driving fun were all an integral part of the GLE's design. This became one of the better crossovers we've driven in the European luxury class.

Everyday driving is smooth and easy, with plenty of power to give confidence in the merge or the pass. Around town the GLE is maneuverable and easy to park, with a fun presence out of the light or jumping forward from a stop sign. 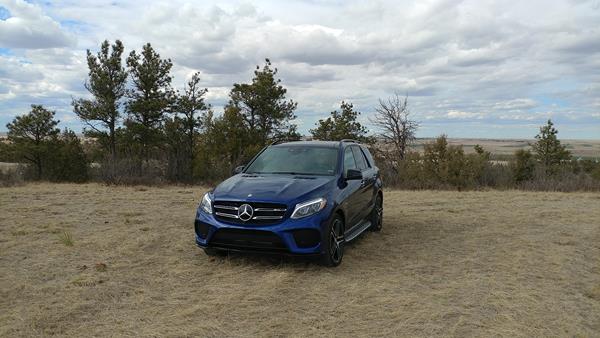 The Mercedes-Benz GLE-Class is the third best-selling luxury crossover in its class, so it tends to hold value a bit better than do most of its contemporaries. Knowing that, we also note that the base price for the GLE is significantly higher than the segment's average and the upgrade packaging prices can quickly escalate from there.

Most buying in the base model will likely price it above the base level at around $55k with delivery. The GLE400 and GLE43 models are most popular, and will be priced closer to $80k with popular packages added. That price disparity means that finding good value in the GLE-Class is going to be both subjective and difficult.

We suspect that of the GLE-Class models available, the plug-in hybrid GLE550e will have the best value retention of the group. This is due to the high demand in the luxury segments for hybrid options in many US markets, especially on the West Coast.

In the midsize luxury crossover segments, there are a lot of options to choose from. Sport utilities in this category are generally differentiated by a bent towards luxury or a bent towards sport. The GLE-Class is one of the sportier options, but does not skimp on luxury when compared to other sports-centric options such as the Porsche Cayenne or BMW X5. That said, there are more luxurious options, such as the Lexus RX series and the Jaguar F-Pace. One of the best offerings in this segment is the Volvo XC90, which has won multiple awards for excellence.

The 2017 Mercedes-Benz GLE-Class offers a lot to the consumer, not the least of which are a nice suite of engine options and a great number of packaging choices. Unlike many in this luxury class, the GLE can be customized through these choices.

There is a reason for the GLE-Class being a high seller in the luxury crossover segments and we don't blame people for loving this great Mercedes.