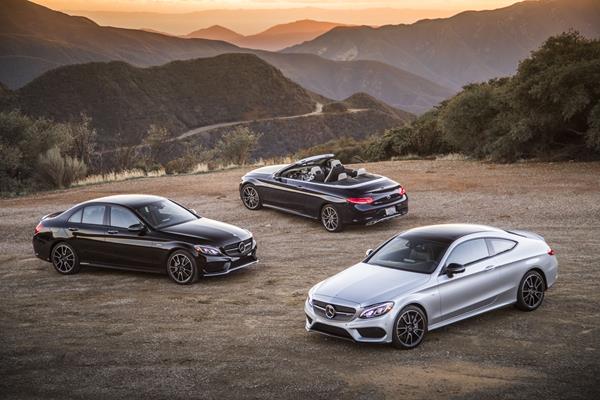 The 2017 Mercedes-Benz C-Class has been redesigned from its previous generation to offer more luxury, style and performance. Offered as a sedan, a coupe, and a cabriolet, the C-Class includes some compelling value for the class. We are especially enamored with its beautiful interior styling and eye-grabbing exterior looks.

The sedan was introduced as a redesign two years ago and is now followed by the coupe and convertible options. The C450 has changed its name to the C43 middle-option trim. Each of the C-Class trims has a different powerplant included. The C300 is the base model with a turbocharged 4-cylinder that really pushes the car well. The C43 has a turbocharged V6, and the C63 and C63 S have a throaty V8. Both rear-wheel and all-wheel drive are available for most models.

We spent a week in the C300 coupe and greatly enjoyed the spirited nature of the swooping little two-door. The sedan models are equally fun, though more practical, and fuel economy doesn't change much between the three body styles.

The newly redesigned 2017 C-Class is a very competitive car that may become a best seller if others in the market don't sit up and take notice.


What We Love About the 2017 Mercedes-Benz C-Class:


What We Don't Love About the 2017 Mercedes-Benz C-Class: 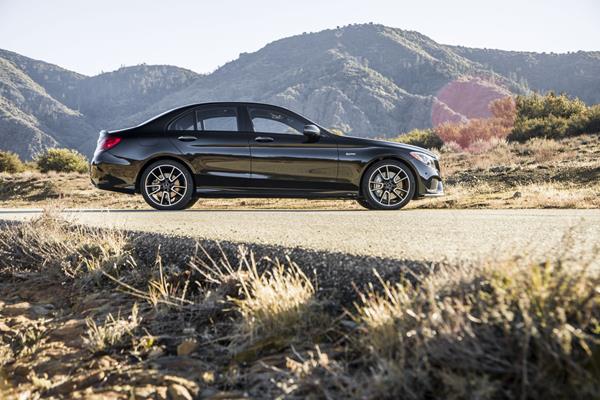 The 2017 Mercedes-Benz C-Class has very elegant styling and, as the midsize offering in the Mercedes lineup, it's similar to but not identical to the S-Class above it. The C-Class has more speed-centric, swooping style along the lines of the most recent Mercedes-Benz cues.

The 2017 C-Class sedan has a long arc that defines its design, peaking at the central pillar and swooping forward toward the grille, and rearward toward the tail lamps. The 2017 C-Class coupe is similar, with the peak being at the central pillar and door handles, but with the arc being a little more well defined because of the coupe's shorter length.

The Mercedes-Benz grille on the C-Class is large and rounded, with the big three-point emblem dominating its center. Large wheels open up the fenders and a sloping hood accentuates the fast-paced roofline and raked windscreen.

The entire design of the 2017 Mercedes-Benz C-Class is about curvature and the car definitely has it going on because of that. It's uniquely Mercedes and looks good both standing still and in motion. 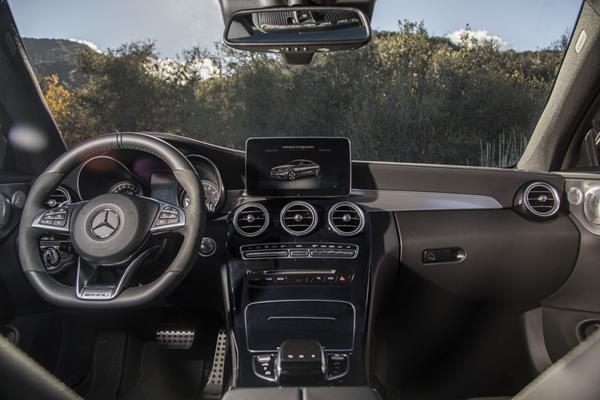 The interior of the 2017 Mercedes-Benz C-Class was the first design in the carmaker's Italian studio. It works to blend classic Mercedes styling with modern technology, and it does a respectable job of that. A few things still look out of place, like the large infotainment screen, but it's not as "last minute bolt-on" in appearance as you might find in older Mercedes or BMW designs.

The cabin of the 2017 C-Class is a little cramped, especially in the coupe, but it's not constricting. The big and tall will find the driver's and front passenger's seats to be adjustable enough for comfort, but difficult to get in and out of because of the in-built recline. The recline can be mitigated with seat adjustments, but then headroom becomes an issue. The rear seats of the sedan model are a good size for small adults and children, but will not hold tall people well due to the roof's sudden descent and the short amount of legroom. The coupe's rear seating is mainly for children.

Around the 2017 Mercedes-Benz C-Class cabin are found quality materials with excellent workmanship. The base line is a simulated leather the German automaker calls MB-Tex, which is actually very well done. An upgrade to genuine leather is available. In all models of the C-Class, the center console is cut from a single piece of wood veneer and the flowing use of materials and highlights matches the exterior's curvature well.

Some Mercedes-only nuances such as the seat adjustments being on the door and the odd placement of the COMAND interface knob near the shifter, where its touchpad upper deck is often swept by the hand when resting, take a little getting used to.

In all, the layout of the cabin is ergonomic. Especially in the placement of the infotainment screen, which makes it very accessible to the driver as it nicely avoids glare. One downside to the interior is road noise when at speed, thanks to the large wheels and sporty nature of the C-Class. We also were unimpressed with the costly upgrades required to get some amenities most would consider standard in the luxury class, such as adaptive cruise control. 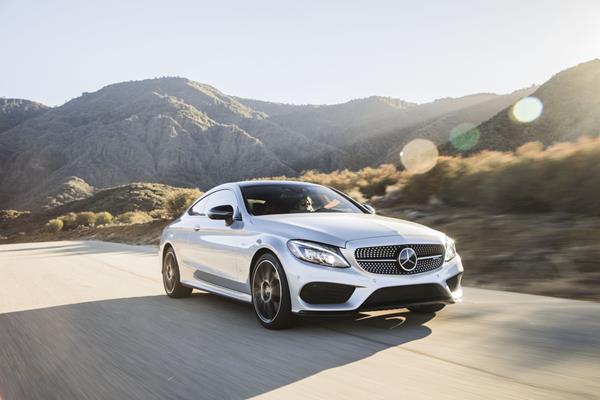 The Mercedes-Benz COMAND interface for infotainment is standard in the C-Class this year, but it isn't always the easiest thing to use. For most normal uses, the infotainment is simple and straightforward. Those looking to quickly tune the stereo, accept an incoming phone call, etc. will find the COMAND infotainment to be quick and easy.

It's in more advanced tech, like navigation and grabbing traffic updates (if equipped) that the COMAND knob and touchpad get a little hokey. The pad makes some things easier to do, accepting phone-like sweeps and pinches to move things on the screen, such as navigation maps, but it's not always clear when those should be used and it's easy to accidentally hit the star (home) button and find yourself starting over again.

Expect a learning curve with the Mercedes-Benz infotainment if you are advanced beyond just radio tuning and making phone calls. The voice command interface will not always be much help. 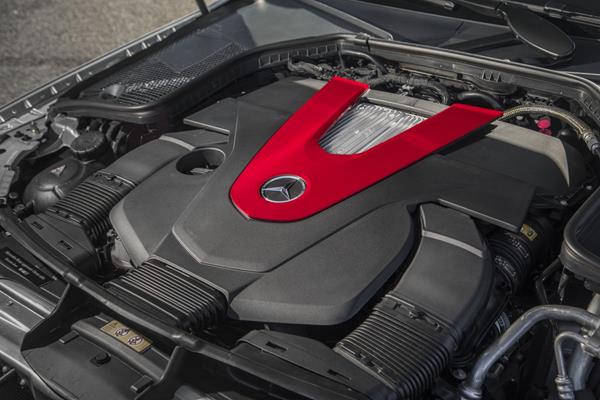 Fuel economy is relative when you're in the luxury realm and the 2017 Mercedes-Benz C-Class knows that. Most of its MPG returns are a bit below average for the segment, but Mercedes favors performance over economy with this car.

The C300 coupe model receives a 26 mpg combined average with 23 mpg in the city and 30 mpg on the highway. The all-wheel drive (4Matic) model drops a bit to 25 mpg combined, with 23 city and 29 highway. Surprisingly, sedans get slightly higher MPG returns.

The C43 performance model is rated at 20 mpg in the city and 28 mpg on the highway. The C 63 models at 18/24 city/highway. Coupe models are about the same in fuel economy with these two performance variants.

A bit out of the norm for many European luxury brands, the Mercedes-Benz C-Class has received a "Better Than Most" rating from J.D. Power and Associates in their Vehicle Dependability Study for the 2017 model year. An early recall for engine cooling on one of the engine variants for the C-Class has been recorded, but the car is otherwise blemish-free. 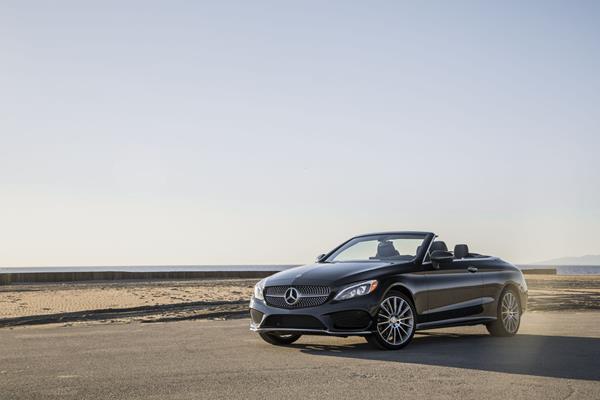 The 2017 C-Class has received high scores for crash safety from both the National Highway Traffic Safety Administration (NHTSA) and the Insurance Institute for Highway Safety (IIHS).

The NHTSA rates the 2017 Mercedes-Benz C-Class with a 5-Star overall rating, with four stars for frontal and rollover and five stars for side crash tests. Similarly, the IIHS has given the C-Class its Top Safety Pick rating with best scores of "Good" on all tests.

If Mercedes-Benz knows anything, it's performance. The base model C300 uses a turbocharged 2.0-liter 4-cylinder engine that outputs 241 horsepower and 273 foot pounds of torque. A 7-speed automatic transmission is standard, as is rear-wheel drive. All-wheel drive is an option with the 4Matic upgrade. Zero to 60 mph times in the C300 are possible in about 6.5 seconds for the sedan and a bit faster (maybe by 0.1) in the coupe and a bit slower in the convertible.

The C43 model upgrades the engine to a beefier, turbocharged V6 that displaces 3.0 liters, producing 362 hp and 385 lb-ft. A 9-speed automatic, new for this year, is standard and 0 to 60 mph times of under 5 seconds are possible with his car.

On the road, the sedan models are stately and well-mannered for regular driving, though the C63 can be a bit jumpy due to the big engine's need for speed. Highway driving is a breeze with a well-tuned transmission and excellent power no matter the engine option.

The coupe models are a bit cramped and offer more road feedback thanks to their shorter wheelbase. The C300 is a powerful little two-door with a lot of oomph for such a small engine. The other options for the C-Class each step up in power considerably. 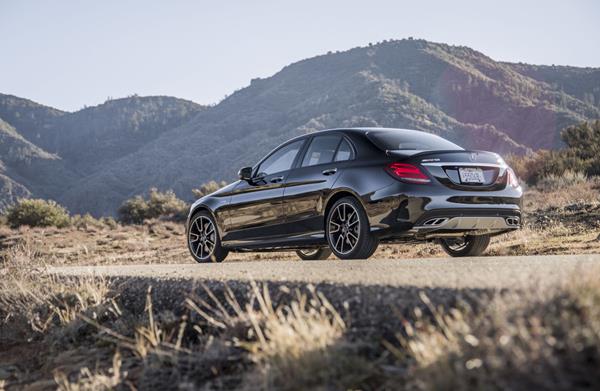 Value retention for the 2017 Mercedes-Benz C-Class is, like most luxury makes, only marginal at resale and trade-in. The car is considered high value for its luxury and accouterments, making it a good seller. It's the best selling luxury sedan in its class (as of this writing).

A big portion of the C-Class' appeal is its varied engine and model options, as well as its uniquely beautiful styling. In some markets Mercedes vehicles (especially sedans) retain much more value than is the average. The base model is a good buy for the price and the C63 performance models promise good resale returns.

There are several options for a buyer to choose from in the luxury sedan and coupe categories. Each has drawing points that make them compelling. Chief competition for the C-Class comes from the BMW 3 and 4 Series (sedan and coupe, respectively). The BMWs are a bit more sporty and less luxurious overall, but fare well against the C-Class for that reason.

Likewise, the Audi A4 is improved this year, but still falls short in luxury by comparison to the other two German makes. The sport-centric and fun Cadillac ATS and beautiful new Jaguar XE are also good contenders in this market. The Lexus IS and RC models are good competitors as well, but fall short in sportiness in comparison to the Mercedes' offerings. 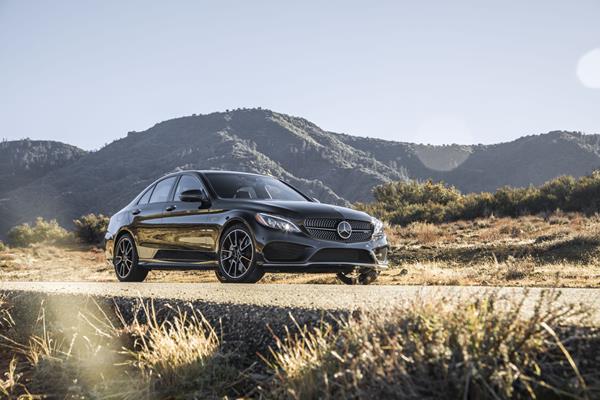 It is a competitive luxury market today, but the 2017 Mercedes-Benz C-Class is much better for the market than it's been before. With powerful German engineering and smart packaging, the C-Class offers a lot for the money and is poised to become a best seller for that reason.