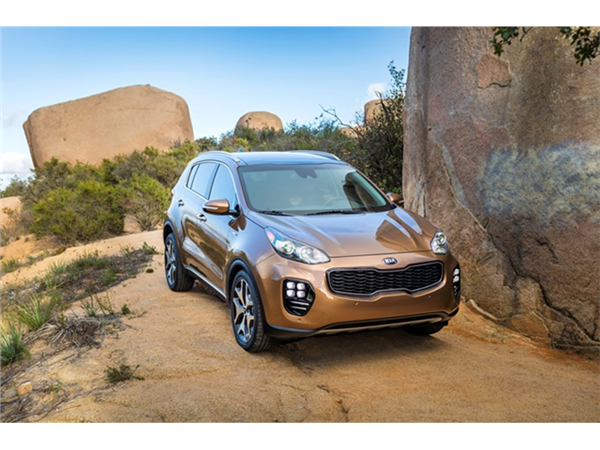 The 2017 Kia Sportage has seen a complete redesign for the new model year. This really pays off for the small crossover, moving it from middle of the pack to become a top contender in the market. The basic Sportage expectations are still there, including smart styling and high value. These have been augmented by fast-paced exterior looks, a much-improved interior experience, and two excellent engine options to choose from. The 2017 Sportage now has a broader appeal, but has managed to do so without losing its core fun factor and value-for-the-dollar roots.

Shoppers will note the great styling, bigger back seat, excellent engine choices, and the (surprisingly) better infotainment offering to be found in the Sportage. Add in an impressive array of safety equipment and available cool tech and you've got a very compelling choice in this segment. The 2017 Kia Sportage is a five-seat small crossover that's offered in three trim levels, each of which denote engine choice and accoutrements. Both front-wheel and all-wheel drive are available and an automatic transmission is standard. 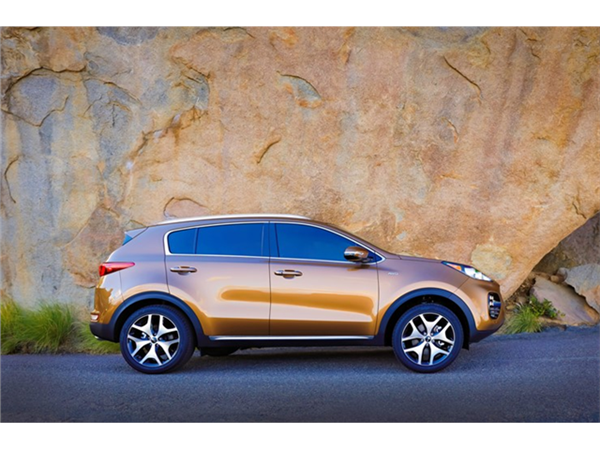 Without question, the 2017 Sportage is a great-looking little sport crossover. The Sportage has always had a certain visual panache and in the 2017 redesign, Kia put a lot of effort into enhancing that by building on the basic lines that made the Sportage popular in previous generations. The front fascia contains the signature Kia kidney-style grille, flanked by left- and right-pointing foglamp bezels and overseen by long, peering headlamps that flow back into the fenders to almost the mid-wheel point. These reside in raucous fender bumps that edge the hood, which is short and relatively flat. A highly down-angled windscreen and sharp pillars finish the front-end styling.

Along the sides, simple bone lines create curves in the door panels that accent the lightened beltline ridges and lower door cuts. This creates a slightly downward angle for the greenhouse that makes for a bit of a pinch in the glass as the roof angles in the opposite direction above. This gives the coupe-style illusion of forward movement and speed while allowing engineers to minimize the actual angle on the roof, expanding rear seat headroom. Finally, the wheels are pushed out to the corners and the rear hatch and bumper are smoothed and somewhat rounded to create a clipped-off appearance that accents the forward motion of the 2017 Sportage's design. It's a very good look overall that comes together to become one of the best-looking small crossovers in the segment. 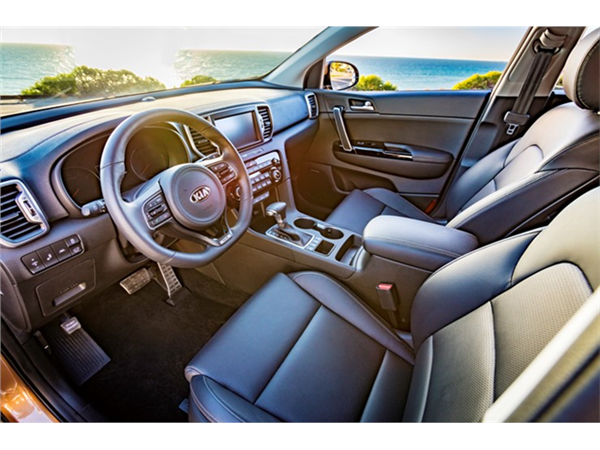 The interior of the 2017 Kia Sportage has also seen some impressive updating. The overall impression is of a much more upscale feel than has been seen in previous generations of the crossover. This begins with the more flowing dashboard with its higher-quality of workmanship and materials. The central controls all cant towards the driver, accenting the Sportage's namesake and purpose, while adding a lot of ergonomics to the layout. With the exception of the base LX trim, a touchscreen dominates the center of the dash and provides plenty of accessibility. Below and around that are well-placed and well-marked buttons and switches for hardware control of common items like audio and climate. This layout quickly becomes intuitive and minimizes the hunt-and-peck some over-done dashboards require.

Seating in the 2017 Sportage is very good with plenty of legroom, headroom, and shoulder room for the driver and front passenger. Unusual for this small class of crossover is the fact that the rear seats can boast the same, with full adults being accommodated in both of the outboard seating positions without cramping. The seating in the second row, in fact, can be more readily compared to upscale market crossovers than it can to the lower-cost crossovers that the Sportage is competing against. Cargo is good, though not class-leading. A full 30.7 cubic feet are found behind the rear seats - enough to tote a folded double stroller, golf bags, or three checked bags to the airport. Dropping the rear seats nearly doubles that space to 60.1 cubes. We note that the rear seats do not quite fold entirely flat, but close enough that most who need the extra space can utilize it easily.

The technology in the upper-tier Kia Sportage models in 2017 sees several updates from the previous generation, mainly in the Uvo telematics system. A 5-inch touchscreen adorns the base LX model with basic functions such as Bluetooth connectivity and satellite radio. The rest of the trim levels include a 7- or 8-inch touchscreen that has much better graphics and ease of use, as well as Apple CarPlay and Android Auto.

Our test model had the larger screen and the full suite of Uvo telematics to go with the navigation that comes with the larger screen. The Uvo system has long been one of the better infotainment offerings on the market and this latest upgrade sees more speed and better graphics output to the larger screens. Menus are intuitive, quick to respond, and useful. This definitely makes Uvo one of the better infotainment choices today. Uvo telematics is mainly about safety, covered below, but includes some items that parents will find useful. These include geo-fencing - sending alerts when the vehicle leaves a pre-defined area - and speed tracking, perfect for parents wary of their teenaged drivers when out alone. This is standard in the EX and SX Turbo trims. 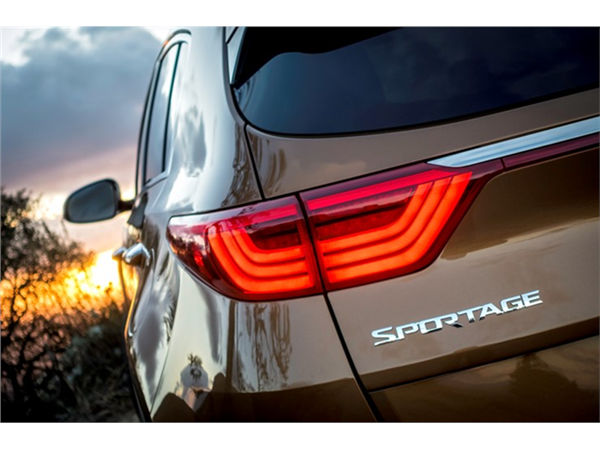 Our SX AWD test model returned 22 mpg overall in nearly 700 miles of driving. That's slightly better than the EPA estimate and included heavy highway usage for the vehicle. It's our opinion that the 2016 Sportage will likely meet or exceed its expected MPG ratings for most drivers, with the exception of the most lead-footed. Kia has been careful to low-ball its MPG estimates after the fuel economy controversy they had a few years ago. That usually plays in favor of the consumer.

Although there are no direct references for reliability and quality in the 2017 model Sportage, the Kia brand and Sportage models both enjoy a good reputation for reliability. Adding to that is the excellent warranty that comes with every Kia. We expect that the 2017 Kia Sportage will continue to show solid reliability.

So far, neither the National Highway Traffic Safety Administration nor the Insurance Institute for Highway Safety have published crash test results for the 2017 Sportage. The new Sportage comes with an impressive array of safety equipment, with some advanced features entering the trim line early on in the EX models. Given this and the relatively good track record Kia has for safety, we expect that the 2017 Kia Sportage will fare well in safety testing. 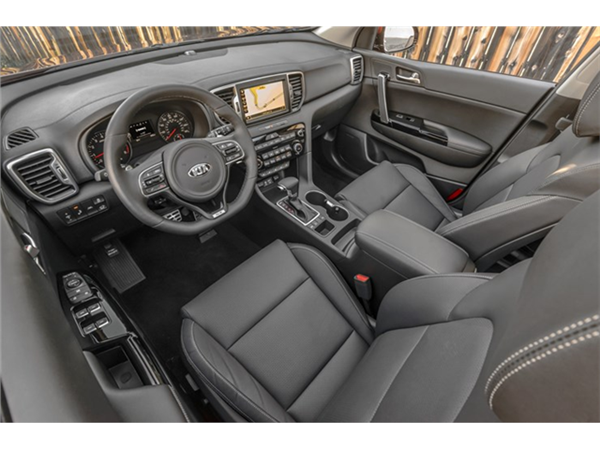 The 2017 Kia Sportage has two powertrain options. The standard engine is a 2.4-liter four-cylinder that returns 181 horsepower and 175 pound-feet of torque. The SX model receives an upgraded 2.0-liter turbocharged four-cylinder that outputs an impressive 240 horsepower and 260 lb-ft. A six-speed automatic transmission is standard with both engines, as is front-wheel drive. All-wheel drive is optional. Of the two engines, the 2.4L is more fuel-conscious, but for pure enjoyment, the huge power boost had with the 2.0L turbo is well worth the price.

Most will find that the 2.4L is a good daily drive, especially given the slightly softer dynamics of the vehicle with that engine equipped. Those who want more excitement, though, will greatly enjoy the SX Sport with its turbocharged four-banger. In either case, the transmission in the Sportage is well-programmed and non-intrusive most of the time. There may be some gear hunting in uphill climbs when the little crossover is laden with people or things, but for the majority of trips, gear shifts will be seamless. The road dynamics of the standard Sportage trims are softer than they were before, but not devoid of input. Drivers will find the Sportage to be engaging enough to remain enjoyable, though the smaller output ofthe 2.4 will be less off-line performance from stoplights and up onramps.

The 2.0L SX Sport models have a more dynamic appeal and retain the older-generation's tighter suspension and more precise steering. Still suitable for everyday driving, the SX model may be less comfortable for those who prefer a more quiet, sedate ride, but definitely delivers on driving excitement and get-up-and-go for those who want more zing in their drive. In short, there is likely a Kia Sportage model to fit any driving style with this new generation of the crossover. Whether you prefer fuel-conscious and comfortable or fast and exhilarating, it's covered in a model option here.

As befits the Kia brand, the 2017 Sportage is fairly long on value. Although price creep has meant that the Sportage is a little more contemporary on paper, the added upgrades and features still keep the Kia Sportage ahead of most in the small crossover segment. With a base price in the $23,000 range and a top-end price of about $35,000, there's a trim and package option for just about every buyer in this new Sportage.

The base model is not well-equipped, per se, but includes everything a base model car buyer would want. Cruise control, basic stereo functions and phone connectivity are all there and interior appointments are good. Most buyers, however, will be most comfortable in the EX trim with its added upgrades and better options packages. Good fuel economy and a price tag that isn't so far ahead of the base model aid this attractiveness and really bring value. 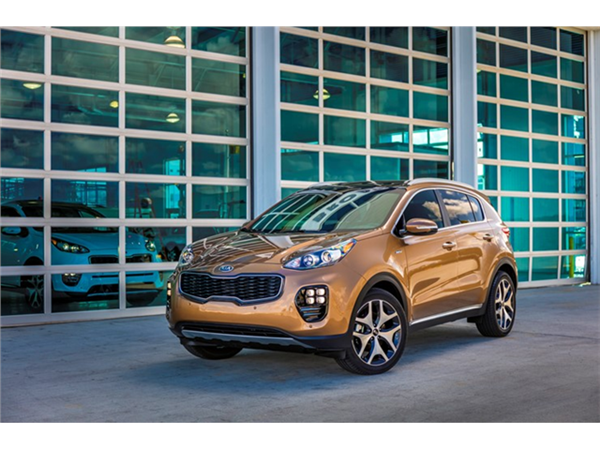 This new Sportage is far more competitive than the model has been in the past. With the significant upgrades found in this vehicle along with its value proposition, we feel that it's a must-shop for anyone looking in the small crossover segment. That said, there is strong competition in this fast-growing market.

The best-selling small crossover is the Honda CR-V (and HR-V) followed by the Toyota RAV4. Both are compelling offerings and have a lot of high points that put them ahead of the Sportage, not the least of which is substantially more cargo space. The CR-V is not as cost-competitive, however, and the RAV4 lacks the larger back seat found in the Sportage. Neither can boast the acceleration and on-road fun of the Kia either. Closest in that regard is the impressive little Mazda CX-5 or the Ford Escape. Both are fun drives with a lot going for them in terms of bang for the buck, especially the Mazda. Still, the Sportage has a better back seat than the CX-5 and a lower price point than the Escape.

In all, the 2017 Kia Sportage is a nicely-rounded, beautifully-designed, and smartly packaged small crossover. It has true seating for five adults and an excellent value point. With two engine options to choose from, one for the everyday driver and one for the fast-paced throttle stomper, there's something for everyone in the new 2017 Sportage.