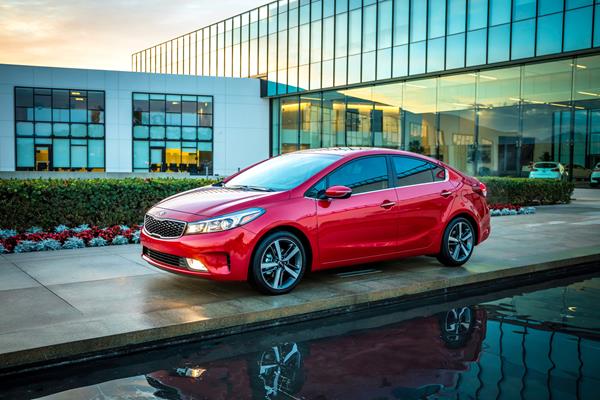 The Kia Forte is an often overlooked compact car that revels in its own value-oriented pricing and unexpectedly good delivery. It's a car with a short price tag and a lot of almost-upscale fittings.

The 2017 Kia Forte received some updated front-end styling, a few added options and a new S trim level for the sedan model with a sportier aim. A new base engine replaces the underpowered and outdated four-cylinder with a slightly larger one that also brings surprising fuel economy. Infotainment is upgraded and new advanced safety features are added as options for upper trims.

We're fans of the Forte, one of the few compact cars available today that offers both comfort and a low price tag. It's never been a best-seller in the segment, but it stacks up very well against those that are. And with Kia's standard warranty being far beyond what others offer, that's nothing to be snide about. Sadly, the fun little two-door Forte Koup model has been dropped. But with all of the other improvements this car sees for 2017, that's a small price to pay. 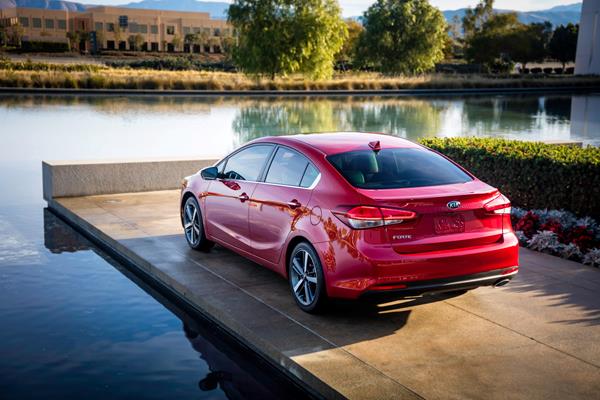 The 2017 Kia Forte is a smart-looking little car with a signature Kia appeal to its swoopy design. From its rounded, short hood to its rounded, fast-paced roof and clipped rear end, the entire car looks small, agile and fast.

The Kia's smiling, kidney grille oversees a relatively aggressive intake and is flanked by long, large headlamps that run through the fenders at either side. The curved, short hood meets a sharply raked windscreen which runs high into the roofline where the apex quickly turns downward in line with the center pillar of the doors. The rear roofline flows downward quickly to the clipped rear end (or hatchback) to a flat, sharply designed rear end.

The wheels of the Forte are pushed back, with a somewhat large overhang up front and a noticeably small overhang at rear giving the car a lot of forward motion to its look. Simple but effective body panels are moderately emphasized with light bone lines underneath to create a curvature that helps give a slippery, speedy look.

The greenhouse on the Kia Forte is good sized with curvy designs, especially at the rear pillar. Most trims have a nice chrome strip at the beltline to add a little bling to the overall look.

The compact segment is slowly but surely pulling itself out of the "cheap is the norm" mentality. A vehicle with a low price point doesn't have to have a low-quality interior and a lot of noise and rattle to go with it. The Forte is one of the compacts that's changing that trend, bringing a more upscale experience to the segment.

The interior of the 2017 Kia Forte is full of quality materials set in a contemporary but smart design. The higher the trim level opted for, the better the interior gets. Technology takes a big place in the Forte's interior, as does passenger comfort. 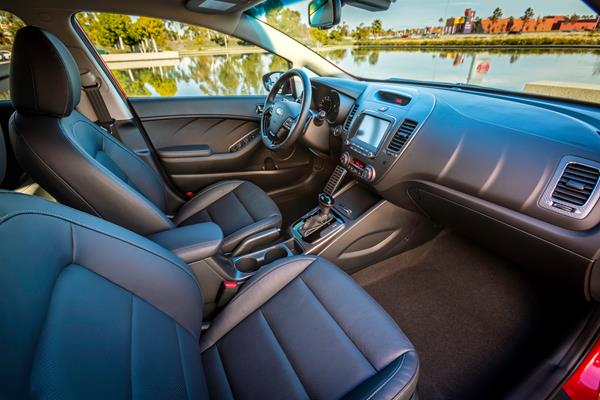 The front seats are very adjustable, even at the base level, and have a good design in terms of bolstering and cushion. The driver will easily find a position that offers good visibility, along with plenty of legroom and headroom.

The rear seats are surprisingly good for the class, and even tall folks will likely find enough room to be moderately comfortable there. The deeply sloping roofline at the rear does not necessarily translate into lost headroom inside The design compromise is somewhat shorter seats that may mean deeper knee bends getting in and out of the Forte.

Overall the interior of the 2017 Kia Forte is well done and nicely appointed. There is a good amount of storage too. Cargo space is good with 14.9 cubic feet in the trunk of the sedan and 23.2 cubic feet there with the hatchback. A 60/40 split-fold is standard in the 2017 Forte, adding even more versatility.

Technology has become a point of contention in the compact, entry-level markets and Kia has taken a big step forward in making more advanced options available. The base model Forte LX has a simple sound system with a CD player, satellite radio, a USB and auxiliary plug and Bluetooth. Upgrading to the Popular package adds a basic 4.3-inch touchscreen with a few more options for connectivity.

Where it's really at is in the EX and S trims or above, with their larger 7-inch touchscreen and Kia's Uvo eServices and infotainment user interface. This adds Apple CarPlay and Android Auto, telematics services from Kia, more connectivity options with the infotainment screen (including some streaming apps), etc. It's an easy-to-use and learn package that offers large virtual buttons and smart menu systems to make getting used to using the Uvo a quick affair. Navigation is optional in the upper trim levels.

There are plenty of compact cars that have excellent fuel economy. It's part of the class. The 2017 Kia Forte is middling when it comes to its mpg returns, but those returns are consistent rather than being paper dreams.

The base model is EPA-rated at 32 mpg combined, with 29 mpg in the city and 38 mpg on the highway when the automatic transmission is employed. With the manual transmission, those numbers drop to 28 mpg combined (25 city and 34 highway).

The EX sedan model is rated separately from the base LX, though it has the same engine. That engine receives some modest power boosting in this model, which reduces fuel economy a bit. Mpg ratings drop to 28 mpg combined (25/33). The hatchback model receives one mpg better on the highway, but is otherwise rated the same.

The SX model has a turbocharged engine that outputs significantly more power than the standard models and pays for it in fuel economy losses, having a combined 26 mpg per the EPA. That means 25 mpg in the city and 32 mpg on the highway. 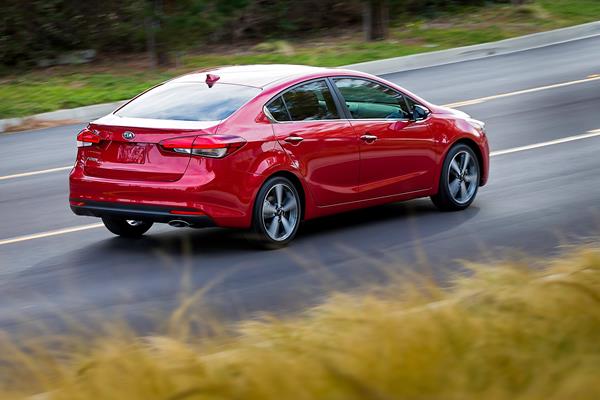 The 2017 Kia Forte has received a "Better Than Most" rating from the J.D. Power and Associates Vehicle Dependability Study. We've combined that result with Kia's excellent 5-year/60,000-mile basic warranty and 10-year/100,000-mile powertrain warranty. Together these make the Forte one of the best in its class for expected reliability.

The 2017 Forte is top shelf in its safety ratings as well. The National Highway Traffic Safety Administration gives it a 5-Star overall rating (out of five) for crashworthiness with four stars each for frontal and rollover, and five stars for side crash results.

Similarly, the Insurance Institute for Highway Safety (IIHS) has given the Kia Forte a "Top Safety Pick+" rating for 2017 thanks to newly-available advanced safety technologies. The Forte received top scores of "Good" for all crash tests conducted by the IIHS.

The performance metrics for the 2017 Kia Forte are significantly improved over the previous model years for this generation of the car. The base model LX and the upgraded S sedans have a new 2.0-liter four-cylinder engine that outputs 147 horsepower and 132 pound-feet of torque. A six-speed manual transmission is standard in the LX and a six-speed automatic is optional there and standard in the S. Front-wheel drive is standard. These models drive well and are a vast improvement over the somewhat sluggish 1.8L that the 2.0 replaces.

The EX sedan model has the same 2.0L engine, but upgrades it to generate 164 horses and 151 lb-ft, mostly through fuel and air delivery improvements. The six-speed automatic is the only transmission offered here, as is front-wheel drive. A special SULEV specification can be opted for that drops power a bit to 160 hp and 149 lb-ft.

The SX Forte5 has a turbocharged 1.6-liter four-cylinder that outputs an impressive 201 horsepower and 195 lb-ft of torque. A six-speed manual or seven-speed dual-clutch automatic transmission are available. The latter has slightly better fuel economy and a decidedly European appeal to its feel. The SX model also benefits from chassis stiffening and other upgrades to go along with its sportier nature.

The 2017 Kia Forte offers one of the best value options in the compact segment. Sales for the Forte are on the uptick, but still lag behind segment leaders. Kia dealers are often offering these cars, especially sedan models, at discount from their expected sticker price despite the 2017 Forte having one of the lowest price tags in its segment.

Although the base price for the 2017 Forte is low, most buyers will be in the mid-level instead at around $19,000 with options. At that level, the Forte still offers a bargain compared to most rivals. Add in the car's excellent warranty and high level of reliability and it's difficult to ignore the Forte. 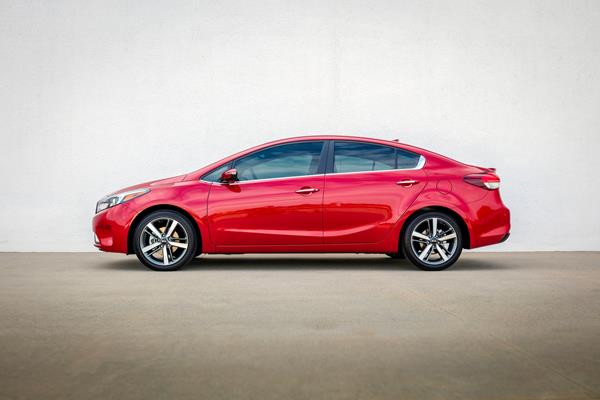 We recommend cross-shopping the 2017 Kia Forte with some rivals not only as a means of finding the best vehicle for your needs, but also as a way to bolster the value proposition that Kia is offering with this little compact. Chief competition comes from the Mazda MAZDA3, which is sportier and has more options for hatchback models, but whose price tag may be significantly higher than the Forte's. Similarly, the best-selling Toyota Corolla offers a smart comparison, but will be more expensive to buy. The also top-selling Honda Civic is another excellent choice and it saw significant upgrades last year.

While rivals may offer a sportier experience or a more refined appeal, the 2017 Kia Forte is a highly compelling option for the entry-level compact market. It's a versatile, well-designed all-around sedan with a unique look and intelligent interior that rivals most of its competition. There is a sporty option for those looking for that and a well-done base option for the rest, and the price of delivery is excellent for the value being offered. We think the Kia Forte deserves more attention than it receives in today's market.