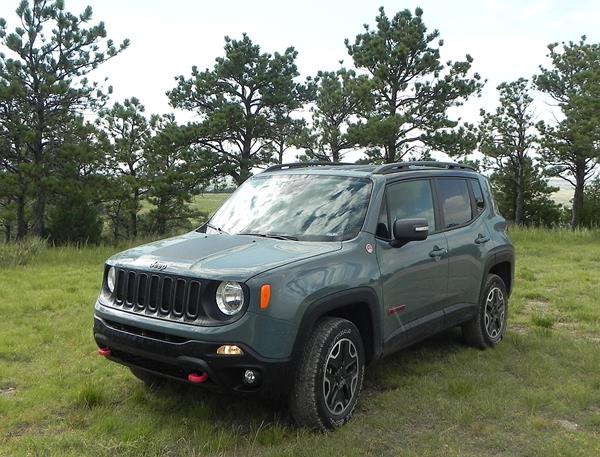 The 2017 Jeep Renegade is in its third year and this subcompact crossover has proven to be a winning combination of fun and capability that translates into everyday usability. Sales figures for the little Renegade show it's growing popularity as proof of that. The Renegade shows that Jeep can do an entry-level crossover that's both light on price and high on interior quality. Something previous attempts at entry-level categories have not been successful at.

For 2017 there are few changes in the Renegade versus the previous two years. Some added content, such as xenon headlamps, automatic high beams, and keyless ignition and entry, are now offered across the trim level board. The Renegade otherwise sees little change. 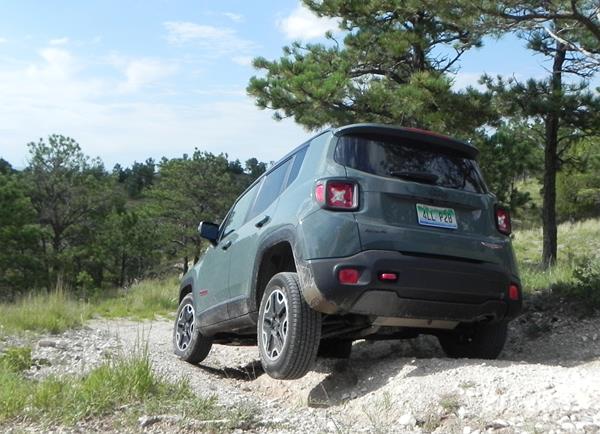 When the Renegade first appeared in 2015, it was a love-hate design for many people. Now in the model's third year, the love seems to have outstripped the hate.

Renegade takes the fun of a Jeep, including the nostalgic boxy look and round headlamps, and makes it its own. The front grille is unmistakably Jeep, with its seven-slot face and round headlamp eyes. A large bumper fits beneath that and an air scoop comes in below that.

Bumpy fenders with thick plastic guards and a flat hood with a stand-up windscreen carry the box back and keep the Jeep thing happening. Squared windows and a beefy rear end finish the look, as the hatch stands more or less straight up and down rather than curving like most crossovers. The whole look is fun, and the appearance of air underneath promises Jeep's reputation for off-pavement capability remains intact.

Where Jeep has jumped forward in the past few years, especially with its low-end models, is in interior fit and comfort. The 2017 Jeep Renegade has a great interior with good use of quality materials and a comfortable front seating arrangement. Soft-touch materials make up most of the dash and armrests, helping to create comfort and mitigate noise.

The front seating in the 2017 Renegade is well done with a fair amount of adjustability for the driver, even in the base model. It's easy to get comfy in the Renegade, and the controls layout and instrument visibility is top shelf.

The Renegade has a short wheelbase, which shows in the rear seats. Adults can fit there if the people up front aren't too tall. Most kids and teenagers are fine, and because of the Renegade's wide body and boxy structure, three across is realistic as well. That's unusual in the compact segment.

Cargo is also pretty good in the Renegade, though several rivals are better. Space behind the second row is 18.5 cubic feet, but a lot of that is vertical. The rear seats fold down to expand that to a pretty good-size 50.8 cubes. It's easy to utilize, thanks to the 2017 Renegade's boxy build and square rear hatch. Many large and bulky items that wouldn't fit in other more traditional compact crossovers will easily slide into the Renegade, including bicycles and large screen TVs.

For those wondering, the optional removable roof panels are the 2017 Jeep Renegade are really cool, but have their downsides. The panels (one up front, one behind) remove and stow in the rear cargo space without much fuss. One person can easily do it. But they are noisy when installed (compared to the solid roof) and when stowed, make the cargo space less then flat. For some, the fun factor added is well worth those sacrifices. We'd agree. 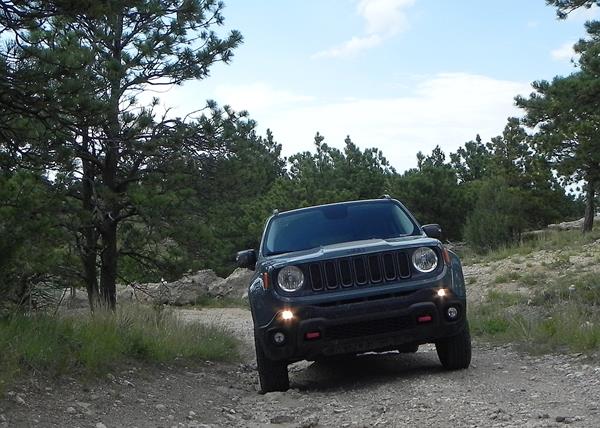 Like all Chrysler, Jeep, Fiat and Ram products, the 2017 Jeep Renegade uses the Uconnect infotainment interface. The smaller screen does the basics, like smartphone connectivity via Bluetooth and audio streaming. The upgrade, which we highly recommend, has a 6.5-inch touchscreen that's easy to read, has amazingly clear graphics on its user interface, and is simple to use.

A lot of things come with that, including voice-to-text that allows the system to not only read your incoming text messages to you, but also allows you to respond via voice. That's really useful in today's text-heavy world. Other things, including a WiFi hotspot, access to common apps like Yelp and more, plus navigation, are also available on the upgraded system. All of these are standard in the Limited trim package.

Fuel efficiency is not the 2017 Renegade's strong point, but given its capability off the pavement (compared with most others in this segment), it's not too bad.

The smaller 1.4-liter 4-cylinder base engine returns an EPA estimated 26 mpg combined, with 24 mpg in the city and 31 mpg on the highway in the front-wheel drive configuration. In 4-wheel drive, those numbers are the same.

Going to the 2.4-liter engine lowers fuel economy to 25 mpg combined, with 22 mpg city and 30 mpg highway in FWD. The 4WD models return 24 mpg combined: 21 city and 29 highway. We saw these numbers as realistic in the Limited model with the engine in 4WD. Those who opt for the more trail-capable Trailhawk model can expect these numbers to be optimistic, as our experience with it had lower returns. 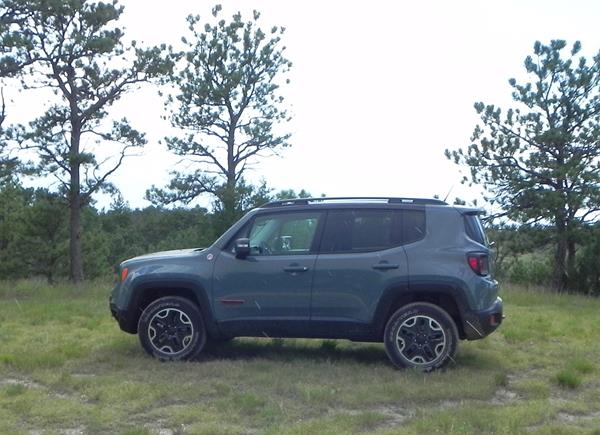 The reliability expectation of the 2017 Jeep Renegade is not particularly optimistic, but it isn't terrible either. The J.D. Power and Associates Vehicle Dependability Study gives the Renegade an "About Average" rating at the middle point of that rating (2.5 of 5), but there have been no significant recalls for the Renegade as of this writing either.

So far, only the National Highway Traffic Safety Administration has issued crash test results for the 2017 Renegade, giving it an overall 4-Star rating (out of 5). Frontal and rollover results were four stars while side crash tests were five stars. Those mirror last year's ratings.

The basically unchanged Renegade was rated by the Insurance Institute for Highway Safety last year with top-shelf "Good" results on the moderate overlap, side impact and roof strength tests. It was not tested for small overlap or rear crashes.

Several safety features not always expected to be available in the compact crossover segment are available with the 2017 Renegade. These include lane departure warning, auto-leveling headlamps and more. 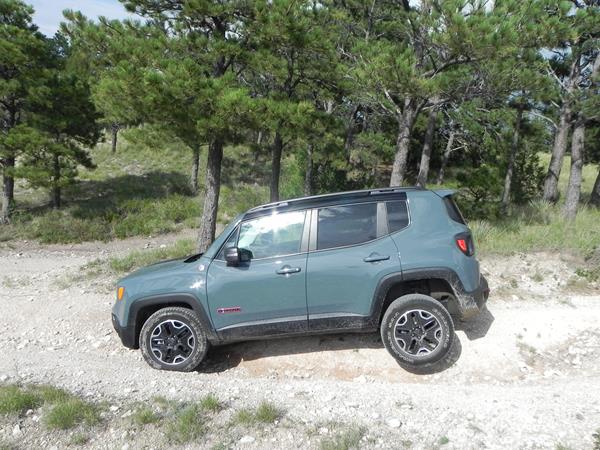 There are two engines, two transmissions and three drivetrains available for the 2017 Jeep Renegade. The base engine is a 1.4-liter 4-cylinder that is mated only to a 6-speed manual transmission. This engine outputs 160 horsepower and 184 pound-feet of torque to either the front wheels (in FWD) or all four wheels (in 4WD), depending on drivetrain option.

Optional on the Sport and Latitude trims and standard on the Limited and Trailhawk trims is a 2.4-liter 4-cylinder engine that mates to a 9-speed automatic transmission. This produces 180 horsepower and 175 foot pounds of torque and is available in either FWD or 4WD.

Trailhawk models are 4WD only and have a more robust 4WD system that includes low gearing. All 4WD Renegades have selectable terrain options with their 4WD and the Trailhawk adds one more terrain option (Rock). The Trailhawk is almost an inch taller and has more aggressive tire tread with its factory rubber.

Interestingly, the 2017 Renegade is rated for towing at up to 2,000 pounds, if equipped. Another unusual item in this segment.

On the road around town, the 2017 Jeep Renegade is a good drive with a tall stance that gives good visibility. On the highway is more comfortable than might be expected and is fairly quiet inside, though wind noise can be a factor if the optional removable roof panels are included. With the 1.8L engine, passing and getting up to highway speeds can be a bit of struggle sometimes, but not to the point that the driver gets nervous about it. With the 2.4L, those worries disappear and the transmission does well. However, the 9-speed can get annoying with its constant shifting when going at lower and moderate speeds (20 to 35 mph) as it hunts for the most efficient gear.

For the price, there's a lot of value in the 2017 Jeep Renegade. The base model rings in at a compelling price, but a few creature comforts we expect to be the norm aren't included. Like air conditioning. But jumping up to a more realistic buy doesn't mean breaking the bank. A well-outfitted FWD model can be had for around $22k after delivery and a solid 4x4 model at under $24k. Those aren't bad numbers considering how nicely done the interior of the Renegade is and how capable this little crossover can be.

Value is a bit subjective. A person who doesn't want the unique looks or who needs a guaranteed aftermarket resale value down the line may not find the Renegade quite as appealing as the first point is obvious and the second is untested, given how new this model is. 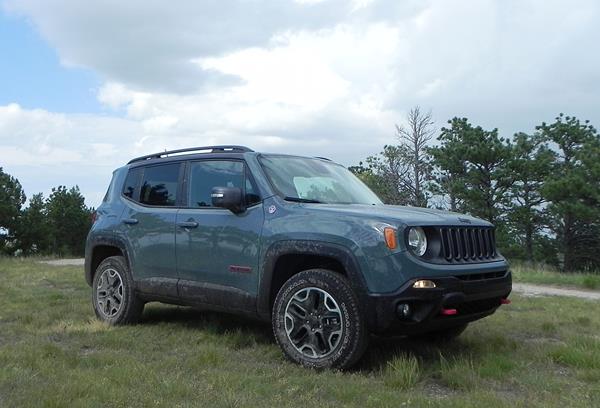 There is no shortage of options in the fast-growing compact crossover segment. The sporty Mazda CX-3 is a fun option with similar interior space while the Subaru XV Crosstrek has similar off-road cred. The more refined Fiat 500X shares many similarities with the Renegade in terms of interior fitment. Those looking for value might want to consider the newly redone Chevrolet Trax and its Buick Encore twin.

In the end, none of the competitors can hold a light to the uniquely Jeep nature of the Renegade or its real-world, proven off-road credibility when outfitted in the Trailhawk package. For pure fun, useful everyday versatility and a great interior experience, there is no other option in the subcompact crossover segment except the 2017 Jeep Renegade.