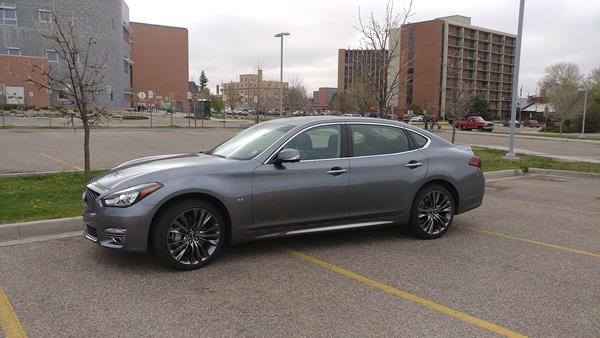 The 2017 Infiniti Q70 carries on with the big sedan's march through time. Although outdated by most standards, there is still a lot of appeal in this sedan's beautiful design and excellent interior. The strong V8-powered option and wonderful road presence are high points for this luxury sedan.

Infiniti hasn't changed much with this car versus last year's model, and we expect that a new generation of the car is coming very soon. Knowing that, buyers should be aware that great deals on this 2017 model might be in the offing as dealerships move to clear stock amid slow sales. 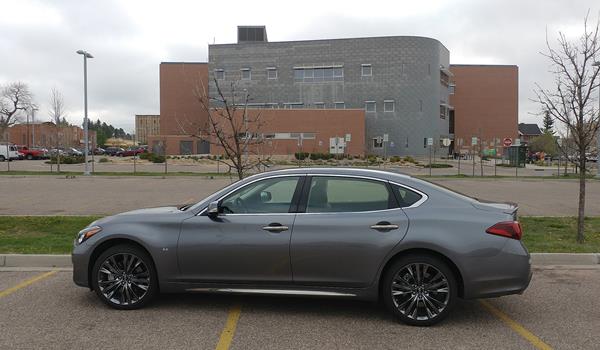 Critics like to complain about how dated they think the Q70 is, but we really like its flowing exterior style. There is a lot to be said for the small (by today's luxury standards) grille with its mesh inlay, its humped and aggressive front fender work, and its unadorned, rounded hood. The 2017 Q70 has a flowing, simple appeal that marks it as quietly luxurious.

The somewhat plain body panels are an illusion as underneath there are understated bone lines that mark the curves and movement of the paneling below the simple, curving beltline. The thin headlamps that curve up over the wheel well and the simplified use of chrome to accent rather than eye-grab is a beautiful study in use of materials for minimalist appeal at maximum impact.

The clipped rear end and low-slung roofline are final points that really drive home the forward movement of the Infiniti Q70's styling. This simple but beautiful design language is classic. In our minds, this is one of the sleekest-looking luxury sedans on the market.

The 2017 Infiniti Q70 has a well-done interior design with good ergonomics and a flowing nature. The curved dashboard and downward-sloping central stack are eye-pleasing and make most things easy to access. The infotainment screen, even at its best upgrade, is small for the car, and most drivers will find it a bit difficult to reach. 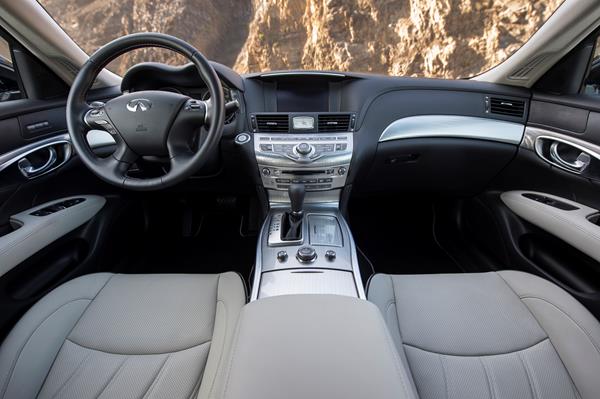 User controls are otherwise nicely done with plenty of access and ease of use. We like how wide the doors are and how easy it is to enter and exit the Q70, especially in the long-wheelbase model (Q70L) which extends the back doors and seating room by nearly four inches. Even without the extension, the back seats in the Q70 are spacious and accommodating for most adults and sitting three children across is easy.

Quality materials and plenty of visibility at all points make driving and being in the Infiniti Q70 a luxurious and well-mannered experience. Aside from a few problems with its infotainment layout and a general lack of gadget storage, we are pleased with the Q70's interior experience.

Easily the weakest point in the Q70's design is its very outdated technology and its poor placement within the car. Placement was addressed in the Interior section, so we'll look primarily at functionality here.

For the most part, all of the expected boxes are ticked with the 2017 Q70's infotainment. It has Bluetooth, navigation, some app connectivity and so forth. What it doesn't have is easy usability and great integration of those options. It starts with how difficult it can be to connect a smartphone to the car. The process is simple enough, but including both phone audio and streaming music from one phone gets problematic and requires some deep delving into the infotainment's settings.

From there, navigation is in low resolution and fairly slow. Turn-by-turn is good, but not always accurate commensurate with your actual location versus its perception of your locale. Smartphone apps aren't any better and often don't work at all or lose connection.

Voice control of the infotainment is likely the best way to control the car's technology, but its age shows as the menus are ponderous and require a lot of waiting before commands can be given. It does generally understand well, and only rarely misinterprets or asks for clarification.

If you're looking for edge-cutting infotainment, the 2017 Infiniti Q70 will definitely disappoint. 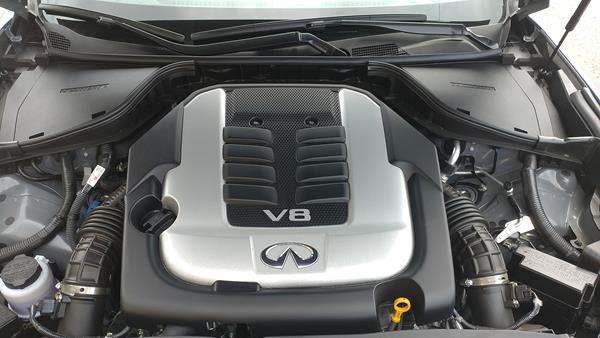 In the real world, our V8-powered Q70 averaged about 19 mpg overall in a week's worth of driving.

The Q70 is rated as "Better Than Most" by the J.D. Power and Associates Vehicle Dependability Study and has been for most of this generation of the car. No safety recalls have been issued this year as of this writing, and the 2017 model has a slightly better than average warranty at four years or 60,000 miles bumper to bumper.

The 2017 Q70 has been given a full list of best-possible "Good" marks for crash tests done by the Insurance Institute for Highway Safety (IIHS). Although the National Highway Traffic Safety Administration (NHTSA) has only ranked it on two tests, both were good returns and mirror excellent scores given to the car last year. Sadly, the Q70 does not offer as many high-end active safety and driver assistance options as we would expect in the luxury sedan category, so we have knocked it a couple of points for that.

Most critics pan the V6 as being too dainty for this car and we'd mostly agree. A short time with a V6-powered model proved it to have a definite under-powered feeling. The six is a 3.7-liter that outputs 330 horsepower, so on paper it should be more than adequate. However, power delivery is slow, and rivals almost all offer turbocharged V6s by comparison.

The V8 is beautiful to drive, with a throaty sound when pressed and a commanding presence at all times. The 5.6-liter V8 has seen a few upgrades, adding to its appeal (and explaining its improved MPG numbers). Delivering 420 hp, this engine is generally quiet and unobtrusive when idling or seeing light use, but gets muscular and fun when the throttle is pushed hard.

The Hybrid model has a 3.5-liter V6 mated to an electric motor that produces 360 horses altogether. This is the same hybrid powertrain found in the Q50 Hybrid model and it's good for this car, though not great. Fuel economy is excellent, but it sacrifices power and fun to get that. Buyers of the Hybrid won't likely worry about such things. 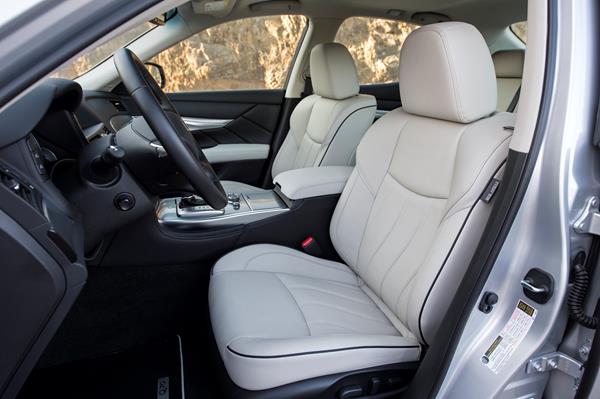 All three Q70 models come standard with a 7-speed automatic transmission in rear-wheel drive. All-wheel drive is an option on most models.

On the road, the 2017 Q70 is a great drive with a confident feel and strong presence. It glides well through traffic and out on the open road, with a nice steering feel and good maneuverability for its size. Some might complain that the steering in the Q70 is a bit soft, but those are likely folks who haven't discovered the driving mode selector and its Sport settings.

The base model price for the 2017 Infiniti Q70 is higher than most competitors. Low sales volumes this year and stiff competition from newer competitors mean that getting a deal from dealerships is more likely. Be sure to bring up pricing at competing dealers for competing models and note how many are on the lot, unsold. It's likely that dealerships are becoming desperate to move the Q70 off the lot and will greatly incentivize buyers to make that happen.

Resale values for the Q70 are below average for the segment, but ownership length is also longer than most. This generally means that people who own the Q70 are more likely to enjoy it, keeping it longer. 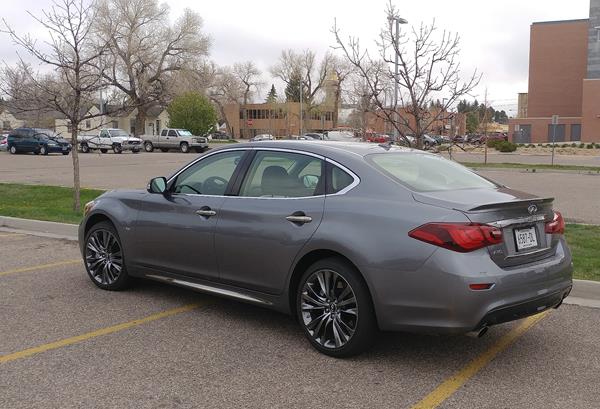 Competitors to the 2017 Infiniti Q70 include the Lexus GS models, Mercedes-Benz E-Class and the new Hyundai Genesis G80. We recommend shopping all of these for comparison before deciding, as the Q70 often doesn't stack up well when all is told. Keeping it in mind for price comparison and to negotiate better offers might work in the buyer's favor.

The 2017 Q70 is a great sedan with a lot of style and one of the roomiest interiors you'll find. It's hampered by outdated infotainment, a lack of some advanced options, and a relatively high base price. We expect that Infiniti will soon be updating the aging Q70 with a new-generation of the car, which may make this rendition more compelling in terms of price reductions.