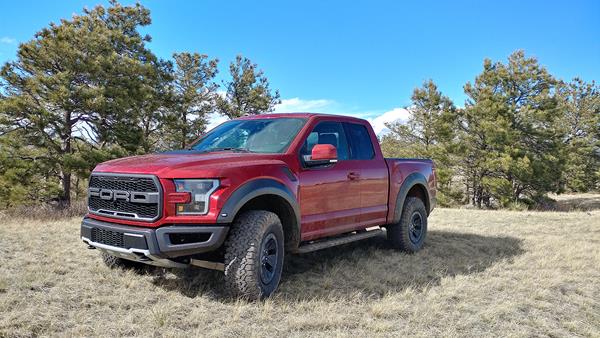 The 2017 Ford F-150 is America's best-selling vehicle and outsells all competitive pickups by almost two to one. For 2017, Ford added a lot to the F-150, including a new 3.5-liter V6 and 10-speed automatic transmission for improved power, performance and fuel economy.

That engine enters the Raptor with an outstanding 450 horsepower of output thanks to some turbo upgrades and engine tuning. The Raptor itself is unique in the class with its extreme off-road equipment and fast-paced styling and power. 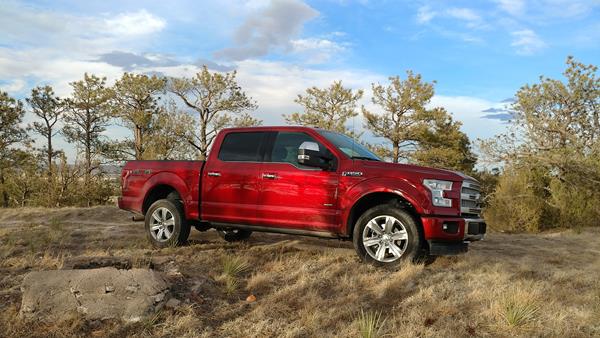 Every truck maker has a persona and Ford is no different. The F-Series has a strong, beefy look that is marked by a large grille, C-shaped headlamps and well-defined fender creases. The F-150 carries all of those hallmarks as Ford's flagship pickup truck.

The 2017 Ford F-150's exterior design begins with its large, squared grille. Heavy chrome lines run through the grille, creating three horizontal stripes atop an underlying mesh. Alongside this grille are headlamps making a C whose opening points towards the grille. A flat hood rides above that and well-defined fenders with strong creases to emphasize the large wheel wells dominate the edges.

A square body for the cab cuts down sharply and the rear fenders around the bed mirror the front. The belt line is defined by a downward swoop at the center of the front doors, which drops to add more glass to the rear view mirror access. Beefy bumpers tie everything together fore and aft and tail lamps similar to the headlamps finish the look.

The Ford F-150 has a solid appeal to it that's made it very popular. 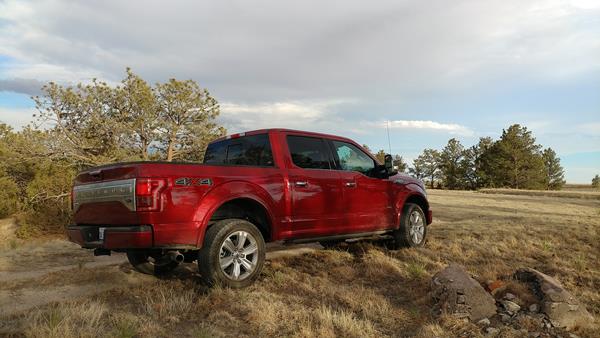 Inside the 2017 Ford F-150, the interior experience begins with a spacious cabin that utilizes intelligent controls layout and the thoughtful placement of technology. Seating is firm and spacious in all trim levels, gaining comfort as the trim upgrades. The SuperCab configuration offers a decent back seat while the SuperCrew cab is large enough for even the big and tall to find plenty of room in the back seats.

For the driver, the F-150 is hard to beat for controls layout and visibility. The 2017 F-150 may be one of the easiest full-size trucks to park, thanks to that. A few details, such as the huge shifter, are a bit odd, but these are not serious drawbacks. The F-250's more traditional column-mounted shifter means more usable storage in the console and the F-150 might benefit from that as well.

In all, the 2017 Ford F-150's cabin is roomy, comfortable and well outfitted at all trim points. 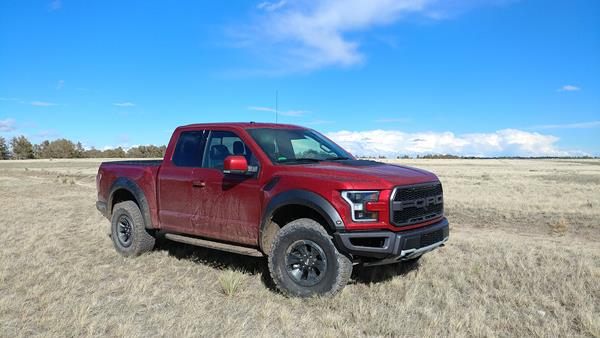 Lower trim levels of the 2017 F-150 have little or no technology for infotainment, getting by with Bluetooth connectivity and satellite radio. The new Sync 3 infotainment interface is available or standard in upper trims, and offers one of the richest and easiest-to-use infotainment options in the industry.

Ford's Sync 3 has an 8-inch touchscreen with navigation and Siri Eyes Free and it automatically updates when connected to any WiFi signal. The 2017 Ford F-150 has a user-friendly Sync 3 interface with a responsive touchscreen that features smart and easily understood menu layouts.

Also available for the F-150 is a trailer backing system that uses the larger infotainment screen to show a backup camera view of the trailer behind the truck. The driver can then guide the trailer using a knob on the dashboard that turns the trailer in the direction the knob is turned, improving backing for those who are not as trailer-savvy as others. It's also great for trailers that are too small to see clearly in the rear view and side mirrors. 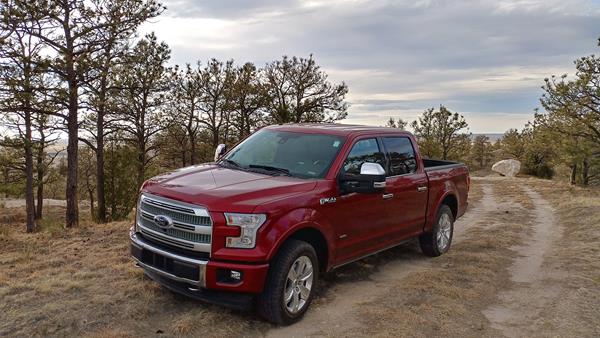 In our road tests of an F-150 Platinum edition and an F-150 Raptor, we found that the EPA ratings are sometimes a bit enthusiastic. The standard F-150 with the 3.5L turbocharged engine did very well with fuel economy numbers about on par with expectation during normal driving. When off-road, even in 2WD, those numbers dropped significantly. In the Raptor model, the EPA's 16 mpg combined was very optimistic with our numbers being closer to 14 mpg all told.

The 2017 Ford F-150 has a slightly better than average ("Better Than Most") rating from the J.D. Power and Associates Vehicle Dependability Study. It has also received only one recall, for a simple gear indicator. The F-150 has enjoyed a reputation for reliability throughout its current generation and we expect that to continue, even with the new transmission and engine option. 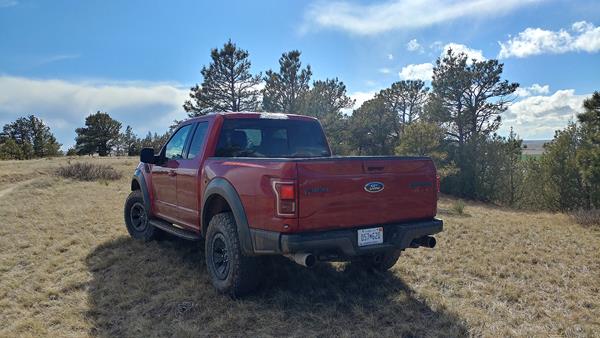 The 2017 F-150 has some of the best safety scores you can expect from crash testing. The National Highway Traffic Safety Administration (NHTSA) rates the 2017 F-150 at 5-Stars overall, with five stars on all crash tests except rollover, for which it received four.

The myriad of engine options for the F-150 mean that there is probably a drivetrain setup for just about every buyer. The base V6 is a 3.5-liter that produces 282 horsepower. It does a decent enough job of pulling the truck around under light loads and normal use.

The upgraded 3.5-liter turbocharged V6 is a little better, going to 385 hp and improved towing and capability. This engine doesn't sacrifice much fuel economy for the upgrade in usefulness and is the go-to engine for the F-150 in this generation. A six-speed automatic is standard with both of these V6 engine options.

A 2.7-liter turbocharged V6 that outputs 375 horses is also available on some trim levels. This can be mated to either a 6-speed automatic or a new 10-speed automatic. The most fuel-efficient of the options, this engine sacrifices a bit of capability on some fronts, but gains a lot in return. It's also the most car-like of the engine choices, giving the F-150 a more low-to-the-ground feel and a much faster response on the throttle for everyday driving. 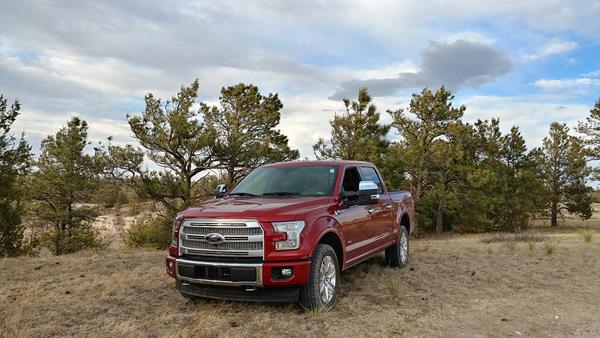 The go-to V8 is a venerable 5.0-liter that outputs 385 horsepower. It allows ethanol to be used as a fuel (unliked the turbocharged engines) and good all-around capability.

Finally, a new twin-turbocharged Ford Performance engine is offered in the Raptor model, with the 10-speed automatic as the only transmission option and 4-wheel drive as the only drivetrain of choice. This engine outputs a whopping 450 horsepower. All 4-wheel drive F-150 models have off-road packaging to include skid plates and the like, but the Raptor takes that to new levels with a reservoir-based suspension system, bigger brakes, beefier wheels, huge tires and a lot more.

In everyday performance, any of the F-150 models will do well for normal use and driving. Hauling light loads, pulling small trailers and otherwise getting around is good in any F-150. The Raptor has a rougher highway ride than its counterparts, as should be expected of the beefier tires and suspension.

Under load, the turbocharged V6 and standard V8 engines are the options of choice for pulling heavier trailers and carrying beds full of goods. Any of the 4WD models will do well hauling your gear to the campsite and pulling a small boat or other toys to the lake, though, with the capability to get everything there and back.

Another improvement in towing comes with a slight upgrade to the Tow Mode selector and trailer sway control. The braking system and trailer sway controls are better at keeping the driver from feeling pushed around on the highway by a bigger trailer. This was an issue in earlier renditions of the newly aluminum-bodied F-150, which is lighter and has a lower center of gravity, both of which meant trailers sometimes felt as if they were pushing the truck around.

Other high points of driving the F-150 include the great visibility and smart options like electronically telescoping mirrors for towing and 4-wheel drive automatic, which allows the 4WD system to engage as needed, acting in a way similar to an all-wheel drive SUV.

The 2017 Ford F-150 is one of the best-priced trucks on the market with diverse trims and package options to allow just about any need to be covered. The F-150 outsells the nearest competitor (as of this writing) by two to one and is the best-selling vehicle in America, bar none.

From the base level pricing up to the most expensive models at over $60k, the F-150 has a price point that matches just about anyone's budget. Best pricing in terms of value for a consumer-grade pickup meant to do light-duty work and occasional weekend hauling is in the Lariat package and upper-edge XLT packages.

Most buyers will be best served with a 6.5-foot or shorter box, which maximizes payload and minimizes parking headaches. Especially with SuperCab and SuperCrew models with their valuable back seating. 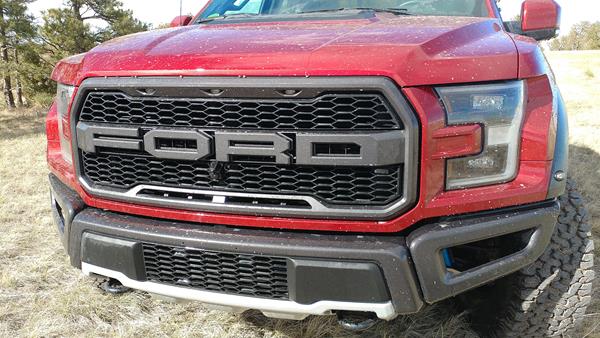 The full-size pickup truck market is full of excellent competitors. The best-selling 2017 Ford F-150 is rivaled by the excellent Ram 1500, which includes a diesel option and the competitive Rebel package against Ford's Raptor. The Chevrolet Silverado and its twin the GMC Sierra offer excellent towing and capability, but not as many engine choices or diverse packaging options by comparison. The all-new Nissan Titan is another excellent choice, including its heavy-duty half-ton model the XD with both diesel and gasoline options. Buyers might be surprised with Nissan's class-leading warranty.

The F-150 remains the most competitive in terms of pricing and value, and offers a good warranty and excellent packaging options. The 2017 Ford F-150 has a great all-around build and can be trimmed and packaged to meet most any need. With a huge choice of engine and powertrain options, excellent technology and top-shelf safety ratings, there isn't much to knock about the F-150.