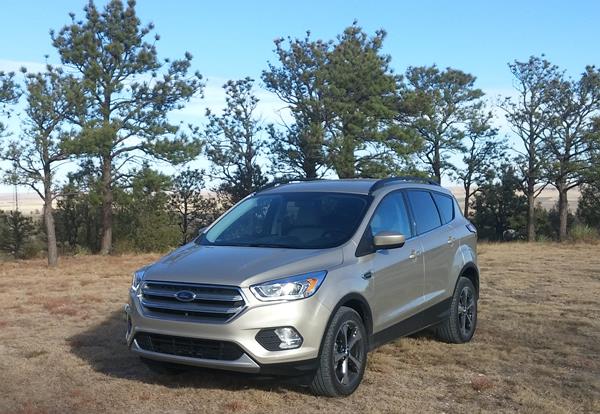 The 2017 Ford Escape is a good-looking compact crossover-SUV that competes in an arena with some of the best offerings automakers can present. The fast-growing compact segment is a focal point for many manufacturers and Ford has managed to bring its A-game with the little Escape.

The Escape offers a fun demeanor, great exterior look and a choice of three engine options. It's roomy inside, drives well, and has exterior color choices that border on ridiculous in their brightness. The Escape manages to be both contemporary and edgy. We feel it should be on most buyers' shopping lists in this segment. 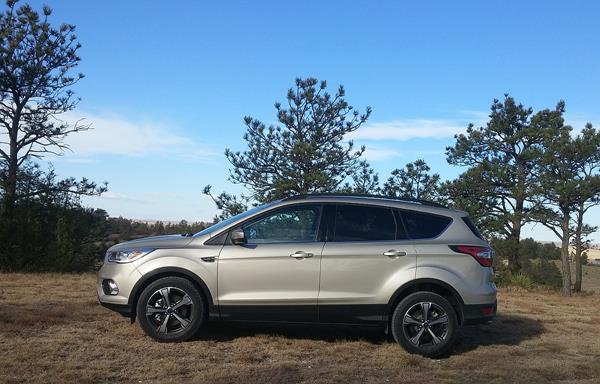 There are no bones about the Ford Escape's great exterior look. The 2017 Escape is a good-looking, sporty little compact crossover with a lot of style points in its favor. The small grille is underlined by a thick intake bezel and a wide set of flanking fog-lamp openings. Small headlights peer out from either side of the thin grille and fast-paced hood lines run up and to the windscreen to bring on the sport.

The slightly sloping roofline is accented by a lifted beltline and slightly upward-running body lines, to create a pinched and forward-leaning appearance for the rear that continues that sport driving emphasis.

Several wheel options help to make the 2017 Ford Escape look higher-end than its price tag implies. An array of body color options might surprise those who are used to the relatively conservative and stodgy family crossover segment choices.

The 2017 Escape has a well-considered passenger layout with plenty of room for people sitting both up front and in the rear. As is a Ford hallmark, the Escape includes smart seating arrangements in this compact, courtesy of its basis on the well-done Focus. Like the Focus, the Escape suffers ergonomics issues.

Controls layout in the 2017 Escape are a little bit haphazard. Climate controls are down low and partially blocked by the shift lever, requiring taller drivers to crane their neck to see them and forcing shorter drivers to bend around to either side for the same reason. The open-close dials for the central vents are set high and back on the upper dash, making them a little confusing for those not used to the placement. 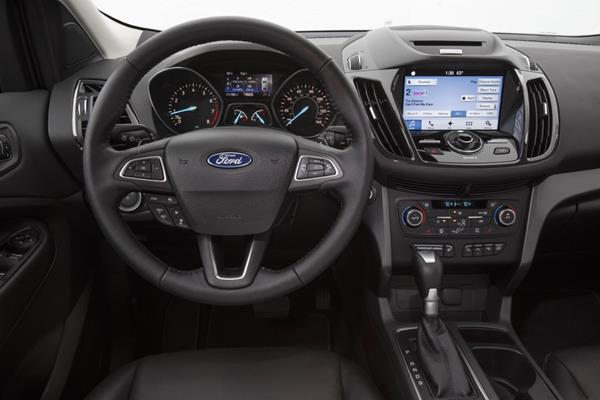 Most problematic for the 2017 Ford Escape's interior may be materials choices. In the middle-road and mid-upper trim levels, the interior of the Escape can seem a bit cheap when compared with similar-priced competition. Soft-touch materials are found throughout, especially where the sound dampening will help the most (all good), but cheap-appearing and cheap-feeling hard plastics, and hokey faux inserts diminish that.

Rear seat space is good for the segment, with the Escape having enough room that most adults will be happy in the second row. Adjustability is on par with segment expectations. Surprisingly, cargo space is very good in the Escape. Usually that's a tradeoff for more rear seat room.

Cargo space in the 2017 Escape sits at a roomy 34.3 cubic feet behind the second row and a solid 68.1 cubes with the rear seats folded. They fold with one touch, which is another unusual feature in this segment. The optional hands-free power liftgate (wave a foot under the bumper and it opens) and the square hatch opening are also boons to cargo ergonomics.

The base level 2017 Ford Escape has an unimpressive and hard-to-use infotainment system based inside a tiny touchscreen. Its use is hampered by the lookalike buttons on its screen, forcing the user to peer closely to find their choice. The whole system is largely akin to the MyFord Touch system that undermined Ford's infotainment up until this year, with the introduction of Sync 3.

Upgrading the infotainment to the larger touchscreen and the Sync 3 system brings with it a whole new level of capability and user friendliness. Sync 3 is much faster and easier to use than its predecessor and has a level of sophistication that rivals some of the best offerings currently found in automotive infotech. The upgrade moves from the tiny 4.2-inch display to the larger 8-inch screen for far better visibility.

AppLink is standard in all Escape models, but is greatly updated and expanded for the upgraded infotainment's smartphone integration. We especially like the mirror option that allows the phone's screen to be virtually mirrored on the infotainment screen (via USB connection) for ease of use. Voice commands, one of Ford's long-standing strong points, are also excellent in the new Sync 3 system. 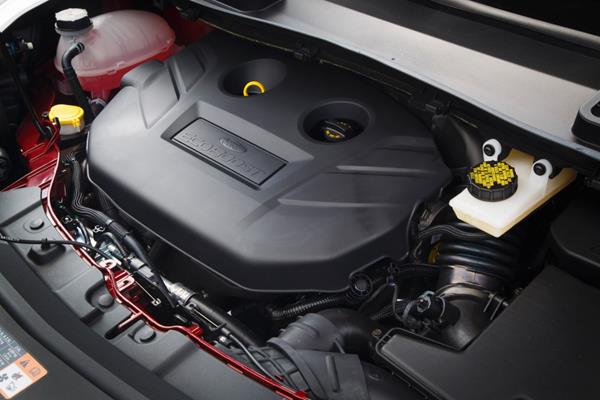 Fuel economy ratings in the 2017 Escape are better than average no matter which engine or drivetrain is chosen. The base models with their 2.5-liter 4-cylinder offer 25 mpg combined, with 22 mpg in the city and 31 mpg on the highway. This engine is offered with front-wheel drive only.

In the real world, that 2.0L engine with AWD produced lower fuel economy than expected, delivering only 19 mpg combined during our week with the Escape.

The 2017 Ford Escape is rated by J.D. Power and Associates in their annual Vehicle Dependability Study as being "About Average." The vehicle is backed by an industry-standard 3-year/36,000-mile bumper-to-bumper warranty and a 5-year/60,000-mile powertrain warranty. We also note that the Escape has had no safety recalls for this model year.

The 2017 Escape has received a 4-Star (out of five) overall rating from the National Highway Traffic Safety Administration, with four stars each for the frontal and rollover crash results and five stars for side crash results.

The Insurance Institute for Highway Safety has rated the 2017 Ford Escape with its best "Good" results on all crash tests except the small-overlap front test results, for which the Escape received an abysmal "Poor" rating. This is a common problem in compact crossovers, but most are at least receiving second-best "Acceptable" ratings rather than worst-possible "Poor" ratings.

The base engine for the 2017 Escape is a 2.5-liter 4-cylinder that produces 168 horsepower and 170 pound-feet of torque. Available only with front-wheel drive, this engine is mated to a 6-speed automatic transmission. That transmission is standard across the board for the Escape, slightly re-tuned for each engine choice's outputs.

Two turbocharged upgrades are available for the Escape, both from Ford's EcoBoost family. A 1.6-liter turbo four produces 178 horses and 184 pound-feet of torque. This is a good mid-range engine, but given the struggles we had with the slightly larger 2.0L, we expect that this 1.6 will have similar issues, if not worse. It does deliver the best fuel economy of the three engines offered, though.

The other turbo upgrade is a new 2.0-liter 4-cylinder that produces 240 hp and 270 lb-ft. This is a serious goer with a lot of umph in the low end. 0-60 times of about 7 seconds are very doable in an Escape equipped with this powerplant. Sadly, it was not as performance oriented when faced with highway speeds and resistance. Towing with this engine is rated at up to 3,500 pounds

- another unusual point in this segment.

As with most small Ford vehicles based on the global Focus platform, the 2017 Ford Escape is a sporty, smart-handling vehicle around town and in tight spaces. It's fun to drive in the corners and from a standstill. Once moving at higher speeds, it's less interesting. Some engines, especially the turbocharged options, struggle to keep the Escape moving at higher speeds when any kind of resistance (headwinds, inclines) is met. Our test model actually lost cruise control at one point due to the 2.0-liter turbo's inability to keep the vehicle at speed through strong headwinds.

The Escape is otherwise respectably quiet on the highway, though the optional panoramic glass roof negated this at highway speeds. 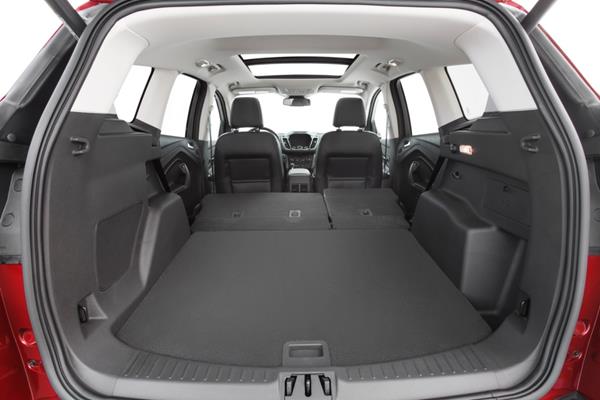 The MSRP for the 2017 Ford Escape starts at a base point that's about par for the segment. Some are a bit lower cost, but won't have the same level of amenities inside. Most buyers fall within the mid-level price ranges, and for the Escape, that's roughly $26,000 to $30,000 with the SE trim. At the lower end of that price spectrum, the Escape SE is a good buy in terms of value for the things included. Moving up the ladder,  the higher price and not-so-premium interior begins to take a toll on the Escape's appeal.

Most buyers looking for higher-end vehicles in the compact crossover segment will be well-served by shopping around. Otherwise the Ford Escape is a great option to have on your shopping list for this segment.

There are a lot of great choices in the sporty compact crossover arena. The best-sellers include the Honda CR-V and Toyota RAV4, both of which are roomier inside, but neither can compete in sportiness or with the Escape's array of engine options.

Most competitive with the Ford Escape would be the Mazda CX-5, which is similar in size and fun, but has a far superior interior experience. On the value front, the Hyundai Santa Fe Sport is another solid contender against the Escape, especially in the upper-level trims.

Our total assessment of the 2017 Ford Escape is very good, giving it an "A-" score. We really enjoyed the Escape's fun presence and excellent new infotainment interface (on the upgrade). We also like the Escape's great looks and wide choice of powertrains and trim packaging. We found the 2017 Escape to be highly comparable to other options on today's market and well worth considering for most buyers.