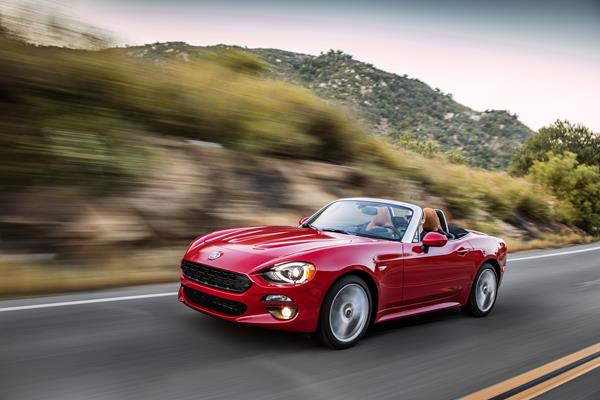 For 2017 Fiat brought an all-new Spider, resurrecting the popular 124 roadster from its recent past. With a few nostalgic homages to its past, the new 124 Spider is a modern take that retains the fun driving nature of its namesake.

Underneath the Fiat skin is a Mazda Miata, but that doesn't mean that the Fiat 124 is just a reskinned MX-5. Fiat put their own drivetrain under the bonnet and retuned the suspension for a more upscale appeal. Inside, the Fiat 124 Spider is far more sophisticated in materials quality than its Miata cousin, but retains some Miata quirks like the stick-up infotainment and oddly-rounded square dashboard.

All of this adds up to a 2017 Fiat 124 Spider that is a mixture of new and familiar. It's a good mix and it makes for a fun vehicle in almost any driving situation. 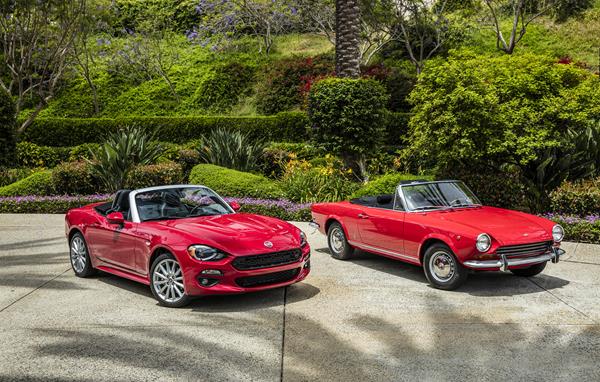 The Fiat 124 Spider has a sleek design that both reminisces to the original 124 from the 1970s and looks forward to more conventional car designs from Fiat for the near future. The exterior of the Fiat 124 is decidedly European with a flair that can only be from the old countries.

A rounded nose rises into flat fender humps that run back to the A pillar. Small ridges across the hood mimic this run, flattening out the roundedness of the nose to make a shape similar to the now-iconic 124. The raked windscreen, flat door tops, and round, but not over-muscular rear fenders give a shape to the rear end that calls for the word "boot" to be used when describing the trunk.

The general shape of the Fiat 124 Spider is somewhat familiar, since the underpinnings of this bodywork are from Mazda and its now-iconic Miata, but the look is purely Italian. No matter the angle of approach, the 2017 Fiat 124 Spider is very nice to look at.

It's inside that the Fiat 124 looks most like its near-twin from Mazda. The dashboard is the familiar flat line with rounded surfaces, but with a few Italian upgrades to texture and door panel curves unique to the Fiat. Controls and infotainment are set up almost identically to the Miata, though instruments are a bit different. The greatest difference is in materials choices, which though similar in shape to the Mazda are much more upscale in the Fiat. 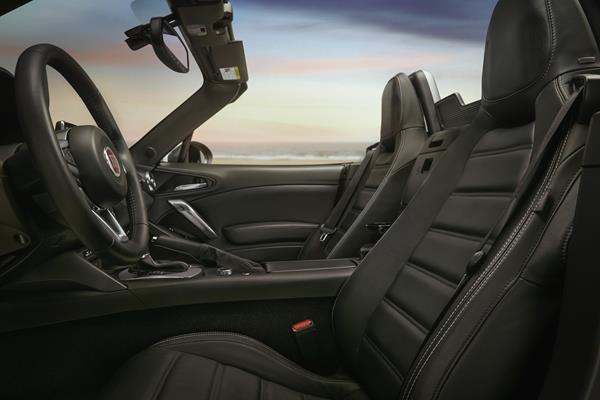 As expected, the interior of the 2-seat Fiat 124 Spider is tight, but manageable by most. Operation of the cloth top is easy, even though it's manual. After a couple of tries, most can unlatch, lift and "throw" it back to its rest position without leaving the driver's seat. Putting it back up is a matter of reaching back and pulling up and over. Just don't try this while driving.

Sadly infotainment is not from Fiat-Chrysler's excellent Uconnect system, which is easily the best on the market. Instead, the infotainment is Mazda's system, which is not bad but has nowhere near the functionality of Chrysler's tech. That said, in the laid-back seating of the Fiat 124, the command knob ahead of the armrest and behind the shifter is a nice touch that Fiat would not have come up with on their own.

Most of the controls and user interface are fairly straightforward, but not spectacular. Satellite radio, Bluetooth and other expected basics are all there.

Fuel economy in the 2017 Fiat 124 Spider is good, though not stellar. The EPA rates it at 30 mpg combined with the manual transmission, returning 26 mpg in the city and 35 mpg on the highway.

The automatic transmission achieves 29 mpg combined, with 25 mpg in the city and 36 mpg highway. 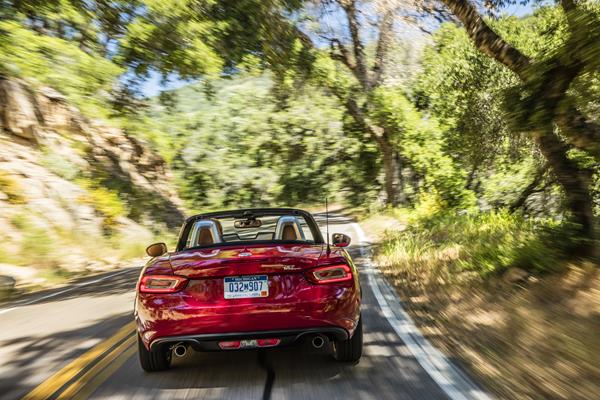 Outside of its engine, we have little to use to gauge the likely quality and reliability expectation that the Fiat 124 can offer. The little 1.4-liter engine is well-vetted via other Fiat vehicles, but nothing else on the car is well enough known to warrant a high expectation. The Fiat 124 Spider is literally brand new.

There isn't much to go on in terms of safety testing for the 2017 Fiat 124 Spider. Neither the national Highway Traffic Safety Administration nor the Insurance Institute for Highway Safety have crash tested and published results for the 124.

There is a good suite of standard safety equipment for the Spider and some good options such as blind spot monitoring and lane departure warning that tell us that this car will likely do fairly well.

A major difference between the Fiat 124 and the Miata is in powertrain choice. Fiat chose to put their own powerplant under the hood of the 124, going with the well-vetted 1.4-liter 4-cylinder that powers many of the company's small cars.

This turbocharged engine outputs 160 horsepower and 184 pound-feet of torque. The Abarth model bumps the horses to 164. A 6-speed manual transmission is standard equipment and a 6-speed automatic is an option. The automatic has paddle shifters on the Abarth model.

The Fiat 124 Spider is not as lightweight as its Mazda counterpart, but the extra juice under the hood helps waylay that. It's a bit jumper off the line, with peak HP and torque coming sooner thanks to the turbo. At speed, it handles in a way similar to the Miata. Which is to say it handles beautifully. 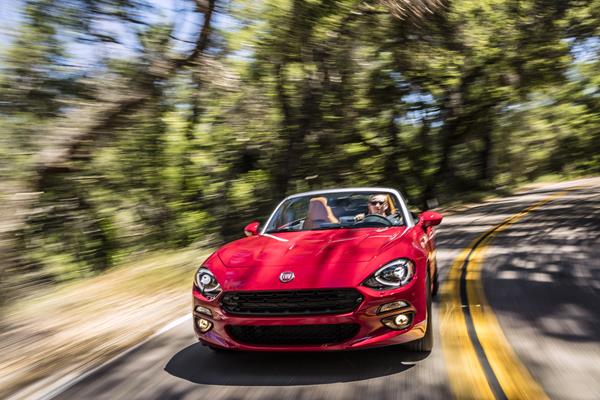 The 2017 124 Spider is a beautiful car to drive both around town and on the highway. It's relaxed, thrilling and above all, fun. It takes some practice to get the responses you want from the engine and transmission, as you learn the torque curves, but the manual shifter and smooth clutch all help make this an easy curve to learn.

Speaking of curves, the Fiat 124 Spider eats them up with gusto. It loves to corner both lazily and under pressure. And it does both with road-hugging joy.

It's difficult to put a value on a car like the Fiat 124 Spider. It is, after all, mainly an emotional purchase, not a dollars-and-cents one. An accountant with a ledger book who never looked up to witness the visceral draw that this car has would pass it by without consideration. Yet justification can be had in a myriad of ways to explain away the lack of ROI in pure figures. The return is not on the economic investment. The return from the Fiat 124 is in the joy it brings and the brightness it gives to the mundane everyday driving.

The price paid is more than reasonable for those returns. The base and mid-level pricing for the 2017 Fiat 124 Spider are within reach of most looking for a daily driver or second vehicle for the weekend.

In those ways, the value of the Fiat 124 Spider is high. 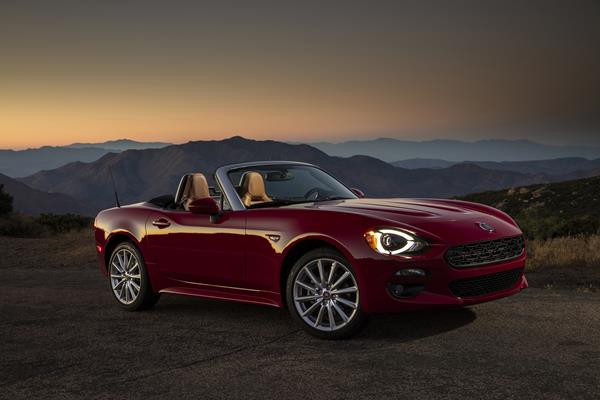 The only direct competitor to the 2017 Fiat 124 Spider is the Mazda MX-5 Miata, upon which it's based. The Miata is not as peppy by comparison, but is fun to drive. Pricing is a bit lower for the Mazda and its styling is just as compelling.

Other competitors are the Toyota 86 and Subaru BRZ twins, both of which have a lower price tag but don't have the convertible roof. They are comparable in every other respect. The Mini Cooper convertible is also worth a look, though it is a bit pricier but offers more interior space.

However you slice it, the Fiat 124 Spider is a great car. It drives very well, imbuing its European essence for excellence on the road with an Italian flair for turbocharging and simplicity. There is definitely a lot to like in this little car.