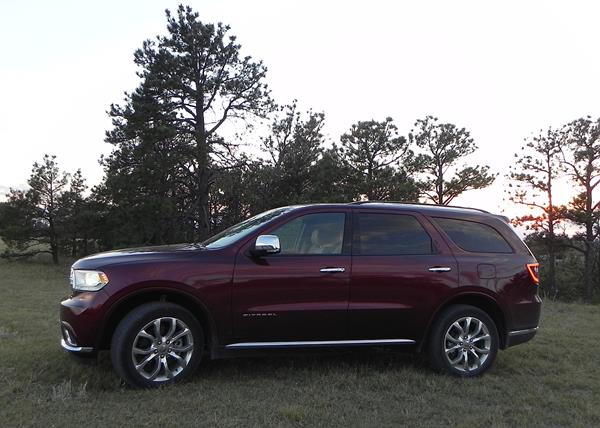 The 2017 Dodge Durango has just about everything a family needs: space, versatility and comfort. Options for muscle and towing are also there. What's more, the Durango has managed to boost its scoring by just tweaking a couple of things that bothered us last year. It's now a top-rated crossover.

Most notable changes for the 2017 Durango are dropping the Limited trim, which has been renamed the GT. That GT adds a monochromatic exterior look and some sporty add-ons that give those who like the "sinister" looks (blackouts and such) the Durango is known for at a lower-cost option. Another change is the option for removal of the third row from the base SXT model. This gives the fleet buyer a cargo-specific option in the Durango.

Another option changed for the 2017 model year was the addition of a new Anodized Platinum package for the top-level Citadel model. We got to see it first-hand and were impressed with its luxuriousness.

The 2017 Dodge Durango is otherwise the same solid crossover it has always been. It's big, it's roomy, and it's ergonomic. It's unique look and choice of powertrains make it a great option for the full-size crossover-SUV buyer. 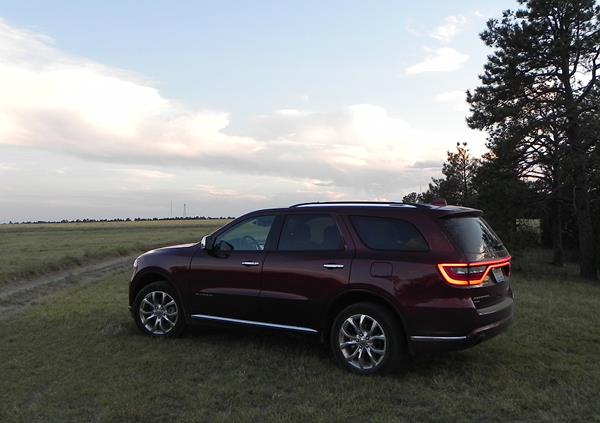 The 2017 Dodge Durango is unique in the full-size crossover category because it's the only one in its class that retains the big, beefy look of a sport utility vehicle. The Durango's most obvious attribute is its physical, muscular presence versus the more smoothly chiseled, narrow-nosed crossovers it competes with. That's a selling point, not a detraction.

As a brand, Dodge is known for its designs that evoke a raw, somewhat nostalgic, and sometimes even sinister look. The 2017 Durango carries these for sure, the latter in its new GT trim (which replaces the Limited) in "blackout" mode.

The 2017 Dodge Durango's look begins with its front crossbar grille, which is flanked by squared headlamps and a wide intake below. The bumper is fat and wide, like an SUV's or truck's would be, and the hood is flat and broad, another truck homage. The roofline of the Durango is straight and flat and ends in a squared rear hatch that only slightly angles for a sporty look.

Much of the Durango's look is a throwback to the 1990s when all sport utilities were big muscular machines derived from pickup trucks. No matter the trim point, the 2017 Durango always looks more powerful and muscular in the parking lot than its competitors do. And that's a good thing.

The 2017 Dodge Durango has a very family-friendly interior. Even the third row is usable by grownups and wide-opening doors and easy-fold seating mean that getting in and out of the second and third rows requires less yoga than its competitors do. Throughout the cabin, workmanship and materials choices are all very good, though some might find them a bit dated in comparison with newer rivals.

New this year is the option for a 2-row Durango in its base model. Otherwise, the interiors are the same throughout the trim lines, with the exception of some materials options and accompanying technology. 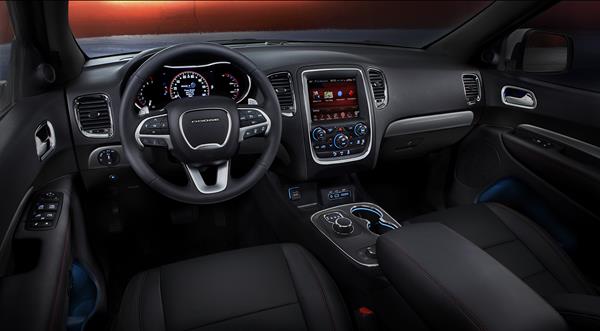 Front seating in the 2017 Durango is spacious and well-designed. The driver's cockpit is clean, controls are easy to find, and the adjustability is very good (even in the base model). Almost anyone will find a comfortable point in that driver's chair. The front passenger is similarly treated, with a nice amount of legroom and plenty of head and shoulder room as well. Storage cubbies are abundant in the Durango.

In the second row, seating is some of the most comfortable to be found. Good amounts of adjustment and plenty of seat bolstering make it a good place to be, even if you're an adult. The third row is not quite as good, but still adult-friendly with an unusually high seating position for a third row. Headroom is great all around.

Cargo space in the 2017 Dodge Durango is excellent and easily accessible thanks to a squared rear hatch and easy-fold seating options for expansion. It maxes out at 84.5 cubic feet with second and third rows folded. Even with the third row up, there's more space than might be expected. Three checked bags with some carry-ons on top would fit easily.

Central to the technology offerings in the 2017 Durango is Chrysler's Uconnect system, which is definitely the best in the business. This begins with a 5-inch screen in the base model, which has basic functionality such as Bluetooth phone (but no audio). Every trim level above the base model has the 8.4-inch touchscreen with much more functionality.

The Uconnect system has a very user-friendly interface with a lot of everyday use built-in. Voice-to-text, which is a rarity even in luxury vehicles, is part of that usability. This allows the user to listen to and then use voice responses to answer text messages. Apps and other options are also available. 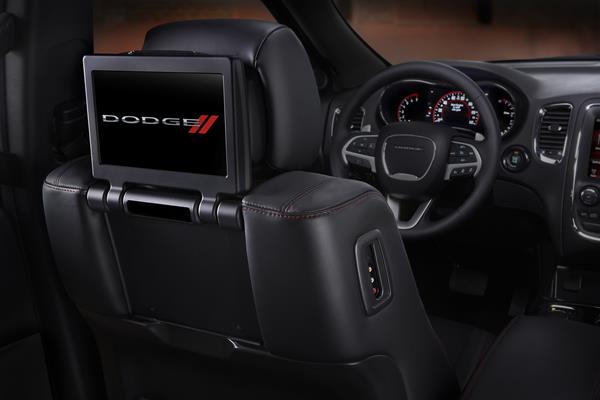 Fuel economy is definitely not the 2017 Durango's strongest point. The V6 engine returns 21 mpg combined, with 19 mpg in the city and 26 mpg on the highway in rear-wheel drive. That stays at 21 mpg combined in all-wheel drive, but changes to 18/25 city/highway.

The bigger V8 engine option lowers fuel economy further, to an EPA-estimated 17 mpg combined with 14 mpg in the city and 22 mpg on the highway whether rear-wheel or all-wheel drive is chosen.

Every year of this generation of the Durango has had the same J.D. Power and Associates rating in the Vehicle Dependability Study: "About Average." Although the 2017 Dodge Durango has not had any recalls (as of this writing), we are not cutting it any slack in scoring here.

The Durango has been doing well in crash safety tests. Last year's model, which is virtually identical to the 2017 model, did well. The 2017 Durango has received four out of five stars in its overall crash test rating from the National Highway Traffic Safety Administration. The only published result (so far) from the Insurance Institute for Highway Safety (IIHS) has been in rear crash testing, which rated it with a best score of "Good." Last year's model received that score on most of its crash test results from the IIHS and we expect that will carry forward.

There is a lot to love in the 2017 Dodge Durango when it comes to performance. Like most Dodge vehicles, a gamut of options are offered to please most buyer's likely needs. Most renditions can be had in rear-wheel drive (RWD) or all-wheel drive (AWD).

The base engine in the 2017 Durango is a well-proven 3.6-liter V6 that produces 290 horsepower and 260 foot pounds of torque. That's plenty of umph for the Durango's bulk in most situations and the 8-speed automatic transmission (also standard) is nicely matched to this engine's performance. Towing is rated at 6,200 pounds, which is likely best-in-class.

Opting for the Blacktop or Citadel trim models boosts the V6's horsepower output to 295, but otherwise does not change the Durango's capabilities.

In a 2017 Dodge Durango Citadel model, we saw 7.8-second 0-60 mph sprints. This translates to excellent freeway merge capability and plenty of passing power in most highway situations. Around town the transmission responds well and the "ghost shifting" the first models with the 8-speed were accused of a few years ago has been thoroughly resolved now.

The Durango composes itself very well on the highway and freeway, feeling solid and competent at all times. It's a good corner-taker, if not done with too much gusto, and sits high enough that visibility on the highway is excellent. Smooth and quiet are the words that best describe the Durango's demeanor at highway speeds.

Around town the 2017 Durango is a solid machine with a good presence. Its bulk becomes clear and visibility can be an issue if some driver's aids, such as parking sensors, are not included in your packaging.

Off the pavement the Durango is capable of moderate trail blazing, but off-roading is not its forte. It will get you down the dusty road and up that somewhat questionable dirt road to the lake, but it's not going to dig in the mud or rally like a champ doing so. 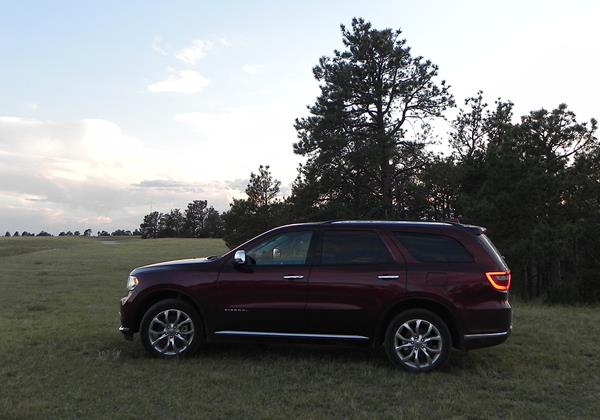 A stripped down base model 2017 Dodge Durango has a very low price of entry for this segment, but comes with little in return. At the mid and even upper levels, the Durango is often quite the value-oriented bargain in comparison with similarly equipped rivals. A good resale value helps boost that value as well.

A trim to avoid is the new GT, which is not often price-competitive with similar trims from rivals, but the SXT with added options and the luxurious Citadel are very good options. The V8-powered Citadel or R/T are nearly unrivaled in terms of finding a comparable in the crossover market, making then unique and thus desirable at later resale.

Because the 2017 Dodge Durango is unique, there are no direct competitors to it on the market. In its V6 form, it's comparable to crossovers, whereas with its V8 option, it's more comparable to traditional body-on-frame SUVs.

In terms of family-friendliness and ergonomics, the most direct competitor is the Toyota Highlander, which is a little better in interior ergonomics and a little worse in performance. The fun-filled Mazda CX-9 is also competitive in terms of performance. For towing and capability, it's SUVs, where the Chevrolet Tahoe (and its GMC twin) and the Ford Expedition are competitive in both interior volume and capability, but are also pricier as a result.

The 2017 Dodge Durango has a lot going for it despite being one of the oldest designs on the current market. Its interior comfort and technology have kept up with the trends and its family-oriented ergonomics are always going to be popular. For those who like it aggressive, the GT's look and the R/T's muscle are definitely stand-alone in the segment.