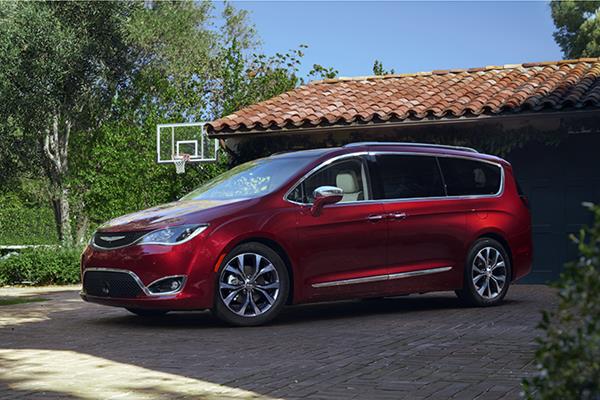 Overview (Final Score: A-)
If the Chrysler Pacifica's name sounds familiar, that's because a wagon-style crossover with that name was on the market in the mid-2000s. That vehicle was eventually dropped, but the name lives on in the all-new Pacifica minivan, debuting for the 2017 model year.

It seems odd for an automaker to be investing resources into a segment that appears stagnant at best, but minivans have not yet lost their luster with a large portion of buyers in America. Families are still often best served with a roomier, more upscale van than they are with a large crossover and the addition of a plug-in hybrid option for the Pacifica (coming late in 2016) may put this van over the top.

With a curvy exterior, roomy and ergonomic interior, and feel-good drive dynamic, the 2017 Chrysler Pacifica is a great new entry into the seemingly stagnant minivan segment.


What We Love About the 2017 Chrysler Pacifica


What We Don't Love About the 2017 Chrysler Pacifica 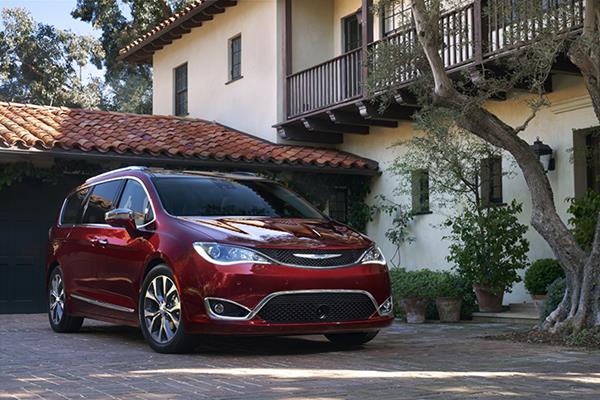 Exterior View (9/10 relative to market)
Minivans aren't generally known for their awe-inspiring looks. They are essentially small school buses with sliding doors, and that's not much to work with when it comes to exterior styling flair. Yet Chrysler has managed to join the ranks of some notables who've really pulled off unique looks in this segment. The Pacifica won't be mistaken for a sports car, but it's definitely more stylish than some of the other minivans you'll see.

The trick here was to take the new 2017 Pacifica and turn it into something other than a people-mover on the outside. Like the nerdy girl who becomes the knockout prom queen in a teen movie, the Pacifica adds some sporty flair to its edges and an almost muscle car stance to its look that gives it a unique and compelling appearance. For a minivan, anyway.

The front fascia is straight off of the Chrysler lineup of sedans, having a lot in common with the 200. Body design is akin to what's seen on the bigger 300 sedan with perhaps a few hints at sister brand Dodge's look for the Durango's side paneling. The large greenhouse of the Pacifica van is tapered and blackened, making it more subdued, and the rear wheel wells are sucked in and the wheels are pushed to the edges for a muscular, athletic appearance.

It's a good look overall, and few who see the 2017 Chrysler Pacifica are going to call it ugly and mean it. 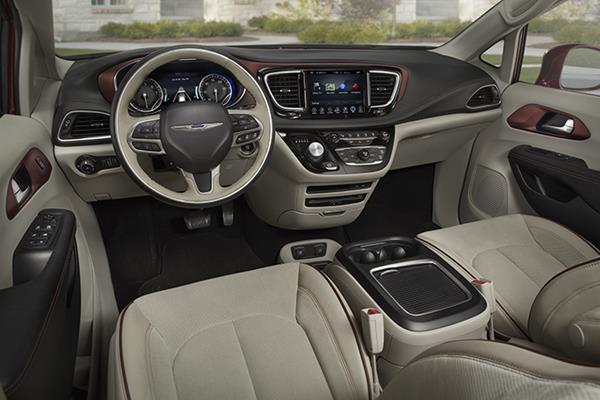 Interior Comfort, Quality, Ergonomics (9/10)
Words like upscale and roomy are often over-used in the automotive world, but with the 2017 Pacifica they are terms that fit well when describing the interior experience in this new minivan. The Pacifica's dashboard is lifted up and angled sharply on its base to make for a lot more room both visually and practically, and the lack of a center storage bin below the dash means there is a roomier feel. Not to mention a perfect place for a purse or laptop bag.

Materials quality is high in the 2017 Chrysler Pacifica, with multiple tones of color and texture creating a nice feel. Even in the lower trims. Storage bins and cubbies for gadgets, gear and stuff are plentiful and useful as well.

One high point in Chrysler's design, carried over from the outgoing Town & Country minivan, is the Stow 'n Go seating for the second and third rows. The second row captain's chairs quickly fold down and into the floor while the third row folds up and back and into the floor to make for a completely flat and low loading surface for cargo. This is a real boon. That second row can be boosted with a third seat added to the center to add one more passenger spot. That extra seat can be removed and stowed in the rear cargo in a special bin similar to Toyota's design in the Sienna. In all, seating in most of the positions in the Pacifica, including the third row, is adult-friendly and more comfortable than others in this class we've tried. Especially in the third row, which is traditionally too low or too narrow.

A couple of bonus items add to the interior experience. The second row can tilt forward and up, allowing easy access to the third row. And it does so without requiring that child safety seats be removed for the process. Other now-expected items for the class, such as self-opening doors and available built-in window shades, are also there. We especially like useful options such as the built-in vacuum behind the side door that stretches nearly 15 feet, allowing cleaning of not just the Pacifica, but a car parked next to it as well. The filter and catch bin are located at the rear hatch and replacement filters can be found at most home stores.

Cargo space is excellent in the Pacifica. It starts with 32.3 cubic feet behind the third row, which includes the deep bin created when the seats are out. This is ample for carry-on luggage and picnic coolers. With the third row down, a flat area of 87.5 cubes opens up with a low point of access above the bumper to make loading and unloading easy. Even with bulky objects. When both of the second row seats are stowed, that expands to a cavernous 140.5 cubic feet, allowing a full sheet of 4x8 plywood to lie flat on the floor between the wheel wells and with the hatch closed. That's probably class exclusive.

In all, the interior experience of the 2017 Pacifica is a good one and is one of the better you'll find in the segment. Trim levels for this new minivan are well-paced for varying budgets and needs. 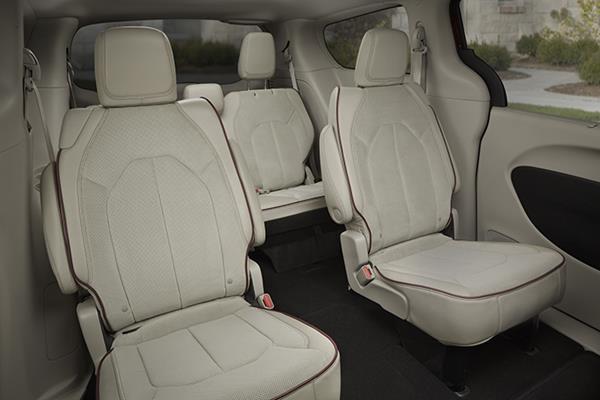 Technology (10/10)
The base model Pacifica begins with Chrysler's simple 5-inch touchscreen with basic connectivity and functionality for Bluetooth and radio use. Upgrading to most other trims or adding optional packages brings that to a much more modern 8.4-inch touchscreen with clear graphics and the industry-leading UConnect interface.

UConnect is one of the easiest infotainment systems to learn to use and responds quickly and well to most commands. Some voice control can take some getting used to, but features like speech-to-text and quick access to phone connectivity functions are a boon. If you cannot tell, we are big fans of how Chrysler has designed their infotainment.

For the back seats, the UConnect Theater option adds 10-inch (fixed) tablet-like screens to the second row that have built-in entertainment options such as competitive/cooperative games and the like. This package also adds a Blu-ray disc player, remote controls, and individual headphones tunes separately for each screen. Gaming consoles, smart devices, and even USB sticks with saved movies and such can be used as well. All with screen-specific plugs that are easily accessed from either the passenger's seat or the second row. Movies playing back from a USB device can be individually tuned for each screen as well, allowing you to pause and start again without interrupting the other's playback.

Chrysler definitely put a lot of thought into the design of the technology options within the 2017 Pacifica and it's paid off for them.


Fuel Economy (8/10)
The front-wheel drive Pacifica is EPA-rated at 22 mpg combined, with 18 mpg in the city and 28 mpg on the highway. This is about average for the segment, but the Pacifica held that combined number during our week-long drive of the van, telling us that these numbers hold in the real world.

Late in 2016, Chrysler will introduce a plug-in hybrid version of the 2017 Pacifica that will achieve class-leading fuel efficiency. Numbers for that version of the van were not yet available as of the writing of this review. 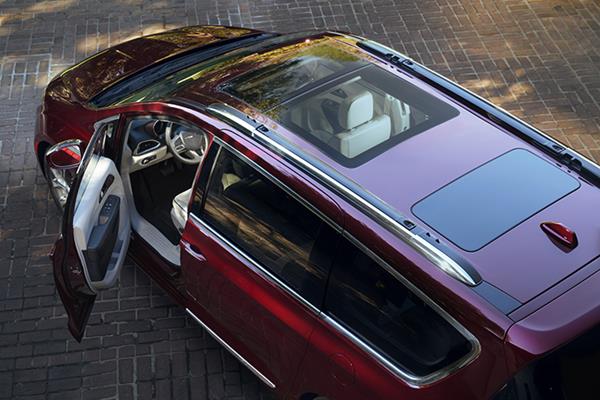 Predicted Reliability, Initial Quality Ratings (7/10)
There have been no published ratings for the Pacifica in regards to expected reliability and as an all-new model, it's difficult to gauge how it will do. The engine and transmission being used have mixed backgrounds in terms of reliability expectation, but are generally positive on that count. On the whole, Chrysler has a mixed history with new model introductions and dependability, so we are reluctant to judge based on the powertrain alone.


Safety (10/10)
Crash testing for the 2017 Chrysler Pacifica has shown positive results. Safety is a top priority with family vehicles like this one and earning a coveted Top Safety Pick+ rating from the Insurance Institute for Highway Safety is a good sign for the Pacifica.


Performance (8/10)
The 2017 Chrysler Pacifica is powered by a 3.6-liter V6 that outputs 287 horsepower and 262 pound-feet of torque. This goes through a 9-speed automatic transmission to the front wheels. Engine stop-start is also to become standard in Pacifica vans built later in the model year. Towing for the Pacifica, when equipped, is rated at 3,600 pounds.

Power output for the van is good for the segment, but better is the tight turning radius and well-controlled chassis of the van. The Pacific is surprisingly agile for its size and is one of the more fun minivans we've driven. Acceleration is good and about on par with others in this segment with V6 powerplants.


Pricing and Value (8/10)
Pricing for the 2017 Pacifica falls within the norms for the minivan segment, starting at around $29,000 and working up to well over $40,000 when fully loaded. For that, the Chrysler delivers a solid mix of upscale appeal and daily ergonomics that rivals anyone else in the lot. How great the value is for the purchase will depend largely on what is expected/desired from the van and the manufacturer's incentives at time of purchase.

In the low- and mid-level trim tiers, the Pacifica holds its own with a good mix of accouterments for the price. Our time in the Touring trim proved it to be worth its sticker price. 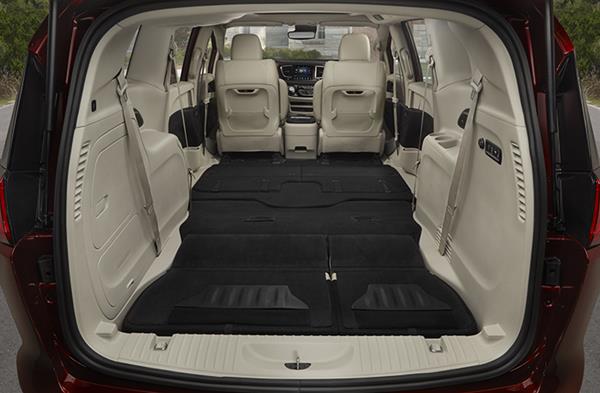 Total Score and Competitive Comparison (69/80, 75%)
The minivan segment has shrunk considerably from its once dominant place in suburban driveways. There are some great contenders on the market and the segment's rate of sales were high enough that Chrysler felt it worth investing considerable effort into an all-new design for a vehicle for it.

The competition in minivans is fierce, though, with the Toyota Sienna and Honda Odyssey dominating sales. The well-done Kia Sedona and the eye-catching Nissan Quest are also solid choices in this segment, but the Pacifica's mix of dynamic driving, excellent interior, and solid value options makes it a potential pack leader. Those fluid exterior looks don't hurt either.

We think that Chrysler has hit a solid flyball that may go out of the park with its new 2017 Pacifica.