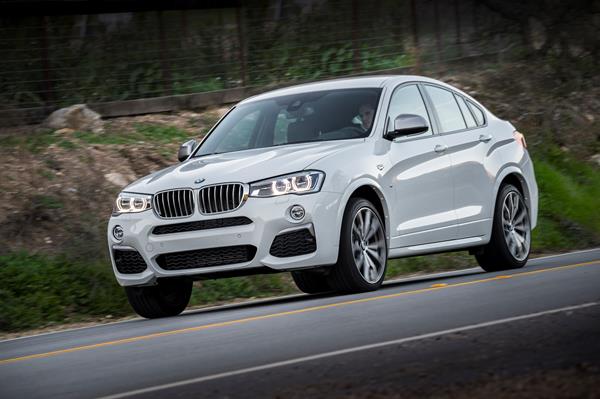 With the X4, BMW hoped to create a new ideal in crossover SUVs: a Sport Activity Coupe. BMW says the SAC is aimed at those who want the stability and assurance of all-wheel drive, and the ground clearance of a traditional crossover, but aren't interested in boxy styling or the soul-sucking bland drive of a bigger crossover. The 2017 BMW X4 is the latest version of the SAC ideal and it's obviously found an audience among luxury buyers.

Priced at the entry level and optioned up, the X4 can definitely be a fit for many buyers in today's luxury market. The five-seat crossover offers unusual style, a great drive dynamic and unexpectedly good fuel economy.

For those who think of the back seat of their ride being just an occasional-use thing and who want the drive quality of a well-done sports sedan combined with the capability of standard all-wheel drive, the BMW X4 is a perfect fit. It's coupe-like style and fast pace (even with the base model engine) will thrill those looking to get away from the contemporary.

The 2017 BMW X4 isn't for everyone, but it's definitely in a small group of options inside its small luxury crossover segment. 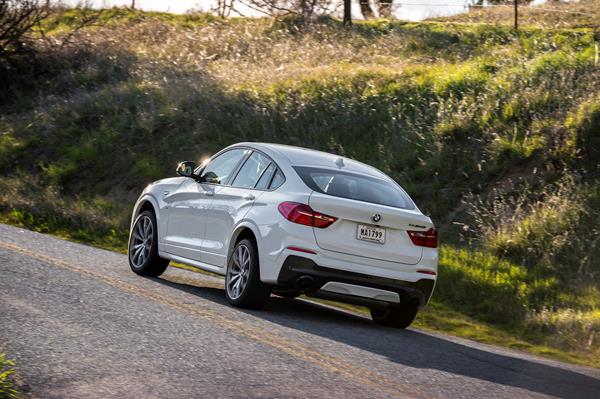 The BMW X4's exterior look is definitely an acquired taste. Some people love the wagon-cum-SUV look immediately, but many will require some time for it to sink in. Although odd, the X4's exterior does grow on you and it's unusual enough that onlookers will do a double-take. That kind of standing out has its own draw.

The flow of the 2017 BMW X4 begins with its front grille, which has a classic BMW double kidney. The headlamps run off either side of those, and a large but bumper-centric intake lies below. An aggressive front approach angle makes it clear from the get-go that this is a crossover, not a sedan or wagon, and the beefy front fenders continue that message.

The hoodline is simple and Germanic, adding some class to what would otherwise be a robust, dominating front face. A raked windscreen and relatively simple body mouldings keep that going, but the high ground clearance and accented rear fenders keep the eye above the ground while the large clearance spaces inside the wheel wells promise plenty of off-pavement cred.

The roof of the X4 is unusual in that it is a fastback style rather than a wagon or crossover hatch. There is a rear hatch, but it's sloped steeply making for a very curved roofline A light bump in the terminus at the rear gives the appearance of a trunk without making one. It's this side view of the BMW X4 that onlookers may find odd, resulting in a double-take.

There has never been a reason to besmirch the build and materials quality of a BMW, and we won't start now. The materials used in the 2017 BMW X4 are top notch and the workmanship is as good as it can get. The wide center console makes for a sporty feel that fits the X4's mission, and the flow of the dashboard and doors is pure BMW. Seating in the front is comfortable, whether in the standard or the extra-bolstered M Sport model. Driver's controls are well placed, and gauges and infotainment are easy to see. 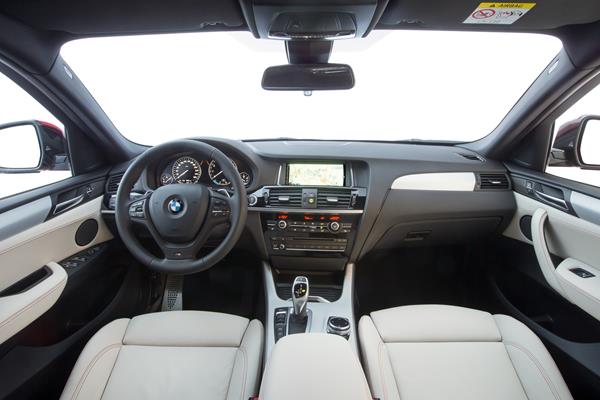 The rear seats are an issue, as is the cargo space. The back seats of the X4 are low, in hopes of adding more headroom thanks to that aggressively sloping roofline. This does accomplish that somewhat, but anyone over six feet will feel cramped. The high-knee position rear seat passengers are thus subjected to only makes things worse. Children and the family dog will be fine, but adults won't sing praises to the BMW X4's rear seating.

The unusual roofline means that the rear cargo is more like a trunk than a hatchback. There is only 17.7 cubic feet of storage space there, and when the rear seats are folded, that expands to 49.4 cubes. That's more on par with a compact sedan than it is with a crossover.

We aren't knocking the 2017 BMW X4 for its rear seats or cargo space as much as we would were this meant to be a more versatile vehicle. After all, most buyers of the X4 are going to be more motivated by the vehicle's look than practical considerations.

For the most part, the central infotainment system in the X4 is well done. The base option comes with a good-sized, clear output screen that offers enough functionality that anyone not requiring navigation will likely feel well accommodated. But without the iDrive controller, that base infotainment can become a little clunky to operate.

The enhanced system, available in the Technology package upgrade available to all X4 models, makes the screen a bit larger and adds the iDrive controller for an easier interface. That controller is a command knob located ahead of the driver's hand when the arm is on the central console's armrest. The upgrade also includes navigation, a larger driver information display in the instrument cluster, and a head-up display that reflects from the lower windscreen to give the driver eyes-on information.

What really works well with the upgrade is the added smartphone integration and app inclusion plus the BMW Remote Services feature with the BMW app. This gives remote vehicle access via smartphone, allowing, for example, an owner to give a friend access to get something out of the car without being nearby. This feature seems arbitrary until it's used regularly. The user can also pre-set climate controls and other things.

Overall, the technology in the BMW X4 does require some learning time to get used to, but it's nicely done and quick to use once mastered. 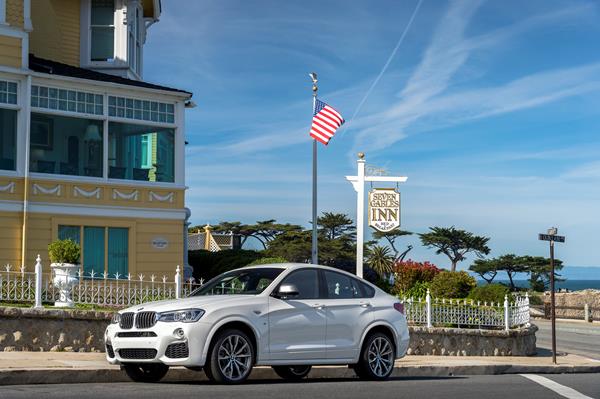 The EPA gives the 2017 X4 in all its standard variants a rating of 23 mpg combined, with 20 mpg in the city and 28 mpg on the highway. In the real world, we kept close to those numbers in everyday driving at 22 mpg all told.

The sport version, the BMW X4 M40i, is EPA-estimated at 21 mpg combined due to its higher performance engine.

The 2017 BMW X4 is considered "About average" in the J.D. Power and Associates Vehicle Dependability Study results. It received three out of five points in the Power Circle Rating they issue.

The warranty for the BMW X4 is unusually good for the segment, at four years and 50,000 miles, which is about a year longer than most rivals. One safety recall was made early in the 2017 X4's production for child safety latches.

There are no crash test results for the 2017 BMW X4 to report, as neither the National Highway Traffic Safety Administration nor the Insurance Institute for Highway Safety have released any information for the vehicle. The X4 does have a full suite of available safety options and driver aids that include advanced mitigation and braking. 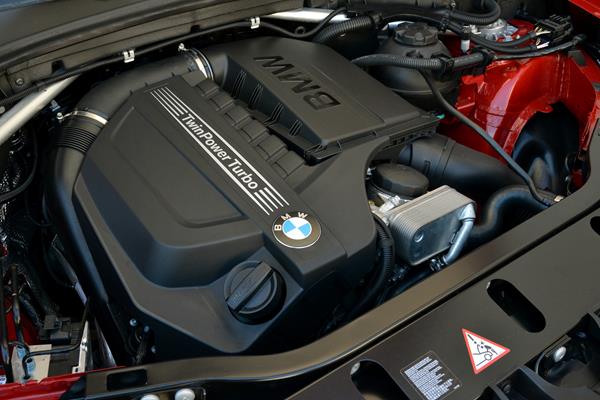 Where the BMW X4 doesn't skimp is performance. The 2017 model is powered by a turbocharged 4-cylinder engine displacing 2.0 liters and producing 240 horsepower and 260 foot pounds of torque. Standard with that are an 8-speed automatic transmission, all-wheel drive and engine stop/start for in-city fuel economy. This setup will propel the X4 to 60 mph in about 6.5 seconds.

The sport variant is the M40i model with a 3.0-liter turbocharged inline-six that outputs 360 hp and 343 lb-ft of torque. All-wheel drive with an 8-speed automatic remain standard, but 0 to 60 mph times are reduced to under 5 seconds. Few in the X4's segment can rival that kind of sprint.

Going with that sportiness in the 2017 X4 is the kind of well-tuned suspension and steering one would expect from BMW. For nearly every buyer, the base model X4 with the M Sport additions is more than enough to make one feel like an off-duty race car driver. The 6-cylinder, though powerful, is more about bragging rights than need. BMW has taken turbocharging to high levels and the 240 horses coming out of the 2.0-liter are plenty for the X4 and the 260 pounds churning the wheels will push everyone back in their seats easily.

On the road, the 2017 BMW X4 is agile and fun to drive. Some rivals may have a more sporty appeal in terms of tightness and stiff cornering, but the X4 can keep up with most. Off the road, the X4 is not as capable as some true crossover-SUVs in the segment, but is still capable enough to do fine on a dirt road or in light off-roading. We learned the X4 does well in inclement weather, which is probably more in line with what buyers in this segment would want.

The 2017 BMW X4 has a reasonable entry price for the segment and will find most buyers optioning up to about $50,000 or so on average. The highest end for this Sports Activity Coupe nears $60,000 with the M40i model when fully outfitted. It's a bit early in the X4's life as a model to know what its resale would be, but it will likely be relatively low as are resale values for most luxury cars.

Value is subjective and most buyers of the BMW X4 are in it for the styling rather than for any quantifiable value metric. For that reason, we're not hitting the X4 too hard in this section. 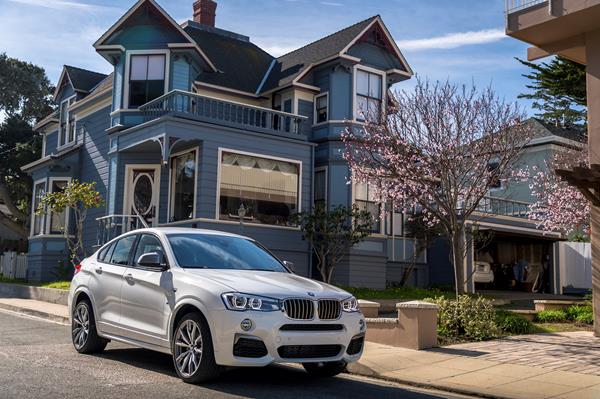 There are plenty of options to choose from in the fast-growing small luxury crossover segment. The BMW X4 offers a unique option with its wagon-like styling and crossover-like capability with a very sporty mission statement. If the "utility" in sport utility is important to you, however, the X4 is definitely not going to fit.

Probably the chief rival for the X4 is its nearly identical BMW X3 stablemate that sits in the lot next to it at the dealership. The X3 is a more contemporary crossover with the expected utility, but doesn't offer the M40i's six cylinders of fury or the sportier drive of the X4. Other rivals include the fleet-footed Jaguar F-Pace and the couped-out Mercedes-Benz GLC43 AMG. Both are performance rivals.

In the end, most buyers in the segment who are looking at the X4 as an option are likely not as interested in the versatility of a crossover, but are more inclined to consider style and drive. With that buyer in mind, the Sport Activity Coupe ideal that BMW is aiming for is definitely exemplified.