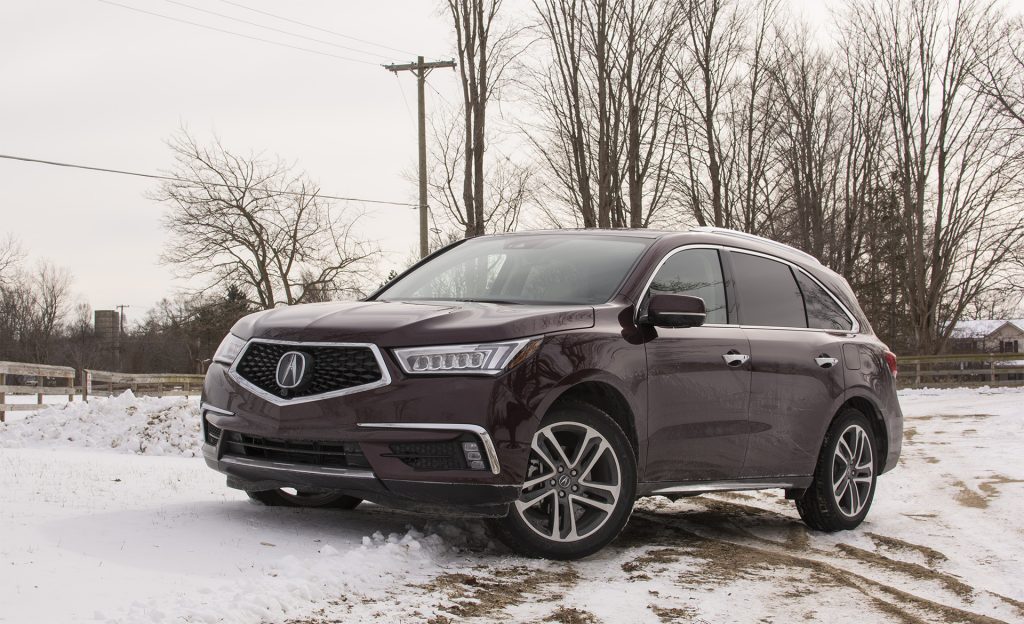 Acura was one of the first luxury automakers to enter the midsize crossover arena with the three-row MDX back in 2001. It would become one Acura's best-selling models as it offered owners something that is well-rounded and competitively priced against the competition. Since then, the number of luxury brands throwing their hat into the ring has grown. This has caused the old guard such as Acura to figure out ways to combat against this growing threat.

For 2017, Acura has given the MDX a new face, additional safety equipment and other changes to keep it ahead of everyone else. Let's see if it makes a difference. 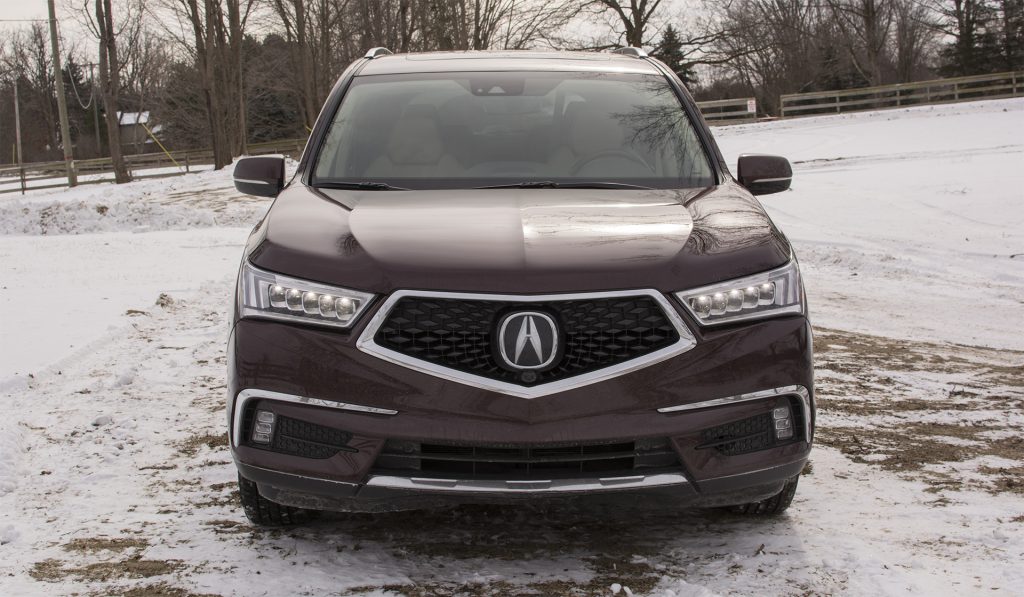 For 2017, the MDX went through a mid-cycle refresh that included a new "diamond pentagon" front grille that originally debuted on the Acura Precision Concept at the 2016 Detroit Auto Show. This will take the place of shield grille that has been part of MDX since 2009. While the new grille does look slightly less polarizing than the shield grille, it somehow makes the MDX look cartoonish.

One item that we're happy to see is the unique Jewel-Eye headlights that help the MDX stand out. The rest of the MDX's shape remains mostly unchanged from its 2014 redesign, with a sloping roofline and clean looking tailgate with chrome exhaust ports. Our MDX tester featured 20-inch wheels that look sharp and fill in the wheel wells quite nicely. 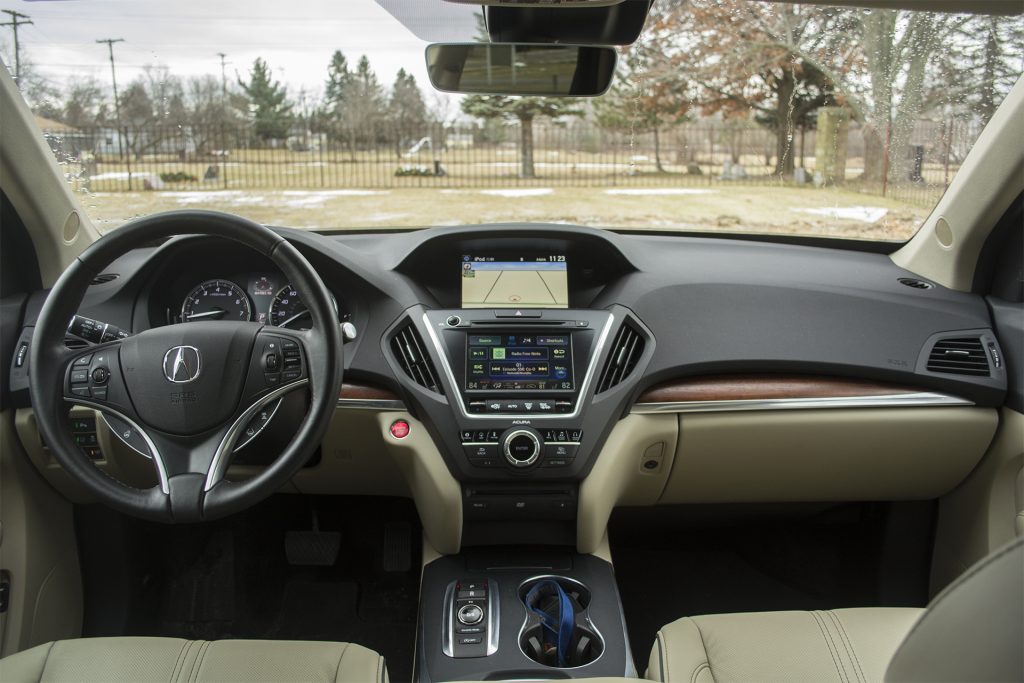 Acura does a decent job when it comes to the MDX's interior. Our Advance & Entertainment Package tester featured open-pore wood trim and leather upholstery with contrasting piping that adds a nice touch of class. But compared to European competitors, we found ourselves wishing Acura had gone a little bit further in terms of interior appointments. Take for example the dash. It is very plain looking and features only a slim amount of wood and silver trim. Imagine how much nicer it would have been if Acura added some stitching or flashier design. At least there an abundance of soft-touch materials and build-quality is top notch.

The MDX is one of the few models in the midsize luxury crossover class to offer three rows of seating. Most models featuring seating for seven via two bench seats for the rear. But if you have an MDX with the Entertainment package, the second row bench seat is swapped for two captain chairs, dropping seating capacity to only six.

Those sitting up front will find supportive seats and power adjustments (10-way for the driver, 8-way for the passenger) to help dial in the right position. Second-row passengers will find plenty of head and legroom. Getting into the third row is easy thanks to single-press buttons that slide the second row forward. Space in the third row is best reserve for small kids due to the lack of legroom.

With all three rows up, the 2017 Acura MDX offers 15 cubic feet of space, which is a bit small when compared with competitors. Fold the third row and space increases 38.4 cubic feet, a respectable amount for most people. Maximum cargo space stands at 68.4 cubic feet. 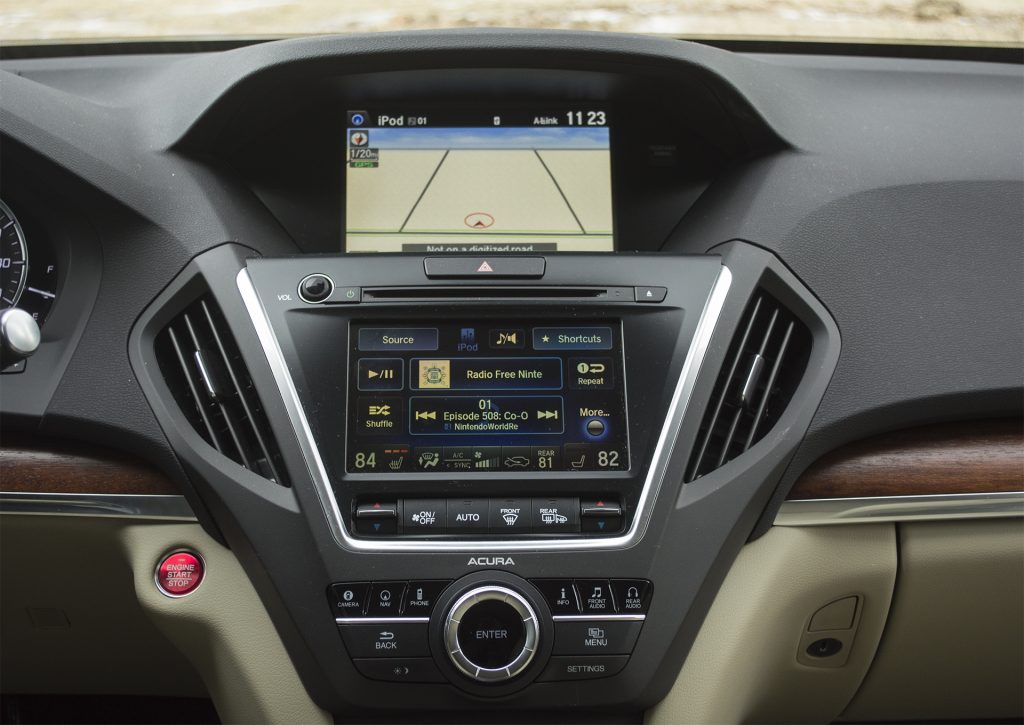 Acura equips the MDX with two touchscreens for the AcuraLink infotainment system. The lower screen is a s 7-inch touchscreen, while an 8-inch non-touchscreen sits above. Most of the time you'll be using the lower screen to control the climate control system and certain audio settings. Other settings require a multi-step process involving both screens. Take for example choosing a track on your iPod or USB device. You need to use the top screen and a control knob to go through the various menus to find the track you're interested in. Not only does this take up a lot of time, it also causes your eyes to be taken off the road. The lack of Android Auto and AppleCar puts the MDX behind a number of its competitors.

Our test MDX Advanced featured the Entertainment package, which nets you a 16.2-inch widescreen entertainment system. The beauty of this system is that it can display two different images. One passenger could be watching a movie, while the other could be playing a video game through the HDMI hookup. We have to wonder if systems like this make sense anymore, considering more and more people are turning to smartphones and tablets to keep kids entertained for long trips.

The Acura MDX equipped with all-wheel drive is rated at 19 City/26 Highway/22 Combined, putting it towards the top of the class. Our average for the week landed around 23 mpg with a 60/40 mix of city and highway driving.

The current MDX doesn't come with the same high reliability history as its predecessors. Both Consumer Reports and J.D. Power rate the 2017 Acura MDX as having average reliability. In terms of initial quality, the MDX gets an average rating from J.D. Power. 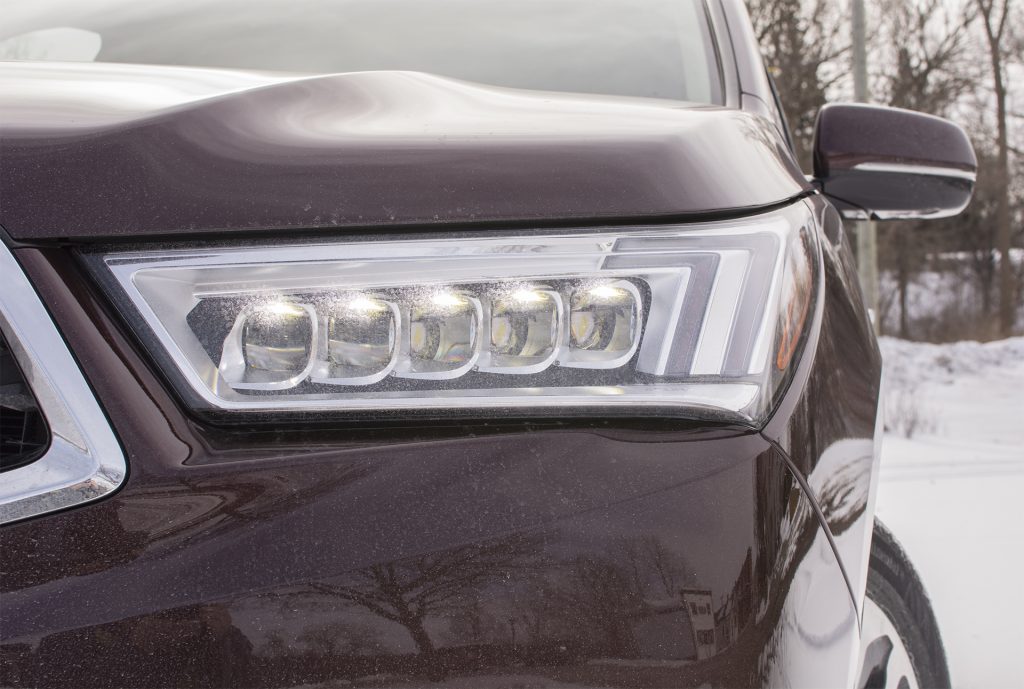 If you want a safe luxury crossover, then the Acura MDX needs to be near the top of your list. Both the National Highway Traffic Safety Administration and Insurance Institute for Highway Safety have given the MDX their highest honors: 5-Star overall rating and a Top Safety Pick+.

For 2017, Acura has made the AcuraWatch suite of active safety features standard on all MDX trims. This gets you collision mitigation braking, lane departure warning with lane keep assist, road departure mitigation and adaptive cruise control.

Other safety features include a full suite of airbags, backup camera, traction control and stability control. Disappointingly, blind spot monitoring with rear-cross traffic detection, parking sensors and automatic high beams are only available on higher trims. We think these features should be standard as well. 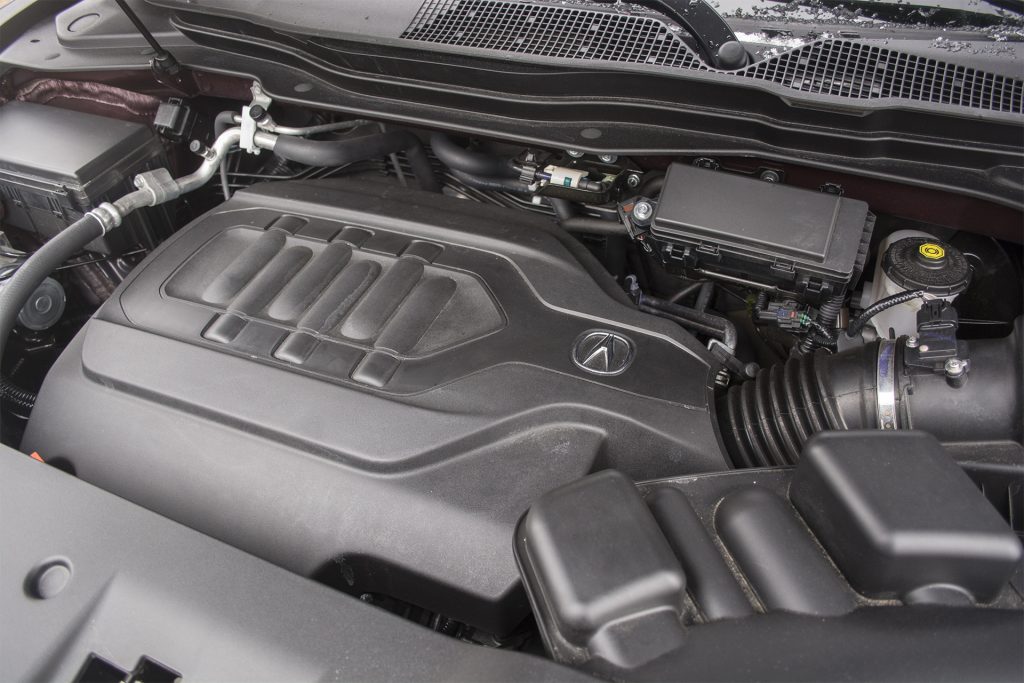 At the time of this writing, the MDX was only available with a 3.5L V6 offering 290 horsepower and 267 pound-feet of torque. This is paired with a 9-speed automatic and the choice of front- or Acura's super-handling all-wheel drive (SH-AWD) system.

This spring will see Acura introducing a new Sport Hybrid model that pairs the 3.5L V6 with a hybrid system. This system produces a total output of 321 horsepower and 289 pound-feet of torque, along with improved fuel economy figures.

The V6 is a sweetheart of an engine, as it delivers power smoothly and steadily. Models with the Advanced package get an automatic stop-start system to improve fuel economy, but we found it to be a hindrance as there was a noticeable delay from when we took our foot off the brake and the engine starting back up.The good news is this system can be turned off.

The 9-speed automatic transmission needs some work as gear changes aren't as always smooth at low speeds. Not helping matters is the transmission being somewhat slow when it comes to downshifting. At least there are paddle shifters that you allow you to downshift yourself. The SH-AWD system fitted to our tester is one of the best all-wheel drive systems we have come across. Not only does it quickly shift power around to help you give you more grip on slick roads, but it also helps the MDX corner much sharper around corners.

Acura has gotten praise for making the previous-generations of the MDX very fun to drive, but the current generation loses some of that. It comes down to the steering, which feels lifeless. The lack of any weight, along with limited road feel doesn't give the same confidence as you would find in older MDXs. The suspension is tuned in such a way that it minimizes body roll when cornering, while delivering a ride that is very comparable to a luxury sedan during the daily drive. Wind and road noise are kept to very acceptable levels.

The 2017 Acura MDX lineup begins at $44,050 for the base front-wheel drive model. Adding SH-AWD increases the price by $2k. Our MDX SH-AWD with Advance & Entertainment Packages came to an as-tested price of $59,475 with destination. It is quite expensive and one that doesn't hold up when pitted against the competition. For most people, the MDX with Technology Package is the one to go for because it nets you the features you would expect to find in a vehicle of this type, along with getting the blind-spot monitoring and parking sensors. 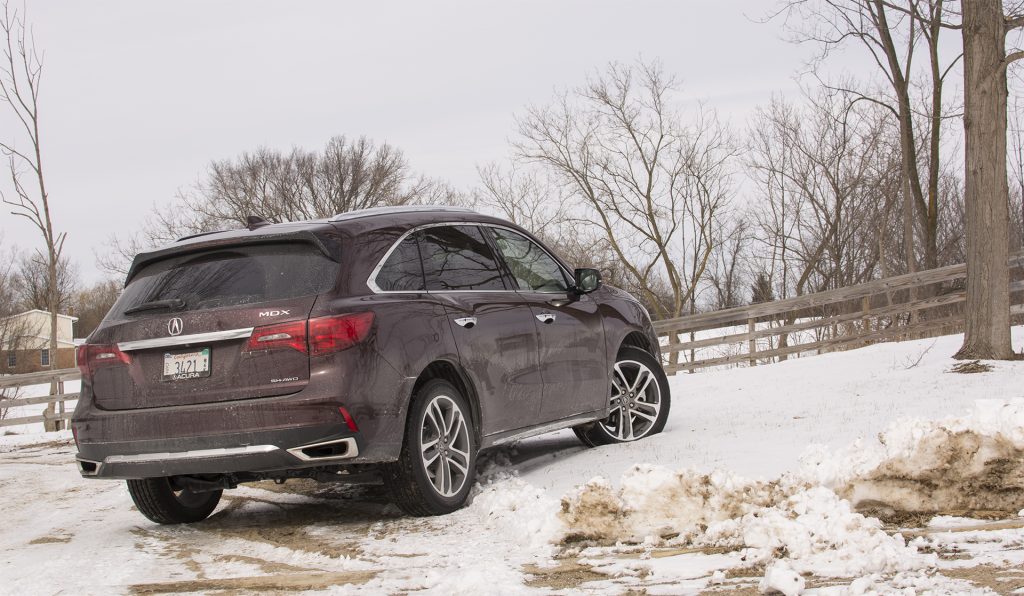 Audi's Q7 is considered to be the gold standard when it comes to midsize luxury crossovers. It offers quick performance, decent fuel economy figures, a plush interior and loads of high tech goodies. However, the Q7 comes with a higher price tag than the MDX at $49k. The Volvo XC90 possibly has one of the best interiors, along with a distinctive exterior shape, long list of safety equipment and a base price that is in line with the MDX.

The Acura MDX is the safe choice in the luxury midsize crossover class. It offers plenty of practicality for passengers and cargo, smooth performance for the V6 and a nicely balanced ride. But we can't help but wonder what if Acura smoothed out the 9-speed transmission, worked on the steering and improved the infotainment system. Could this catapult a middle-of-the-road crossover to the top? Maybe.