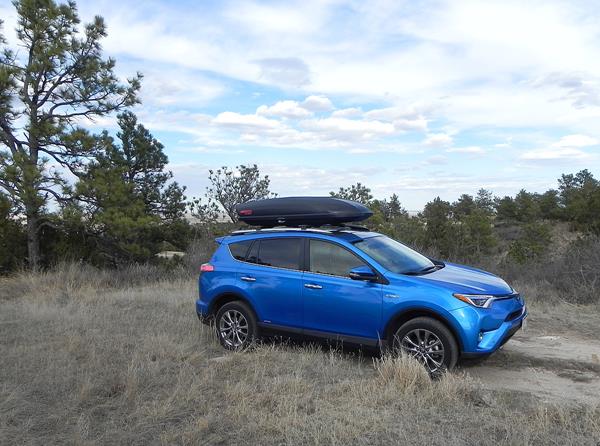 Overview (Final Score: A-)
For the 2016 model year, Toyota gave a refresh to the RAV4 lineup of crossovers. One surprise addition was the RAV4 Hybrid, however, which leaps ahead of the pack with its high fuel economy and relatively few tradeoffs to achieve that. This is a surprisingly good hybrid from the company that most of us now associate with hybrid powertrains.

The 2016 Toyota RAV4 Hybrid seats five passengers, has ample cargo space, and comes in two trim levels comparable to the upper-tier trims in the rest of the RAV4 model line. The XLE includes a host of standard features sure to appeal to cost-conscious buyers who want the hybrid efficiency whereas the Limited trim will have everything a near-luxury buyer could ask for.

The 2016 RAV4 Hybrid sets a new bar for the segment. One that won't likely be met by any of the competition anytime soon.


What We Loved About the 2016 Toyota RAV4 Hybrid


What We Didn't Love About the 2016 Toyota RAV4 Hybrid 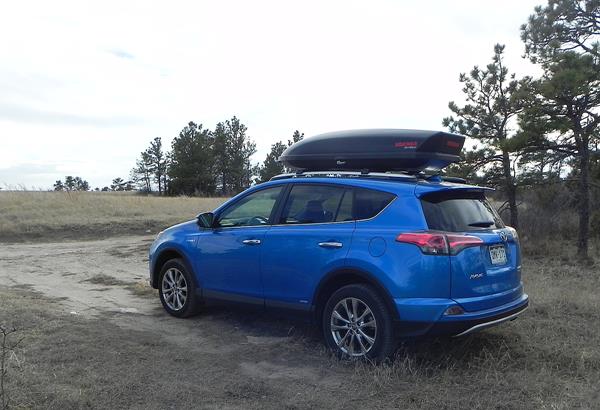 Exterior View (8/10 relative to market)
The 2016 Toyota RAV4 Hybrid's exterior looks almost identical to its non-hybrid stable mates, with only a few cues such as the hybrid badging and the blue-backed Toyota logos giving away its battery-packing nature. The entire RAV4 model line got a refresh this year to updates its look from its latest redesign (made in 2013). The front fascia is more aggressive with a smaller grille, bigger lines, and sharper headlamps. A few other changes soften the appearance a bit while retaining the heavy-handed style that made the new RAV4 popular.

The 2016 RAV4 has a sharp face, flattened, low hood with high fender ridges, a fast-sweeping windscreen, and a coupe-ish body style that looks very sporty on a crossover of this size. An exaggerated beltline with a shelf-like edge and in-cut rear windows to counter the rounded rear hatch finish the look. It can be polarizing, but seems to be popular amongst consumers.

Our test model also included the integrated roof rails (to which a Yakima cargo box was attached) and the 18-inch alloy wheels to be found on the Limited trim level. 17-inch wheels are standard on the Hybrid XLE. 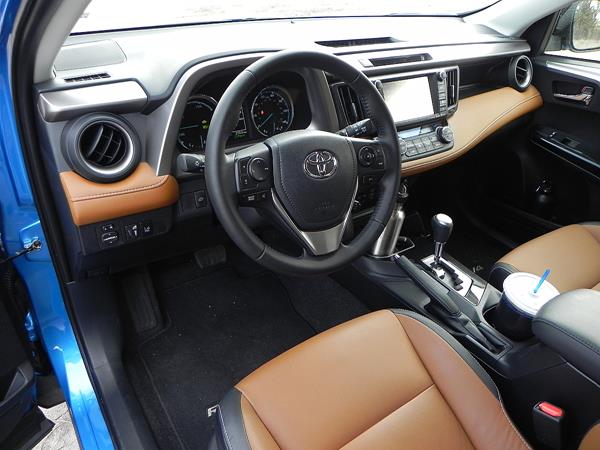 Interior Comfort, Quality, Ergonomics (9/10)
The interior of the 2016 RAV4 Hybrid is well done with a decidedly upscale appeal. Materials quality is good throughout and the lifted dashboard with its European styling creates an airy feeling. There are a host of standard features to go with the RAV4 Hybrid, even at the lower XLE trim point.

Ergonomics for passengers is very good and for the driver is better than in some other Toyota models. The 2016 RAV4 Hybrid features standard equipment like tilt-telescoping steering, 60/40 split rear seating, a remote power liftgate, keyless entry and ignition, and a six-speaker audio system. The driver's seat is nicely adjustable, including for height. Added upgrades for the Limited trim include several driving and parking aids, synthetic leather upholstery, adaptive cruise control, and an eight-way power-adjustment driver's chair.

The front seating is very good in the RAV4 and the rear seats are better than expected for a crossover of this small size. Most adults will be able to sit in the back seat without issue, though taller folks may begin to feel cramped. Child safety seats are easy to install.

Cargo space is another high point for the RAV4 Hybrid's interior, ringing in at 35.6 cubic feet with the seats up and 70.6 with the seats folded. Very good for the class.


Technology (8/10)
The base model RAV4 Hybrid includes a 6.1-inch infotainment touchscreen that has basic functions to include Bluetooth connectivity. Moving up to the Limited edition or an upgrade package changes the screen to a larger 7-inch touchscreen that includes Toyota's full suite of Entune apps as well as navigation.

The Entune suite is easy to use and fairly fast on the uptake, doing most things well. Integrating smartphone apps and using them can be a bit tricky at times, but not horribly so. It's a nice bundle of apps for the price and will match the needs of most users. We were impressed with how well it interacts with the Android app from Toyota. 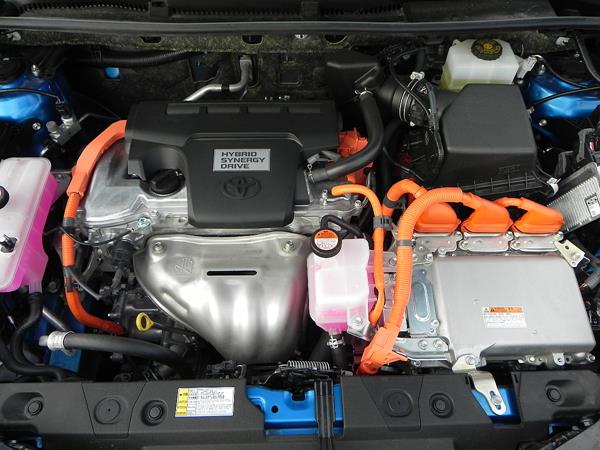 Fuel Economy (10/10)
When it comes to fuel efficiency, the 2016 Toyota RAV4 Hybrid literally has no competition. The EPA rates the RAV4 Hybrid at 33 mpg combined, with a 34 mpg city and 31 mpg highway rating. In the real world, we saw about 31 mpg all told with a heavy mix of highway driving and while toting a large luggage carrier on top of the vehicle. Surprisingly good returns for an all-wheel drive crossover of any size.


Predicted Reliability, Initial Quality Ratings (9/10)
The RAV4 Hybrid has not been specifically named in the Vehicle Dependability Study that J.D. Power and Associates produces annually. Its gasoline cousin has, however, and received a Better Than Most score. This prompts us to believe that, given the high reliability of other hybrid models in the Toyota line, the RAV4 Hybrid will likely return the same. So we rate it high for expected reliability.


Safety (10/10)
The Insurance Institute for Highway Safety has crash-tested the RAV4 Hybrid and given it top scores on every point. This makes the 2016 RAV4 Hybrid a Top Safety Pick Plus recipient, the highest honor the IIHS offers.

The National Highway Traffic Safety Administration has not crash tested the RAV4 Hybrid, but has done so with the gas-only powered RAV4 with similar high marks. For this reason, we believe that the RAV4 is worthy of a top score for safety, especially given that the Hybrid model includes most of the advanced safety features offered for the vehicle. 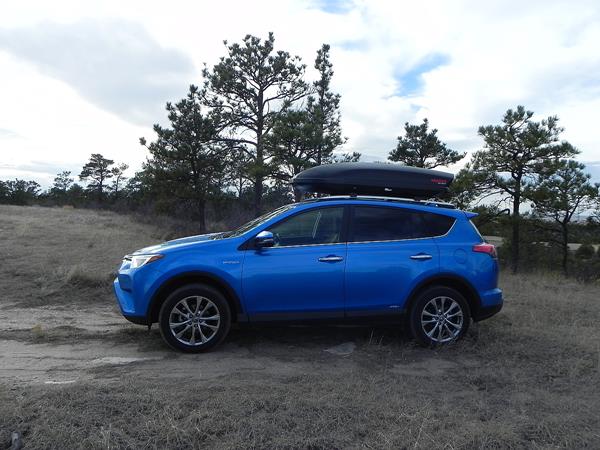 Performance (8/10)
The 2016 RAV4 Hybrid is powered by Toyota's Hybrid Synergy Drive with a system taken right out of the Camry Hybrid and modified to suit the crossover. A 2.5-liter four-cylinder engine starts things off and an electric motor in the transmission and one on the rear axle complete the powertrain. The transmission itself is a continuously variable (CVT) and the whole system outputs 194 horsepower in all.

During most driving, the RAV4 Hybrid is front-wheel drive engaging the rear axle (via its motor) only when needed. This action is seamless and works very well. Our only concern was that the CVT sometimes struggles at highway speeds, especially on hills, and the powertrain, while quick on the uptake, becomes a bit more sluggish at speed. Not enough that drivers won't feel confident in passing and merging, but enough that it's noticeable.


Pricing and Value (9/10)
Because the 2016 RAV4 Hybrid is available only in two relatively upscale trims, the XLE and Limited, its price point is fairly high compared to gasoline counterparts. The accoutrements included for the price, though, still hold great value by comparison. Add in the excellent fuel economy and the high resale value Toyota vehicles generally enjoy and the RAV4 Hybrid is, for the most part, a good value for the money. Although it's not a fit for every lifestyle, it is likely to be appealing to most in the small crossover market and thus is worth putting on a short list of options to buy. 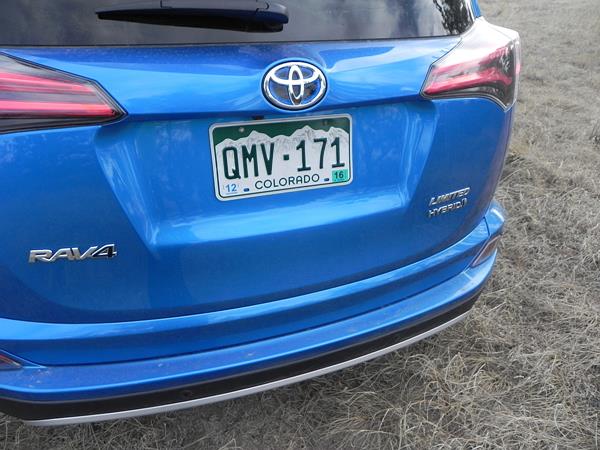 Total Score and Competitive Comparison (62/80, 77.5%)
The closest competitor to the 2016 Toyota RAV4 Hybrid is the Subaru XV Crosstrek Hybrid. That vehicle has similar fuel economy, but is smaller and less driveable as well as less upscale than is the Toyota. The wagon-based Crosstrek is only marginally comparable, making an apples to apples matchup unrealistic. The RAV4 Hybrid is unique in its class.

The revamp given to the RAV4 this year helped it boost its looks and appeal, but the addition of the Hybrid model really took the RAV4 up a level. Most will find this option compelling for its high fuel economy returns and excellent ergonomics. There are few tradeoffs for the hybrid option in comparison to the gasoline models of the RAV4, especially when shopping in the upper-tier trim levels.