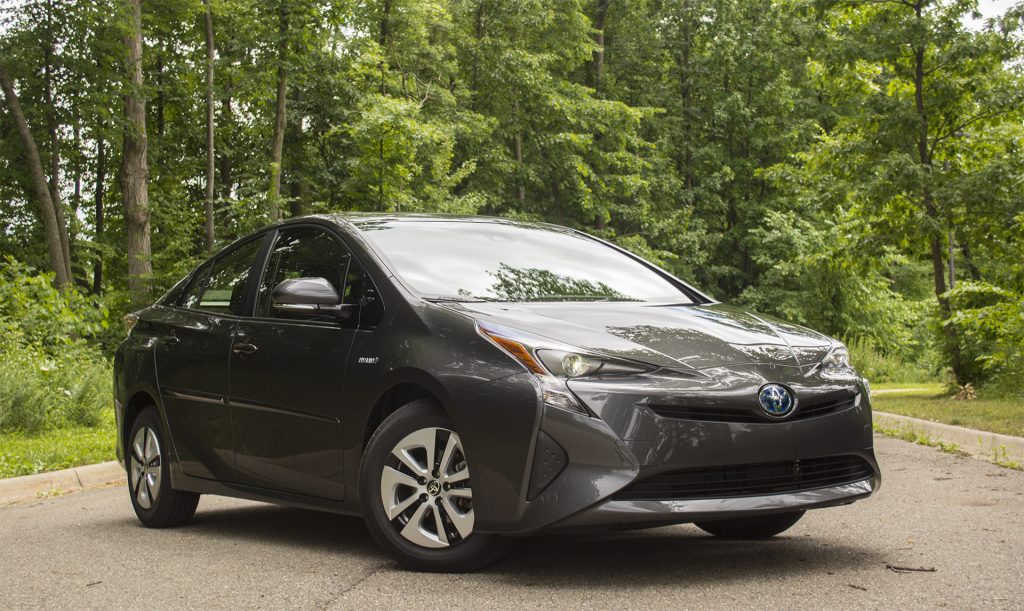 It might not have been the first hybrid vehicle sold in the U.S. (that honor goes to the Honda Insight), but the Toyota Prius has cemented itself as being the gold standard for them. You might think this may cause a manufacturer to rest on their laurels, but not Toyota. Last year saw the Japanese automaker introduce the fourth-generation Prius that brings a number of key improvements in the powertrain and aerodynamics. But other changes for the interior and chassis help make it a better car overall.


What We Love About the Toyota Prius


What We Didn't Love About the Toyota Prius 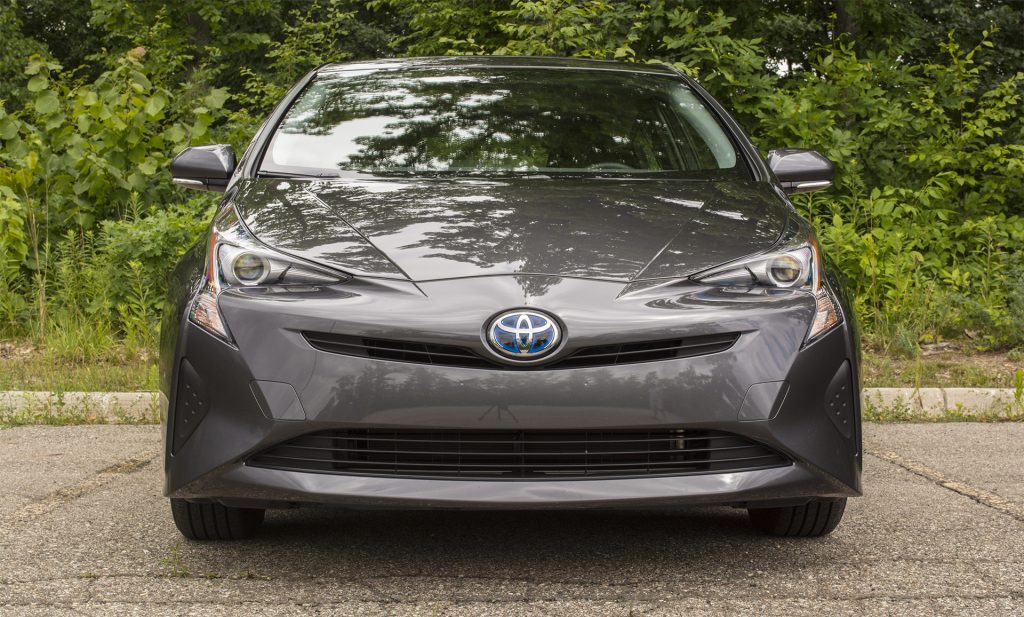 The design of the latest Prius is polarizing, to say the least. You might think there isn't anything on the road that is remotely similar to the Prius' design, but that's where you would be wrong. A lot of the inspiration for the new Prius comes from Toyota's Mirai hydrogen vehicle. Take for example the side profile. Both models share various design cues such as a belt line that rises from the front doors to the tailgate and uniquely styled rear fenders. The front end reminds us slightly of a toy mouse you give to cat to play around with the Toyota emblem right smack in the middle and headlights that blend in neatly with the front.

Compared to the last-generation Prius, the new model cuts through the wind better - the coefficient of drag has dropped from 0.25 to 0.24. The body also sits about 20mm lower. 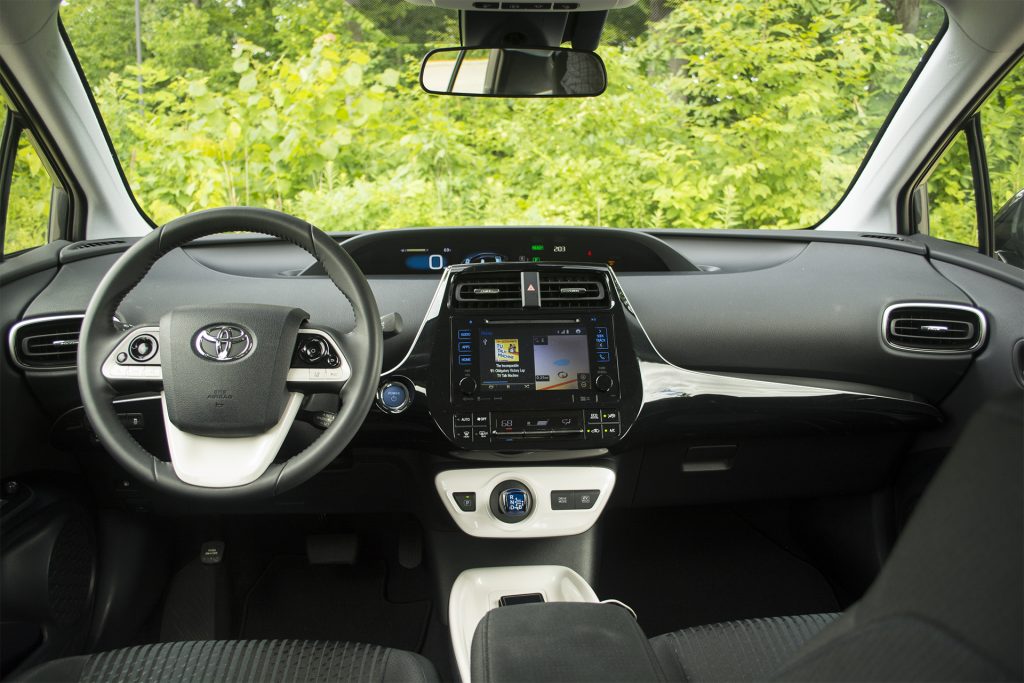 Interiors of past Prius models were very much an afterthought. From very questionable material choices to a very odd placement of the front seats, you could tell Toyota's focus was on the efficiency of the vehicle and not providing a comfortable place to sit in. Thankfully with the forth-generation Prius, Toyota has put forth some effort for the interior and it shows. For example, designers added some stylistic touches such as chrome trim around the vents and contrasting black and white trim for the center stack and console. Interior materials also see a noticeable improvement with more soft-touch plastics on the door panels and dashboard.

One item we were glad to see Toyota address is the seating. Sitting up front in an older Prius was slightly uncomfortable due to the raised seat and upright posture. For the new model, the seat has been lowered and slightly angled. The end result is a better driving posting that won't cause you to feel uncomfortable during long trips. Space in the back has shrunk when compared to the last-generation Prius. Legroom is down by two inches and headroom comes at a premium if you go for the optional sunroof. Cargo space has seen an increase of three cubic feet to a total of 24.6 cubic feet with the rear seats up. Opt for the Prius Two Eco or Four and space increases to 27.3 thanks to the spare tire being removed. 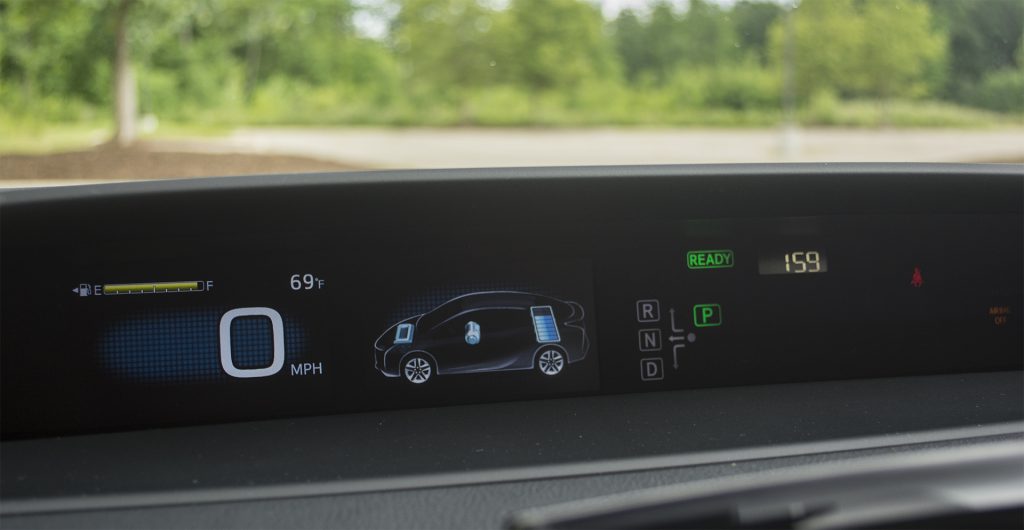 The Prius' technology story begins in the center stack where a seven-inch touchscreen with Toyota's Entune infotainment system resides. Our tester featured the optional Entune system with navigation. We like Entune for its simple interface and fast performance. We not too keen on the graphics as it makes the system look slightly older than it is. Also, there isn't a dedicated button to take you straight to the navigation system. You need to go into the ‘Apps' section and hit the Nav button or go to the home page and hit the nav overlay.

Look above and you'll see one of the major changes Toyota made for the Prius. The microwave-inspired gauges have been swapped for two 4.2-inch color displays. The left one shows speed and basic trip information. The right one provides driving data, powertrain diagram, and tips on improving overall fuel economy. The screens are vibrant and easy to read at a glance.

The key reason you buy a Prius is for the fuel economy figures and the new one doesn't disappoint. The EPA says the Prius will return 54 City/50 Highway/52 Combined. We were shocked how easily you can match and even beat the EPA figures. Our average for the week was an astonishing 60.2 mpg. If you want to eek out a bit more mileage out of a gallon of gas, then take a look at the Prius Two Eco that boasts EPA figures of 58 City/53 Highway/56 Combined. 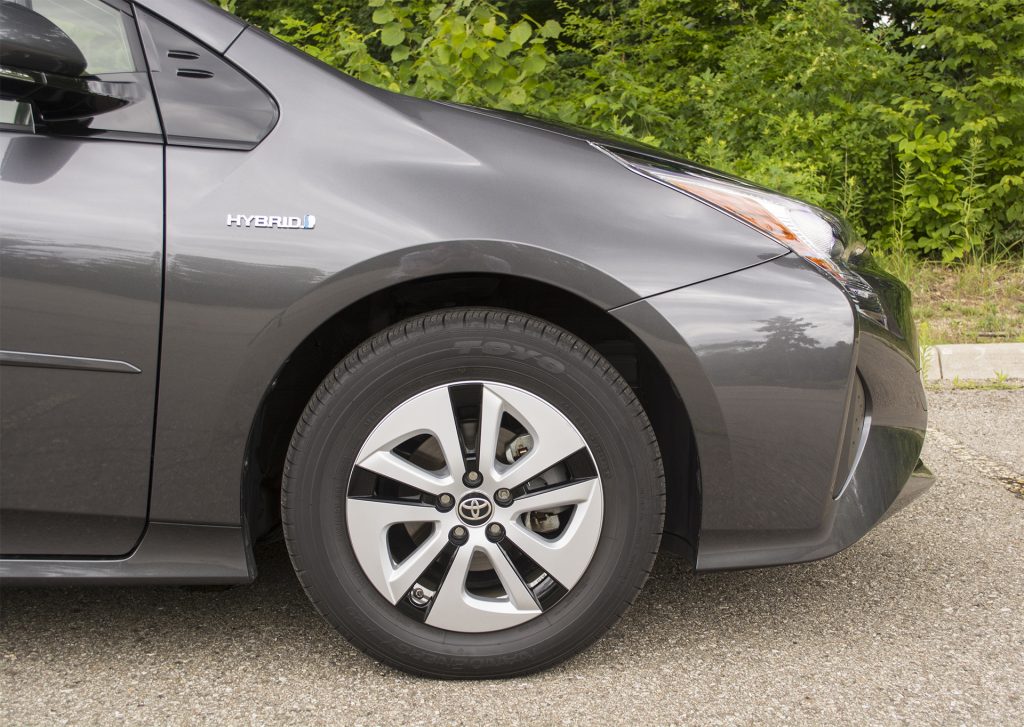 Data is still being gathered on reliability for the 2016 Prius. But we wouldn't be surprised if the new model follows in the footsteps of the last-generation Prius. Both J.D. Power and Consumer Reports say the last-generation model had excellent reliability. In terms of Initial Quality Rating, the Prius doesn't do so great. J.D. Power says Prius scores well when it comes to the powertrain and other mechanical bits. Where it falters is in the design of the interior and certain features.

If you want a safe hybrid, look no further than the Toyota Prius. Both the National Highway Traffic Safety Administration and Insurance Institute for Highway Safety have given the Prius their highest honors: 5-Star Overall Rating and Top Safety Pick Plus.

All Prius models feature a full set of airbags including a knee airbag for the driver; stability and traction control; and a backup camera. The Prius Three Touring and Four Touring get Toyota Safety Sense package that includes pre-collision braking with pedestrian braking, lane departure alert with steering assist (the vehicle will take control of the steering to bring back into the lane if it detects the driver isn't taking any action), radar cruise control, and automatic high beams. This package is available for the Prius Three and Four through the Advanced Technology Package. Blind spot monitoring with rear-cross traffic alert comes standard on the Prius Four and Four Touring. Oddly, this feature isn't available as an option for other Prius trims. 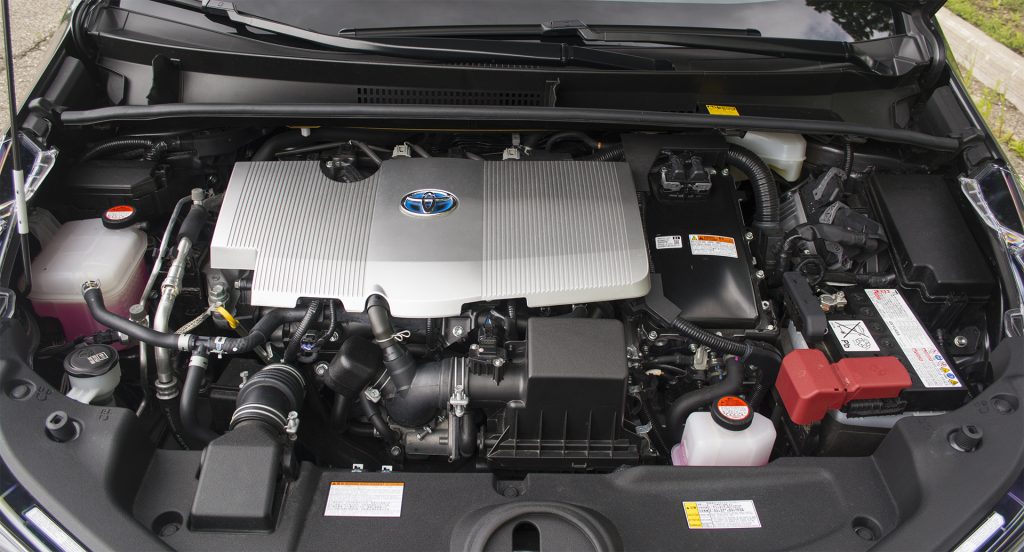 The Prius' hybrid powertrain is made up a 1.8L Atkinson-Cycle four-cylinder engine and two electric motors/generators. Total output stands at 121 horsepower and 105 pound-feet of torque. A continuously-variable transmission routes power to the front wheels. The base Prius Two sticks with a nickel-metal hydride battery, while higher trims get a compact lithium-ion battery pack.

The low power numbers mean you will not be winning any drag races at the intersection. It also means that you'll need to plan how you're going to merge onto an expressway or making a pass. Around town is a different story as the Prius has enough punch to keep up with city traffic. One thing that has changed from the previous-generation model is how far the vehicle will run on just electricity alone. Keep a light a foot and you'll be able to travel a good distance on only just the battery. The CVT, for the most part, is behaved, except during times of hard acceleration where the dreaded drone comes in.

A common complaint about previous Prius models has been the handling. There was an abundance of body roll around corners and the steering felt like you were stretching a rubber band. The new Prius is a huge leap forward in this department. A lot of credit needs to go to the Toyota New Global Architecture (TGNA) that debuted on the Prius and will appear in future Toyota models. TGNA introduces a new chassis design and a lower center of gravity for the Prius. The difference is very apparent as the Prius doesn't show any sign of body roll. Steering has some decent weight and feels more accurate. One area the Prius is still struggling with are the regenerative brakes. For an automaker that has a lot of experience with building hybrid vehicles, Toyota still cannot seem to get rid of the vague feeling in the brake pedal that has been present in the Prius for a number of years.

When it comes to rough roads, the Prius does quite well. Bumps and imperfections are ironed out. Noise isolation is a mixed bag. Wind noise is mostly nonexistent. Road noise is somewhat apparent thanks to the low-rolling resistance tires and not much sound deadening being used for the floor. 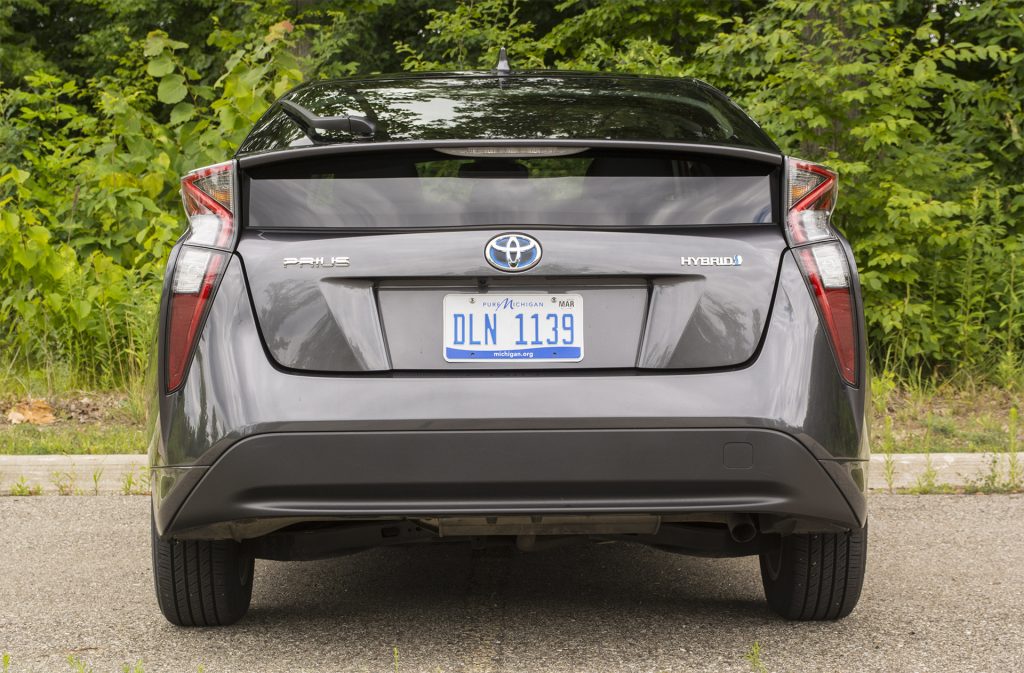 The 2016 Toyota Prius starts at $24,200 for the base Two and climbs to $30,000 for the top Four Touring trim. Our Prius Three tester starts at $26,250 and with a few options comes to an as-tested of $29,842. For most buyers, we think the Three is the sweet spot as you can equip the Advanced Technology package that includes the Toyota Safety Sense package, along with a color heads-up display and sunroof. This will cost slightly more than the Three Touring ($28,100) which comes with the Toyota Safety Sense package as standard. But the Three Touring doesn't get the heads-up display or sunroof as options. 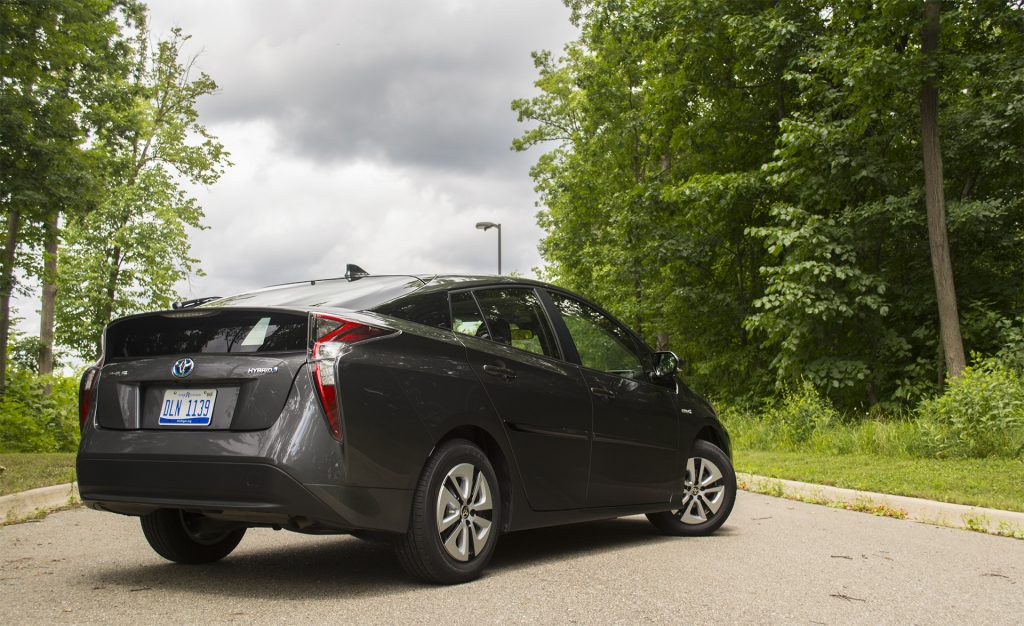 There isn't a true competitor to the Prius at the present moment. The Honda Insight which was the closest was axed after the 2014 model year due to poor sales. It really comes down to what your needs are. If you need a bit more space for passengers or cargo, then the Toyota Camry Hybrid or Hyundai Sonata Hybrid deserve a look. If you're wanting a plug-in hybrid, the Chevrolet Volt is very impressive. Plus, Toyota will be launching a plug-in version of the Prius called the Prius Prime in the near future.

Toyota could have just rested on their laurels and just phone in a redesign of the Prius. But they didn't and it shows. The fourth-generation Prius builds upon the hybrid technology and impressive fuel economy. Plus, Toyota has made considerable improvements in the handling and interior. There is a reason that the Prius is used a benchmark for all other hybrids and it looks to continue that with the 2016 model.