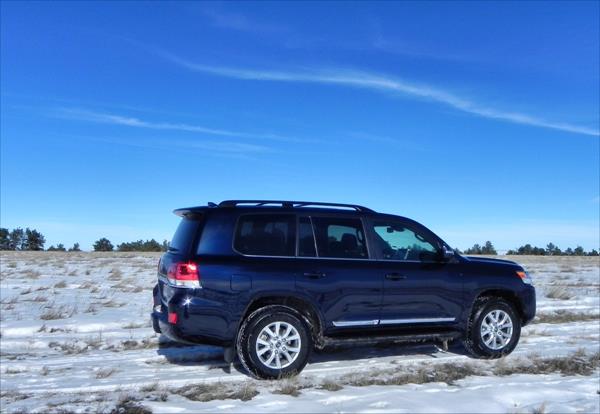 Overview (Final Score: A-)
The 2016 Toyota Land Cruiser is all new for this model year, with a host of changes to the venerable and well-loved Cruiser meaning that some may be disappointed while others will be overjoyed.

Major upgrades to the Land Cruiser start with its heavily updated exterior styling, making it more contemporary in appearance. Under the hood, a well-known V8 engine powers the beast through a new eight-speed automatic transmission. A host of new safety technologies and features are now included and the Land Cruiser's infotainment and entertainment options inside all get major upgrades.

The 2016 Land Cruiser features a well-mannered on-road drive and all the legendary prowess off the road that the Cruiser name is known for.


What We Loved About the 2016 Toyota Land Cruiser


What We Didn't Love About the 2016 Toyota Land Cruiser 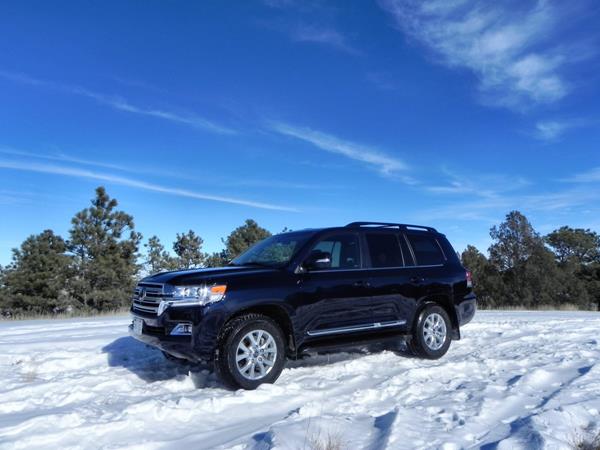 Exterior View (8/10 relative to market)
The Land Cruiser has morphed considerably over the years. Today's Land Cruiser is much more contemporary, with a design and build very similar to siblings in the Toyota product line. A look at the Lexus GX 460 and the Toyota Sequoia shows a near-mirror similarity in design. The Toyota Land Cruiser has a more robust front fascia, of course, and most of its differences are under the skin.

Although all three vehicles look very similar, that doesn't mean the look isn't a good one. The 2016 Land Cruiser is a handsome truck with a smooth appearance that is at home both shuttling kids to the soccer field and climbing into the wilderness for adventure. Although the African Safari appeal the Land Cruiser carries with its heritage is now gone, it's been replaced with a more modern look.


Interior Comfort, Quality, Ergonomics (8/10)
The 2016 Toyota Land Cruiser has a well-designed cabin with a host of quality materials throughout. The seating is comfortable in the first and second rows, with seating heating as standard. The third row is mostly for children and occasional use, as with most SUVs in this class. We do like the Toyota Land Cruiser's well-designed driver's cockpit and the slide/recline second row seating in a 40/20/40 split. 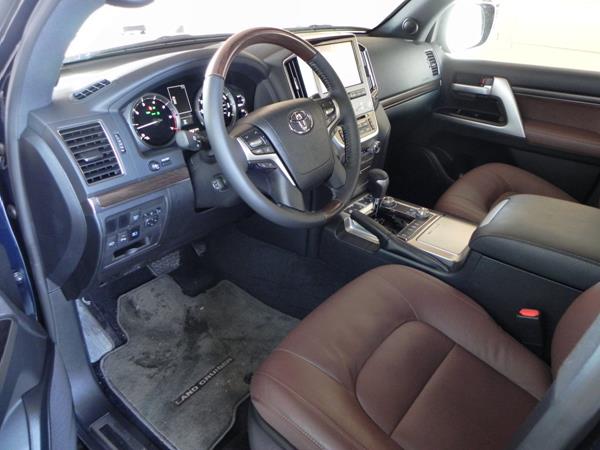 Cargo space is limited, compared to the competition, mainly due to the way the third row folds to accommodate the heavier-duty offroad underpinnings the Land Cruiser includes. The third row seats fold down and then over and up to the sides in a fashion that will be familiar to those who have tried the Lexus LX 570. The two-piece tailgate and hatch will also be familiar in that regard. The rear hatch lifts up to allow access to the Land Cruiser's cargo area, leaving a "lip" of a tailgate behind. That folds down to allow flat-access when required. The rear window glass also opens for fast access to bags and gear without opening the entire hatch.

Those two shortfalls plus the generally lower-rent interior compared to like-priced competitors (most of which are in the luxury segment) mean we've knocked the score of the Land Cruiser a bit.


Technology (9/10)
One area where few can rival the 2016 Toyota Land Cruiser is in technology. The newest Entune suite with apps and infotainment anchor the Cruiser's tech well, showcasing a 9-inch touchscreen. Things like Siri Eyes Free and many useful apps that integrate with a user's phone are available. Most of which are relatively straightforward to use. Qi wireless charging is also standard.

Also standard in the 2016 Land Cruiser is a rear seat entertainment package that offers two flat screens, wireless headphones, and a remote control. Each is independent and can stream music from the stereo, a device, or video from the DVD player or a connected device.

Finally, a muti-view camera system is available for the Land Cruiser that gives useful camera views for parking and offroad maneuvers. 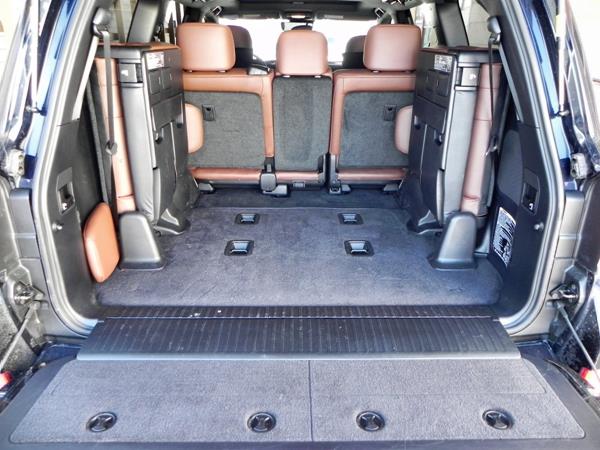 Fuel Economy (7/10)
Fuel economy in the 2016 Toyota Land Cruiser is well below par for the segment at just 15 mpg combined. This is largely due to the weight and additional equipment the Land Cruiser carries as standard - all of which give it the prowess it's so well known for when roads are optional.


Predicted Reliability, Initial Quality Ratings (8/10)
The 2016 Land Cruiser has not been rated for initial quality by groups like J.D. Power and Associates. In the past, however, the Land Cruiser model has enjoyed a highly favorable reputation for durability and long-term reliability, which we believe will carry forward with the new design. There have been no recalls associated with the 2016 Land Cruiser as of this writing.


Safety (810)
Although the 2016 Land Cruiser has not had crash test results published, the large SUV segment as a whole generally scores favorably in those tests and Toyota is particularly good at doing well. A host of safety equipment and standard technologies make the Land Cruiser an easy bet for good safety marks. A new forward collision mitigation system and pedestrian detection system with active braking are jewels in the Land Cruiser's safety crown. 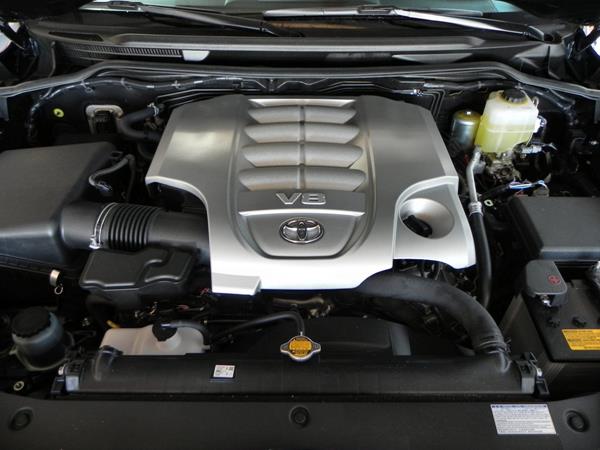 Performance (10/10)
The 2016 Toyota Land Cruiser is powered by a well-vetted 5.7-liter V8 that offers 381 horsepower and 401 pound-feet of torque. An eight-speed automatic transmission is new this year and full-time four-wheel drive is standard. Several offroad-ready built-in components are to be had as well.

A locking center differential, stabilizer bar adjustments through the Kinetic Dynamic Suspension System, and traction control through Multi-Terrain Select are all included. So is a useful five-speed crawl control system and a new Off-Road Turn Assist system which applies braking to the inside tires in a low-speed turn to improve the turning radius. The Land Cruiser is rated to tow up to 8,100 pounds when equipped.

With all of this offroad gadgetry, it would be assumed that on the road, the Land Cruiser is an obnoxious ride. That would be wrong, as the Cruiser has a remarkably forgiving and comfortable feel on the highway and around town. Maneuverability is not a high point, of course, but this is a bulky SUV not a compact car. The engine is forceful and confident, adding to the Land Cruiser's appeal around town and on the road.


Pricing and Value (9/10)
For those who need a seriously capable offroad machine that can also double as a family get-about, the 2016 Toyota Land Cruiser is a perfect option. The included standard equipment, excellent chops off the pavement, and well-done contemporary look mean that we value the Land Cruiser highly. 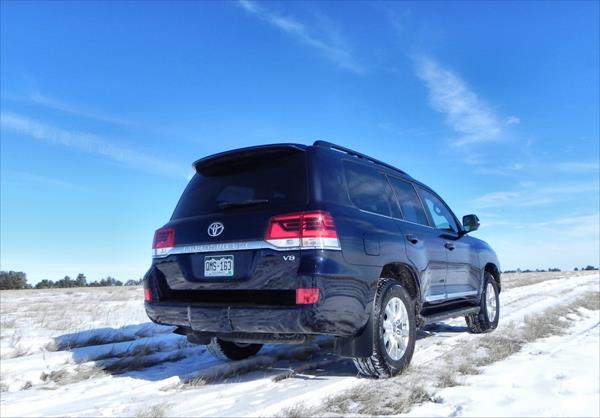 Total Score and Competitive Comparison (67/80, 84%)
There are a few competitors to the Land Cruiser, but nearly all of them are in the luxury category due to the Cruiser's price point. The most direct competitor is Toyota's own Lexus GX 460, which is priced about the same and has a very similar look and feel. The Land Cruiser includes some equipment not available for the GX, but unless you're a serious offroad enthusiast, you won't likely notice the difference and the GX has a nicer interior and better third row offering. More competition is also found from the Land Rover LR4, which is a solid contender against the Land Cruiser on all fronts.

All told, however, we really like the 2016 Land Cruiser for its excellence off the road, which doesn't disappoint those who know the model's history, and its high amount of interior accoutrements for the segment. For a specific set of buyers, the 2016 Toyota Land Cruiser is an excellent choice.