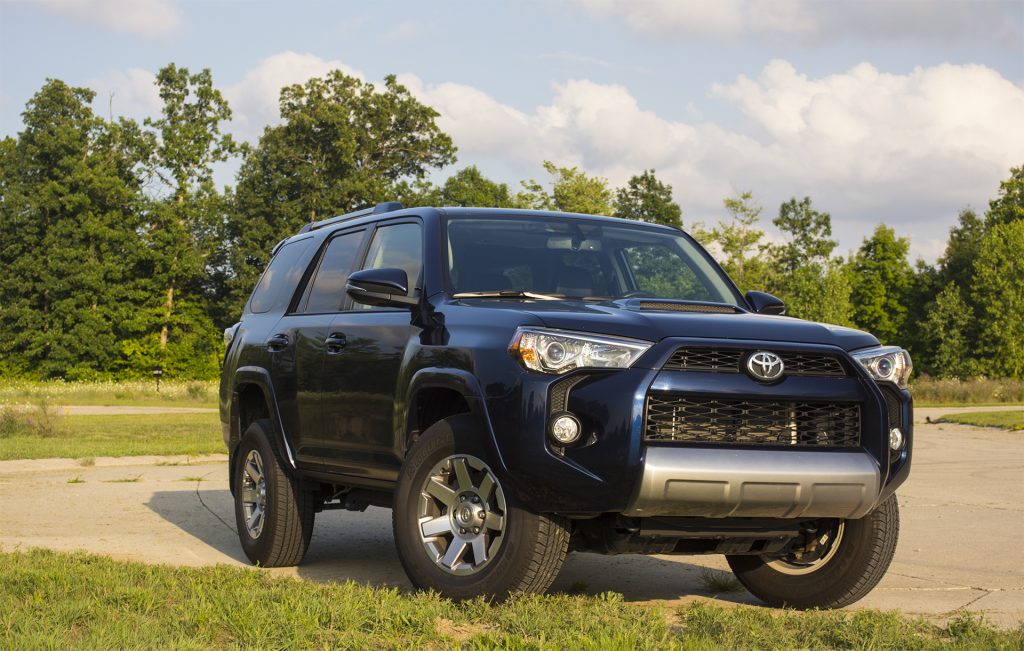 Off-road SUVs are becoming an endangered species. Crossovers are now taking over the role they once held, with better fuel economy and ride characteristics. But there are still those who need a vehicle that can get them to that special place out in the woods or out on an adventure. A crossover isn't built for that. This is where an SUV shines, as it was built with this task in mind. Toyota is one of the automakers who still builds a true SUV in the form of the 2016 4Runner.


What We Love About the Toyota 4Runner:


What We Don't Love About the Toyota 4Runner: 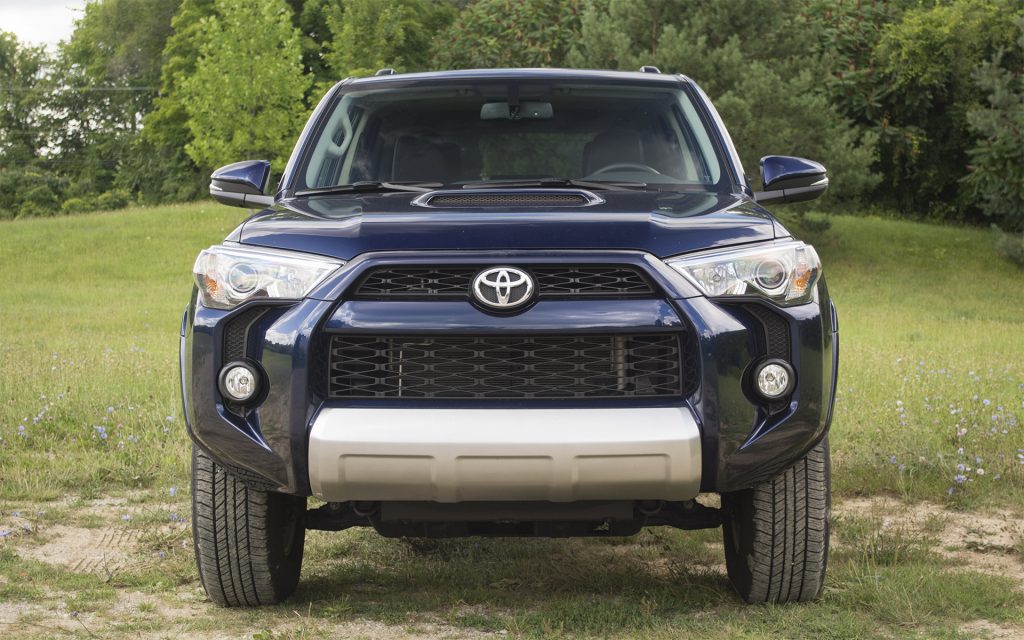 One look at the Toyota 4Runner and you can easily surmise that it's ready to go off-road at a moment's notice. The aggressive front end boasts a chunky bumper, skid plate and an angular surround from the grille. Certain 4Runner trims will come with a hood scoop.

The side profile reveals a boxy outline with flared-out wheel fenders and a fair amount of glass. Wheels range in size from 17 to 20-inches. Around back is an aggressive rear bumper and a tailgate with a rear window that can be raised or lowered, a trademark of the 4Runner since the 80's. 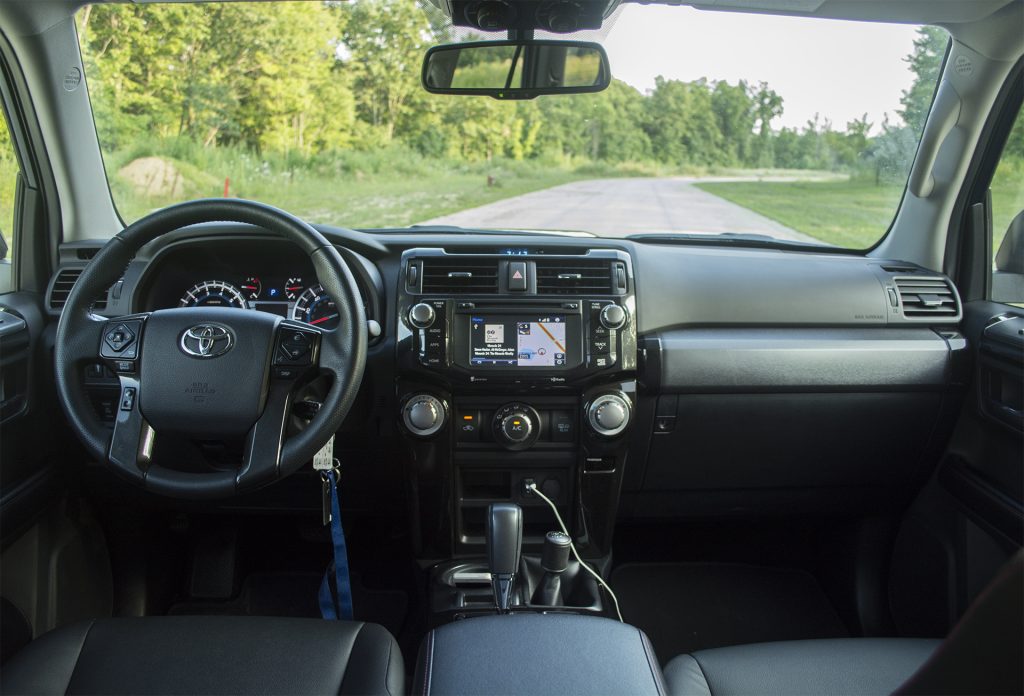 The 4Runner's interior shares the rugged ideals of the exterior. A blocky design for the dash is complemented by chunky knobs and large buttons. The control layout is easy to understand and use at a glance. Materials used in the 4Runner were picked for durability, not aesthetics. This means you'll find a lot of hard plastic throughout the cabin.

Our 4Runner Trail Premium tester featured Toyota's SofTex upholstery and power adjustments for the front seats. Opinion on the SofTex is mixed, as some thought it was leather while others didn't like the texture or feel of it.

Getting comfortable is easy thanks to the power adjustments and the driver getting a tilt-and-telescoping steering wheel. Most 4Runners, like our tester, feature seating for five, but you can option a third-row to increase seating to seven. The third-row is best reserved for small kids due to a minuscule amount of legroom.

Move up to the second row and there is enough head and legroom for an adult. Where the 4Runner really shines is in cargo space. Open the tailgate and you have 47.2 cubic feet behind the rear seats. Fold the second-row and space increases to almost 90 cubic feet. If you have the third-row option, space decreases to 9 cubic feet when all the rows are up. 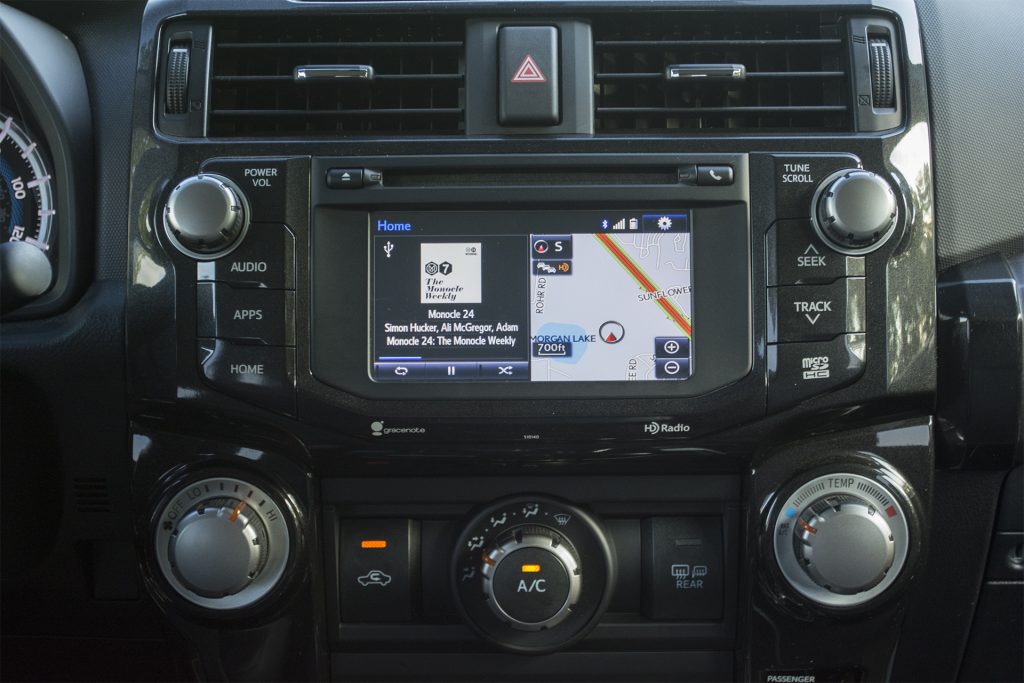 All 4Runner models get a 6.1-inch touchscreen with Toyota's Entune infotainment system. Navigation comes standard on SR5 Premium, Trail Premium, and above. We like Entune as it features one of the easiest to understand interfaces and provide the ability to use smartphone apps through the system. We're not keen on the small screen, as it is very easy to hit the wrong button on the touchscreen. The small size makes it hard to read at a quick glance. Bluetooth is standard across the range.

If you want an SUV to stand the test of time, you can't go wrong with the Toyota 4Runner. Consumer Reports and J.D. Power reports that 4Runner has an excellent reliability record. In J.D. Power's initial quality study, the 2016 4Runner earned an above average rating. 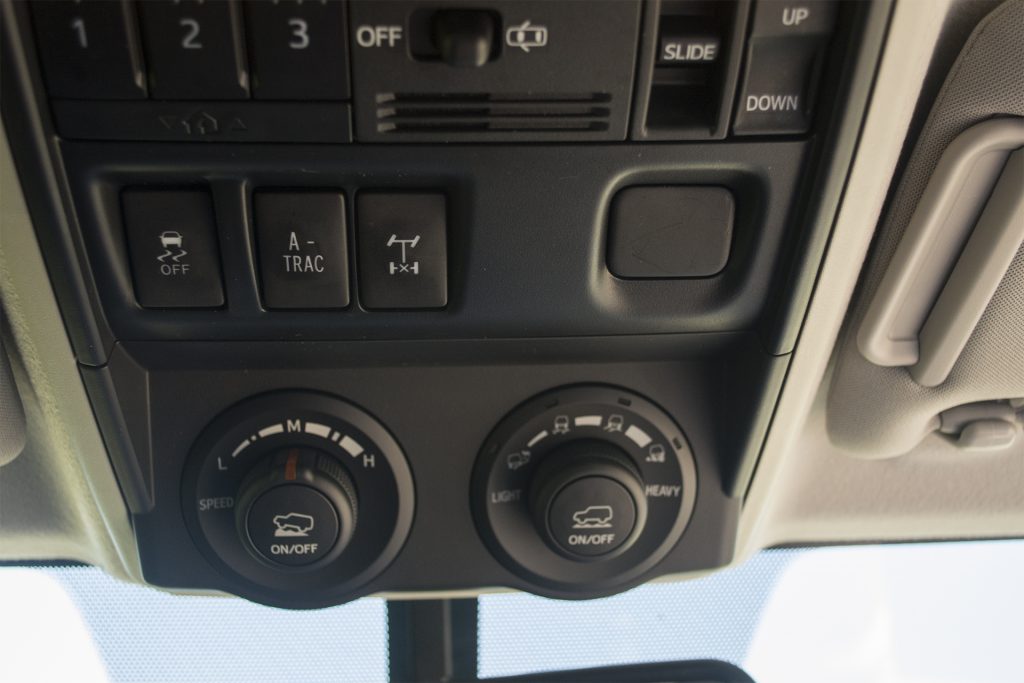 All 4Runner models come equipped with a full set of airbags, active front head restraints, traction control, stability control and a backup camera. Opt for a 4-wheel drive model and you'll get an off-road traction control system known as A-Trac. This system redirects engine torque to the wheel(s) that have traction to help keep the vehicle moving in slippery conditions.

The Toyota 4Runner did well in the National Highway Traffic Safety Administration tests with an overall rating of four stars. The Insurance Institute for Highway Safety awarded the 4Runner the highest rating of "Good" in most of their tests. The 4Runner stumbled in the new Small Overlap Front crash test where it earned the second-lowest rating of "Marginal." 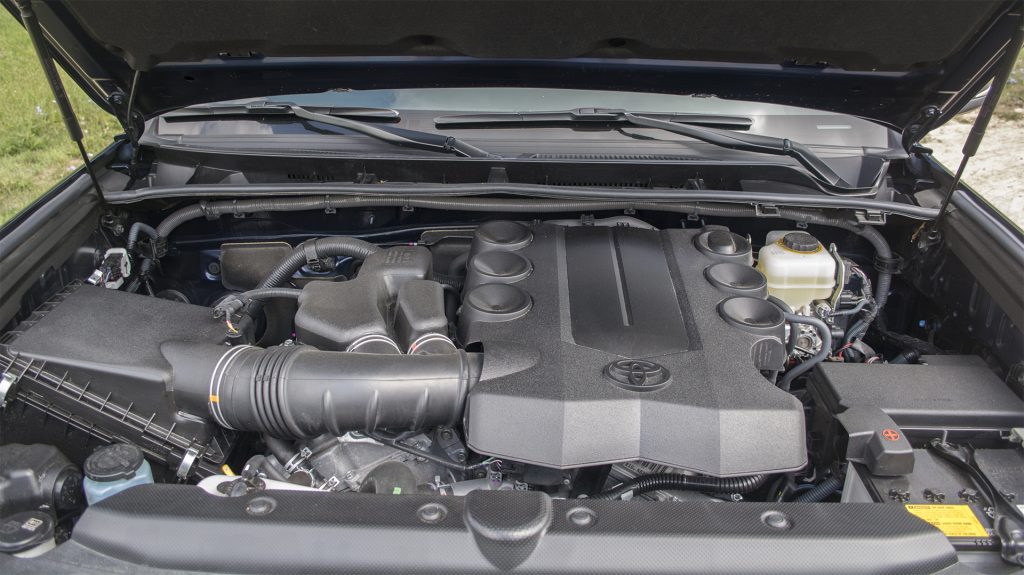 Toyota only offers one engine and transmission for the 4Runner; a 4.0L V6 and a 5-speed automatic. The V6 produces 270 horsepower and 278 pound-feet of torque. The base SR5 and top Limited trims have the choice of either 2-wheel or 4-wheel drive. The Trail and TRD Pro only come with 4-wheel drive.

The power figures may suggest the 4Runner's V6 provides enough grunt. But it is a different story out on the road. Power delivery in the V6 is adequate around town. But when it comes making a pass or merging onto a freeway, the engine struggles. It seems to produce more noise than actual power in these situations. The 5-speed automatic provides smooth and smart shifts, but an extra gear would not be a bad thing. It would drop the engine RPM during highway driving and improve overall fuel economy.

The 4Runner's suspension does a decent job of masking bumps at low speeds. Higher speeds make the 4Runner's ride feel bouncy. Taking a corner at a moderate pace will result in a fair amount of body lean. Steering isn't the most communicative and is feels very heavy, making even simple tasks such as parking feel like a chore. Brakes are somewhat disconcerting as the pedal has a spongy feel when you first step on it. The brakes will begin to bite the further you press on the pedal.

Unfortunately, we didn't get the chance to take the 4Runner off-road. This is a shame since it would have put the 4Runner in a better light. Most 4Runners equipped with 4-wheel drive will come with a part-time transfer case and hill-start assist and hill-descent control. The Limited is the only model to offer a full-time 4-wheel drive system.

The Trail adds a lot more off-road goodies such as a locking rear differential, Crawl Control (low-speed cruise control that allows you to traverse rocky terrain), Multi-Terrain Select (alters throttle and traction control settings on various terrains), and the Kinetic Dynamic Suspension System (adjusts the suspension to allow for more wheel travel when off-roading). If you happen to be serious about off-roading, check out the TRD Pro as it includes all of the goodies from the Trail and adds new shocks, springs and a set of off-road tires and wheels. 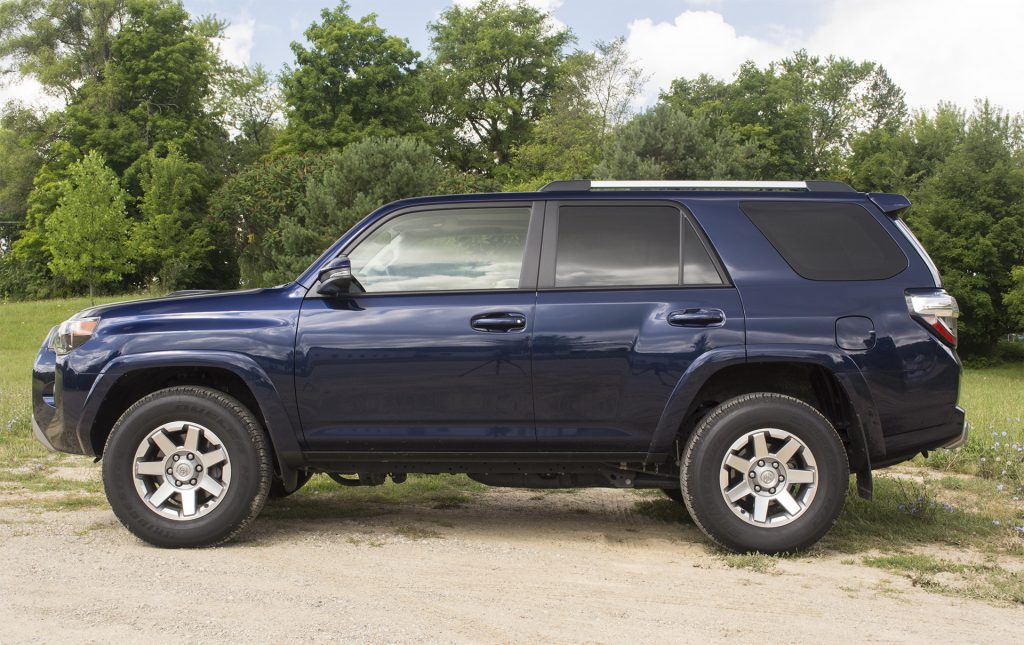 The 2016 Toyota 4Runner begins at $34,795 for the base SR5 2-wheel drive model and climbs to $44,300 for the Limited 4-wheel drive. Our Trail Premium tester comes with a base price of $39,595. With a few options, our as-tested price came to $40,148. If you're considering a 4Runner, the Trail Premium is what we would recommend as it offers the most features in terms of off-roading and interior for the price. Those who are hardcore off-roaders should check out the TRD Pro, as it includes some features to help you go further. 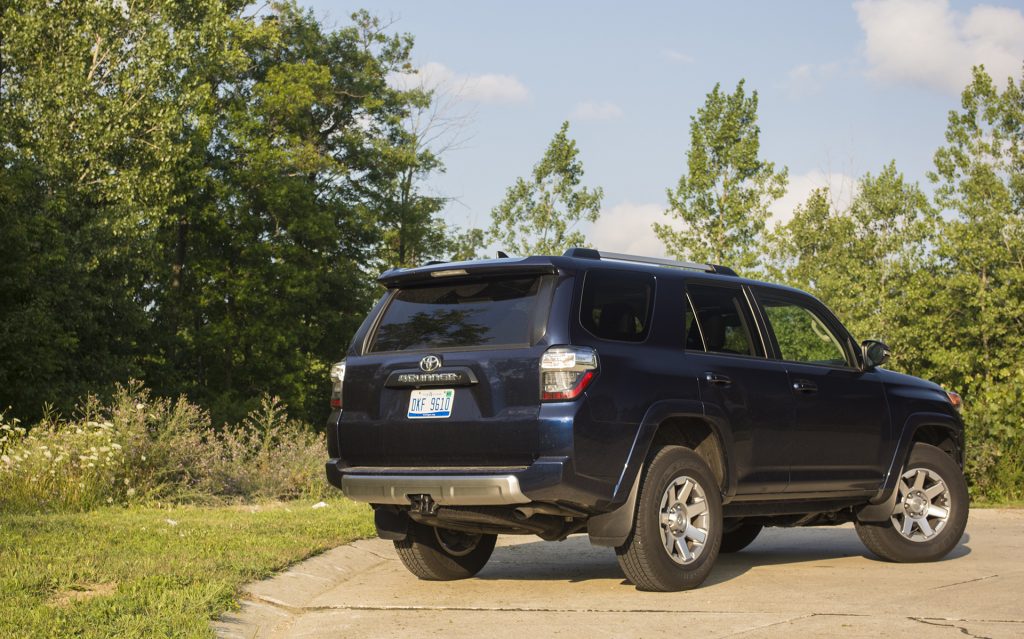 The Jeep Grand Cherokee is the closest competitor to the Toyota 4Runner. It offers the same go-anywhere attitude as the 4Runner with a range of 4-wheel drive systems and other off-road goodies. But the Grand Cherokee offers better on-road manners, nicer interior and the choice of a V6, V6 diesel and V8. Where the 4Runner has an edge over the Grand Cherokee is in terms of reliability. If you aren't planning to go off-road, there are a number of crossovers that provide a better ride and fuel economy over the 4Runner.

The Toyota 4Runner is an old-school SUV. This means it can go anywhere without showing any sign of sweat. But it also means a number of downsides such as poor fuel economy and questionable handling. The only way we recommend a 4Runner to someone is if you planning to go off the beaten path a fair amount of time. If not, there are a number of other vehicles that can do a better job.